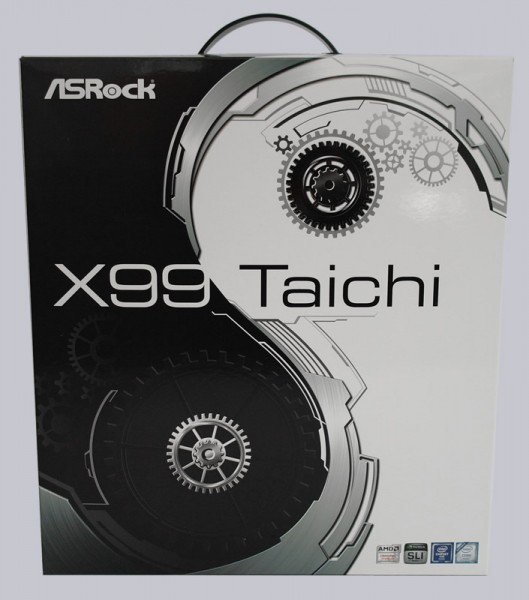 The back of the package shows a lot of features of the ASRock high-end motherboard, like WiFi 802.11ac, two Teaming capable LAN Ports and much more. 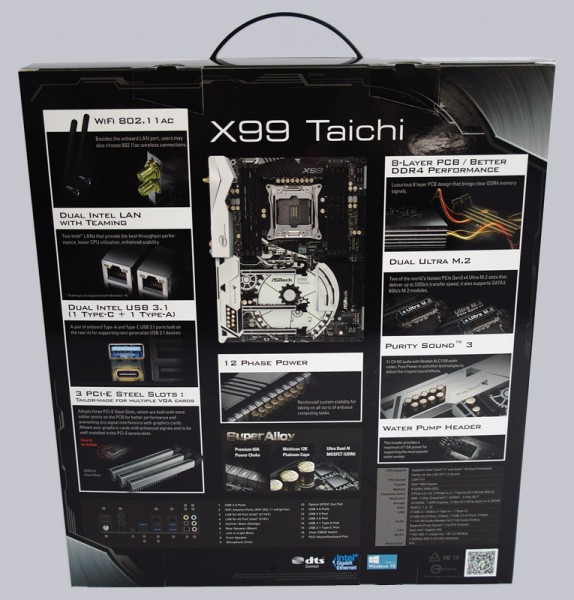 Let us open the box to get a first look at the content. 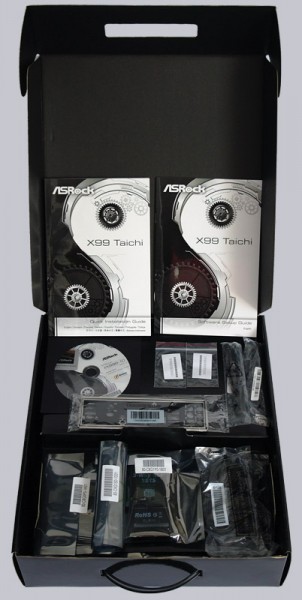 Like other high-quality ASRock motherboards, this motherboard is also wrapped with foam for safe delivery. 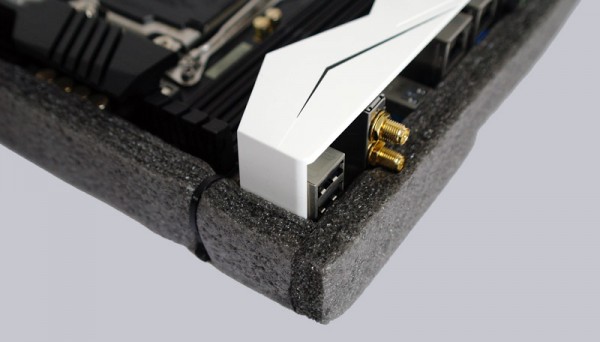 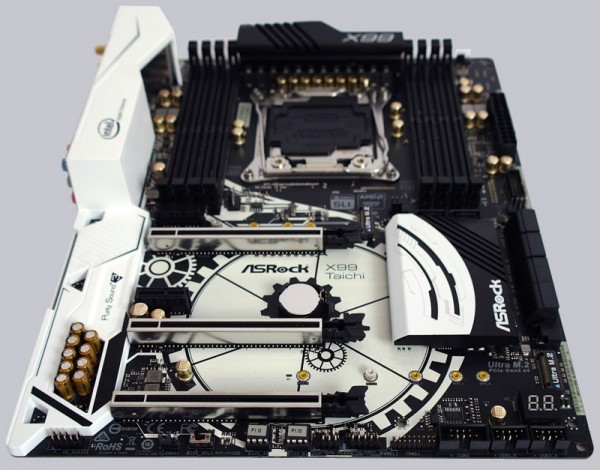 The ASRock X99 Taichi again offers the Dr. Debug 7-segment LED post code display and two fast Ultra M.2 slots for PCIe Gen3 x4 modules with up to 32 GB/s. On the picture you can see the M.2 slot, which can be equipped in addition to conventional 2230/2242/2260/2280 M.2 modules also with up to 22110 length. the two UEFI BIOS ICs with a switch, and two buttons for power and reset. The buttons are of course again LED illuminated. 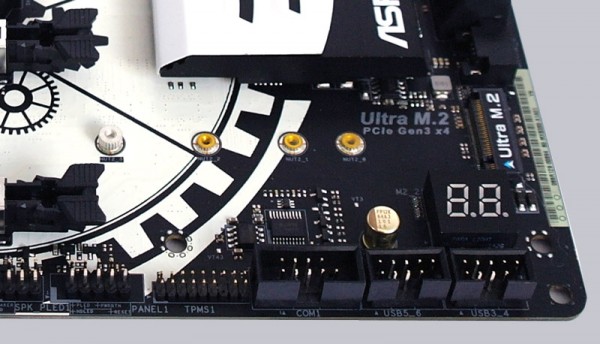 In addition the X99 Taichi has a switch for the selection of the UEFI BIOS ICs. Here you can see the two 128 MB UEFI BIOS ICs with A/B switch, but later more on the UEFI review page.

Here you can see the internal USB3.0 connector, beneath to the high-quality 12K Platinum capacitors and the 24-pin ATX power connector.

Here is a side view of the motherboard with the I/O Panel cover and the large XXL heatsink in aluminum alloy, which is very carefully assembled on MOSFETs and chipset.

Contrary to the LGA1151 Socket, the LGA2011 Socket and this 2011-3 Socket have two levers, to ensure an optimum pressure of the CPU on the socket contacts. 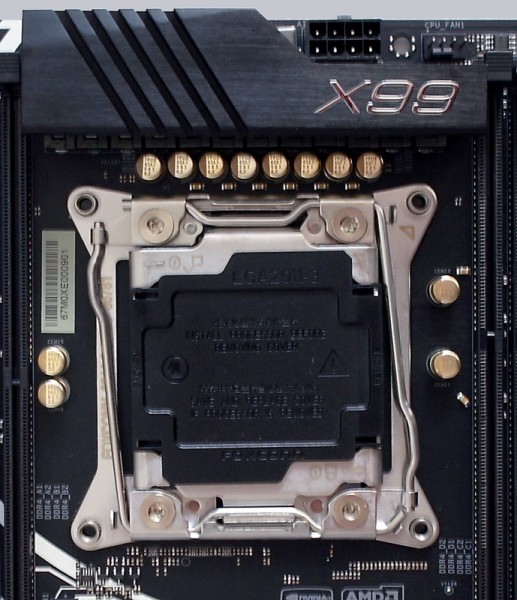 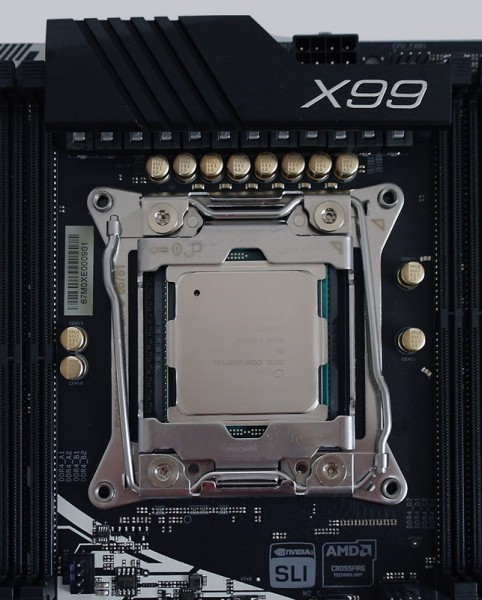 This is how four of eight possible memory modules have to be installed on this X99 motherboard to get quad channel mode support. 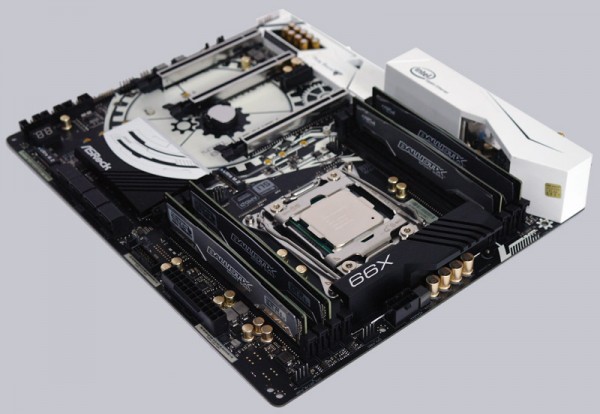 Here is again a top view of the correct memory assembly. 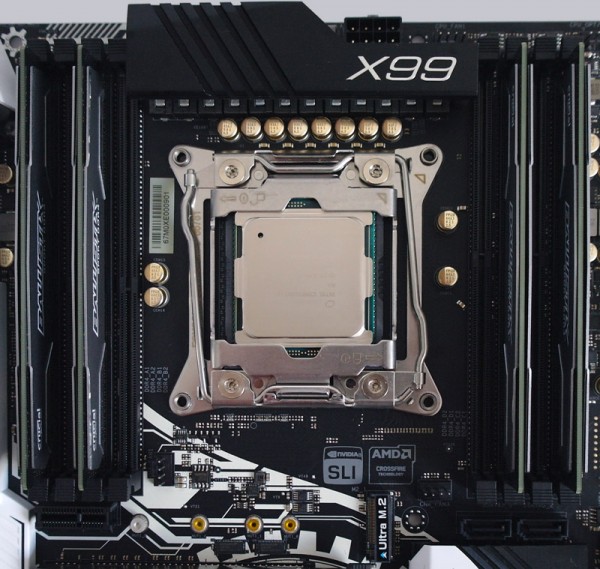 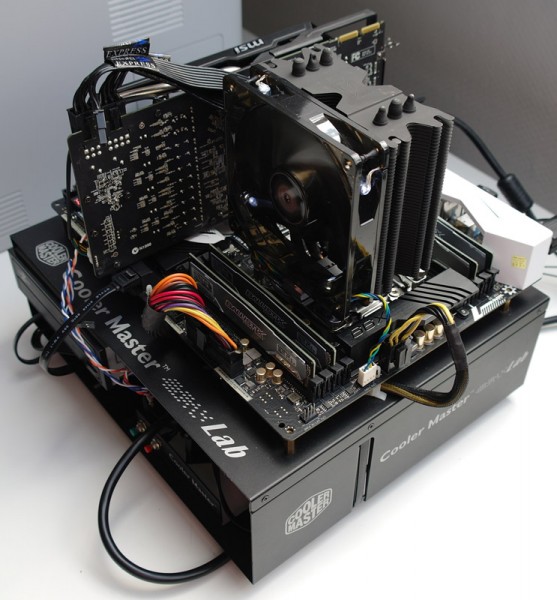 The ASRock X99 Taichi can be equipped with up to eight DDR4 modules and is expandable depending upon operating system used (see list) up to maximally 128GB memory.

Here you can see a picture of the eight DDR4 memory slots with quad channel support, you should install them necessarily first in the slots DDR4_A1, B1, C1 and D1: 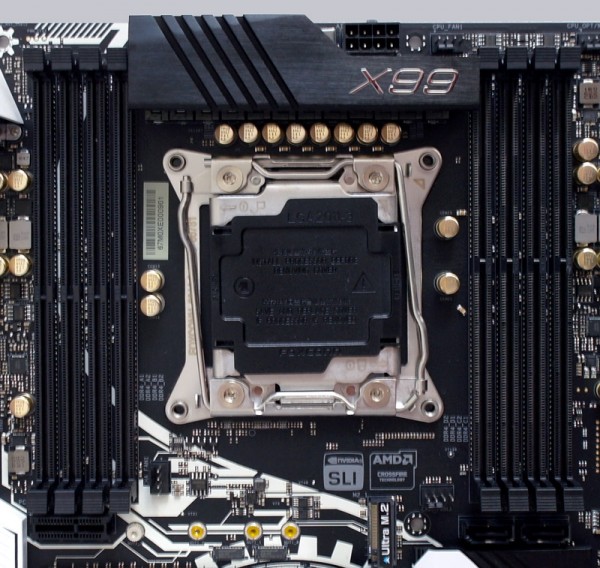 Here you can see the SATA3 ports, whereby you should connect the boot device on SATA3_0: 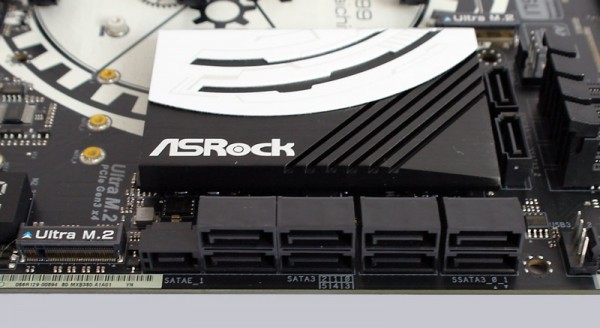 The SATA 3 ports are supporting RAID 0, RAID 1, RAID 5, RAID 10, Intel Rapid Storage Technology 13, NCQ, AHCI and the Hot Plug function in AHCI mode (AHCI stands for Advanced Host Controller Interface and can/should be selected in the UEFI). Thanks to the UEFI BIOS also drives with more than 2 TB for the installation of Windows 10, Windows 8 or Windows 7 x64 can be installed. Installing the drivers was absolutely no problem even with Windows 10 and the Windows 10 installation was done very quickly. 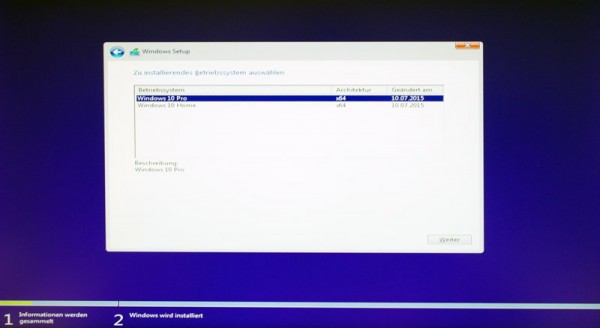 The ASRock X99 Taichi motherboard is equipped with the ALC1150 audio codec with content protection, 115dB SNR DAC, TI NE5532 Premium Headset Amplifier and Purity Sound 3, which supports 7.1 surround sound for example analog over 5x 3.5mm connectors on the ATX panel or over an internal frontpanel audio connector. Additionally, there is an optical SPDIF digital output and premium Blu-Ray audio support. So most users do not need to buy an additional sound card with digital outputs.