Here you can see the mainboard box of the new ASRock X299M Extreme4 Micro ATX motherboard. 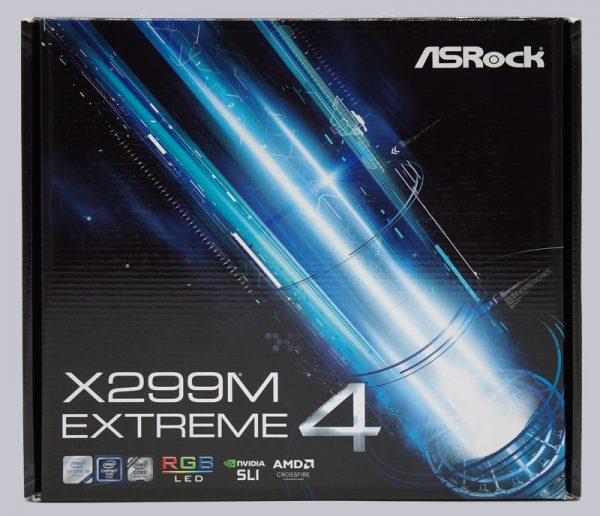 On the back of the package you can see some features like Dual Intel LAN, Dual Ultra M.2, USB 3.1 Gen2, RGB LED, 11 Phase Power and the XXL heatsink as well as the Dual Power connector, which we already know from the ASRock X299 XE motherboards. 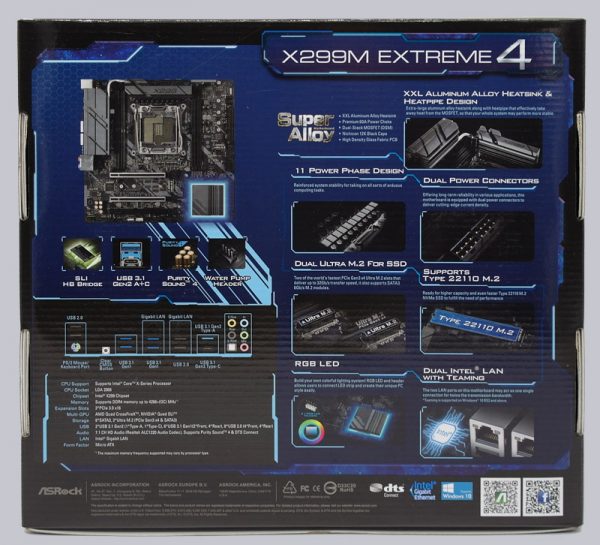 After opening the box we can have a first look at the content. 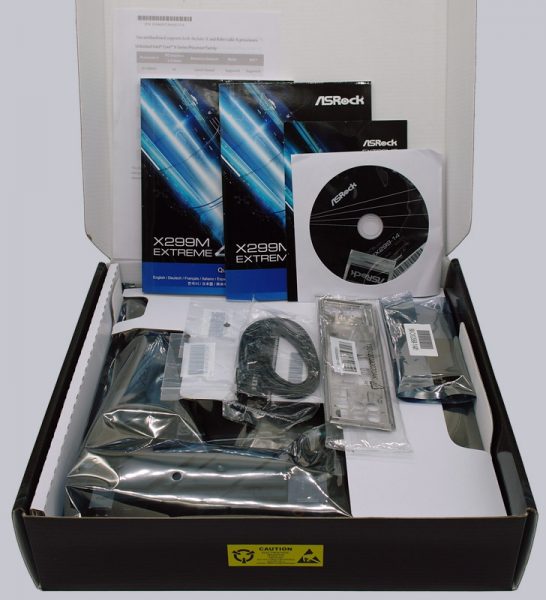 As with most high-quality ASRock motherboards, the X299M Extreme4 has been enclosed in foam for safe transport. 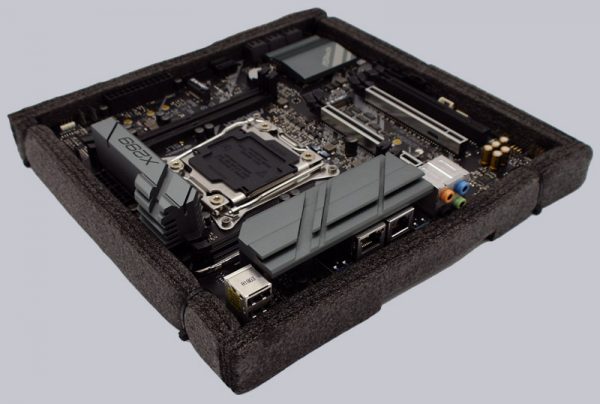 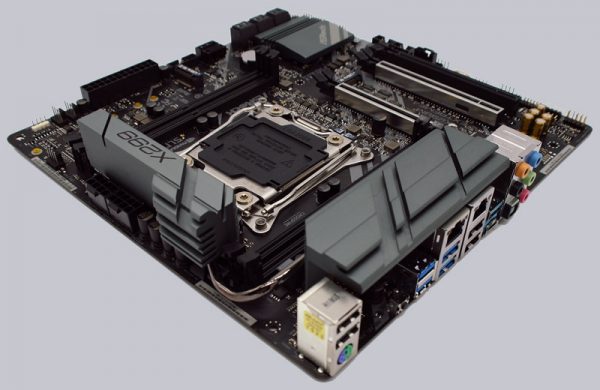 Here you can see another special feature of the X299M Extreme4 motherboard from ASRock, because for the first time it offers a Virtual RAID On CPU Header and a Performance Mode Easy OC Header, where you can connect an OC button, which then clocks up or down by 1-3 multipliers. In addition, an OC LED can be integrated into the chassis, which then displays the performance mode. We tested it and could overclock the CPU in Windows without any problems. We wish that from now on on every ASRock motherboard 🙂 Conventional RGB strips can be connected to the white 4-pin 12V RGB header to illuminate the case, for example. Polychrome cannot yet be addressed individually, RGB strips can be controlled. The X299M Extreme4 even has a second 12V RGB LED connector, just like the large ATX motherboards.

ASRock even has several RGB LEDs integrated under the chipset cooler of the X299M Extreme4, which can be controlled as desired. 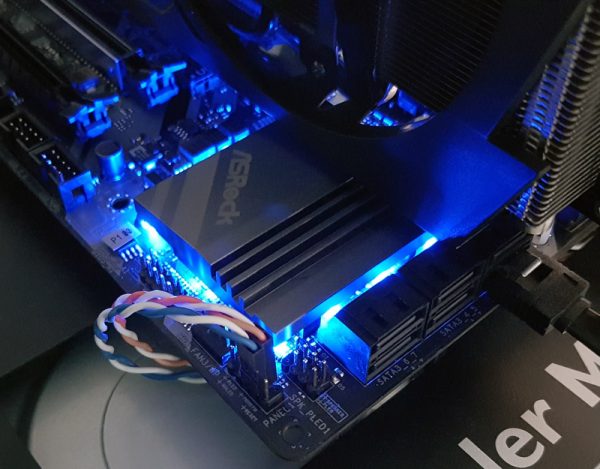 The RGB headers and the integrated RGB LEDs are controlled by the supplied ASRock RGB LED software. Via the UEFI you can make all settings graphically as with the other ASRock X299 motherboards. In the ASRock RGB LED software or in the BIOS, for example, you can select the colors in an RGB color selector. In addition, you can set whether the RGB headers are to be controlled separately or together with the RGB lighting under the chipset cooler. And in the ASRock RGB LED menu you can select whether the LEDs should light up continuously, breathe, be controlled randomly or to music. The user has numerous options for how and how fast the LED stripes or the chipset cooler should light up and can also completely deactivate the lighting. 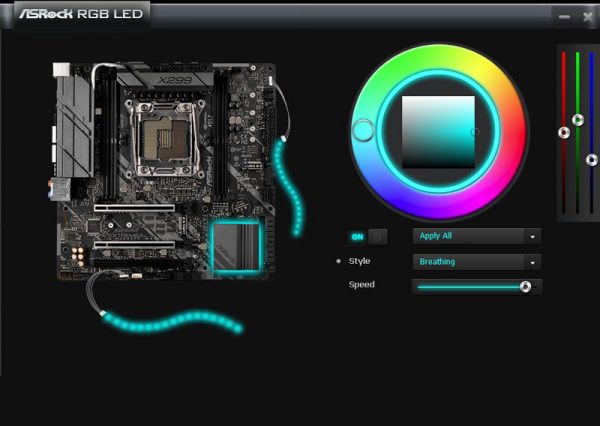 We recently showed how to adjust the RGB LEDs in detail in the ASRock X399M Taichi UEFI Setup Video Tutorial on our OCinside YouTube Channel.

Here you can see the internal USB 3.0 or USB3.1 Gen1 connector, the long Ultra M.2 port, the 24-pin Micro ATX power connector, some of the high-quality Nichicon 12K Black Caps capacitors, three of the five 4-pin fan connectors and the second RGB header.

The picture shows the side view of the motherboard with the large XXL aluminium alloy heat sink carefully mounted on the MOSFETs. How cooling works is shown below by the ASRock X299M Extreme4 thermal images.

Like the XE mainboards from ASRock, the ASRock X299M Extreme4 has a second heat sink, which is connected to the heat sink on the voltage regulators by means of a heatpipe. Furthermore, the mainboard has the Dual Power Connector with two 8-pin 12V power supply connectors. 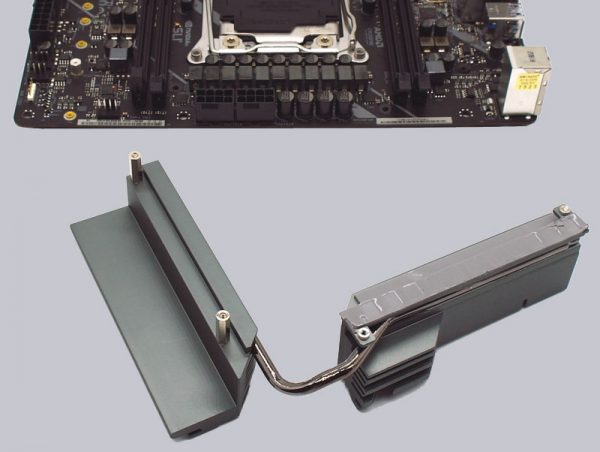 Under the heat sink of the ASRock X299M Extreme4 the so-called Smart Power Stage with a total of 11 MOSFETs together with the Power Chokes are cooled. 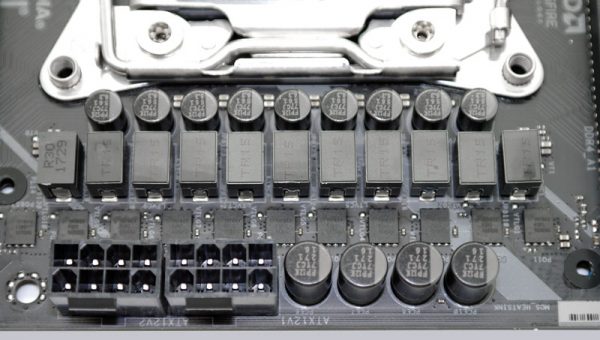 Here you can see two of the MOSFETs that are responsible for a stable power supply. 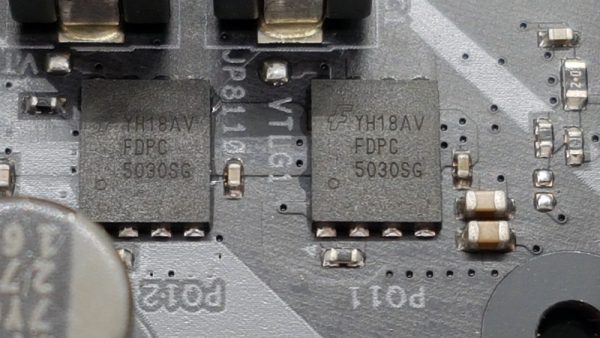 Now we come to the other features of the LGA 2066 motherboard. The X299M Extreme4 motherboard from ASRock included a manual, a software setup guide, a DVD, two SATA data cables (angled and straight), an ASRock SLI_HB_Bridge_1S card, two screws for the M.2 socket and a Micro ATX I/O panel. Additional USB slot covers or an ASRock USB 3.0 front panel are optionally available. 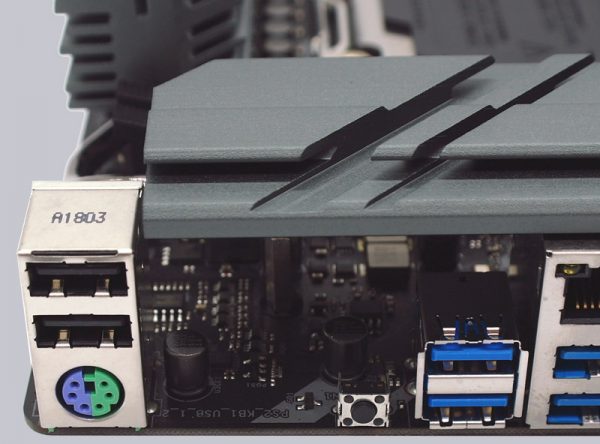 The ASRock X299M Extreme4 board can be equipped with up to four DDR4 modules and can be upgraded depending on the operating system used (see list) up to a maximum of 64 GB RAM. Here you can see a picture of the four DDR4 memory slots with Quad Channel Support. 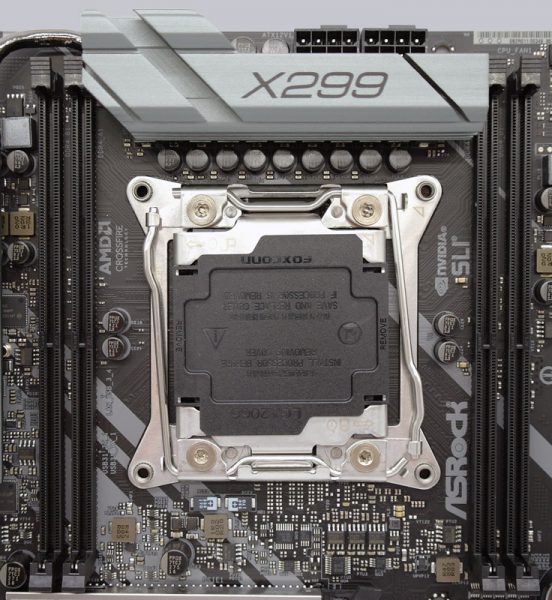 The Intel LGA 2066 motherboard supports DDR4 memory modules and can be optimized in the BIOS with a Skylake-X processor for DDR4-2666 quad channel modules. The UEFI still offers adjustments from DDR4-1200 up to DDR4-4400.

Thanks to XMP support (Extreme Memory Profile), XMP memory modules are set correctly with a mouse click in UEFI and there are of course many more memory adjustments or even more OC options, but more about this later. Which exact RAM modules are officially supported, one should read before the purchase on the ASRock memory support page.

The SATA3 ports support RAID 0, RAID 1, RAID 10, NCQ, AHCI and the Hot Plug function in AHCI mode (AHCI stands for Advanced Host Controller Interface and should be selected especially for SSDs in UEFI). Thanks to UEFI BIOS, drives with more than 2TB can also be used for the installation of Windows 10, Windows 8.1 Windows 7 x64. The installation of the drivers ran without problems in Windows 10, so that the Windows 10 installation was quickly completed. But even Windows 7 could still be installed without any problems.

The RAID drivers can be installed via the Easy RAID Installer point in the UEFI. The drivers for 32-bit / 64-bit Windows 7, Windows 8 and Windows 10 are delivered on DVD and are also available for download on the ASRock support page, whereby the Windows 10 installation is currently preferred. 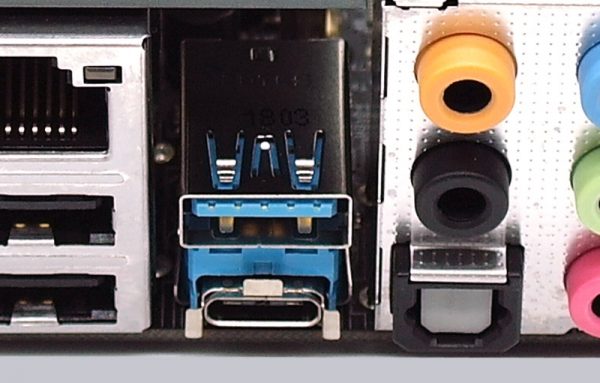 Internally, two USB 2.0 ports for up to four optional USB ports and an USB 3.0 header for up to two optional USB 3.0 ports (USB 3.1 Gen1) are available. The 20-pin header can be connected either to an optionally available USB3.0 front panel or to a case with USB3.0 support.

The ASRock X299M Extreme4 is also equipped with an Intel I211AT and an Intel I219V, via which the 10/100/1000 network ports on the Micro ATX panel are realized. The LAN ports are WoL capable, provide LAN cable detection, support power efficient Ethernet according to 802.3az standard, PXE and more. 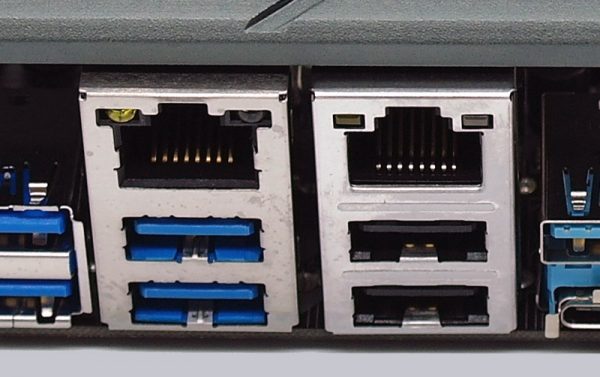 The ASRock X299M Extreme4 motherboard also features the Realtek ALC1220 audio codec with content protection, 120dB SNR DAC, TI NE5532 premium headset amplifier and Purity Sound 4, which supports 7.1 surround sound and outputs it analog via 5x 3.5mm jacks on the Micro ATX panel or via the internal front panel audio connector. Furthermore there is an optical SPDIF digital output and premium Blu-Ray support. This eliminates the need for an additional sound card with digital outputs for most users. 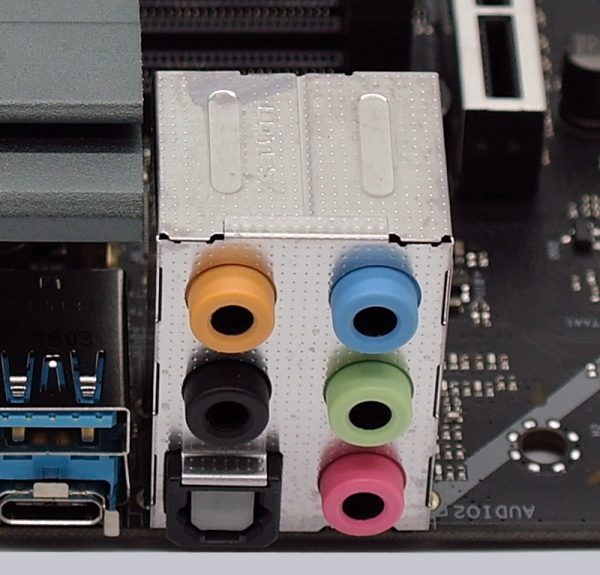 Now we come to the Intel LGA 2066 CPU socket, which we have equipped with an Intel Core i9-7900X CPU. The socket has again been equipped with two brackets, which are operated one after the other to press the CPU evenly onto the pins in the socket. As always, do not touch the contacts or even bend the contacts in the base and be sure always to mount the protective cap on the base during storage or transport. 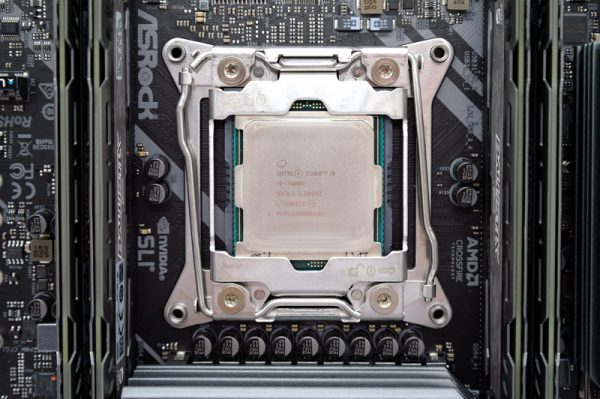 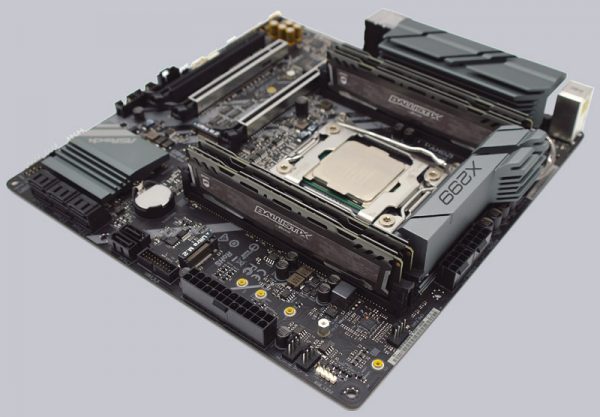 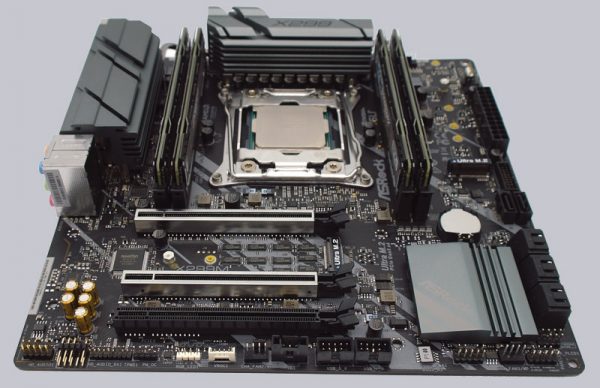 For the previous AMD Threadripper ASRock X399 Taichi motherboard review we ordered the Arctic Freezer 33 TR cooler from ARCTIC, which can be used with Intel LGA 2066 processors as well. 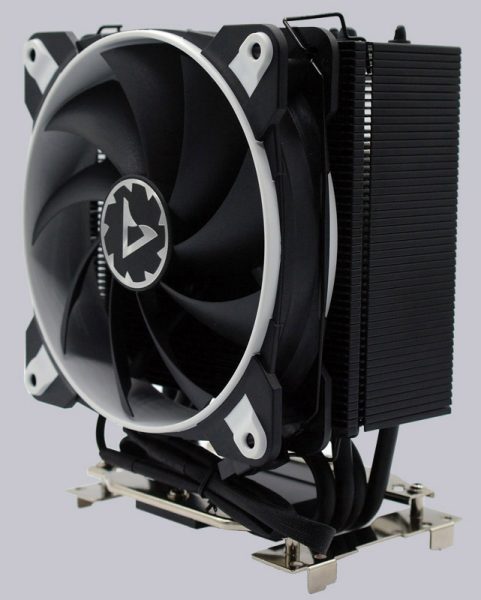 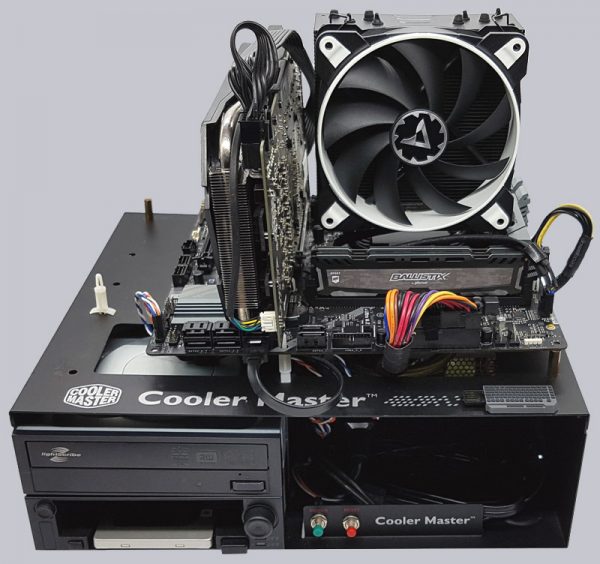 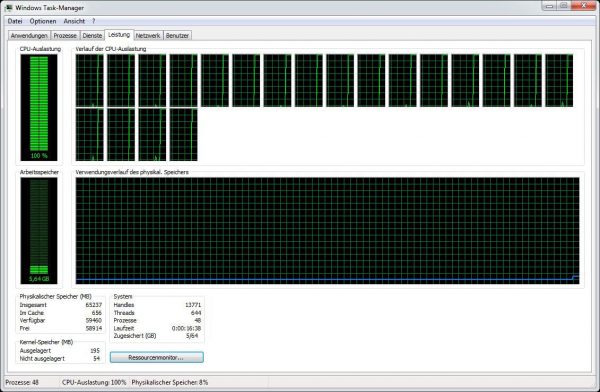 And on the following thermal image you can see the heat distribution of the motherboard. 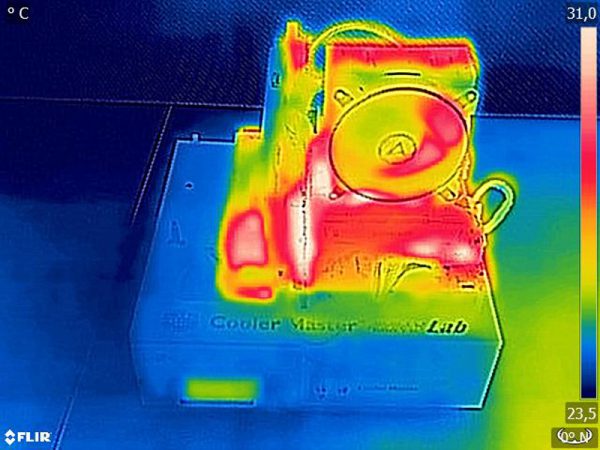 As you can see on the thermal image of the ASRock X299M Extreme4 PC, the heat of the voltage regulators and power chokes is conducted to the second MOSFET heat sink via heatpipe and thus ensures better heat dissipation. During longer loading the temperature is distributed even more clearly. 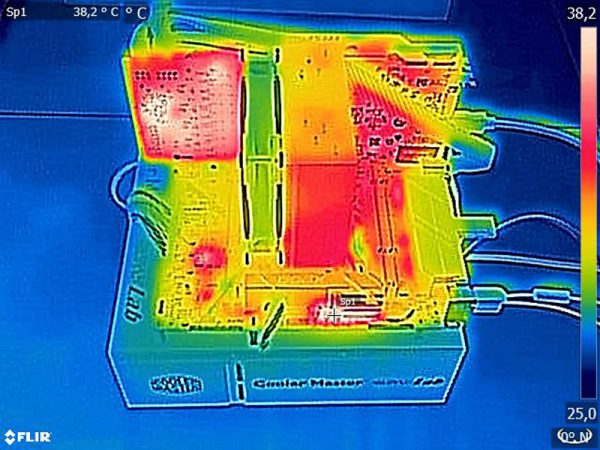