The ASRock Fatal1ty X99M Killer UEFI has a graphical interface that allows intuitive operation with the mouse, or can be operated still as usual with a keyboard.

At the entrance you can see the UEFI version, the installed CPU, the installed DDR4 memory with Quad Channel support, a language selection, and the My Favorite menu item: 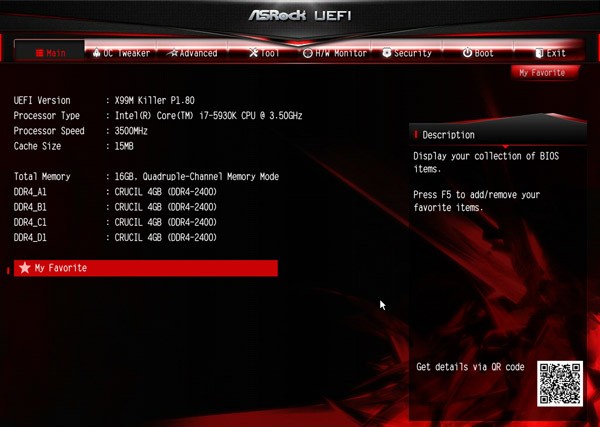 The My Favorite feature is very useful, because you can put here often-needed menu items by simply selecting the respective button, then press F5 and the feature is added to the my favorite overview page. 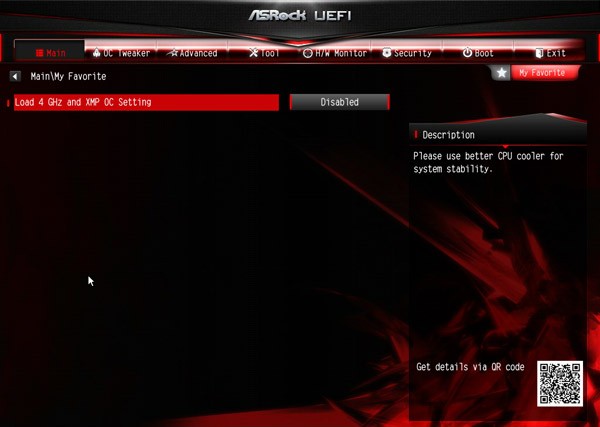 Of course you can also adjust the time and date on the entry page, which is is also graphically selectable in the UEFI. 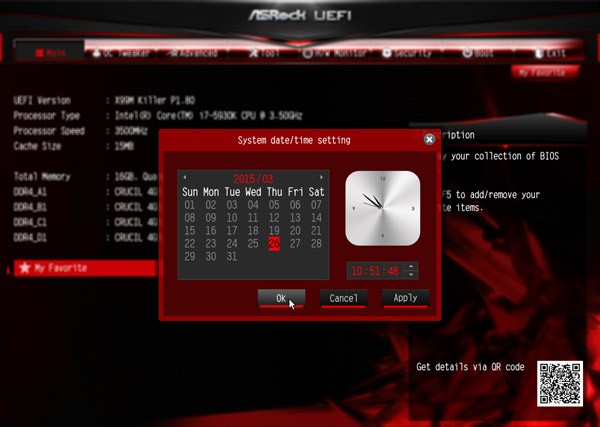 This X99 motherboard also has the selection to view the UEFI in Full HD and offers the Active Page on Entry selection, where you can decide which UEFI page you want to see when you enter the UEFI Setup. This is very helpful mainly for overclocking, since one have to enter the second OC Tweaker menu very often to find the best OC settings. Or one just add all necessary points to the My Favorite overview and start directly to this My Favorite overview page. At the ASRock Fatal1ty X99M Killer you find the Active Page on Entry option and the Full HD UEFI selection now under Advanced. 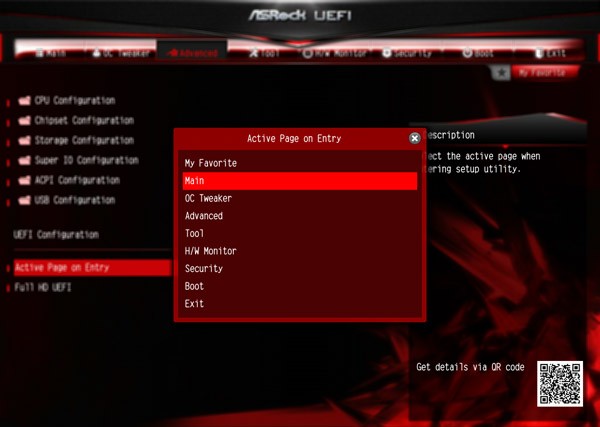 First of all we update the UEFI BIOS to the latest version. ASRock offers several ways to update the BIOS and one very comfortable option to flash BIOS updates is the so-called ASRock Instant Flash or ASRock Internet Flash with direct access to the internet. The motherboard came with BIOS L1.64. At review date, the ASRock UEFI BIOS P1.80 was the latest versions for download. 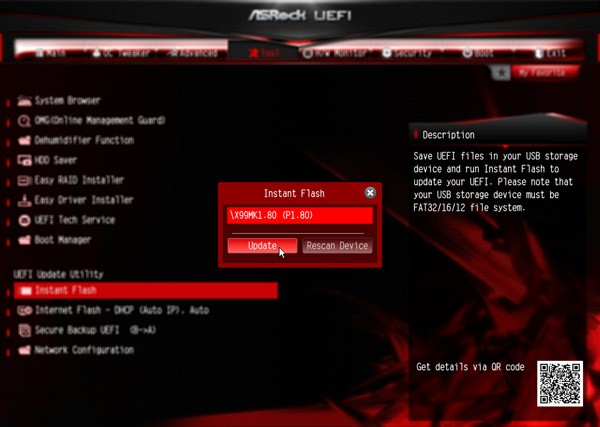 One can enter the ASRock Instant Flash utility in the Tool Screen or by pressing F6 during the PC start. Hereby one can upgrade a downloaded ASRock BIOS without further boot CD, etc. very easily. Just start the ASRock Instant Flash utility and select a BIOS Flash ROM from the device like an USB Stick to flash the BIOS without an additional boot medium and is available after the restart. 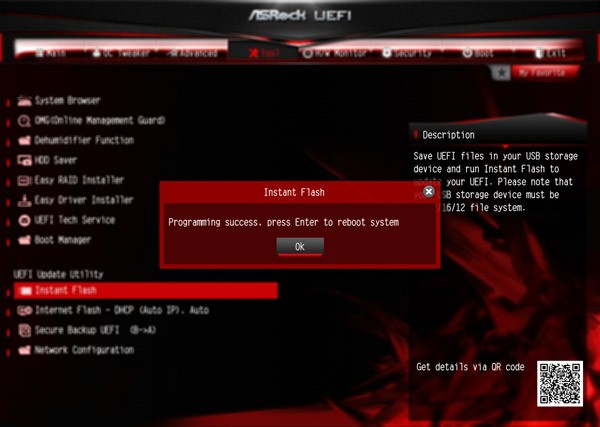 Furthermore, this motherboard is equipped with a backup BIOS. By the “Secure Backup UEFI” option one can update it with a working BIOS from the other BIOS EEPROM and select the preferred BIOS chip at any time over the BIOS selection switch.

If you need technical UEFI help, you can contact the ASRock over the UEFI Setup and LAN connection. 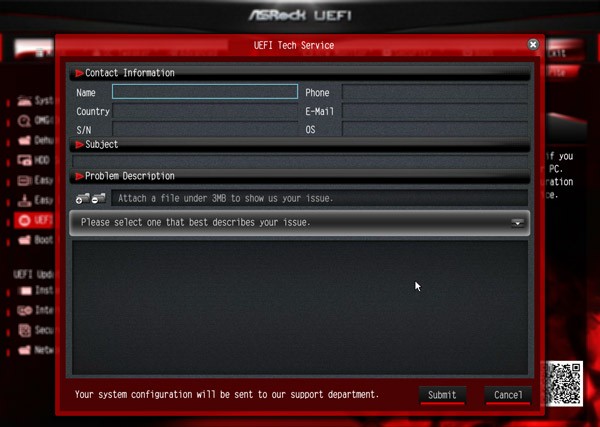 On the tool page, you can find by the way even the system browser view, where you can graphically see all installed components: 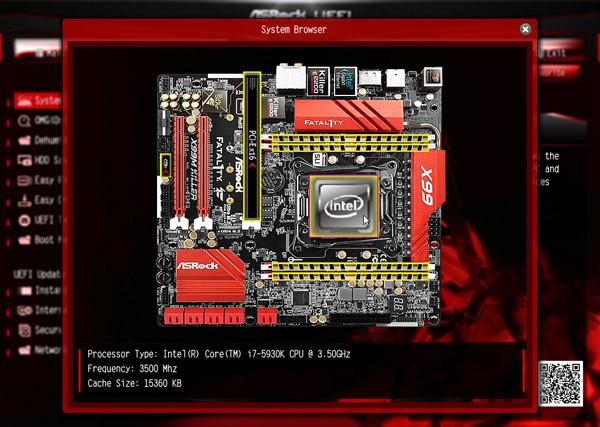 There is also the OMG – no, not Oh My God, but Online Management Guard, which you can specify the times and days for the access of the Internet. This is, for example, handy for parents who want to provide their children an Internet usage time and would like to block the access with a password safely in the UEFI BIOS, or for companies that allow employees to access the Internet only in the lunch break or after work hours. 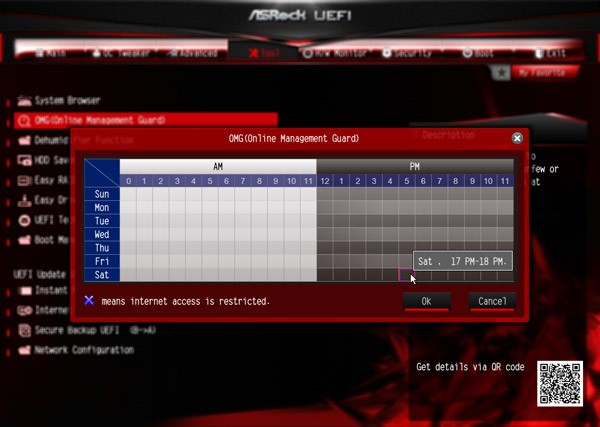 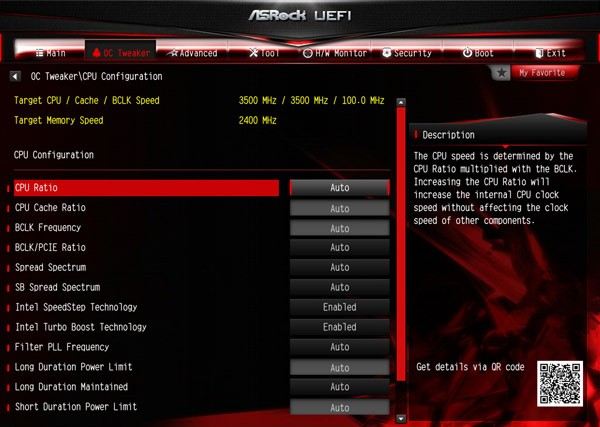 One can set the BCLK/PCIE frequency in this menu from 96 MHz to 300 MHz. This frequency is very important for a lot of frequency values also with Intel LGA2011-3 Haswell-E processors, which can get quickly too high. For this reason, you should carefully increase the BCLK host clock and also adjust the BCLK ratio, to increase it to 125 MHz, 167 MHz or even higher.

In our tests the board at 1.67 BCLK ratio could be stable overclocked to 168 MHz BCLK!

The Intel “K” CPUs have an unlocked multiplier, so one can overclock the CPU frequency very extensively over the CPU multiplier. With a 5930K CPU (default clock 3500 MHz with a CPU ratio of 35x), the ASRock X99M Killer motherboard offered a multiplier range from 12x to 120x.

Here you can see the lower part of the OC Tweaker selection, where the new CPU Tj Max Setting provides the maximum CPU temperature in the range of 85°C up to 120°C: 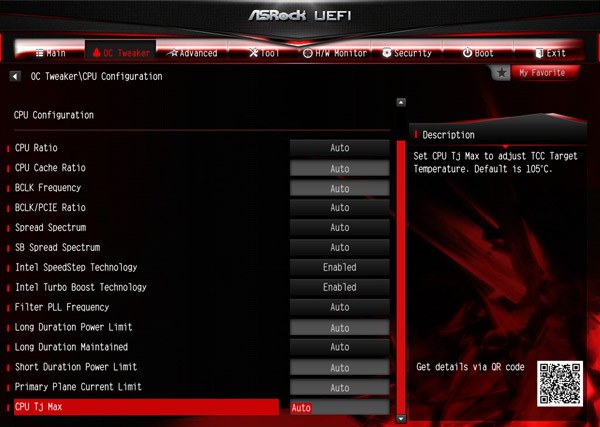 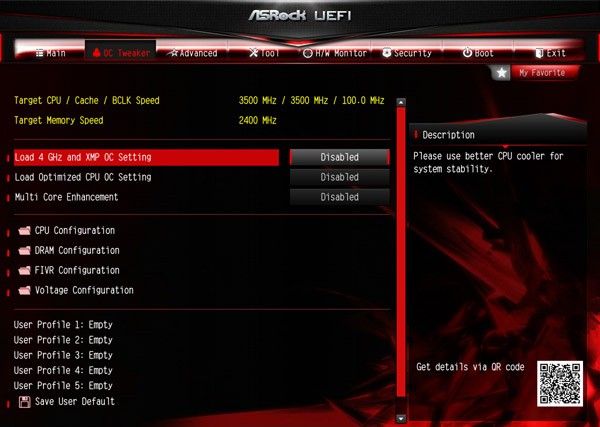 Thanks to the XMP support, XMP memory modules can be set correctly with one mouse click in the UEFI, selecting the desired profile in the DRAM configuration. In the DRAM configuration menu you will find among others the selection, whether to the DDR4 reference clock 100 MHz or 133 MHz and how high you want to adjust the memory voltage. 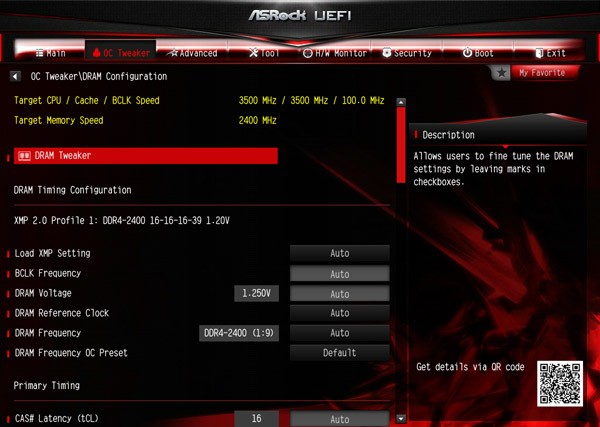 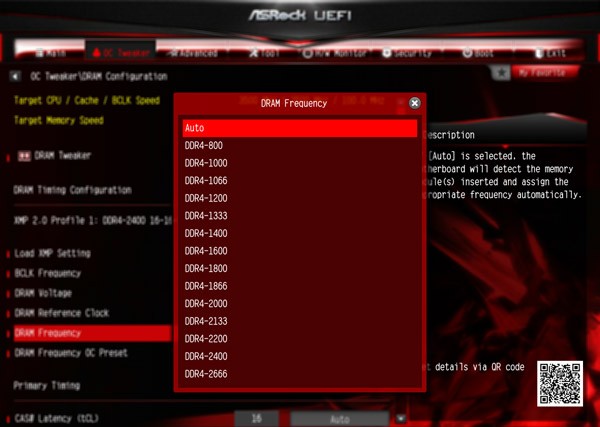 ASRock has still something very special, because higher DRAM settings can be easily selected by the DRAM Frequency OC Preset values. With this DDR4 OC preset it is possible for example to overclock to DDR4-3500 by automatic BCLK increasing: 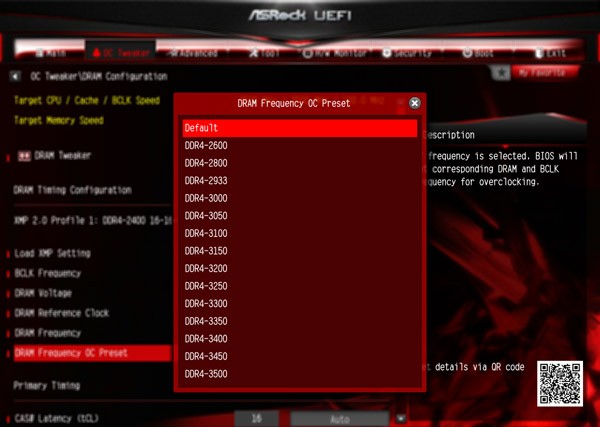 With manual BCLK boost significantly higher memory clock speeds are possible. The frequency of all memory modules is calculated and displayed after changing the reference clock to make it much easier adjusting to the right RAM frequency.

And of course you can adjust all DDR4 timings manually, as well: 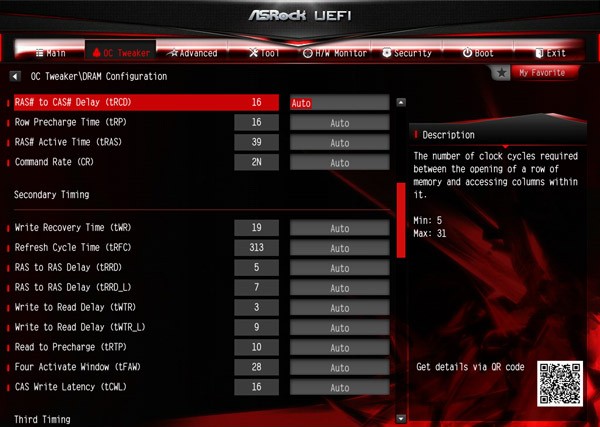 Furthermore the X99M Killer offers e.g. an overview of all SPD and XMP values to choose from directly in the DRAM Tweaker menu. 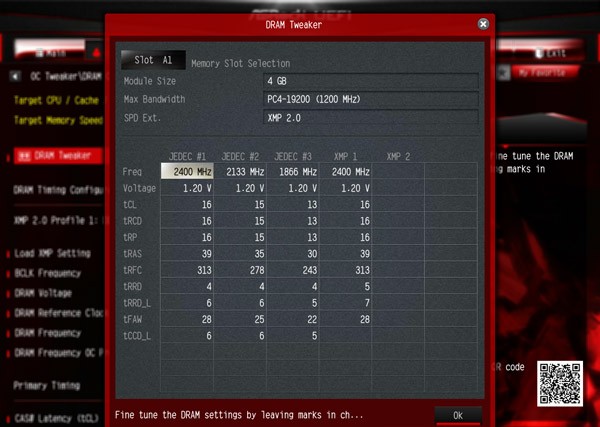 Now we come to the voltage values that can be set very extensively. 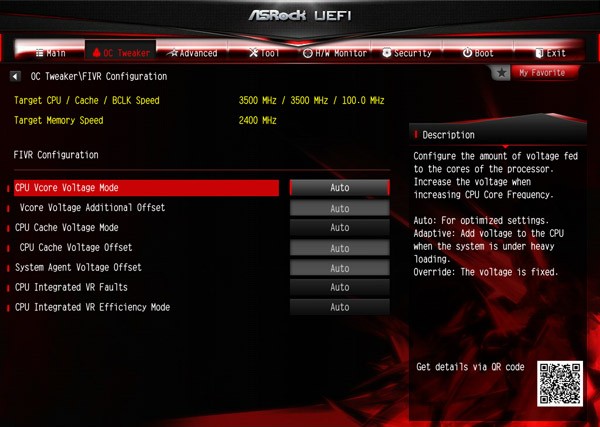 And here you can see the values for the voltage configuration: 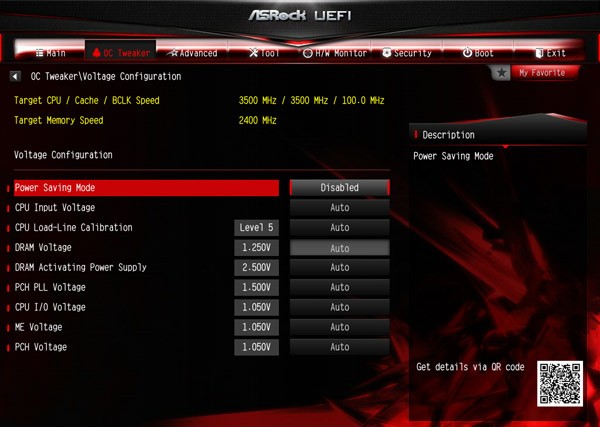 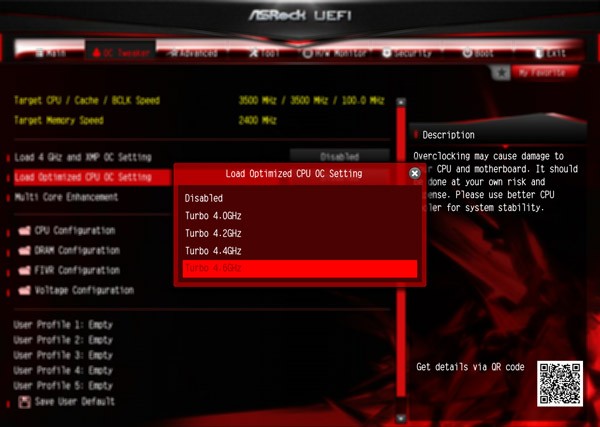 However, for highest overclocking you should set each value manually, to be able to adjust all values in detail for the respective hardware. We give you overclocking help in our PC Forum. 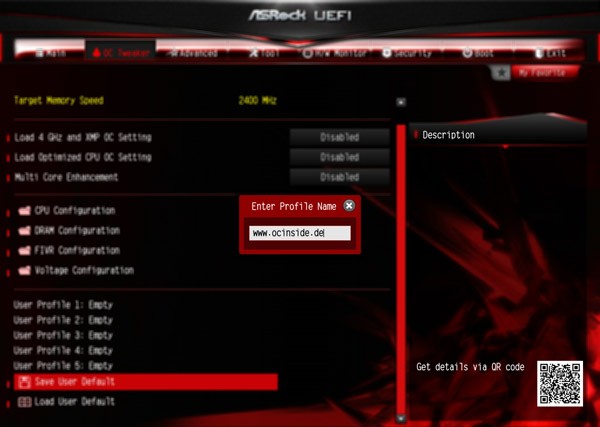 The boot failure guard was also examined in the test and could start the PC even at high overclocking values without CMOS clear with standard frequencies. ASRock leaves the user with the “Boot Failure Guard Count” Option which will boot choice, how often the board should boot with fault settings before it automatically reduces the frequencies. If it accidentally succeeds that the PC fails to boot, you can also set the Clear CMOS button, the stored values in the user profiles fortunately remain to be quickly loaded.

The downclocking or underclocking was also tested in this review. It was possible to lower the Intel Core-i7-5930K CPU multiplier over the BIOS to 12x and the processor can be underclocked in such a way with 100 MHz BCLK to approx. 1200 MHz. Of course, underclocking is like overclocking outside of the manufacturers specification, so it is necessary to have a bit luck. ASRock gives several options for easy PC underclocking / downclocking.

If you want to save energy consumption of the Intel Core i7 PC, should check all settings in the CPU configuration menu under Advanced, too: 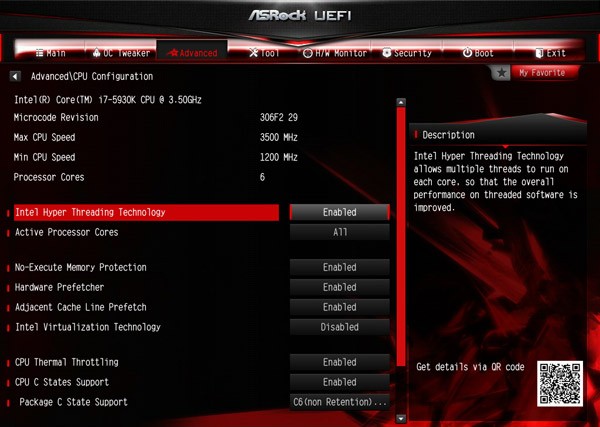 And of course there are much more settings. 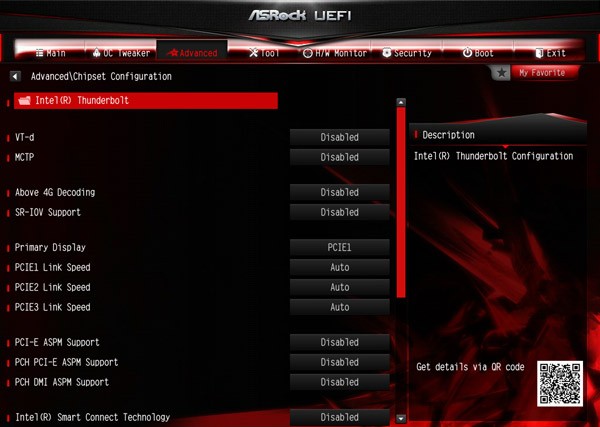 The settings of the fan controller can be found in H/W Monitor directly below the temperature und voltage display. 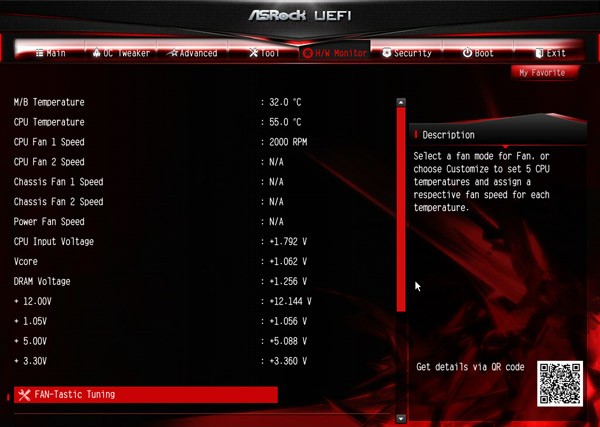 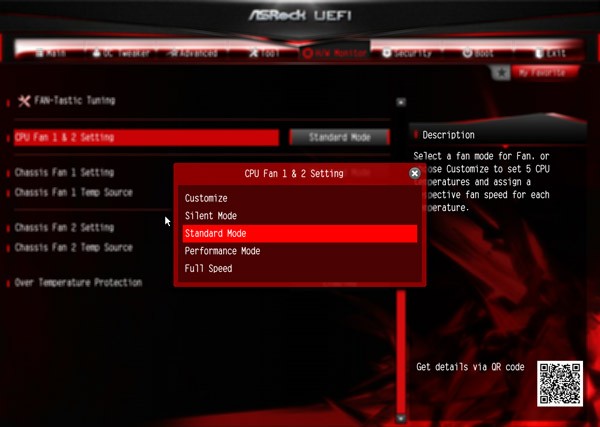 In Customize mode are several temperature steps to assign a certain fan speed. 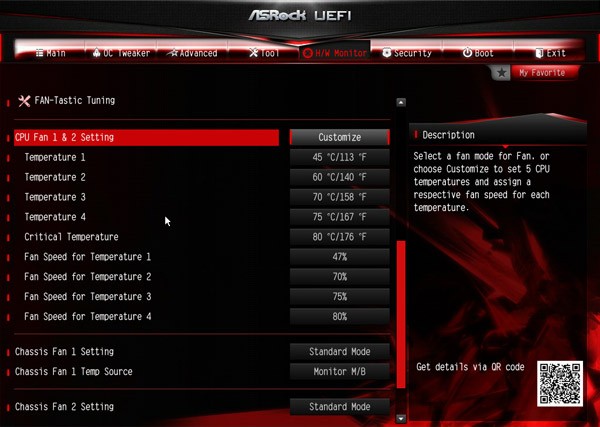 Since the fans are controlled by the CPU or the motherboard temperature, in most cases it is not necessary to buy an expensive additional fan controller. BTW. the fan control can also easily set using ASRock’s F-Stream Tool supplied. First of all you start the fan test to determine all possible speeds and then you can adjust the temperature curve depending upon desired. The ASRock F-Stream software provides some additional tools, such as temperature monitoring, the HDD Saver Option and some OC settings in the OC Tweaker menu.

But not enough, ASRock has integrated now even a graphical interface for controlling the fans in the UEFI Setup. You can find the FAN-Tastic Tuning menu option also in the H/W monitor and can thus make all settings very clearly. Simply select the respective fan connector on the left side and select the mode type on the right side – for example Performance. 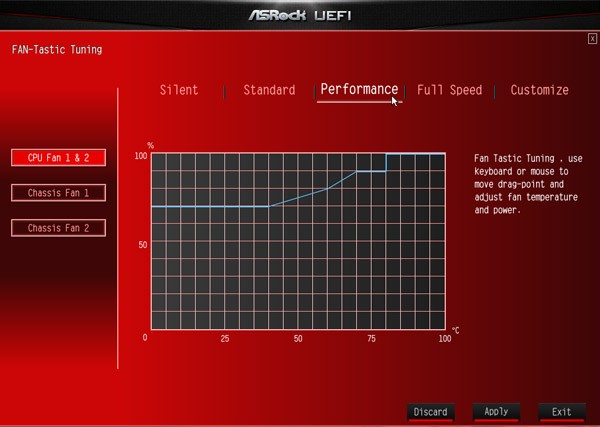 In the Customize mode, you can set all values directly in the chart and save. 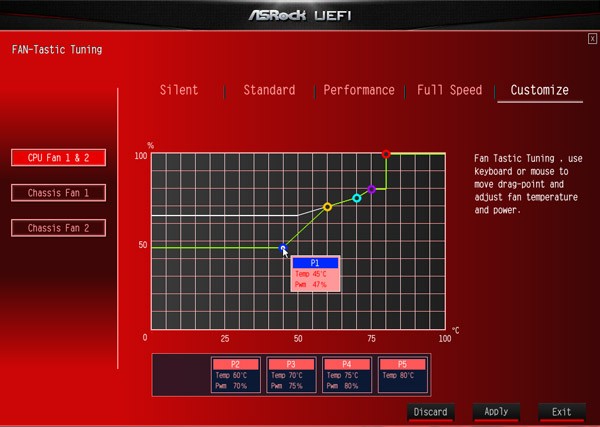 For the chassis fan connectors you can even select, which source you want to use for temperature measurement: Monitor CPU or Monitor Motherboard. 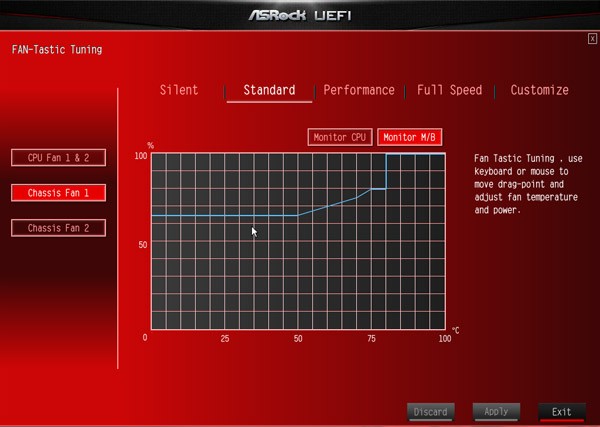 Then just leave the menu and save the values. 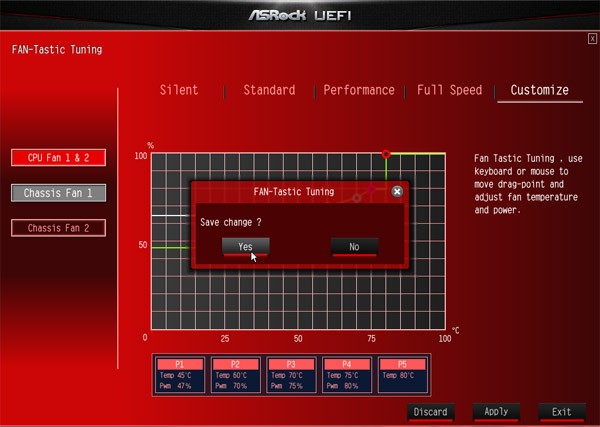