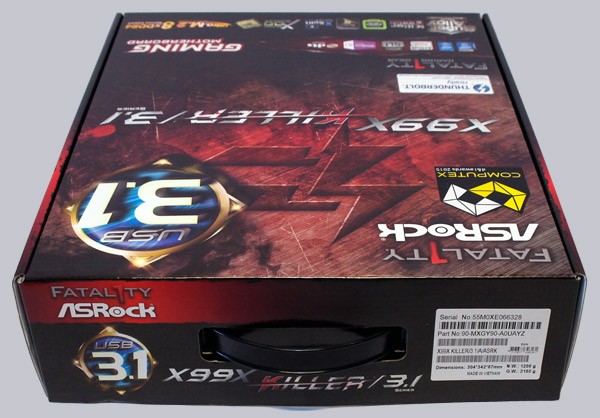 The back of the package shows dozens more features of this ASRock gaming motherboard: 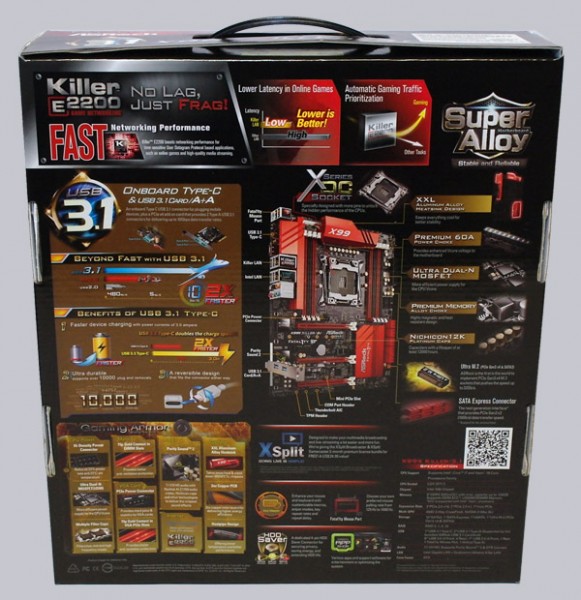 We open the box and get a first look at the content: 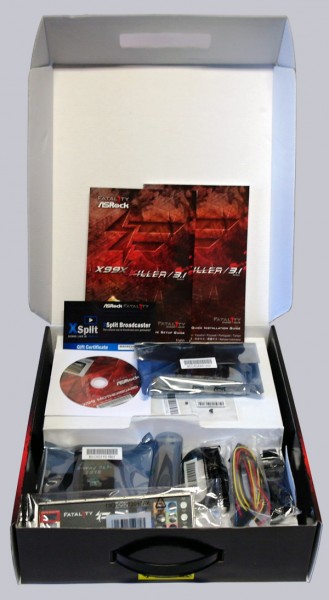 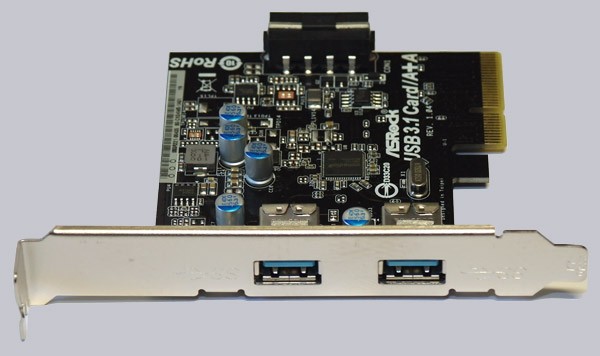 The 3.1 USB card offers beside the much higher transfer rate also the connection of USB devices with more than 0.9 ampere power consumption, for this feature ASRock has spent this card a separate power connector: 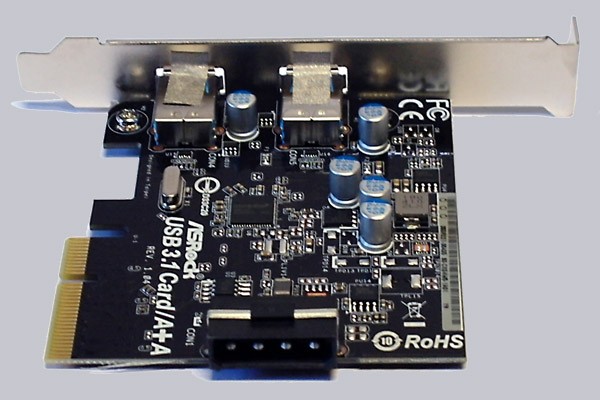 Like other high-quality ASRock motherboards, this motherboard is wrapped with foam for safe delivery: 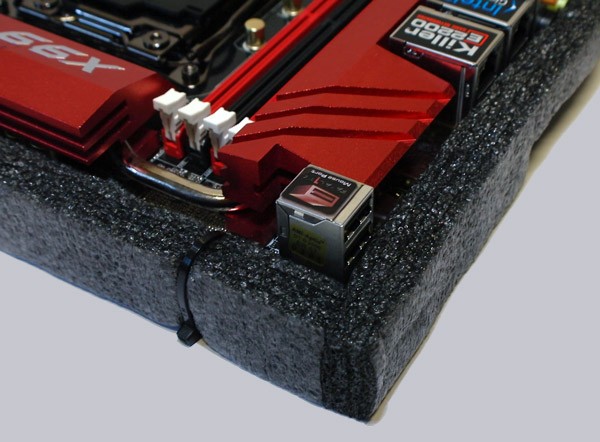 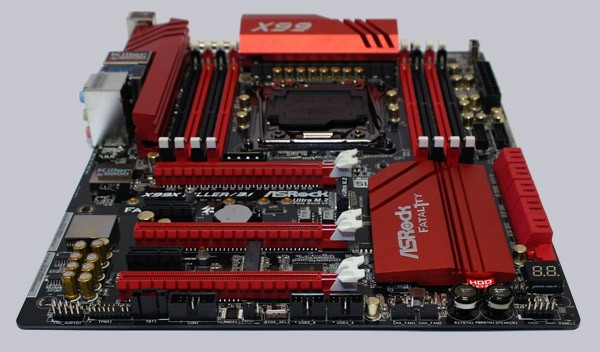 The ASRock X99X Killer 3.1 again offers the two UEFI BIOS ICs with a switch and the useful HDD saver power connector, which let you switch on and off up to two data drives during operation per software. 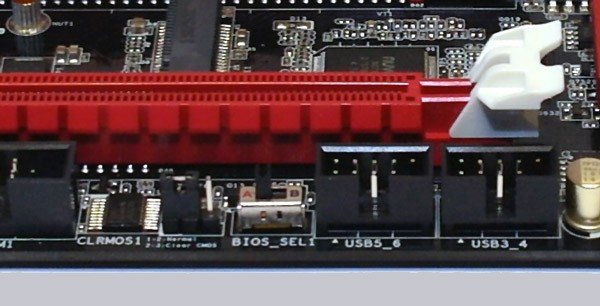 There is also integrated the Dr. Debug 7-segment LED post code display and two buttons for power and reset:

The buttons are of course again LED illuminated and provided with the Fatal1ty logo. 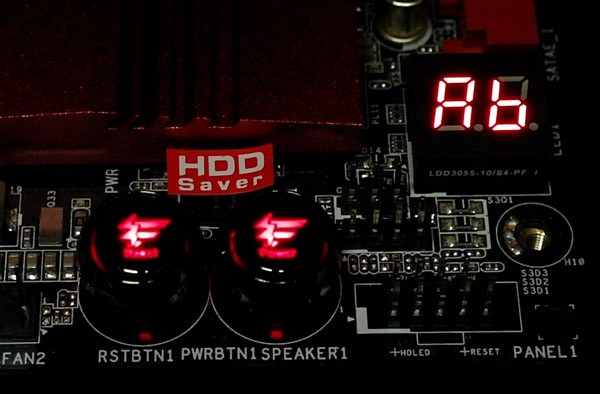 Also the fast ultra M.2 slot for PCIe Gen3 x4 modules with up to 32 GB/s is integrated on the X99X Killer 3.1. On the picture you can see the Ultra M.2 slot and the two UEFI BIOS ICs, but more later on the UEFI review page: 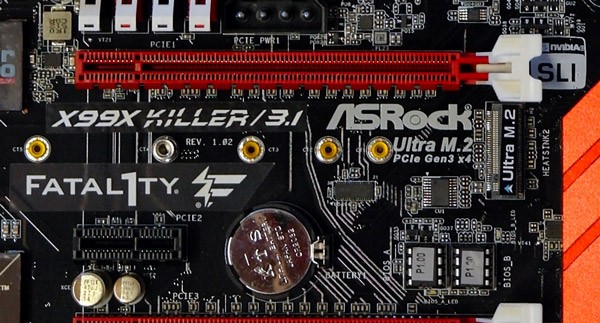 Here you can see the internal USB3.0 connectors, in addition to the high-quality 12K Platinum capacitors, the 24-pin ATX power connector and in the corner is the internal USB port for a fast plug in of a USB memory stick or to connect an internal USB infrared receiver to remote control your PC.

Here is a side view of the motherboard with the large XXL heatsinks in aluminum alloy, which are very carefully assembled on the MOSFETs and connected to the chipset with a heatpipe:

Contrary to the LGA1150 Socket, the Sockel 2011 and this Sockel2011-3 have two levers, to ensure an optimum pressure of the CPU on the socket contacts: 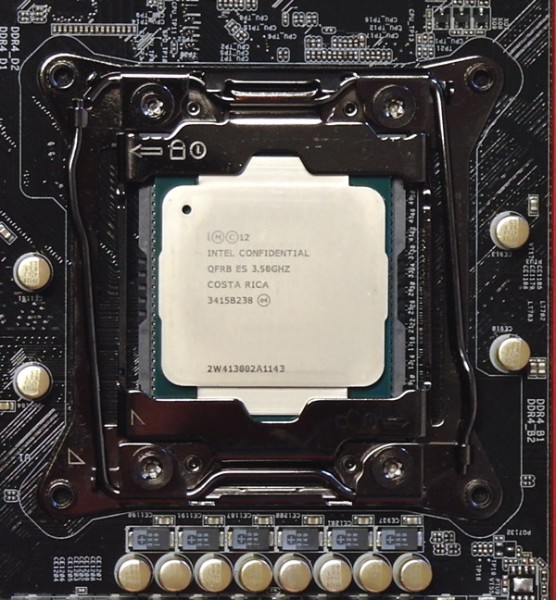 This is how four of the eight possible memory modules on the X99 motherboard to get quad channel mode support. 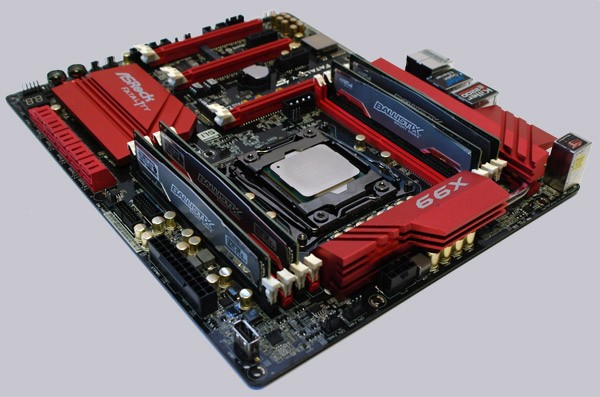 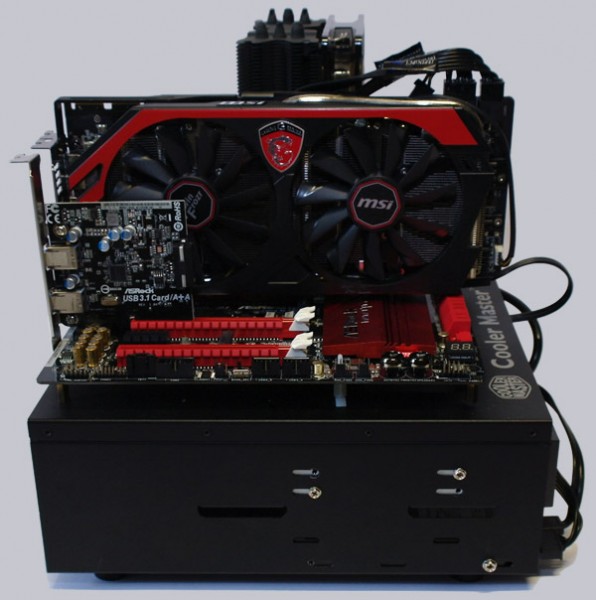 The Board three two PCI Express 3.0 slots for AMD CrossFireX or nVidia SLI, whereby either one graphics card with x16 bandwidth or two graphics cards with x16 lanes bandwidth or two graphics cards with x16 lanes bandwidth and one 8 bandwidth can be connected with x8 can be installed, at least if a CPU with 40 lanes will be used. When a CPU with 28 lanes is installed, the PCIe1 is connected with x16, PCIe3 with x8 and PCIe5 with x4 (PCIe5 is disabled with a M.2 card). The motherboard comes with a CrossFire bridge and a 3-way SLI bridge. More SLI/XFire switch cards are not required to obtain optimum performance for single or CrossFireX or 3-way CrossFireX mode. In addition to the three PCI Express 3.0 slots there are two PCIe 2.0 x1 slots and a Mini PCIe slot.

The ASRock X99X Killer 3.1 can be equipped with up to eight DDR4 modules and is expandable depending upon operating system used (see list) up to maximally 128GB memory.

Here you can see a picture of the eight DDR4 memory slots with quad channel support, install them necessarily first in the four black slots DDR4_A1, B1, C1 and D1: 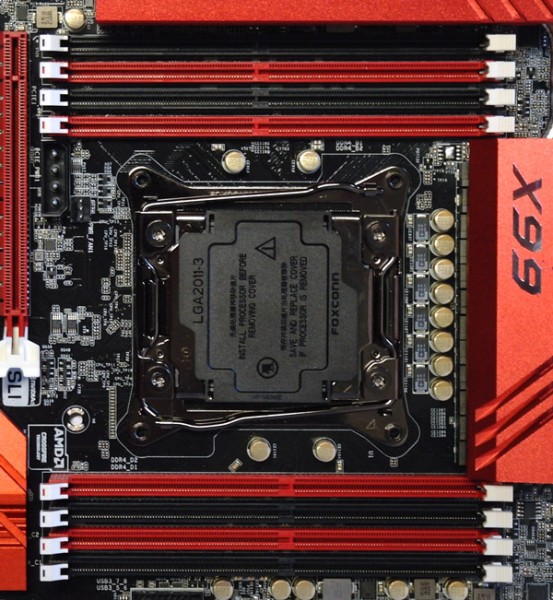 Thanks to XMP support (Intel eXtreme Memory Profiles), XMP memory modules are set correctly with one mouse click in the UEFI and of course there are far more memory adjustments and more OC-options, but more on that later. You can also check the officially supported modules at the ASRock memory support page.

The SATA 3 ports SATA3_0 to SATA3_5 are supporting RAID 0, RAID 1, RAID 5, RAID 10, Intel Rapid Storage Technology 13 and Intel Smart Response Technology, NCQ, AHCI and the Hot Plug function in AHCI mode (AHCI stands for Advanced Host Controller Interface and can be selected in the UEFI). Thanks to the UEFI BIOS also drives with more than 2 TB for the installation of Windows 8, Windows 7 x64 or Vista x64 can be installed.

Another feature is the HDD saver function, which we already know from the X99 Extreme6 and Z97 Extreme6 motherboard and no longer like to miss. At the HDD saver connector can be operate up to two hard drives in AHCI mode, which can be power on or off over the UEFI or in Windows. This not only saves electricity, but also allows e.g. the independent operation of a backup HDD, which can be also protected with a password. The HDD saver function can be called after F-Stream installation over the supplied ASRock F-Stream tool or by using the key combination CTRL + Alt + S.

ASRock emphasizes the new 3.1 ports at this motherboard, which are available both, over the above shown PCIe x4 USB 3.1 card with two USB 3.1 Type-A 10 Gb/s ports and over the integrated USB 3.1 Type-C port on the mainboard. The USB 3.1 TypeC plugs can be inserted now finally also in both ways.

The ASRock X99X Killer 3.1 motherboard is equipped with the ALC1150 audio codec with content protection, 115dB SNR DAC, TI NE5532 Premium Headset Amplifier and Purity Sound 2, which supports 7.1 surround sound for example analog over 5x 3.5mm connectors on the ATX panel or over an internal frontpanel audio connector. Additionally, there is an optical SPDIF digital output and premium Blu-Ray audio support. So most users do not need to buy an additional sound card with digital outputs.