As already explained in the unboxing video on our OCinside YouTube Channel you can use not only the latest Intel Kaby Lake processors, but also the previous Intel Sky Lake processors on this Z270 board. 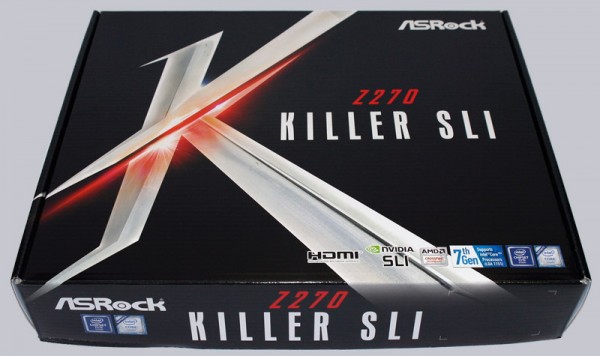 The back of the package already shows some features like Dual Ultra M.2, Aura RGB LED and much more. 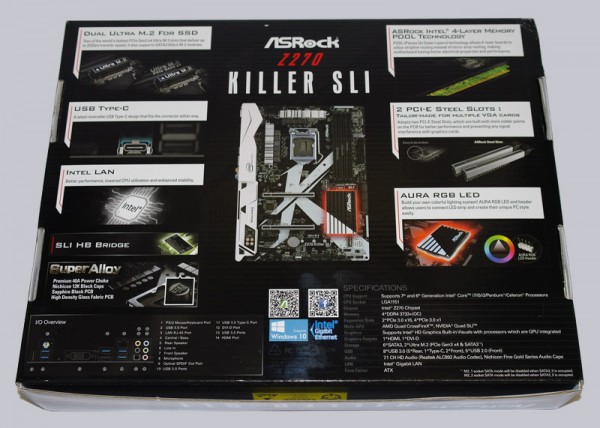 Let us open the box and get a first look at the content. 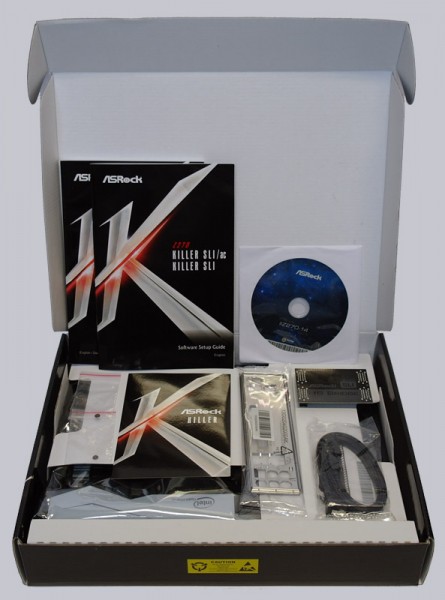 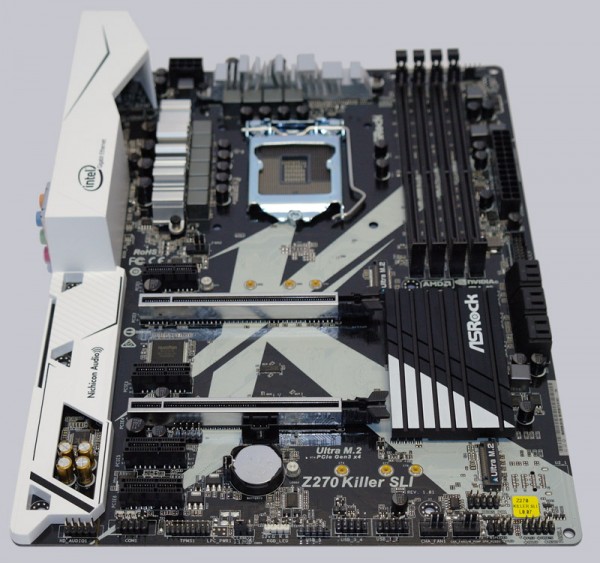 On this picture you can see one Ultra M.2 slot, that we have tested with a Crucial MX300 M.2 SSD.

Here you can see one of the two new PCIe steel slots.

This white 4-pin 12V RGB header is also new. Here, you can connect conventional RGB stripes in order to lighting, for example, the chasssis.

ASRock has also RGB LEDs under the chipset cooler integrated, which can be controlled as desired. The following image shows a few freely-selected colors:

The RGB LED header and the integrated RGB LEDs are controlled by the supplied ASRock AURA RGB LED software or over the BIOS – in the course of this review, we’ll explain you all UEFI settings. 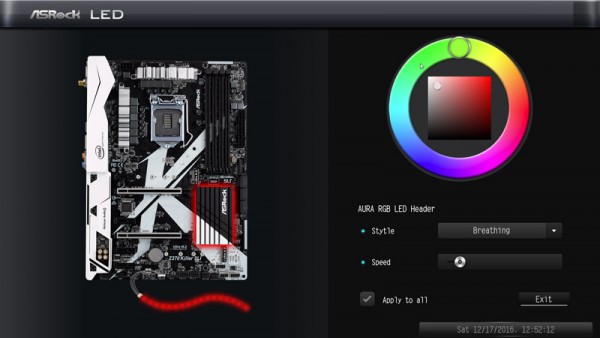 Here you can see the 24-pin ATX power connector beneath to the internal USB3.0 connector and some of the high-quality capacitors.

Here you can see a motherboard side view with the protective I/O panel cover (pictured right) and the relatively small heat sink made of aluminium alloy, which is carefully installed on the MOSFETs and chipset. 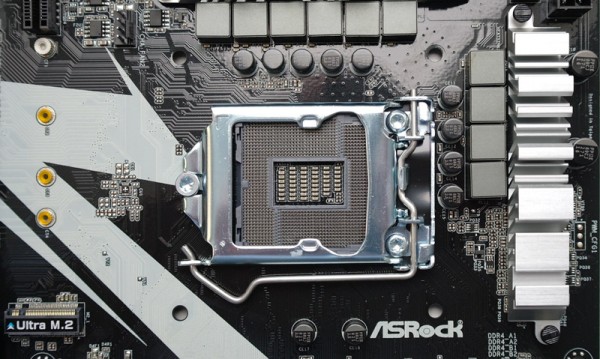 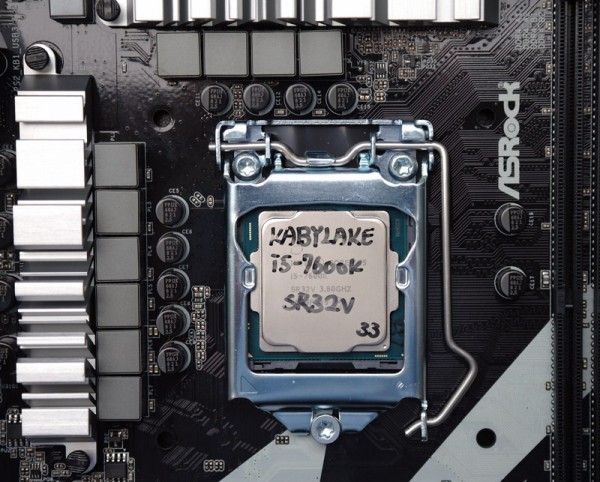 This is how two of four possible memory modules have to be installed on this Z270 motherboard to get dual channel mode support. 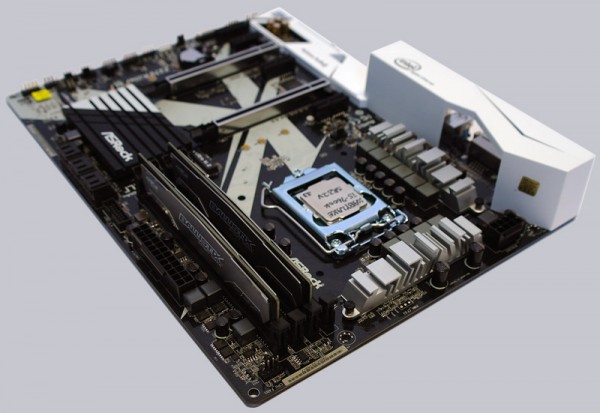 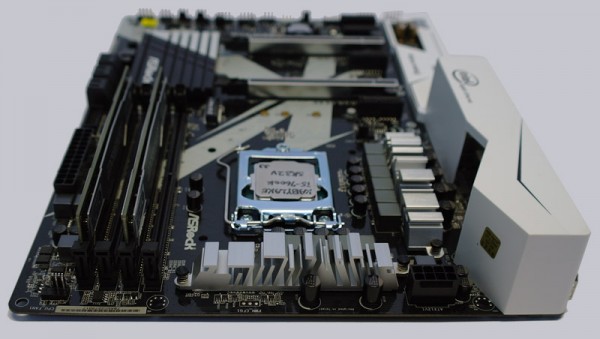 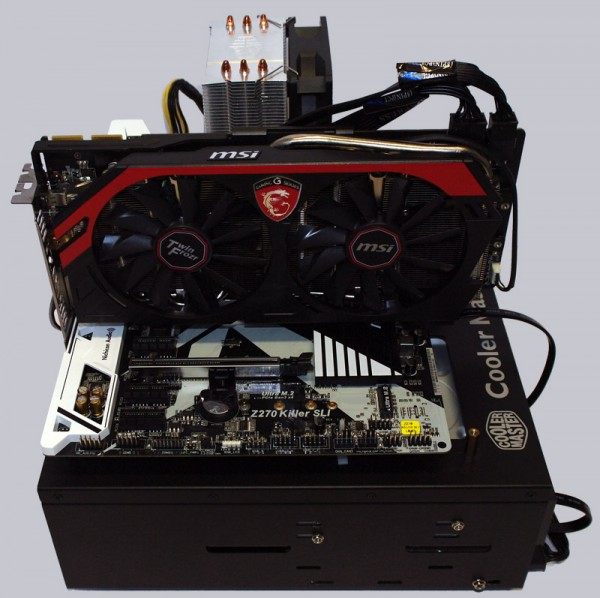 Here you can see the four cores of the Intel Core-i5 7600K Kaby Lake CPU in Windows 10 Task Manager.

The Board two PCI Express 3.0 slots for AMD CrossFireX or nVidia SLI, whereby either one graphics card with x16 bandwidth or two graphics cards with x8 lanes bandwidth can be installed. The motherboard comes with a SLI HB Bridge. More SLI/XFire switch cards are not required to obtain optimum performance for single or CrossFireX. In addition to both PCI Express 3.0 slots, there are four PCIe 3.0 x1 slots.

The ASRock Z270 Killer SLI can be equipped with up to four DDR4 modules and is expandable depending upon operating system used (see list) up to maximally 128GB memory.

Here you can see a picture of the four DDR4 memory slots with dual channel support, you should install them first in the slots DDR4_A2 and B2 or A1 and B1:

Here you can see the SATA3 ports, whereby depending on the M.2 modules used, the SATA_0 and/or SATA_5 are disabled:

The SATA 3 ports are supporting RAID 0, RAID 1, RAID 5, RAID 10, Intel Rapid Storage Technology 15, Intel Smart Response Technology, NCQ, AHCI and the Hot Plug function in AHCI mode (AHCI stands for Advanced Host Controller Interface and can/should be selected in the UEFI). Thanks to the UEFI BIOS also drives with more than 2 TB for the installation of Windows 10, Windows 8 or Windows 7 x64 can be installed. Installing the drivers was absolutely no problem with Windows 10 and the Windows 10 installation was done very quickly. At the review date, there was no Windows 7 HD 630 video card driver available, so we used Windows 10 for the Integrated GPU tests.

The ASRock Z270 Killer SLI has one USB 3.0 Type-C port at the ATX panel (bottom, can be inserted in both directions).

The ASRock Z270 Killer SLI motherboard is equipped with the ALC892 audio codec with content protection, which supports 7.1 surround sound for example analog over 5x 3.5mm connectors on the ATX panel or over an internal frontpanel audio connector. Additionally, there is an optical SPDIF digital output and premium Blu-Ray audio support. So most users do not need to buy an additional sound card with digital outputs.