++++ The GA-K8NS pro socket 754 board has at present a price of approx. 80 euro (05/2005) and is appropriate thereby in the middle range of all socket 754 motherboards. But if we take look at the equipment, the features and the provided accessories, this isn’t a middle class motherboard at all. I can only be astonished, which did lately with the motherboards, because the equipment characteristics were really enormously extended and Gigabyte shows with the GA-K8NS pro that the price doesn’t have to be higher. But let us begin with the accessories. this socket 754 based mobo is shipped with 2 S-ATA cables, 2 S-ATA power cables, 3 UDMA cables, an ATX screen, a SPDIF bracket, a combined Firewire and USB bracket and beside the Tools CD also some manuals, which could be hardly exemplary. Furthermore it’s worth to see the other Addons, because beside perfectly coloured marked sockets and connections (see picture), a new developed AGP fixing clip, which solves to laterally is pulled (in the picture on the right of above), an active chipset radiator and a Backup BIOS chip (in the picture right down) the board still has some more to offer. 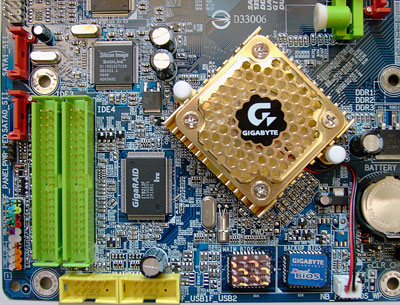 The equipment is really praise-worth, since Gigabyte spend the GA-K8NS pro a Serial ATA RAID Controller and an UDMA 133 RAID Controller for conventional IDE hard disk drives. The variety in RAID combinations and the possible capacity with the handling of up to 12 HDDs know nearly no bounds! Besides Gigabyte gave the board also a 8-channel ALC850 sound chip and two IEEE1394 Firewire connections beside the 8 USB connections.

As we see, the equipment is really fantastic and we are not arrived at the end with the additional features … In the BIOS are various voltage and frequency settings, the possibility of fan control with extensive temperature monitoring up to the change of the BIOS language. BTW. all BIOS points are deposited with extensive assistance. Solely the manual selection of the memory frequency wasn’t discoverable and a strange phenomenon during the manual input of the host frequency was to be criticized. With the used BIOS version in the test the board was operated during manual input of e.g. 220 MHz erroneously with 420 MHz, which is naturally not healthy and of course not running. But I am confident that Gigabyte will repair this bug certainly soon with a new BIOS version and in the meantime we better should change the frequency over dropdown fields in the BIOS or with the provided Windows software. Apropos host frequency, the BIOS permits a maximally possible frequency of 455 MHz! Of course it’s not possible to reach this maximum frequency, but it’s really hard to overcome a temptation of overlocking with the well cooled chip set 🙂

Conclusion: You’ll get tears of joy with the Gigabyte GA-K8NS pro socket 754 motherboard when you see the features, accessories and even the affectionate work of the manual and BIOS. And despite the so far best equipment the motherboard have at present a favourable price of approx. 80 euro (05/2005) – respect ! With as much praise for this Gigabyte GA-K8NS pro motherboard with such a favourable price does not lead a way at an honor with the OverClocking price tip 03/2005 Award of ocinside.de which earned Gigabyte hereby fairly.

Special thanks to Gigabyte
for their support. 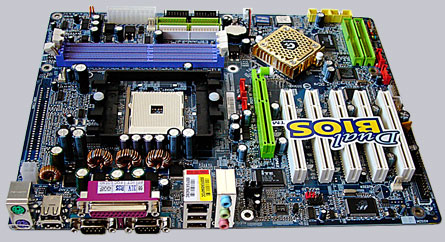 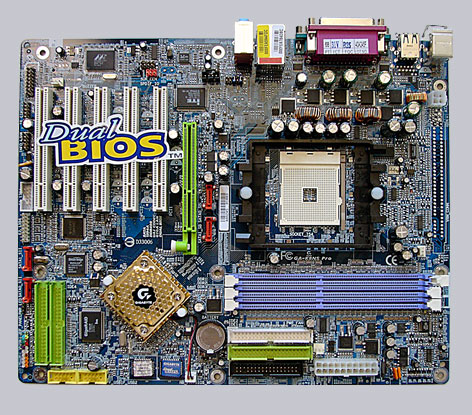 **** All Socket 754 mainboard tests since 01.08.2004 are based on an AMD Athlon 64 3200+ with a HIS Excalibur Radeon 9600 Pro graphic card, Kingmax 256 MB PC2700 memory module and the following software configuration: Windows 98 SE, DirectX 9b, Catalyst 3.6 graphic driver and 3DMark 2003. Since all benchmark results should only offer a comparison among themselves, I select Win 98 SE for a faster OS installation which is of course not the usual OS for Athlon 64 systems but enough for a comparison.

Back to the Mainboard comparison !