The memory ICs are provided on a green 8-layer PCB with two passive heatsink halves (heat spreader), which are supposed to enhance the memory cooling also with higher frequencies and/or higher voltages. With heat spreader one achieves on the one hand better overclocking results and on the other hand a longer life-time, whereby G.Skill by the way grants lifelong warranty (Warranty Lifetime) for the buyer (all informations to manufacturer conditions are of course without guarantee by ocinside.de). Additionally the F2-8800CL5D-4GBPI kit has EPP (Enhanced Performance Profile) to detect the highest possible timings and frequencies for easy overclocking on current motherboards with EPP support.

Here is the PCB with the memory chips and the EEPROM for the SPD and EPP data:

The two HS halves are by the way only affixed with a double-sided tape on the modules and can be easy removed by pushing the HS halves apart slightly for a few seconds to open them. Afterwards they can be laterally pushed from each other.

The label U82018C095Y7 can be seen clearly on the memory ICs, however no further information or technical data was available by the manufacturer about these chips. 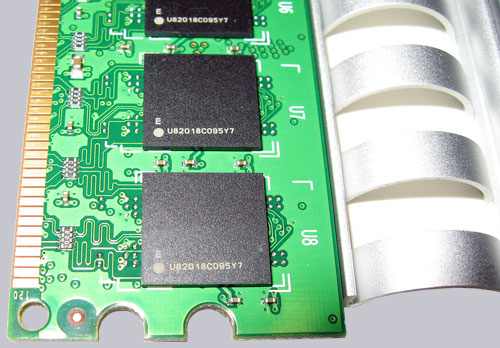 Not 4GB on booting, but only 3GB in the BIOS or Windows …

The 4GB size is unfortunately still a matter of its own, therefore here is again a short explanation about 4 gigabyte memory in Windows from the previous review.

In the meanwhile the RAM size is fortunately much higher, because with 32-bit operating systems like e.g. Microsoft Windows 2000, Windows XP and Windows Vista the first things are starting approximately with more than 2GB. 2GB can be used both, for the operating system, and for some programs. But starting from 3GB or starting from values between 3 GB and 3.5GB the memory management on 32-bit operating systems is unfortunately rather badly. Even the activation of Memory Hole and/or Memory Remapping in the BIOS and entries of /PAE (Physical Address Extension) or /3GB in the Boot.ini doesn’t help WinXP to the full 4GB in a fast AMD PC.

The only thing which helps, is an update to a new 64-bit operating system like e.g. Windows Vista 64-bit, Windows Server editions, or 64-bit Vista edition, which supports different memory sizes. Windows Vista 64bit Home Basic supports for example a capacity up to 8GB, Home Premium 16GB and Vista Ultimate, Vista Business, as well as Vista Enterprise supports a size of more than 128GB.

So don’t worry, if your PC just boots with 3183MB, 3184MB, 3.1GB, 3.2GB or similar RAM values into Windows XP. Your memory is not defective, but it is because of the memory support (motherboard or operating system). The exact memory capacity depends on different factors such as hardware used below 4GB and may vary depending upon PC.