Result and general impression
++++ The ASRock 890FX Deluxe4/A/ASR motherboard has a price of approx. 135 Euro (11/2010) and is thus already in the upper price segment of the Socket AM3 motherboards.

ASRock 890FX Deluxe4 is really a Deluxe Socket AM3 motherboard based on the AMD 890FX chipset with SB850 southbridge.
Five PCI Express slots, four USB3.0 ports, whereby two of them are connected with the enclosed USB3.0 front panel, six SATA3 connectors provided by SB850, two additional SATA3 ports provided by a Marvel SE9120 chip, one eSATA3 connector, one conventional IDE port, Gigabit LAN, optical and coaxial SPDIF sound output in addition to the six analog sound connectors of the ALC892 soundchip and a few more features makes this a Deluxe motherboard.
Let us take a look at the details of this ASRock 890FX Deluxe4. 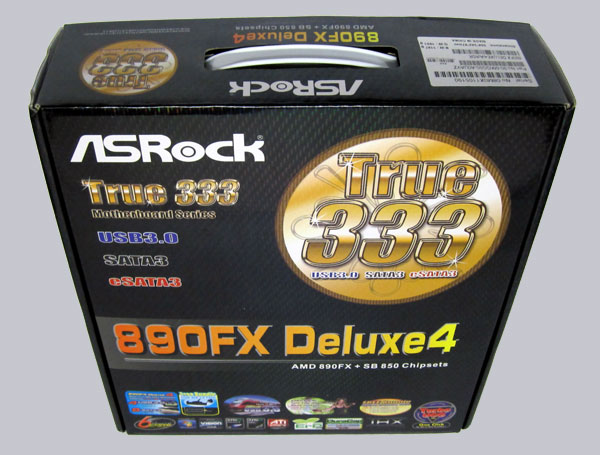 A first look to the layout and the finish of the ASRock 890FX Deluxe4 board with high-quality solid caps capacitors, 7-segment post code display, LED lighted Power- and Reset button makes a high-quality impression: 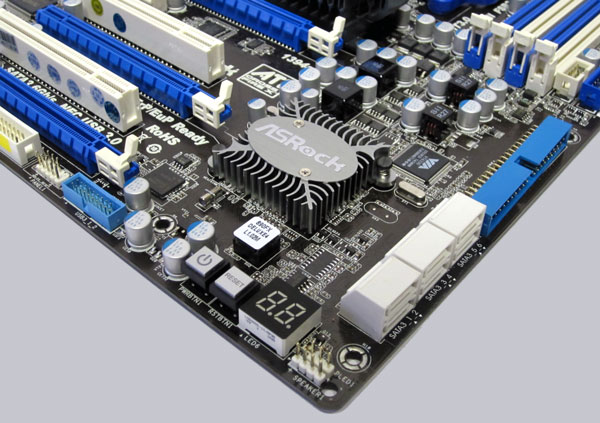 Here is a picture of the included equipment: 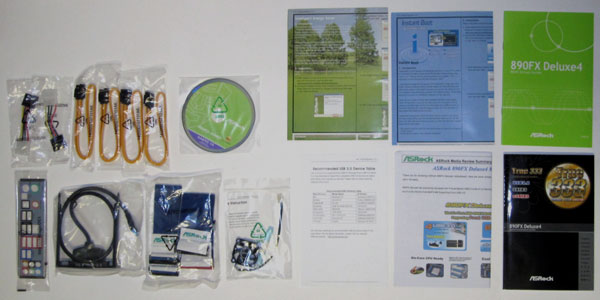 This included ASRock front USB3.0 panel can be connected with the special proprietary 20-pole plug to the motherboard: 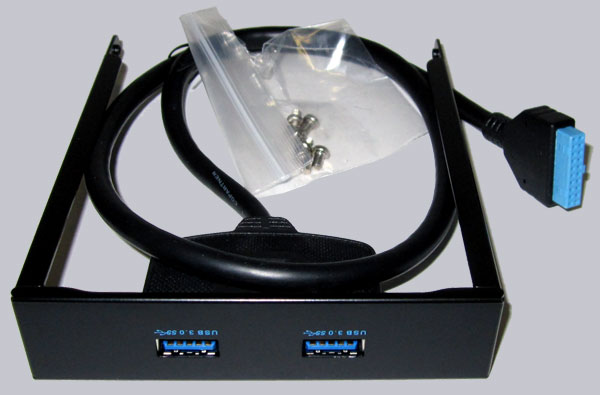 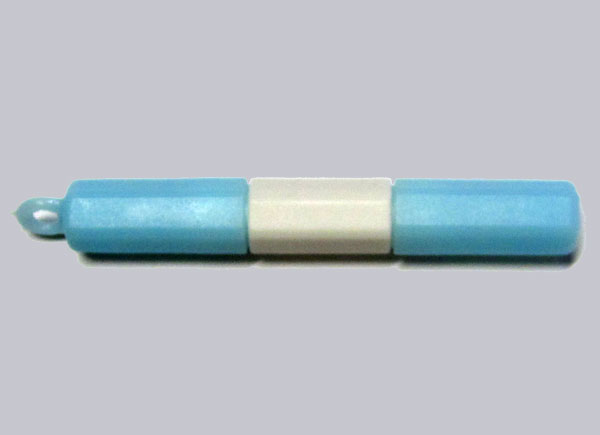 Right, this is a friendly, small cross-head and slotted screwdriver, to install the contained chipset fan, if one like to overclock the chipset very high: 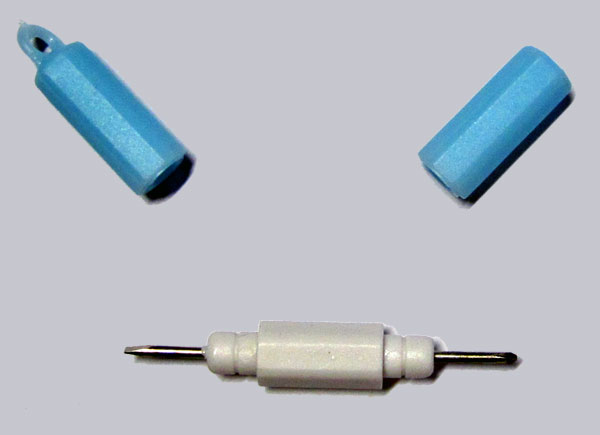 This 3-Way CrossFireX motherboard offers three PCI Express 2.0 video card slots, whereby either one Radeon video card can operate with x16 band-width, or two can operate in x16 mode, or two in x16 mode and one in x4 mode.
A SLI/XFire switch card is not necessary to get the optimal performance for single, CrossFireX or 3-Way CrossFireX operation.
If one like only use one video card on the 890FX Deluxe4, one should insert the PCI Express video card into the blue PCIe2 slot, in order to get the fastest x16 bandwidth.
By the way one could use theoretically also several nVidia video cards, however officially not as SLI, but only the output to several monitors would be supported.
Additionally to the three PCI Express 2.0 slots there are two PCI slots and two x1 PCIe 2.0 slots.

The ASRock 890FX Deluxe4 can be equipped with up to four DDR3 modules and is expandable depending upon operating system used (see list) to maximally 16 GB memory.

The 890FX Deluxe4 offers, contrary to the previous tested 890GX motherboards, one floppy connector and one IDE connectors for up to two conventional ATA-133 drives.

The board has two USB 3.0 connectors on the ATX-panel and another 20-pin connector for the enclosed front USB3.0 panel with two additional USB3.0 connectors.
Furthermore, it offers six USB 2.0 connectors on the ATX panel and four internal USB 2.0 plugs for up to eight optional USB ports.
So ASrock utilize the latest USB3.0 technology with up to 5 Gb/s and all USB 2.0 ports of the chipset.
Additionally, the board has one IEEE1394 Firewire port on the I/O panel and another optional internal IEEE1394 port.

ASRock integrated two NEC D720200F1 controller ICs on this 890FX Deluxe4 to provide the front USB 3.0 ports in addition to both USB 3.0 ports on the I/O panel: 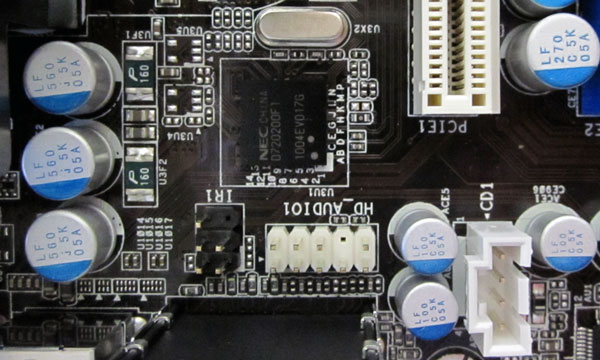 This motherboard does not provide a parallel port.
The serial port is only optionally available as internal onboard connector.

The ASRock 890FX Deluxe4 motherboard is equipped with the ALC892 audio codec with content protection, which supports 7.1 surround sound for example analog over 6x 3.5mm connectors on the ATX panel or over an internal audio connector.

For the digital output there is an internal HDMI SPDIF out connector available, to connect it for example with a SPDIF cable to a HDMI suited video card, in order to get the digital audio and video signal to a HDMI equipment like a HD-Ready LCD TV.
Additionally there is also an coaxial digital SPDIF output, an optical digital SPDIF output, premium Blu-Ray audio support and THX TruStudio Pro support.
So most users don’t need to buy an additional sound card with digital outputs.

Let us continue with BIOS options and BIOS overclocking.
By pressing F2 or Del, you get access to the AMI BIOS with all important hardware settings.

The latest at test date available P1.10 BIOS version offers many DDR3 memory settings like e.g. the memory frequency setting from 400 MHz over 533 MHz and 667 MHz on up to 800 MHz (DDR3 800/1066/1333/1600).
The frequency of all memory modules is calculated and shown immediately after changing the reference clock and makes it much easier to adjust the right RAM frequency.

The boot failure guard was checked in this review as well and it was possible to start the PC on standard values with too high overclocking settings without using the Clear CMOS Jumper.
It was just necessary to press the Reset button.
ASRock integrated an “Boot Failure Guard Count” option, where the user can decide, how often the board should try to start with too high settings, before it reduces the settings for a correct boot.

Another interesting feature is the so-called UCC BIOS setting.
With the Unlock CPU Core feature it was possible to unlock deactivated CPU Cores.
Unfortunately it’s not possible with every AMD Athlon II or Phenom II CPU, but the BIOS options are nevertheless present and this is surely for some buyers an important purchase aspect.
The UCC option was called Advanced Clock Calibration or short ACC on previous motherboards and can be unlocked on the ASRock board with this additional UCC IC.
The L3 Cache allocation can be changed with the BSP and All Cores option.
Also the CPU Active Core Control option can be useful to activate or deactive some Cores of the CPU and additionally it is possible to optimize each CPU Core in the BIOS.

Who don’t know all of these settings or who don’t like to know more about overclocking, can try to overclock the PC over the turbo 30 menu.
In the turbo 30 menu one can increase the system performance automatically to 30% if the components support it with the necessary luck.
Just select the System Performance Increases 30% setting in EZ Overclocking Turbo30 menu and some components of the system will be overclocked by 30 percent.
The 2600 MHz CPU is now overclocked to approx. 3120 MHz.

With the CPU Thermal Throttle option, it is possible to lower the CPU frequency on too high internal CPU temperature in the range of 12.5% to 87.5%, to protect the CPU from overheating.

Underclocking and OverClocking is outside of the manufacturers specification, so it’s necessary to have a bit luck and ASRock gives several options to overclock or underclock the system more easily.

The BIOS of the passive or optional active cooled 890FX Deluxe4 motherboard offers a CPU Quiet Fan option (temperature fan control) for a 4-pin CPU fan, a 3-pin CPU fan and a 4-pin chassis fan.
Also the other chassis fans can be adjusted manually, so it is not necessarily to buy an additional fan controller.

Several energy saving options are available on this ASRock motherboard.
The ASRock 890FX Deluxe4 board offers for example the Away Mode, which is particularly very important when using Microsoft Windows MCE (Media Center Edition) to e.g. record TV shows when the PC system is nearly powered off.
Who like to boot much faster, should try the ASRock Instant Boot function.
Furthermore IES (Intelligent Energy Saver) reduces the power consumption by lowering voltages on less load.
In our test it was also possible to overclock with activated CnQ feature.
The temperature monitoring and overclocking features can be e.g. adjusted with the included OC Tuner Software.

The basic equipment of this Deluxe motherbaord is really “Deluxe”, because the 890FX Deluxe4 offers six SATA3 ports with RAID support over the SB850, two additional SATA3 ports over the Marvel SE9120, one eSATA3 connector, two USB 3.0 ports on the I/O panel, two USB 3.0 front panel ports, up to ten possible USB 2.0 ports, two possible IEEE1394 ports, Gigabit LAN, 7.1 sound, analog sound output over six connectors, digital sound output over an optical SPDIF connector and a coax SPDIF connector.
Contrary to the 890GX boards, this board does not provide an onBoard graphics solution, but it offers a floppy disk connector as well as a conventional IDE connector for up to two ATA133 drives.

All in all this ASRock 890FX Deluxe4 is a high-quality ATX board for user and enthusiasts, who like to build a high-end AMD PC with a comprehensive equipment.

Here you can buy the ASRock 890FX Deluxe4 motherboard.

Special thanks to ASRock for their support.Picture 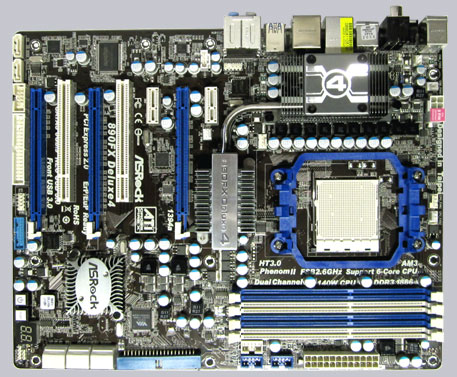