++ The ASRock E3V5 WS Motherboard is available for approx. 120 Euro (02/2016) and is therefore in the middle price segment of the Intel LGA1151 motherboards.

However, the basic equipment of the ASRock E3V5 WS motherboard is not quite as extensive equipped as the end-consumer motherboards in the same price range, but has at least a total of five PCI Express slots, four DDR4 slots depending on the CPU with ECC support, six SATA3 ports, up to six possible USB 3.0 ports, up to six possible USB 2.0 ports, Server Grade Gigabit LAN, Sound, TPM header, the new interface for the graphical control of the fans in UEFI setup, the Easy Mode UEFI setup and much more …

You have to give up some points regarding the Intel C232 mainboard that certainly would anyway be uninteresting with motherboards in server segment. For example, overclocking is not possible. Furthermore, there is unfortunately no SATA Express port, Ultra M.2 slot and HDMI output port. Also optical S/PDIF and USB 3.1 ports are missing at this workstation motherboard.

Instead, the E3V5 WS supports the new Xeon E3 v5 CPUs with 8MB cache and ECC memory, to allow optimal base for a server or workstation platform.

Here you can buy the ASRock E3V5 WS motherboard. 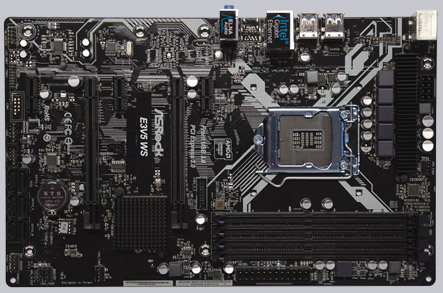