The ASRock H170 combo LGA1151 DDR3/DDR4 motherboard allows the user still using its DDR3 modules, it has a good basic equipment, an innovative UEFI BIOS, but unfortunately caused by the H170 chipset no settings for the Intel LGA1151 CPU overclocking.

Usually the support of DDR3 and DDR4 as Combo motherboard with such a good basic equipment for such a reasonable price would receive our Price Tip Award. Given the entirely missing OC options we have refrained from however. But ASRock isn’t responsible for lack of overclocking options, because the H170 chipset does not allow overclocking at least for now. If options like for the Intel H97, H87, etc. can be unlocked with a BIOS update soon or later, remains to be seen.

Interesting is also the performance comparison of DDR3 vs DDR4 on the identical motherboard, especially when using the internal graphics unit. Because when using 8 GB DDR4-2133 instead of 4 GB DDR3-1333 memory, depending on the benchmark we achieved a performance increase of up to more than 13% with the internal graphics unit. Also the power consumption with 8 GB DDR4 was approximately 10% lower than with the installed 4 GB DDR3.

All in all the ASRock H170 Combo is an inexpensive motherboard to switch to a current Intel Skylake PC system. Who like to continue using its DDR3 memory for some time and can abdicate however on OC options, integrated USB 3.1 and optical S/PDIF, can do an inexpensive upgrade with the ASRock H170 Combo. However, if you like to overclock, you should buy a Z170 motherboard, like for example, the previously tested ASRock Z170 Extreme6.

Here you can buy the ASRock H170 Combo motherboard. 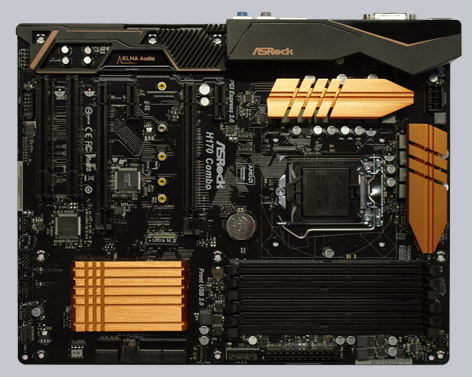