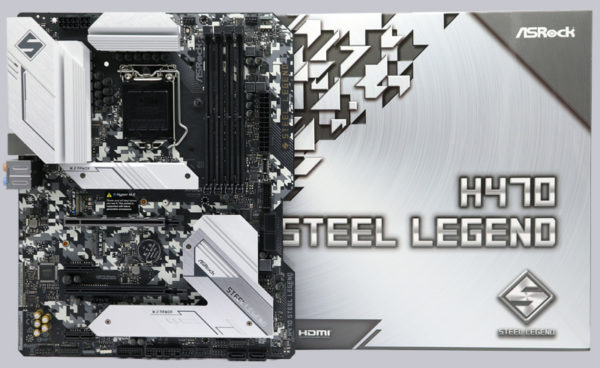 The ASRock H470 Steel Legend offers one M.2 2230 slot for WIFI/BT and three fast Ultra M.2 slots for PCIe Gen3 x4 modules with up to 32 Gb/s connection. On the following picture you can see the PCIe 3.0 Steel slot and the M.2 slots, even two M.2 sockets were equipped with a heat sink each. The lower Ultra M.2 slot shares the cooler with the H470 chipset. We tested the H470 Steel Legend with a Crucial P2 500GB M.2 NVMe SSD, as you can see here with the M.2 coolers (the so-called M.2 Armors) removed. 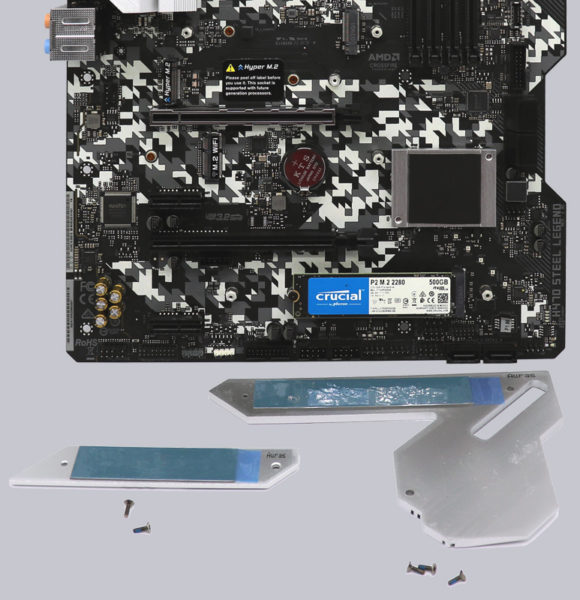 Depending on the CPU even up to PCIe Gen4 x4 with up to 64 Gb/s connection will be supported. ASRock calls this socket instead of Ultra M.2 now Hyper M.2!

As soon as you remove the chipset cooler including the M.2 cooler, another special feature is immediately noticeable and that are the five small SMD RGB LEDs, which were placed under the cooler like on the B460 Steel Legend. This brings us to the RGB lighting of the ASRock Steel Legend motherboard. 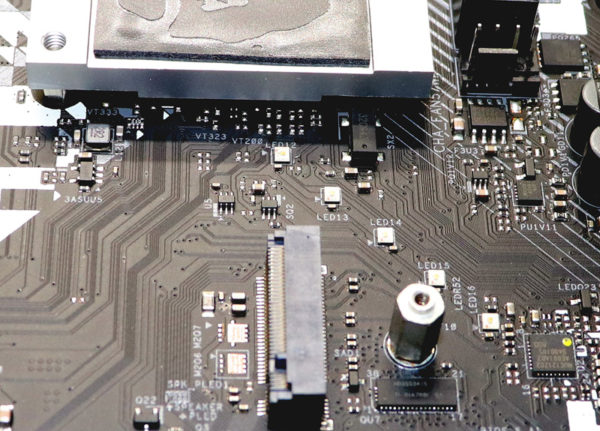 RGB lighting has already become a selling point for many people and ASRock has also done a lot in this area. You can connect conventional 5050 RGB stripes to the white 4-pin 12V RGB header, for example to illuminate the housing. Additionally, there is a grey polychrome RGB connector, which supports individually addressable LEDs with addressable RGB stripes via the WS2812B. There is also an RGB and an aRGB header in the upper corner near the CPU cooler connector.

In addition, ASRock has also installed on this ASRock H470 Steel Legend motherboard a lot, to be exact eleven, more aRGB LEDs on the bottom side in the area of the SATA cutout. 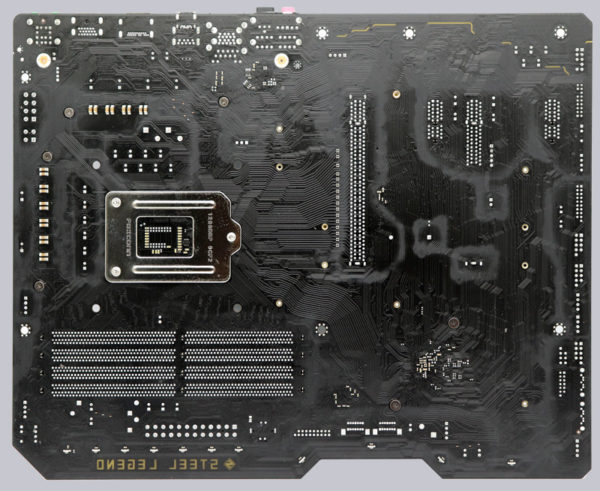 Because already addressable RGB LEDs are mounted under the chipset cooler and under the ASRock H470 Steel Legend, there is already an effective lighting of the motherboard after the first switching on. 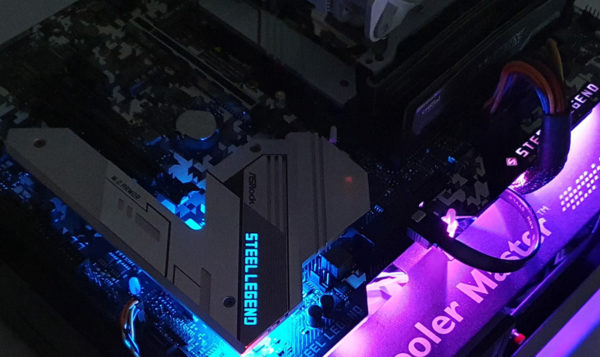 The RGB headers and the integrated RGB LEDs are controlled by UEFI or by the included ASRock Polychrome RGB LED software. There you can select for example the colors in a RGB color selector and you can set whether the RGB headers should be controlled separately or together with the RGB lighting under the chipset cooler and the lettering. The lighting can also be completely deactivated. 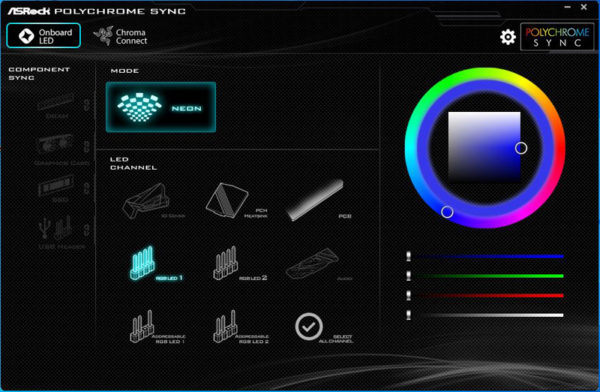 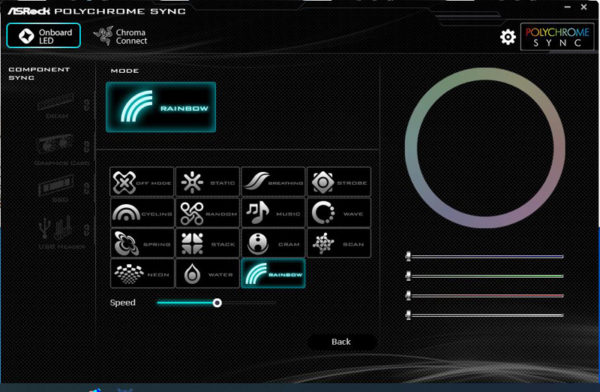 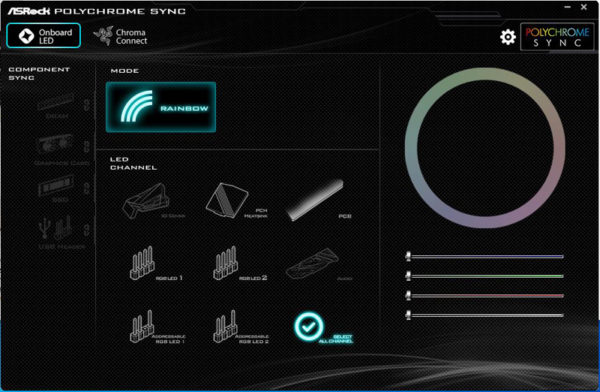 As before, up to 100 addressable LEDs can be individually addressed. 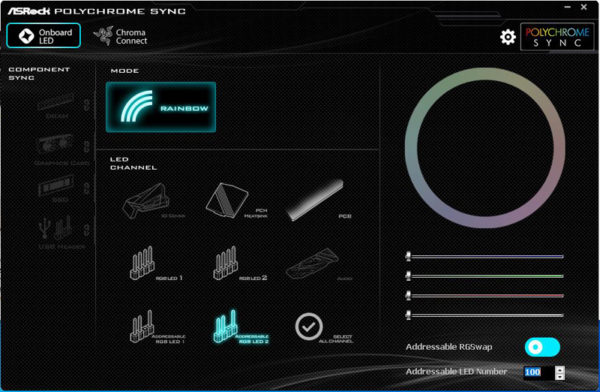 And to get a small impression of the very special ASRock H470 Steel Legend effects, we have created another video here.

Here you can see the two additional RGB and aRGB connections on the right, one of the two internal USB3.2 Gen1 headers and the USB3.2 Gen1 Type-C front panel connector on the left and the 24-pin ATX power connector in the middle.

The picture shows the side view of the mainboard with the two heat sinks on the MOSFETs.

Here you can see the two dismounted aluminum heat sinks, which are pressed together with the heat conducting pad onto the voltage converters. 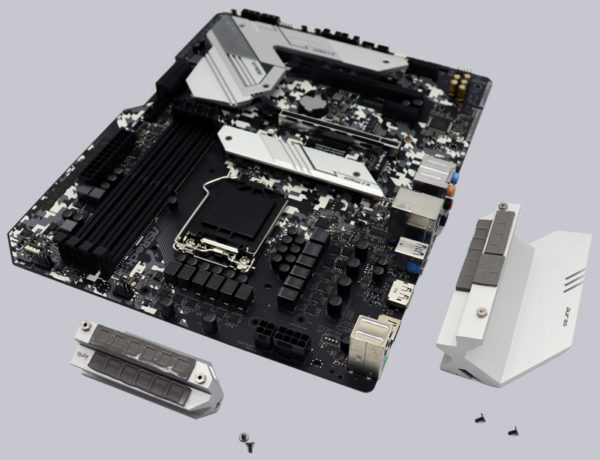 The voltage converter section has a typical design, whereas the ASRock H470 Steel Legend VRM consists of 11 phases (8+2+1 CPU+SoC+SA) and is therefore much better equipped than the ASRock B460 Steel Legend! 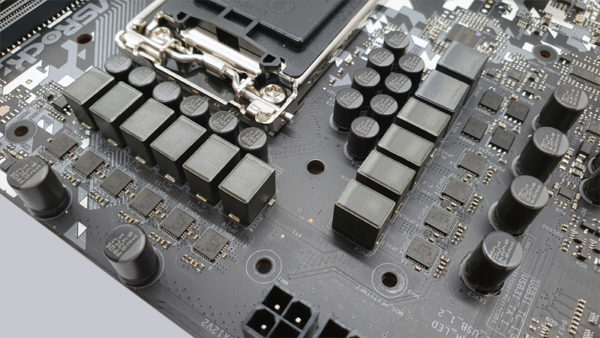 Here you can see again the 50A SiC632A MOSFETs of the so-called Dr.MOS Power Design Power Stage with the ISL69269, which among other things are responsible for the power supply of the Intel Comet Lake-S processor on the Intel LGA 1200 socket. 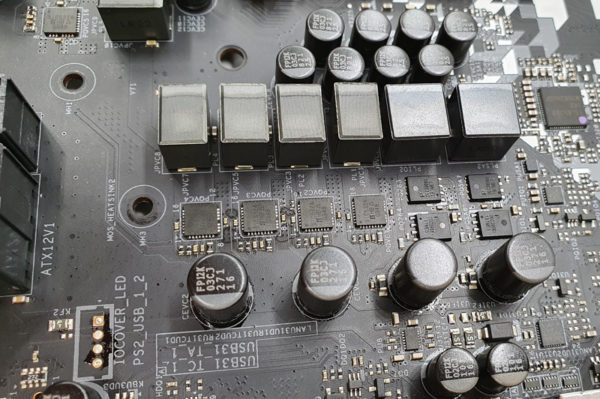 ASRock H470 Steel Legend has many features such as ASRock A-Tuning Tool, ASRock Instant Flash, ASRock Internet Flash, ASRock Easy RAID Installer, 11 Power Phase Design, RGB, Polychrome RGB and ASRock FAN-Tastic Tuning.
The ASRock H470 Steel Legend Board can be equipped with up to four DDR4 modules and is upgradeable up to a maximum of 128 GB memory depending on the operating system used (see list). Here you can see a picture of the four DDR4 memory slots with Dual Channel support.

The ASRock H470 Steel Legend board can be equipped with up to four DDR4 modules and is upgradeable up to a maximum of 128 GB memory depending on the operating system used (see list). Here you can see a picture of the four DDR4 memory slots with Dual Channel support. 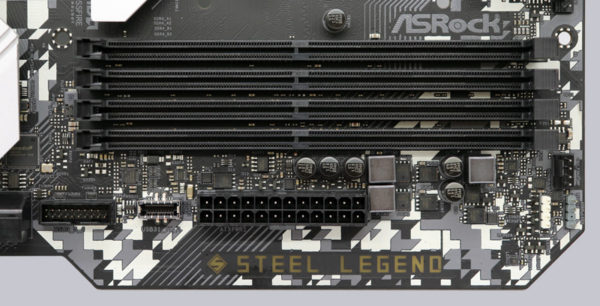 The Intel LGA 1200 motherboard supports DDR4 memory modules and can be optimized for DDR4-2933 Quad Channel modules depending on the CPU in the BIOS.

The ASRock H470 Steel Legend offers a total of six SATA3 ports, four angled and two straight. By the way, the cutout of the ASRock Steel Legend board can be very helpful when routing the SATA cables to the back of the case.

In contrast to the previously tested ASRock B460 Steel Legend, the ASRock H470 Steel Legend offers a CSM in addition to the UEFI boot mode, allowing booting into legacy BIOS mode without converting the MBR UEFI compliant to GPT.

The Intel B460 chipset supports RAID. The appropriate RAID drivers can be installed via the Easy RAID Installer point in UEFI. The drivers for Windows 10 are delivered on DVD and are also available for download on the ASRock support page. The Microsoft Windows 10 installation is currently preferred. 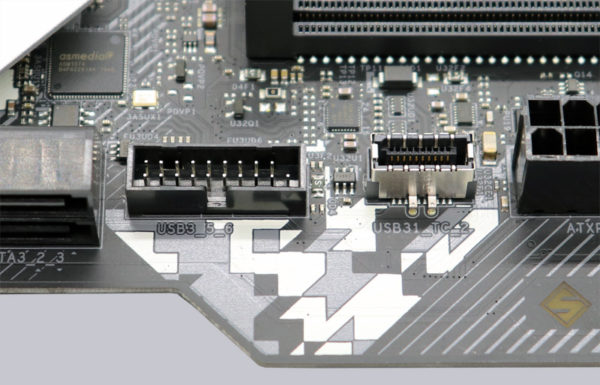 The ASRock H470 Steel Legend has a Realtek Dragon RTL8125BG chip with which the 10/100/1000/2500 network port at the ATX panel is realized. The Realtek LAN port is WoL capable, offers LAN cable detection, custom prioritization, supports energy efficient Ethernet according to the 802.3az standard, PXE and more. 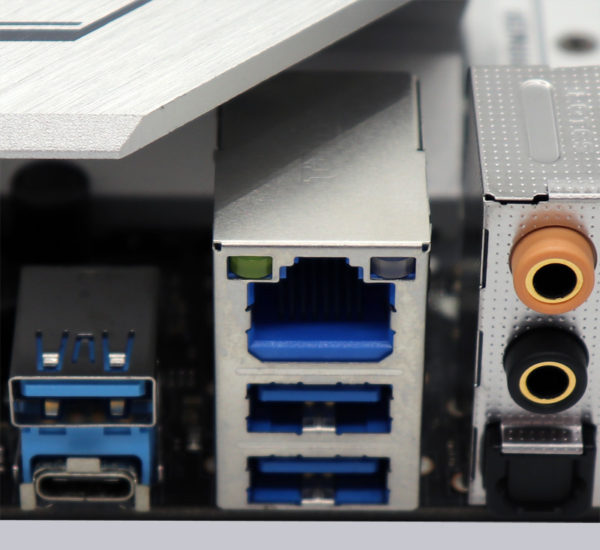 The ASRock H470 Steel Legend motherboard has the better Realtek ALC1200 audio codec with content protection, 120dB SNR DAC, which supports 7.1 surround sound and outputs it for example analog over 5x 3.5mm jacks on the ATX panel or over the internal front panel audio connector. There is also an optical SPDIF digital output and premium Blu-Ray support as well as Nahimic audio software. This makes an additional sound card with digital outputs unnecessary for most users. 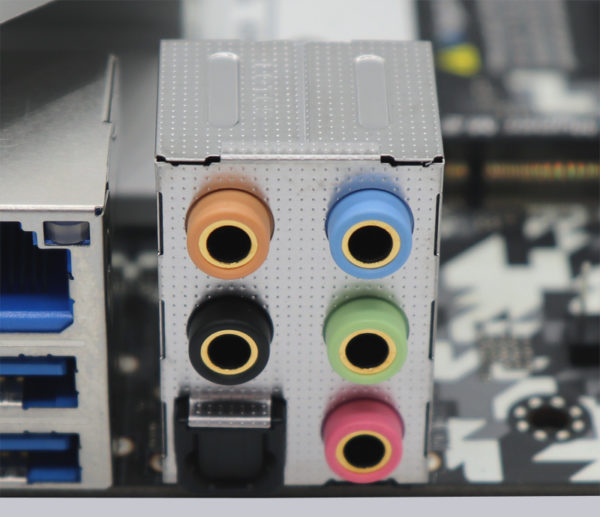 Now we come to the Intel LGA 1200 CPU socket. The new 10th Gen LGA1200 socket looks similar to the LGA1151 socket and the 9th Gen LGA1151 v2 socket of the previous generations, but they are not compatible with each other! So you have to install a new Intel Comet Lake-S processor or similar to work on the Intel H470 motherboard. The socket was provided with a lever, which presses the relatively small CPU evenly on the pins in the socket. As always, do not touch the contacts during installation or even bend the contacts in the socket. When storing or transporting, it is imperative that the protective cap is mounted on the socket. If pins are bent and the mainboard doesn’t work anymore, we help with advices in the Intel Forum. 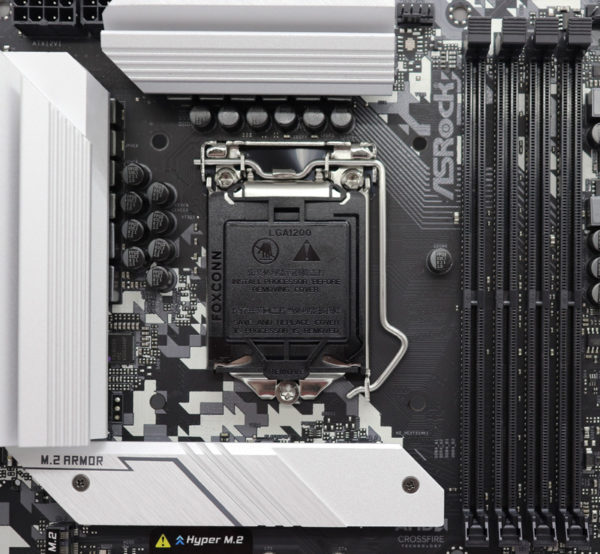 We have equipped the test system with an Intel Core i5-10500 CPU. 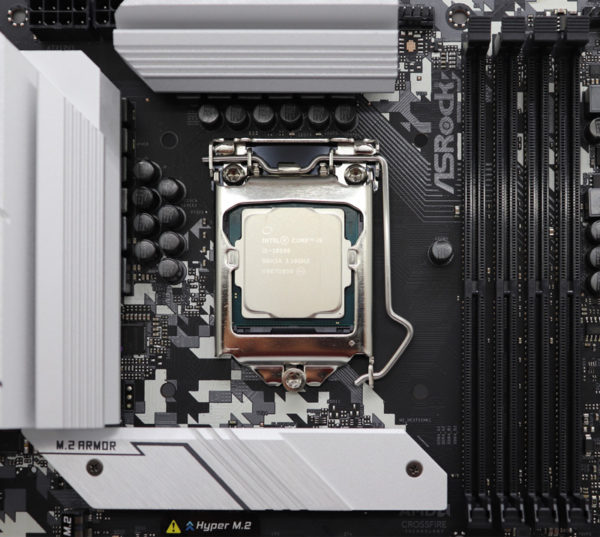 Current Intel LGA 1200 CPUs only support the Dual Channel Mode. So the two memory modules on the Intel H470 motherboard are used to get Dual Channel support. 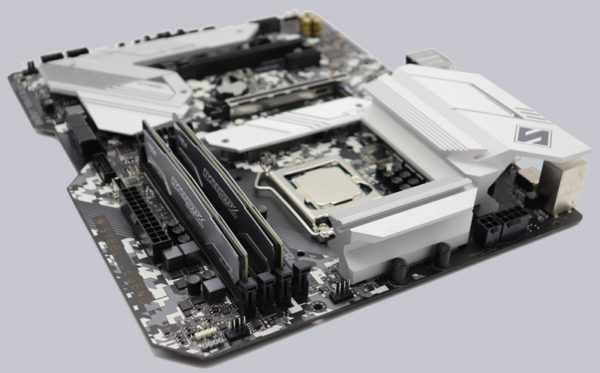 Here you see again the two DDR4-2400 4GB modules from Crucial and the Intel Core i5-10500 CPU in the ASRock H470 Steel Legend motherboard. 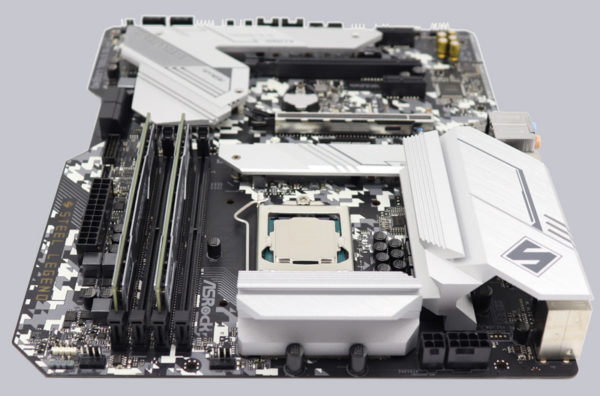 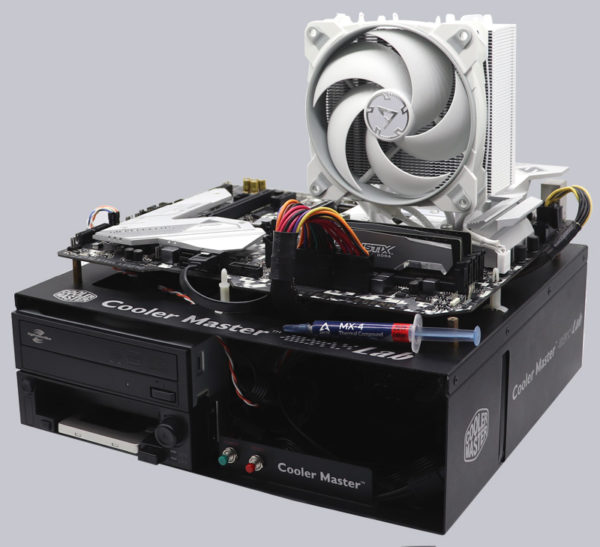 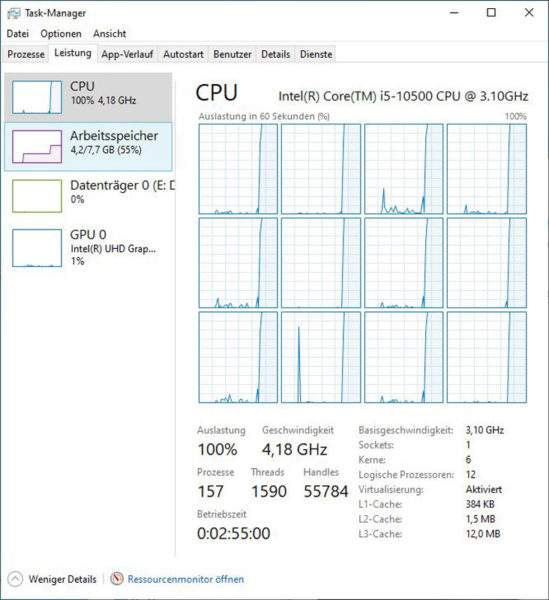 As you can see on the thermal image of the ASRock H470 Steel Legend PC under Prime95 load, the heat of the voltage regulators and coils is dissipated well. 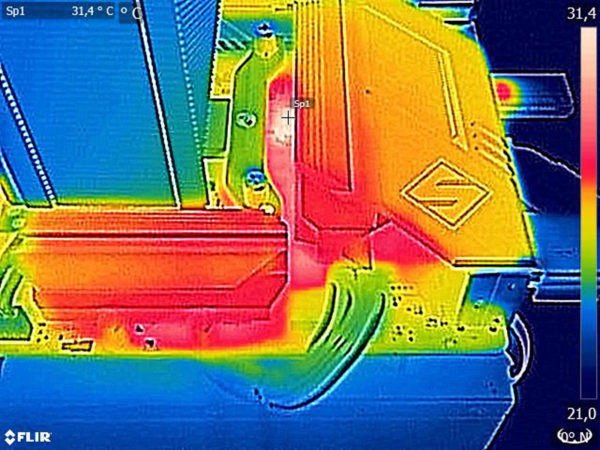 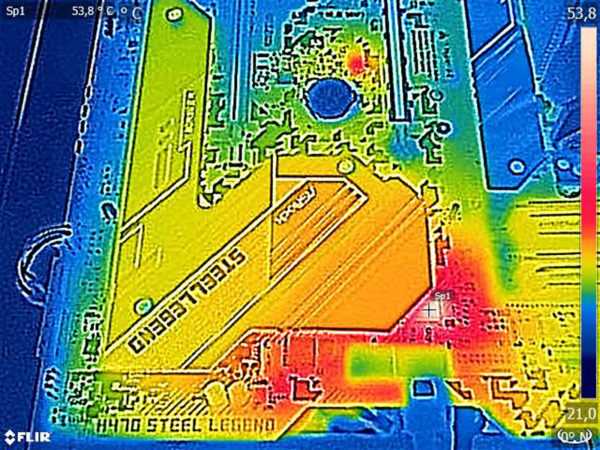