Already on the black box of the ASRock Z170 Extreme6 we can see, that this board is “Stable and Reliable”, from the ASRock Super Alloy series and providing special features we want to preset you later on. 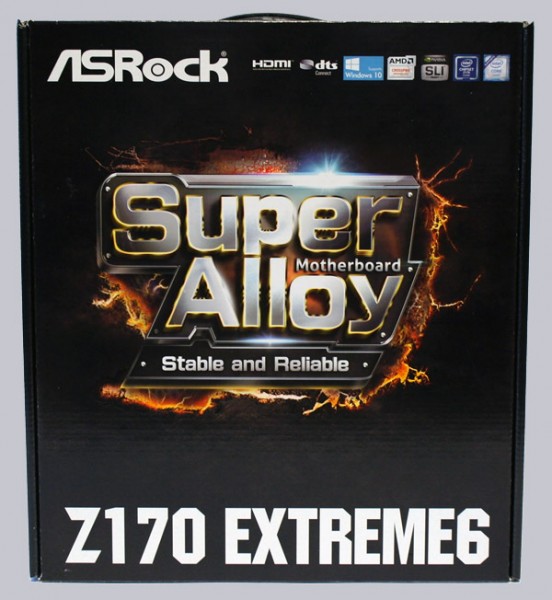 The back of the package is already showing some powerful features of the ASRock Socket 1151 motherboards and the scope: Designers and Enthusiasts. 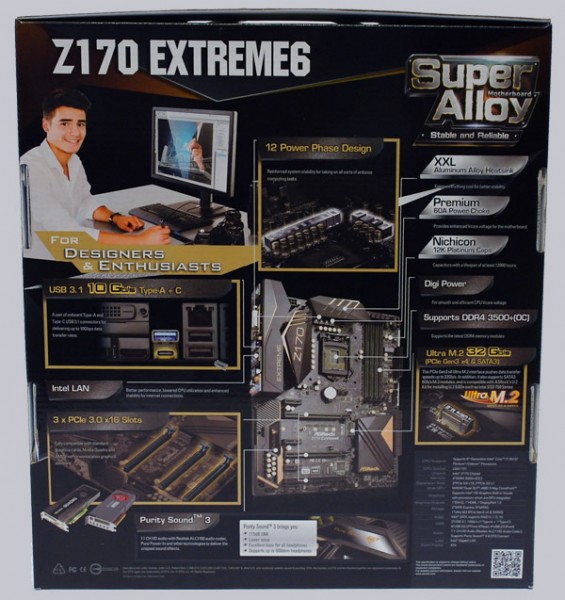 Let us open the box and take a first look at the content that is relatively spartan. 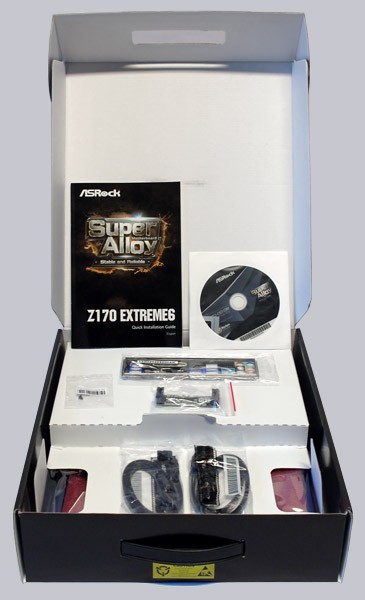 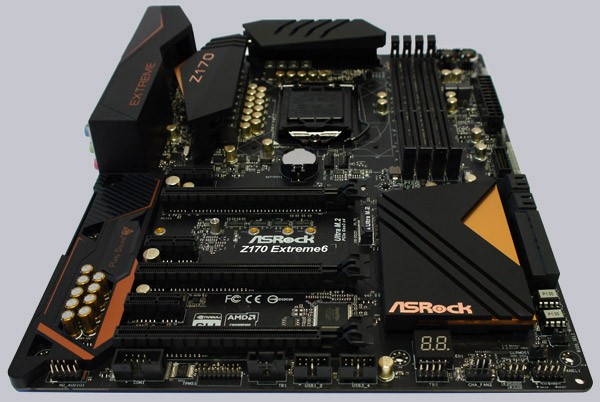 Here you can see the Dr. Debug 7-segment LED P.O.S.T. code display, a stylish ASRock lettering and rightmost two socketed BIOS modules, but more on that on the UEFI review page. However, we miss the useful HDD Saver power connector, which switched on hard drives during operation by software and can turn them off.

The ASRock Z170 Extreme6 has no switch for both UEFI BIOS ICs, but the backup BIOS jumper should be enough for most users. 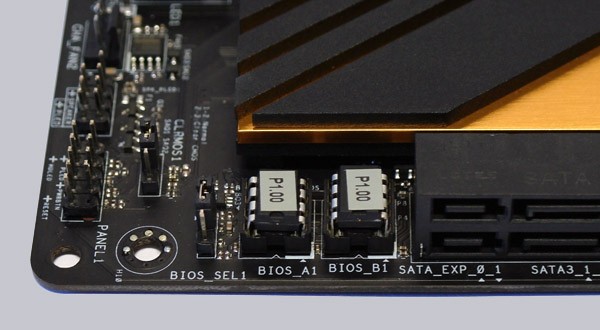 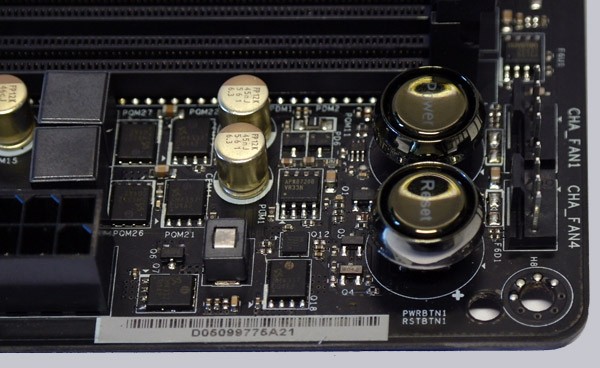 In addition, the buttons are LED back lit and provided with the Power and Reset lettering. 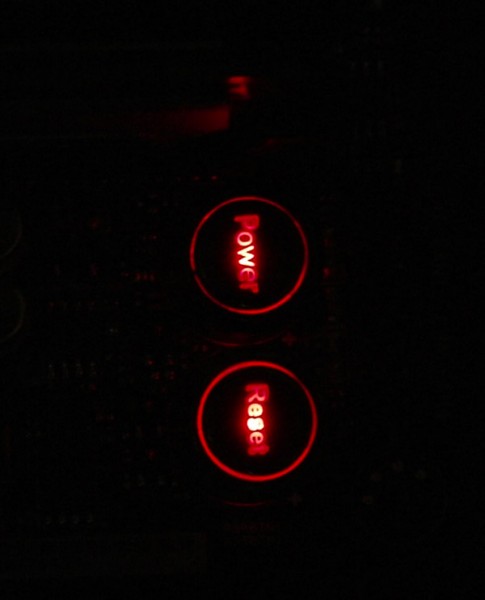 Furthermore, the fast Ultra M.2 Slot PCIe Gen3 x4 modules with up to 32 Gb/s connection has been integrated on the Z170. 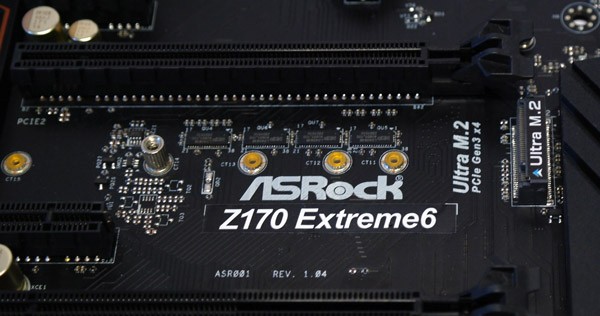 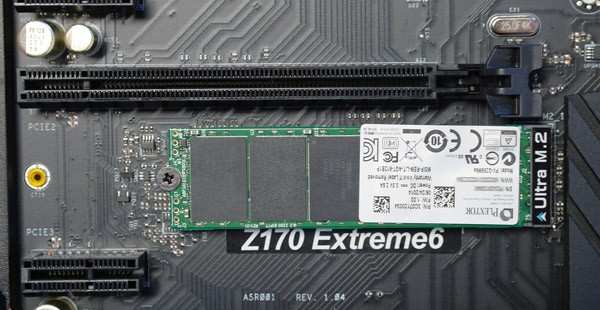 Here you can see the internal USB3.0 port, above the high quality 12K platinum capacitors, next to them the 24-pin ATX power connector and in the corner two of the six 4-pin fan headers.

Here you can see a side view of Super Alloy motherboard with the large XXL heatsinks made of aluminum alloy, which were very carefully mounted on the MOSFETs and the chipset.

Here you can see the LGA1151 socket, which is not backwards compatible with the LGA1150 socket. 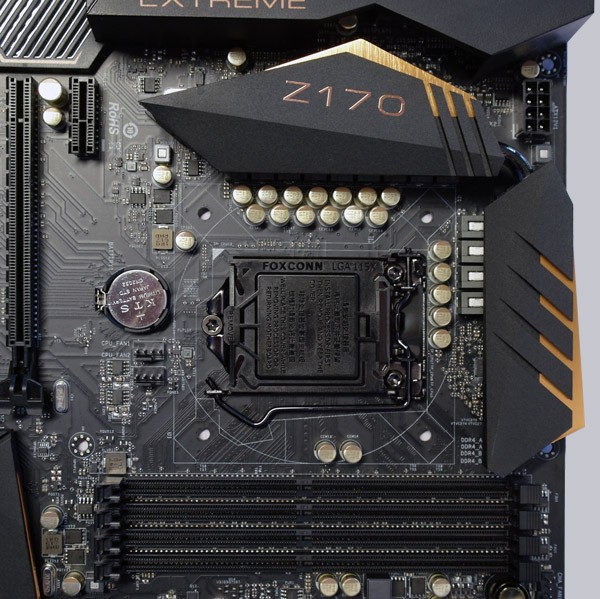 So let us put in the Intel Skylake CPU and remove the plastic cap. 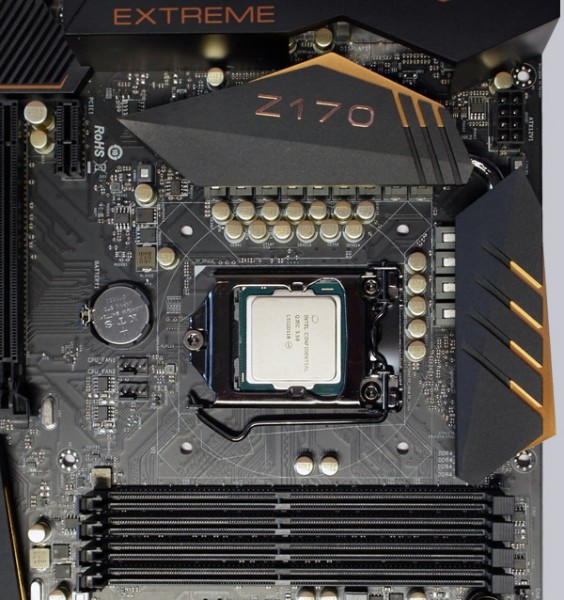 Add the four DDR4 modules – because Skylake supported as Haswell-E the DDR4 memory – however not with quad-channel support, but with dual-channel support. 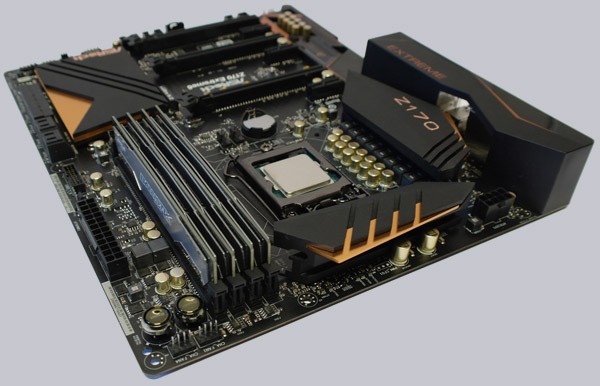 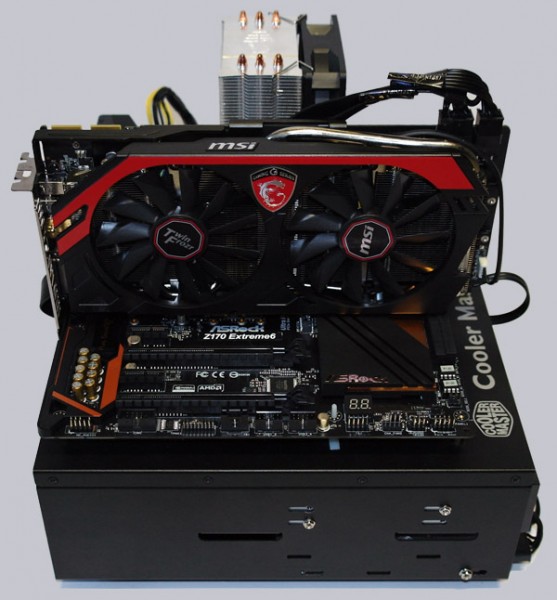 The ASRock Z170 Extreme6 board can be upgraded with up to four DDR4 modules and is depending on your operating system (see list) upgradable to a maximum of 64 GB of memory.

Here you can see an image of the four DDR4 memory slots with dual-channel support, for that you have to install the modules in the two black slots DDR4_A1 and DDR4_B1 or DDR4_A2 and DDR4_B2: 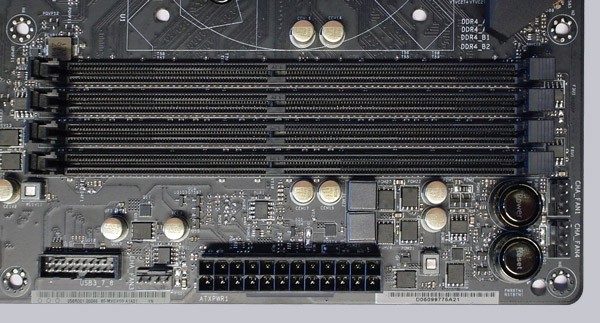 Thanks to XMP support (Intel Extreme Memory Profile) XMP memory modules are correctly set with a mouse click in UEFI and there are of course more memory adjustments and/or more OC options, but more on that later on the UEFI OC page. What specific RAM modules are officially supported, you should read before buying on the ASRock memory support page.

The ASRock Z170 Extreme6 offers 8 angled SATA3 ports and two shared SATA Express 10 Gb/s ports. Six of them are realized via the Z170 chipset and two of them over the ASMedia ASM1061 chip.

Here you can see the eight SATA3 ports, you should run the Boot Device on SATA3 0:

The SATA 3 ports SATA3_0 to SATA3_5 (Intel Z710) support RAID 0, RAID 1, RAID 5, RAID 10, Intel Rapid Storage Technology 14, Intel Smart Response Technology, NCQ, AHCI and the Hot Plug function in AHCI mode (AHCI stands for Advanced Host Controller Interface and can, and should be selected with a SSD in UEFI especially). Thanks to the UEFI BIOS also drives with more than 2 TB can be used with Windows 10 x64, Windows 8.1 x64 and Windows 7 x64.

Drivers can be installed via the Easy Driver Installer or Easy RAID Installer point in UEFI. They are also supplied with a DVD for both 32 bit/64 bit Windows 7, Windows 8.1 and Windows 10 and can be downloaded from the ASRock support. 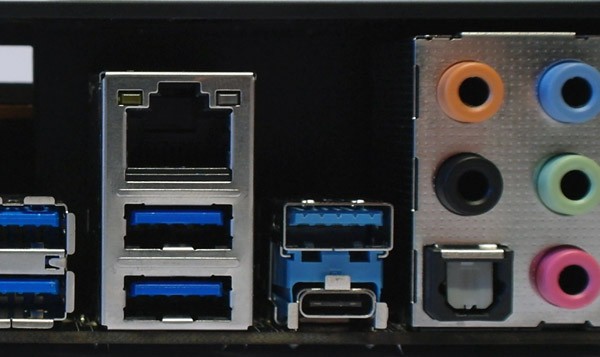 The serial COM port is available as an internal motherboard connector.

The ASRock Z170 Extreme 6 mainboard provides the ALC1150 Audio Codec with Content Protection, 115dB SNR DAC, TI NE5532 premium headset amplifier and Purity Sound 3, which supports 7.1 surround sound output on the 5x 3.5mm jacks at the ATX panel or over the internal front panel audio connector. Furthermore, there is an optical SPDIF digital output and premium Blu-Ray support. Thus, an additional sound card with digital outputs for most users is not necessary.