Who like to purchase a current Intel Z97, X99, etc. motherboard or get at least information about an update, certainly have discovered that some motherboards are coming with a so-called M.2 socket. But what exactly is M.2, which devices can you install and how fast is the transfer rate of this M.2 socket ? These and many other questions will we be explained in this very special review of the Plextor M6e 256GB PX-G256M6e PCIe M.2 2280 SSD and of course also the performance of the new M.2 SSD will be tested in practice. We are excited ! 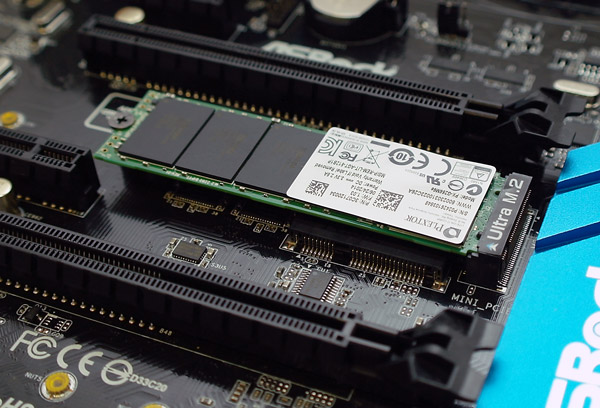 Many thanks for the support with the Plextor M6e 256GB M.2 SSD by the manufacturer Plextor.

Here you can order the Plextor M6e SSD.

In this package came the tiny Plextor M6e M.2 SSD PCB. The plastic packaging can be opened easily by pressing the back part backwards. This is an exemplary blister packaging, which can be closed again even without any problems:

The Plextor PX-G256M6e M.2 SSD was delivered without additional accessories.

On the front of the contained Plextor M6e 256 GB SSD you can see the Plextor M6e label with a few technical data such as the voltage of 3.3V and the preinstalled firmware version 1.03, which we will update before the tests:

By the way, under the label is located the 512 MB DDR3 cache module. On the back you can see the Marwell 88SS9183-BNP2 Dual Core Controller IC and four of the eight Toshiba toggle NAND modules of this PCIe SSD with 256 GB total capacity. The M.2 SSD features like the previous SSDs also a built-in 256-bit AES encryption:

Before it comes to the nitty-gritty, we like to provide but some background information, first. Because regarding this SSD type, there are a few names that might be perhaps a little confusing. Let’s start with M.2 … M.2 replaces the previous mSATA standard, which was not only a bottleneck with its maximum SATA 6.0 Gbit/s connection, but also allowed only a SATA connection.

The new M.2 standard – also called NGFF – which stands for next generation form factor – allows both, the use of M.2 SATA3 modules as well as M.2 PCI Express modules and with a connection of four PCI-Express lanes, so x4. For the M.2 Socket there are by the way not only flash modules, but also e.g. M.2 Wi-Fi modules and M.2 Bluetooth modules.

The tested Plextor M6e 256 GB SSD is connected with Gen2 x2 and allows theoretical transfer rates of up to 10 GB/s. For a more easily check if the connection setup is correct, the Plextor BIOS shows the connection rates during the boot process. You should check whether PCI Express Gen02 x02 is listed, to achieve the highest possible performance with this SSD. Unfortunately currently there is no option to turn off or hide this bootscreen, after checking it once.

The ASRock Z97 Extreme6 motherboard used in the test has even a so-called Ultra M.2 Socket, which supports PCIe Gen3 x4 and could allow up to 32 GB/s -so the motherboard should not be a bottleneck.

So before buying, you should take a look, if this module size is supported by the respective motherboard or notebook, Tablet, etc., or may be buying a PCI Express card is required, it can be ordered for example here

In our test, the Plextor M6e 256GB PCIe M.2 2280 SSD is installed directly on the motherboard without a PCI Express card. 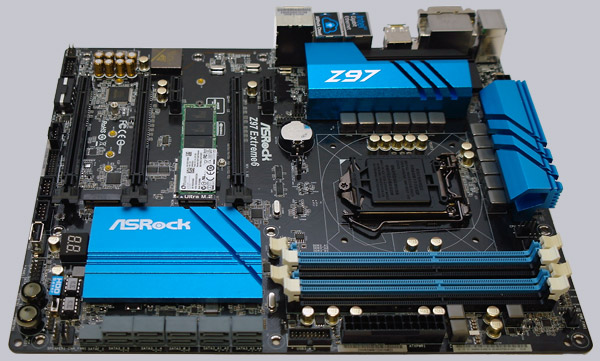 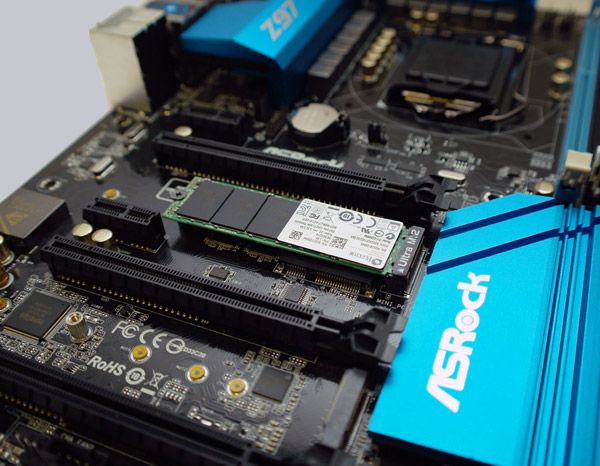 The M.2 PCIe PCB is just inserted angular in the M.2 Socket, then carefully press down and mount it with the screw supplied with the motherboard – btw. in the right of this image a second M.2 slot with different lengths of 30, 42, 60, 80 and 110 mm can be seen. 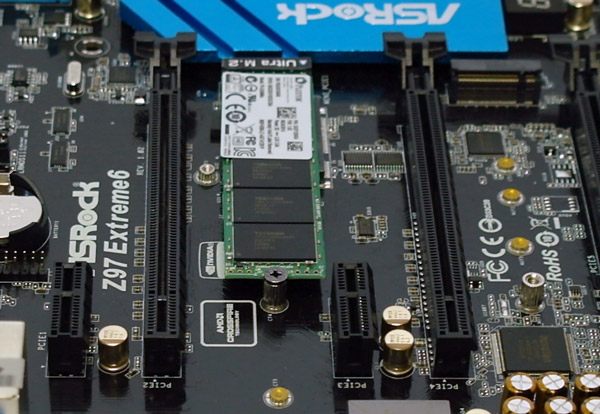 Here you can see again the screwed M.2 PCIe SSD on the Z97 motherboard.

We help if you have any questions on this topic and all other questions anytime 24/7 in our PC Forum.