As already explained in the unboxing video on our OCinside YouTube Channel, you can use not only the latest Intel Kaby Lake processors on this Z270 board, but also the previous Intel Sky Lake processors. 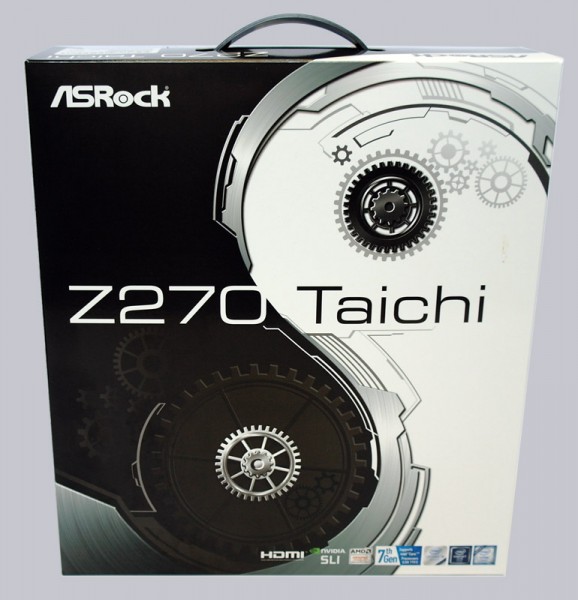 The back of the package shows some features like WiFi, Dual LAN, Aura RGB LED, Triple Ultra M.2 and much more. 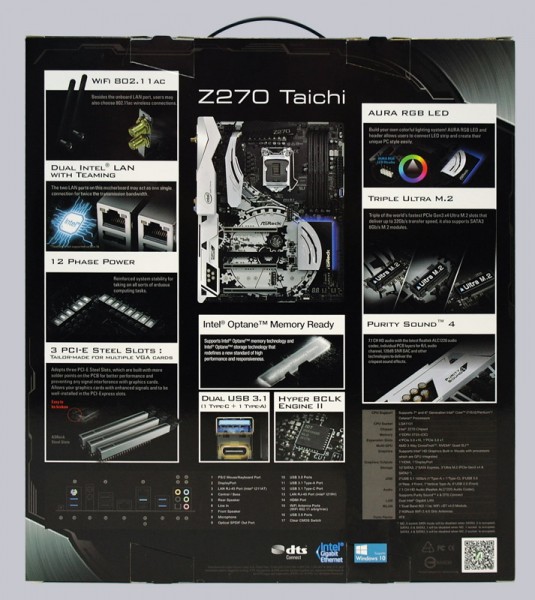 After removing and opening the box, we take a first look at the contents. 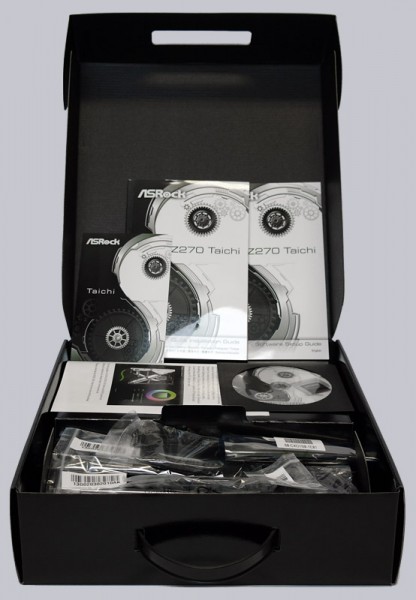 As most high-quality ASRock motherboards, the Z270 Taichi is bordered in foam for safe transport. 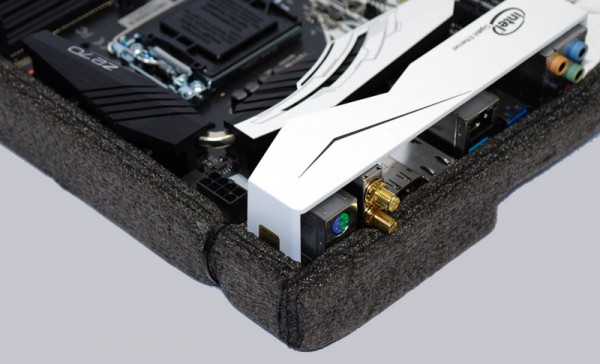 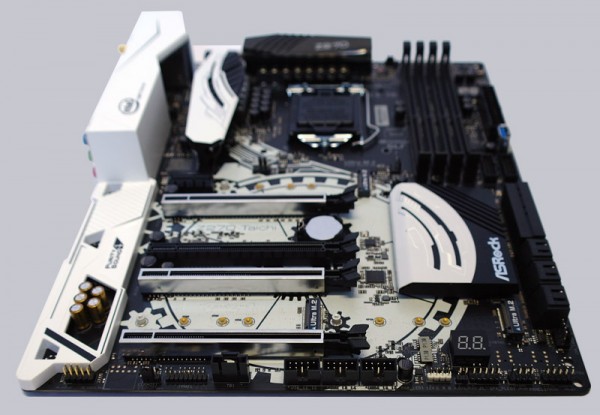 On the picture you can see the new PCIe Steel Slots and a M.2 slot, where you can install conventional 2230/2242/2260/2280 M.2 modules and in the right is pictured at the top by the way the IDT 6V41642B BCLK clock generator, which ensures an extremely high BCLK. 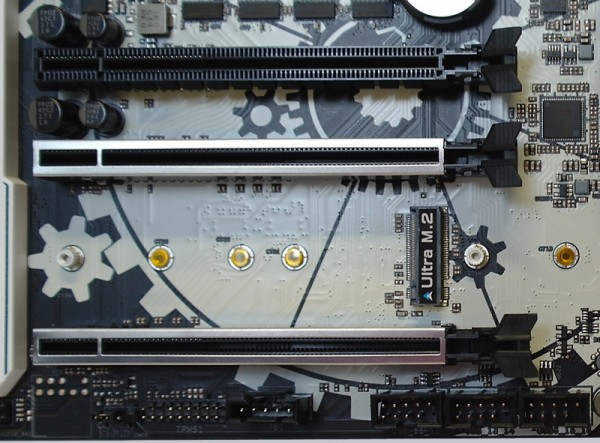 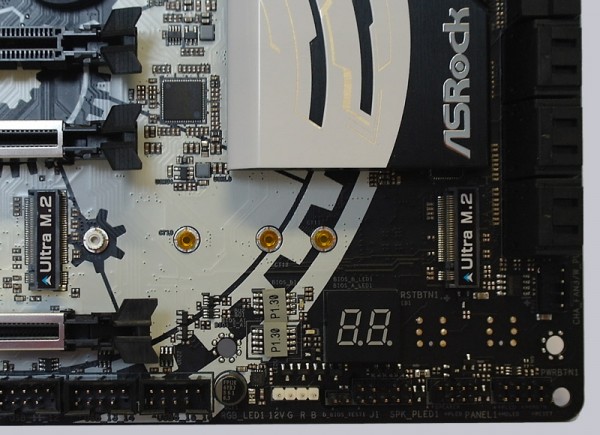 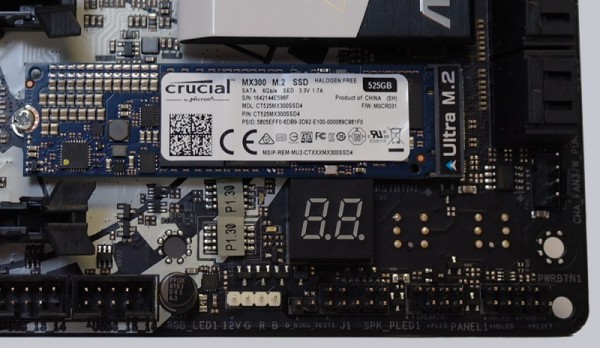 On this Board, yesterday, we have created the interesting M.2 thermal video with the thermal imaging camera.

This white 4-pin 12V RGB header is also new. Here, you can connect conventional RGB stripes in order to lighting, for example, the chassis.

ASRock has also RGB LEDs integrated under the chipset heatsink, which can be controlled as desired. The following image shows a few freely-selected colors on the previously tested ASRock Z270 Killer SLI. Here you can see the 24-pin ATX power connector beneath to the internal USB3.0 connector and some of the high-quality capacitors.

The RGB LED header and the integrated RGB LEDs are controlled by the supplied ASRock AURA RGB LED software or over the BIOS – in the course of this review, we’ll explain you all UEFI settings. 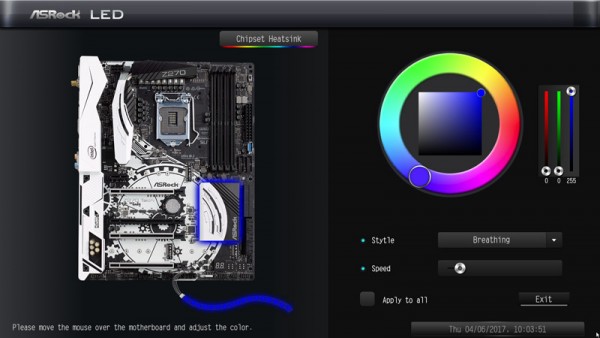 Here you can see the two internal USB3.0 header, in addition the vertical USB3.0 Type-A port and the 24-pin ATX power connector as well as a few of the high-quality Nichicon 12 K Black Caps capacitors.

Here you can see a motherboard side view with the protective I/O panel cover (I/O Armor) and the large XXL heat sink made of aluminium alloy, which is carefully installed on the MOSFETs. 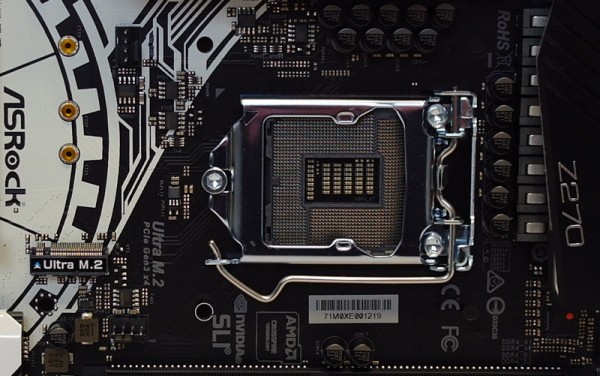 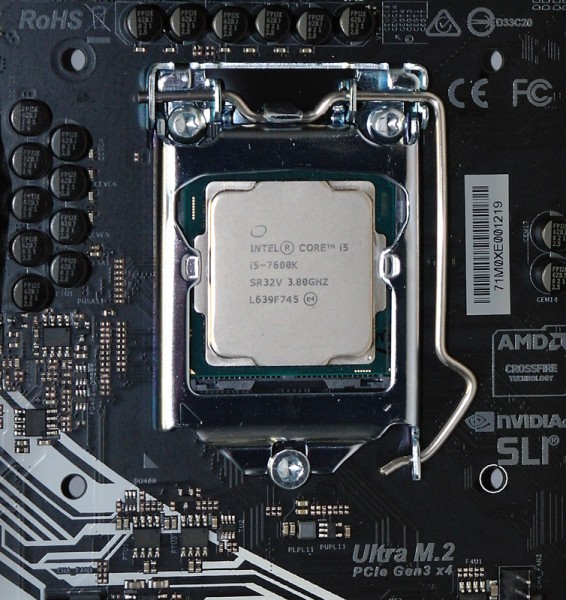 This is how two of four possible memory modules have to be installed on this Z270 motherboard to get dual channel mode support. Quad channel unfortunately is still not supported by Z270 motherboards. 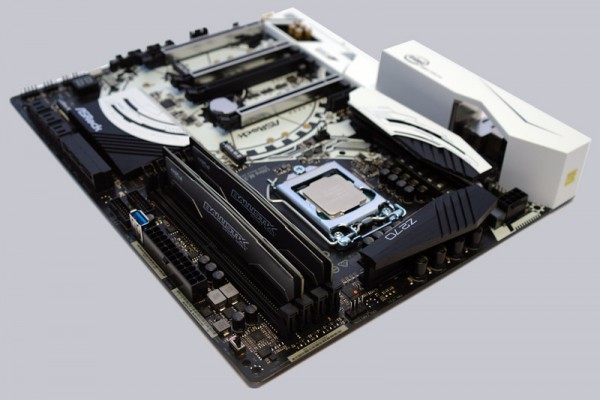 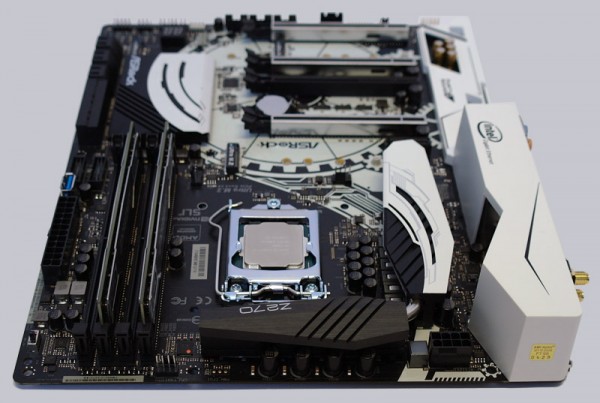 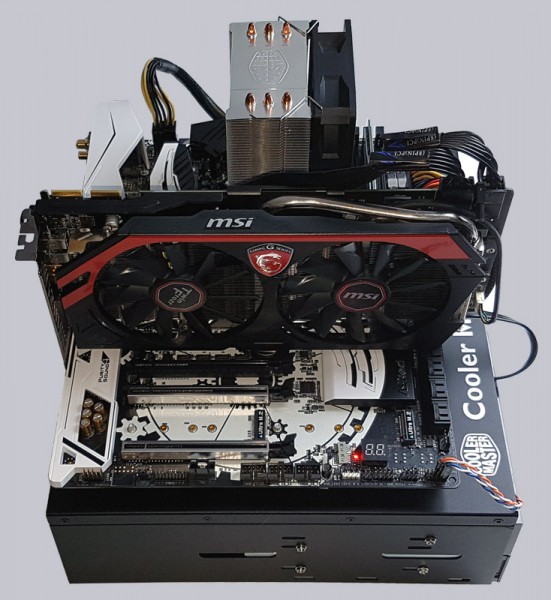 And here you can see the Intel test system with the new Icy Dock MB171SP-B Turbo Swap for fast replacement of SSD and HDD again from front, this time without graphics card. 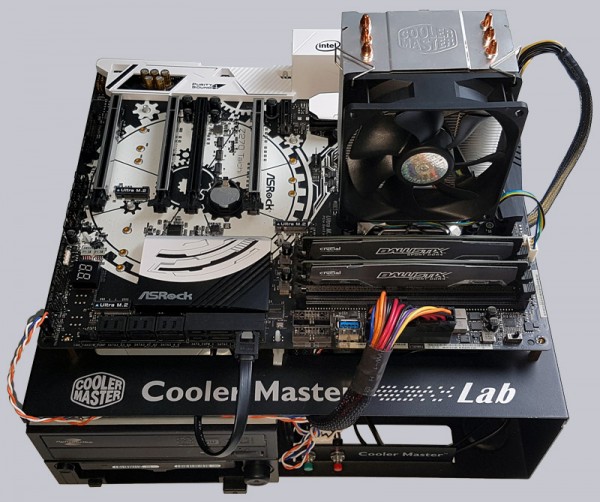 Here you can see a thermal image of assembled board with graphics card. 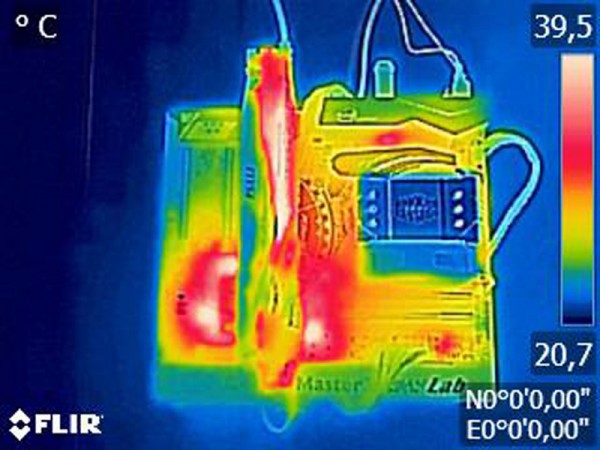 And so that you can better see how the distribution of heat on the ASRock Z270 Taichi motherboard, we have included a heat image without graphics card and CPU cooler. Even if there are some protections – please don’t imitate! In the left part you see the Intel Z270 heatsink, above the ASMedia ASM1184e PCI express bridge controller, in addition ASMedia ASM1074 USB 3.0 controller, right the CPU and directly above the voltage converter and 60A power chokes. 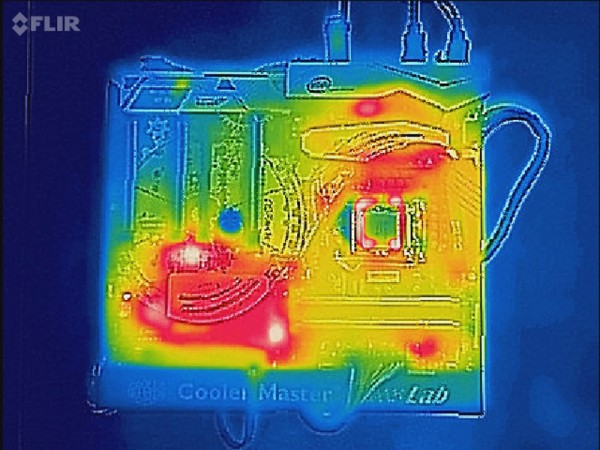 Even the heat spreader of the Intel Core-i5 7600K Kaby Lake CPU is already within a few seconds up to over 70°C, not to mention that the CPU core temperature is much higher. By the way, the medium HS part of the CPU is incorrectly displayed blue on thermal images, since the surface is IR reflective. 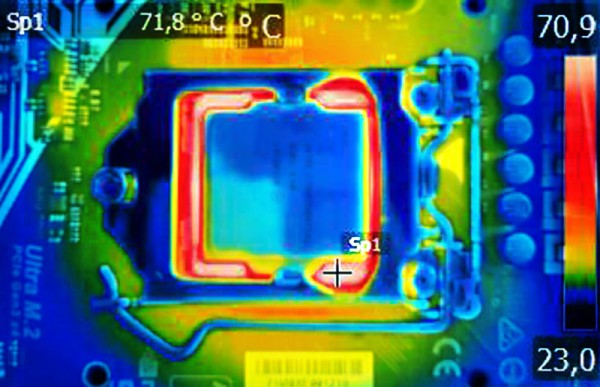 The board offers four PCI Express 3.0 x16 slots for AMD CrossFireX or nVidia SLI, whereby either one graphics card with x16 bandwidth or two graphics cards with x8 lanes bandwidth can be installed. The motherboard comes with a SLI HB Bridge. More SLI/XFire switch cards are not required to obtain optimum performance for single or CrossFireX. In addition to the PCI Express 3.0 slots, there is a PCIe 3.0 x1 slot.

The ASRock Z270 Taichi can be equipped with up to four DDR4 modules and is expandable depending upon operating system used (see list) up to maximally 64 GB memory.

Here you can see a picture of the four DDR4 memory slots with dual channel support, you should install them first in the slots DDR4_A2 and B2 or A1 and B1:

The SATA 3 ports are supporting RAID 0, RAID 1, RAID 5, RAID 10, Intel Rapid Storage Technology 15, Intel Smart Response Technology, NCQ, AHCI and the Hot Plug function in AHCI mode (AHCI stands for Advanced Host Controller Interface and can/should be selected in the UEFI). Thanks to the UEFI BIOS also drives with more than 2 TB for the installation of Windows 10, Windows 8 or Windows 7 x64 can be installed. Installing the drivers was absolutely no problem with Windows 10 and the Windows 10 installation was done very quickly. At review date, there was only beta drivers for Windows 7 HD 630 video card available, so we have installed Windows 10 for the Integrated GPU tests. 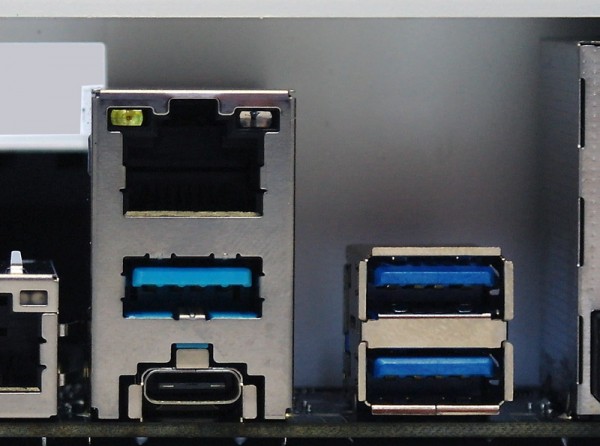 The ASRock Z270 Taichi motherboard is equipped with the ALC1220 audio codec with content protection, 120dB SNR DAC, TI NE5532 Premium Headset Amplifier and Purity Sound 4, which supports 7.1 surround sound for example analog over 5x 3.5mm connectors on the ATX panel or over an internal front panel audio connector. Additionally, there is an optical SPDIF digital output and premium Blu-Ray audio support. So most users do not need to buy an additional sound card with digital outputs.