At this point, thanks again to Futuremark 3DMark benchmark for the provision of the tool.

All benchmarks has been tested with the following hardware and software: 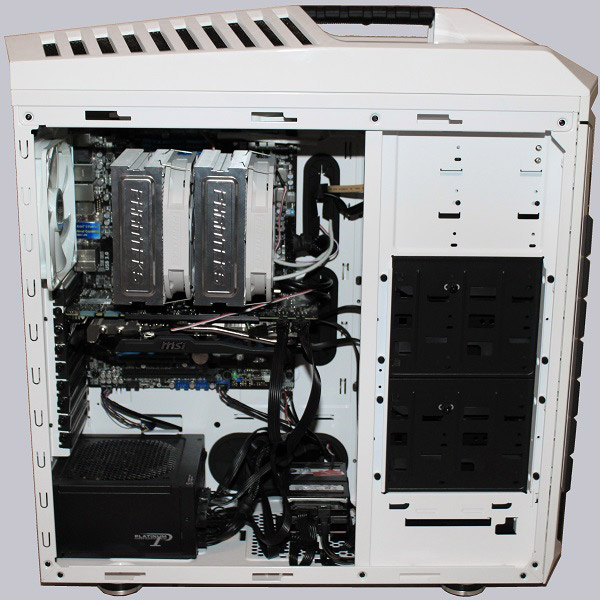 All tests were conducted with a power limit of 100%, and a target temperature of 82°C. Unfortunately, the GPU frequencies of each tool were measured differently because of the dynamic clock adjustment. Here the manufacturer’s clock speeds are leading.

During the benchmark tests, the the MSI Gaming App mentioned at the previous page has been disabled in order to prevent distorted values.

Let’s move on to the 3DMark test “Ice Storm”, which is characterized by a virtual space battle. With the default settings here the card reaches a score of 150465.

The temperatures of the graphic card increased during the test up to 60° C at a fan speed of approximately 1300 rpm. 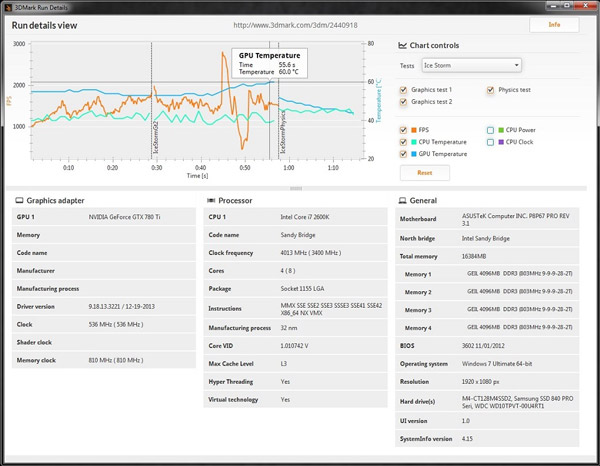 Now follow the test “Cloud Gate” in which a virtual Jumpgate catapults spaceships into the final frontier. Also in this test the graphics card did very well and achieved a score of 25287.

This test produced a little more power and therefore heat, the GPU heated to 65° C at a fan speed of approximately 1500 rpm.

We now come to the last 3DMark test, the “Fire Strike” in which an assassination attempt on a creature that might just escaped from Tron happens.

The card has not been warmer than at the previous test, reaching only 63° C at a fan speed of about 1500 rpm.

Plus, there’s a special option that starts the benchmark test “Fire Strike” in execution “Extreme”. In this test the full range of optical and technical possibilities is exhausted and takes the graphic card to its limits.

Only 5224 points were archieved, but in the overall comparison to other systems still represents a very good value.

These measurements show that the card is definitely possesses enough power potential to play eben tomorrow games smoothly and in very high details.

We now take a closer look at the cooling system and the thermal design of the card.

A skeptical look at the temperatures reached in 3DMark raises the idea that if all this was it already? What could test the cooling of a graphic card better than using the tool FurMark?

Not without reason there is a warning in the tool to be careful, because after the launch maximum power is thermally and electrically generated, which shows any hardware weaknesses immediately and mercilessly and might result in crashes.

We used the default settings, and the following results were obtained after 15 minutes of burn-in testing: 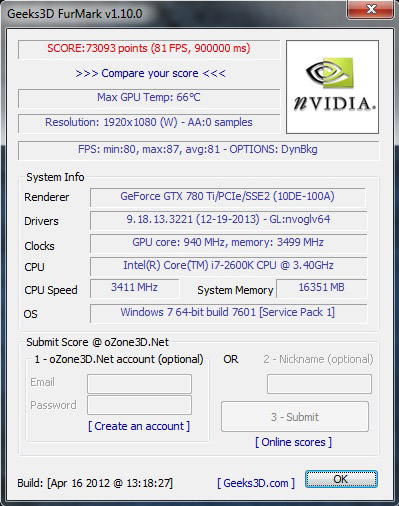 To keep the graphic card constant at 66°C, the fans needed a speed of 1900 rpm which does not result in a disturbing volume.

So you can say the MSI with Twin Frozr cooling is on a par with ASUS’ Direct CU and thus ensures optimum heat dissipation of the Kepler GPU.

The power consumption of the entire PC with the MSI GTX 780Ti Twin Frozr OC Edition Gaming Graphics Card convinced in idle mode at about 325 MHz with a low power consumption of approx. 68 watts. Under full load, our above listed test system reached a maximum of 390 watts with the graphics card. In OC mode with an overclocking from 980 to 1150 MHz, the PC required under maximum load max 411W.