The Synology DS214+ NAS was tested with the following system:

The initial setup of the RAID array in Mode 1 (Mirroring) with our two 3 TB hard drives took almost 8 hours to complete. The temperature of both disks rose during this period at 40°C, which is, due to the 8 hour torture quite okay. Thereafter, the Synology Disk Station 214+ is ready to use. 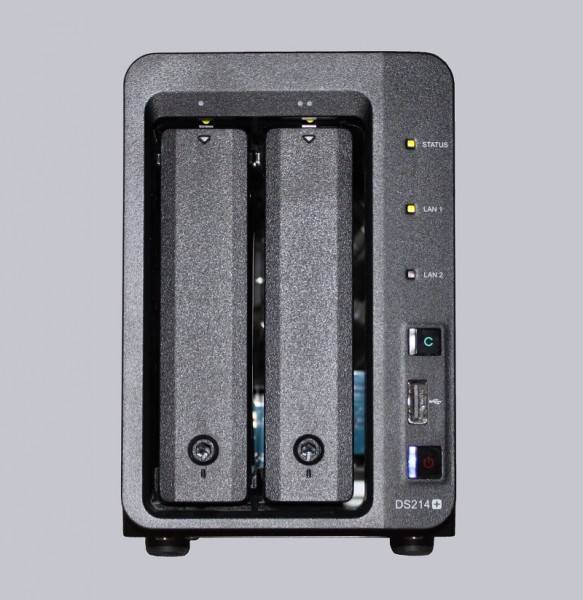 Once we have established all users, folders and shares, we filled the DiskStation immediately with data.
As a guideline, the following values are mentioned in the Synology documentation: 208 MB / sec. read, 153 MB / sec. write. These values are chosen very optimistic and depend as always on the hardware used.
We chose a file which has an approximately size of 27 GB and copied it from the Samsung SSD directly to a folder of the DiskStation. 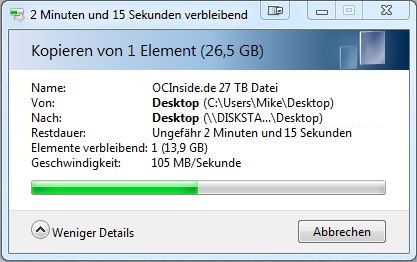 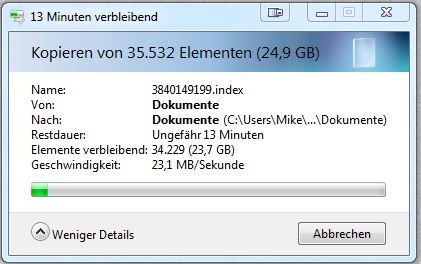 Easy was also setting up the DLNA service in conjunction with a Smart TV. The media were immediately detected in the network and played without any problems. Also available on mobile devices. However, the video file must already be, for example playing with Apple devices, in the right/required format because the Synology DiskStation make no “on-the-fly” conversion of videos. This is only possible with audio files and works also perfectly.

The connection to our NAS via VPN was also very easy to accomplish. In this case, we have chosen the PPTP version and set up this one on our mobile devices. Neither the Samsung Galaxy Note 3 nor the Apple MacBook Pro had problems to connect via VPN to our Synology DS214+. Of course, the connection speed is highly dependent on the internet connection speed. However, in order to download an image or a required document even a mobile data connection (3G, LTE) is completely sufficient. 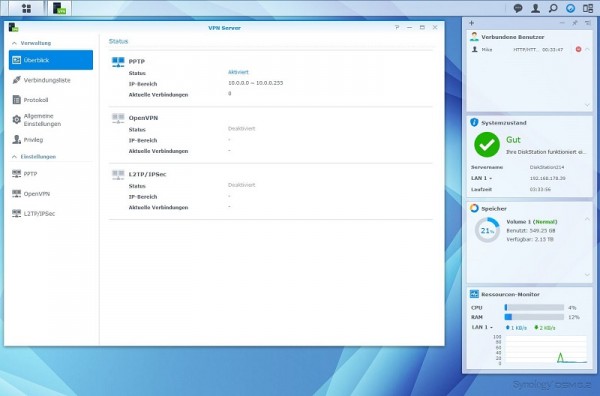 We come to the last point in our practical test, the energy consumption. Synology publishes a a power consumption of 28 watts under load and 10 watts in idle mode for operation.

In our test, the Synology DS214+ NAS has a power consumption of about 27 watts under load. These were reduced in idle mode to 11 watts when the hard drives are shot down.

When switched off, the NAS consumes still 0.3 watts. If we count time with a kilowatt price of 28 cents/kWh, then this would result in costs of about 69 Euro, when you operate the NAS 24 hours a day, 7 days a week under full load. If you shut it down at night, and thus have a 14-hour running time, you can reduce the annual electricity costs to about 40 Euro per year. Assuming the NAS is running in this time under full load.

This small current cost calculator can be used for PC or NAS power consumption and calculate electricity costs: