For silent mode the Thermaltake fan was fixed to 800rpm, for maximum cooling the fan has been set to 1800rpm. Idle testing was done only running Windows and speedfan. Stress testing was done by using small-FFT test of Prime95. Energy saving features have not been deactivated in BIOS/UEFI for testing. 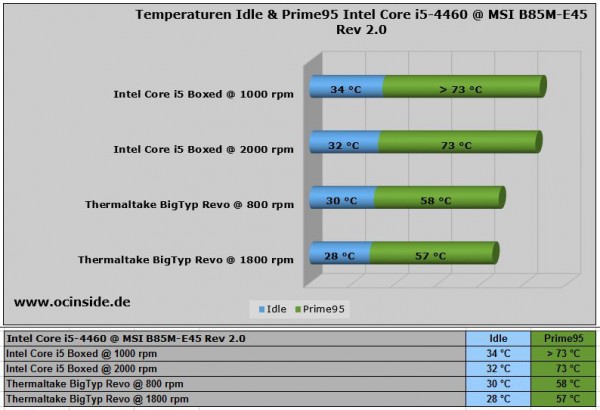 After testing the BigTyp Revo we find it hard to speak of a “silent-mode”. The supplied fan is very audible at its minimum speed of 800rpm. To get a silent cooling solution the fan has to be either controlled by an external fan-controller or simply be replaced with a more silent model.

Under maximum load our Intel Core i5 processor is cooled down to pleasant 58°C, but we are concerned that an increase of speed to 1800rpm at a high noise level leads to no significant drop in temperature.