The SSD drive speed was examined and compared with the following benchmark software:

In IDE mode however in spite of correct SSD alignment the S511 reached like the Crucial C400 only a much slower performance. Additionally the TRIM procedure of the SandForce 2281 controller is not as easy comprehensible as with previous SSDs. The administration of the Dirty Cells is controlled in the background by the sandforce controller chip. With other SSDs one can do a direct TRIM by filling and erasing the SSD data, but with A-DATA S511 SSD there was no recognizable TRIM after filling and erasing the cells procedure for cleaning the so-called “dirty cells”.

Also in IDE mode the SSD exceeded with approximately 336 MB/s the maximum transfer rate of the Serial ATA 2.0 interface, so that a SATA3 interface is really the best choice for this SSD. The write performance in IDE mode was approximately 160 MB/s, which is slower than the SSDs previously tested. The overall score reached also in IDE mode very good 311 points, because for example the OCZ Agility 120GB SATA2 SSD reached only 138 points, the 256GB m4 SSD reached 291 points and a 256GB C300 SSD reached 290 points.

Here is a Snipping screenshot of the AS SSD benchmark results (SATA3 IDE): 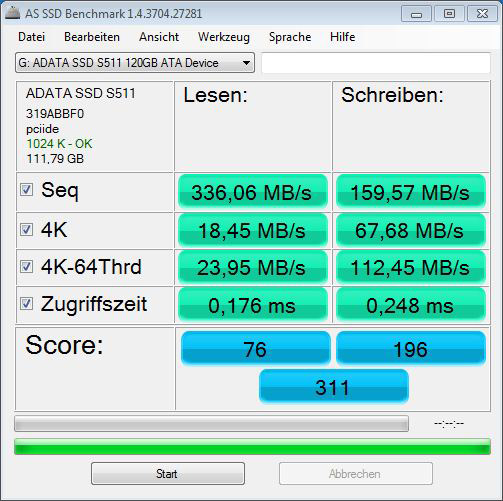 In AHCI mode also another result beneath the read performance was much higher than in the IDE mode and that is the important value “4K-64Thrd”. 4K means that small 4K blocks are read and/or written and with the 4K 64Thrd this is distributed on 64 Threads at the same time. Thus the benchmark program simulate for example a typical program start. Since the weighting of this value is very high in the AS-SSD benchmark tool,the total score in AHCI mode is with 488 points much higher than the previous one in IDE mode. In AHCI mode the ADATA S511 120GB reached to date the highest read performance of 503,56MB/s and a write performace of 158,78 MB/s which is almost identical to the legacy IDE result.

Hint: Who think now about changing its SATA port in the BIOS from native IDE and/or legacy IDE to AHCI, should change first for example (if possible) only one part of the SATA port, where the drive with the operating system is not installed. Because if one like to save the new Windows installation, one must install the hard disk controller driver before changing SATA mode from IDE to AHCI – alternatively there are also Registry entries for it. If you like to upgrade from HDD to SSD, you should not copy the content 1:1 only with a tool like Norton Ghost or Acronis Backup. It is better to install a fresh Windows7 or adjust at least the SSD Alignment. We help you with questions to this topic or all other PC related questions at any time 24/7 in our PC Forum.

Here is a Snipping screenshot of the AS SSD benchmark results (SATA3 AHCI): 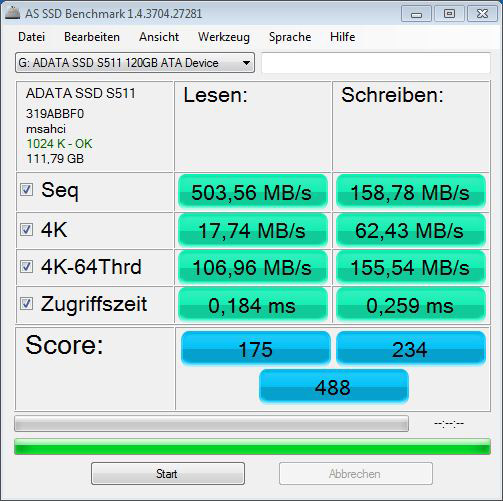 Here is a Snipping screenshot of the AS SSD iops results to measure the input/output speed (SATA3 IDE): 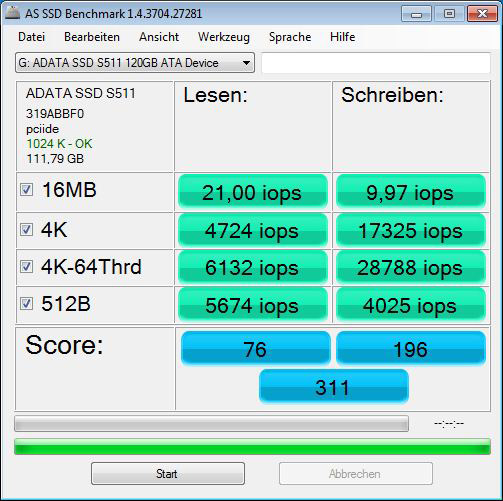 And here is a Snipping screenshot of the AS SSD iops results to measure the input/output speed, with a drastic rise in AHCI (SATA3 in AHCI mode): 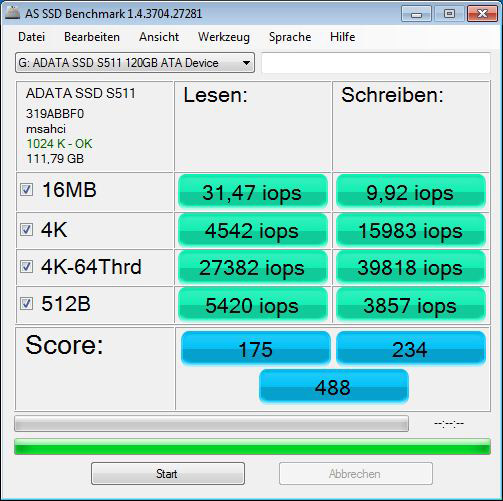 The comparison of the AS SSD benchmark results is extended with each new HDD/SSD test. Here we see several SSDs in comparison to the ADATA S511 120GB 2.5″ SSD in IDE and in AHCI mode, whereby the diagram is updated shortly with new SSDs. Currently, the Crucial m4 256GB SSD is at the to of all result, which offered the highest sequential write performance, directly followed by the ADATA S511 120GB SSD.

Here is a comparison of the AS SSD benchmark values, which are getting updated with soon coming drives: 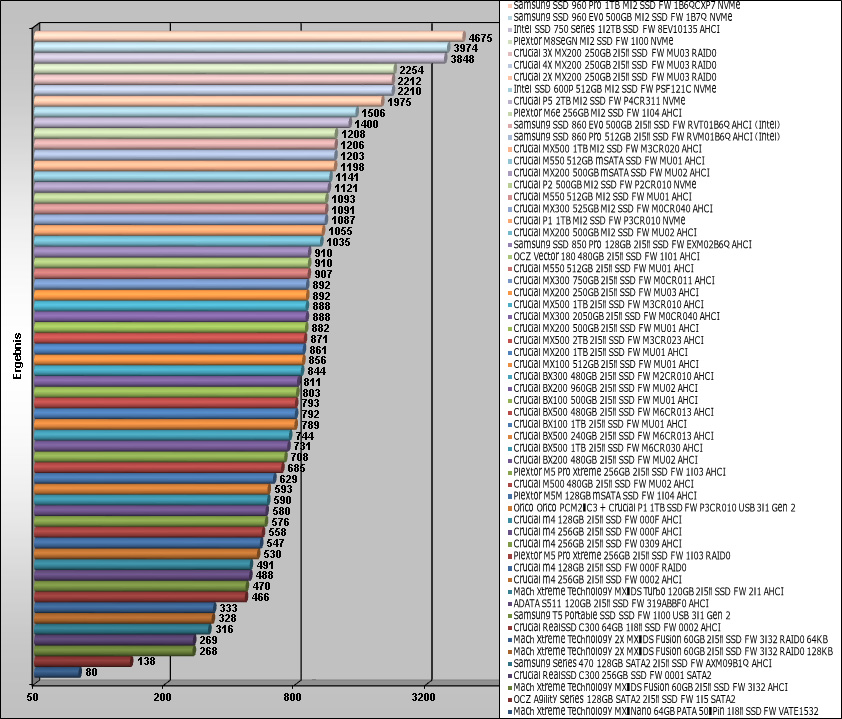 The ATTO disk benchmark values gives a very good overview about the write and read rate on different file sizes. Here we see once again a huge difference between legacy IDE and AHCI, especially with this SSD. The read and write (red) performace is in legacy IDE mode nearly identically, but in AHCI we see a much higher read performance.

Here is a Snipping screenshot of the ATTO Disk benchmark values (SATA3): 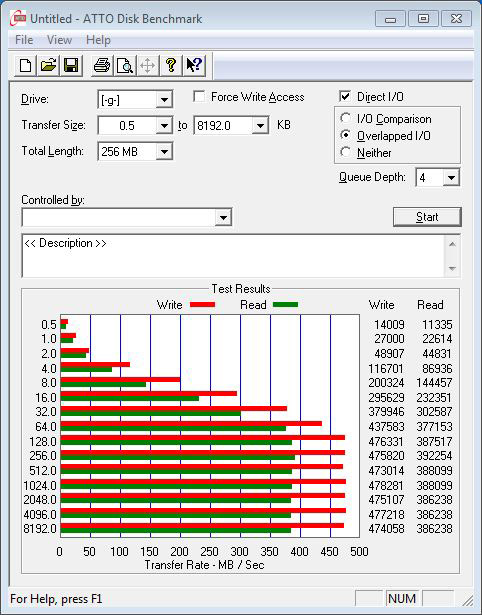 Compared to this result, the read performance in AHCI mode is significantly increased starting with a transfer size of 32k. Here we see can see a very good comparison of the conventional native IDE mode and the modern AHCI mode, which offers beside the higher performance also advantages like e.g. the support of NCQ (Native Command Queuing) or Hot-Plug. This SSD reached in ATTO also the advertised “up to 550 MB/s” read rate and nearly the “up to 510 MB/s” write rate.

Here is a Snipping screenshot of the ATTO Disk benchmark values (on SATA3 AHCI): 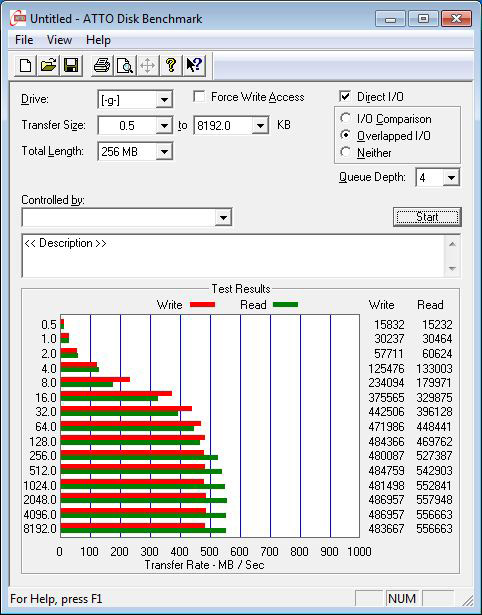 The ATTO disk benchmark values are compared with a small transfer size of 32KB and a large transfer size of 8192KB. The bar chart already shows a first comparison to the Hitachi Deskstar 7K1000.C 1TB hard disk drive, the OCZ Agility 120GB SSD and the ADATA 256GB C300 RealSSD and a few other SSDs, where the best 32K and 8192K result is reached by ADATA’s S511. 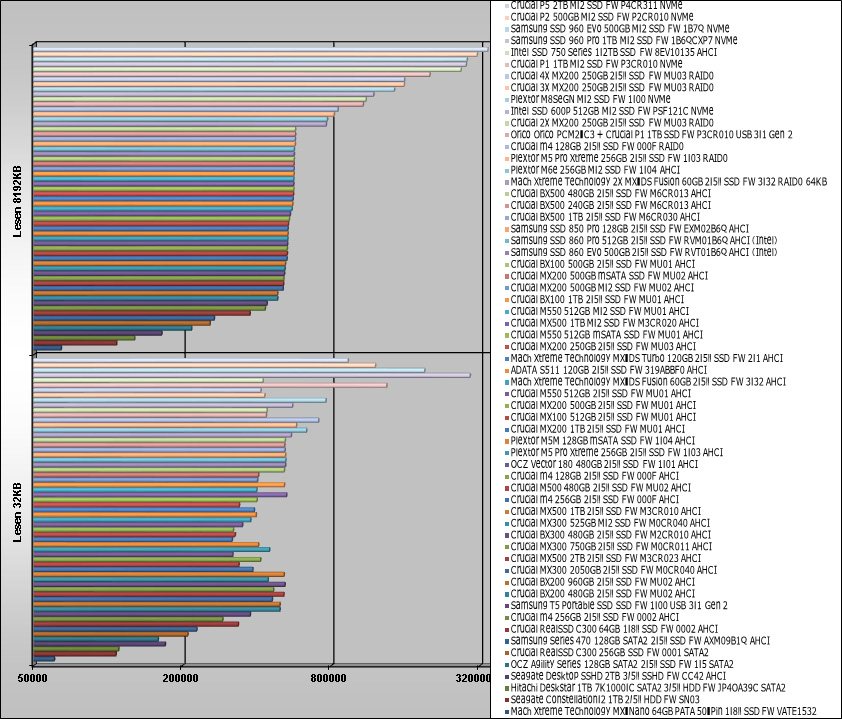 Here is a Snipping screenshot of the CrystalDiskMark values (SATA3): 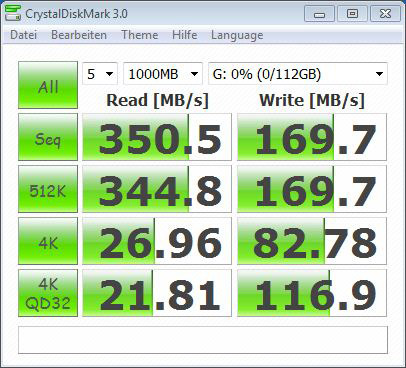 As seen in the previous 4K-64Threads results, the read and write 4K QD32 and the sequential read result is much higher when operating in AHCI mode. 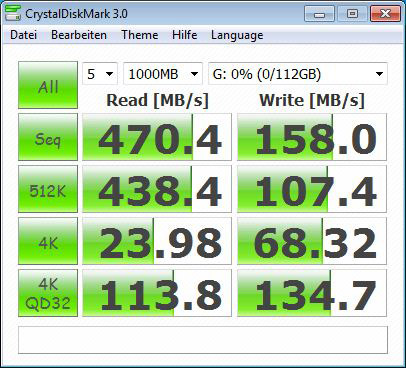 The following diagram shows the CrystalDiskMark results once again compared with other SSDs and platter drives, which are extended step by step. In the CrystalDiskMark comparison one can see significant differences between the to-date tested of the Solid State Drives and Hard Disk Drives, where the tested ADATA S511 120GB SSD has the fastest read performance in AHCI. 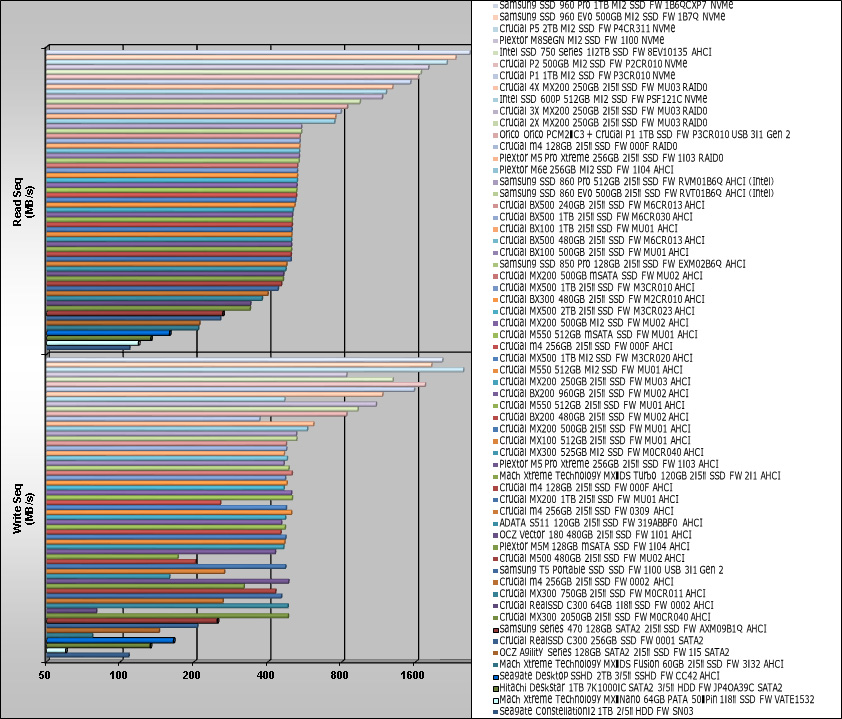 Here is a Snipping screenhot of the HD Tach benchmark values: 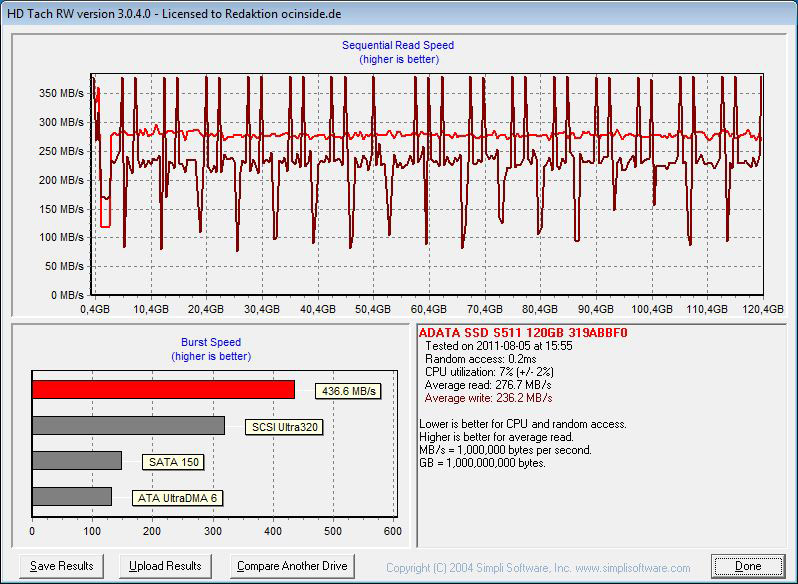 The comparison of the HD Tach benchmark results shows the faster reading speed, writing speed and the lower average access time of the Solid State Drive compared to hard disk drives with their much higher access time. 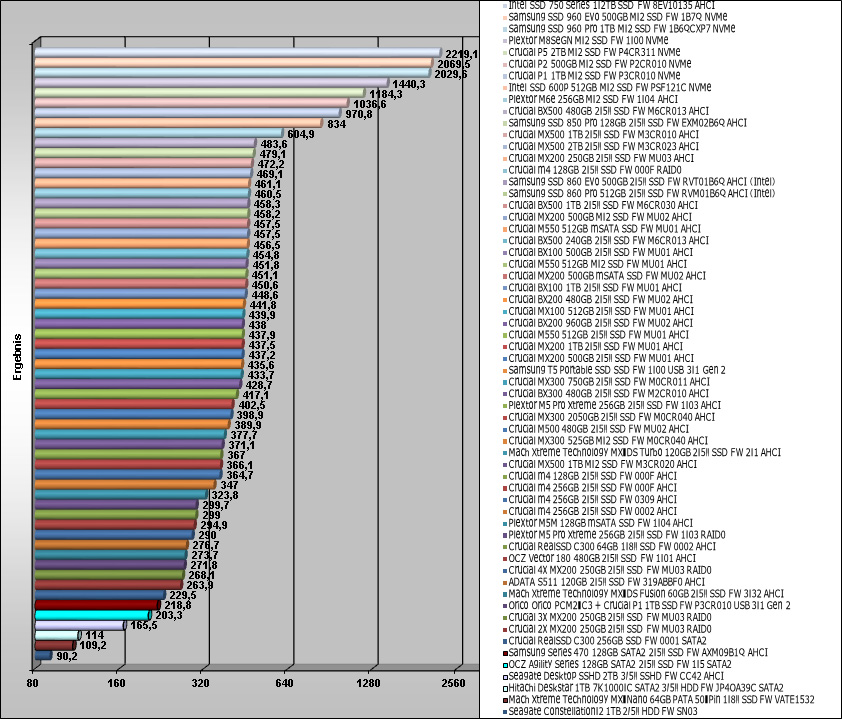 Of course, SiSoftware Sandra benchmark should not be missing in this test series. SiSoftware offers with their SiSoft Sandra program a very comprehensive tool, which contains a lot of tools to get very reliable test results of all hardware components. The average access time of the ADATA S511 120GB SSD was in SiSoftware Sandra with 100us (equal to 0.1ms) low and the drive index was in IDE mode 351,53 MB/s.

Here is a Snipping screenshot of the SiSoftware Sandra benchmark values (SATA3 IDE): 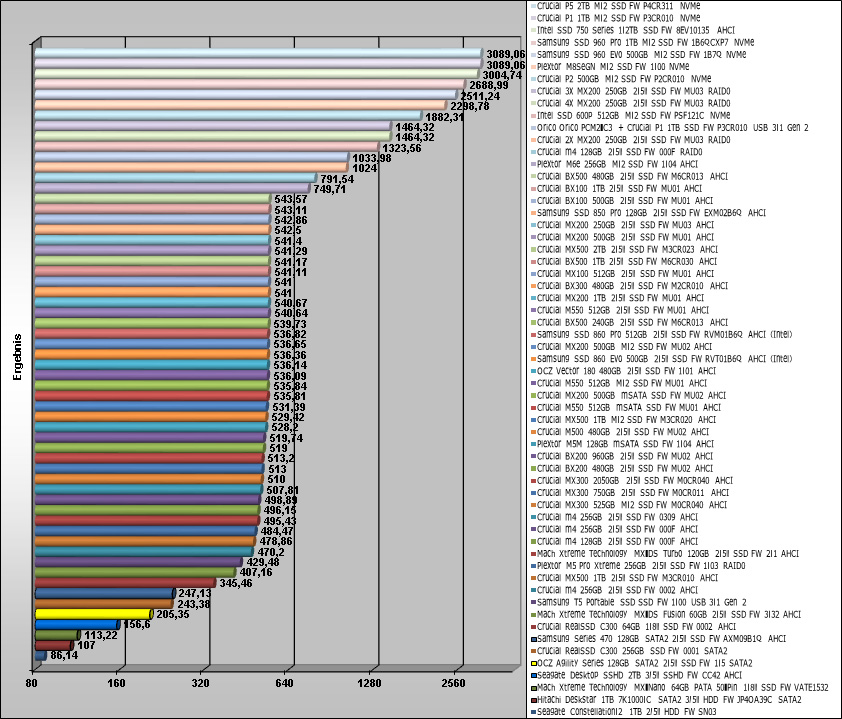