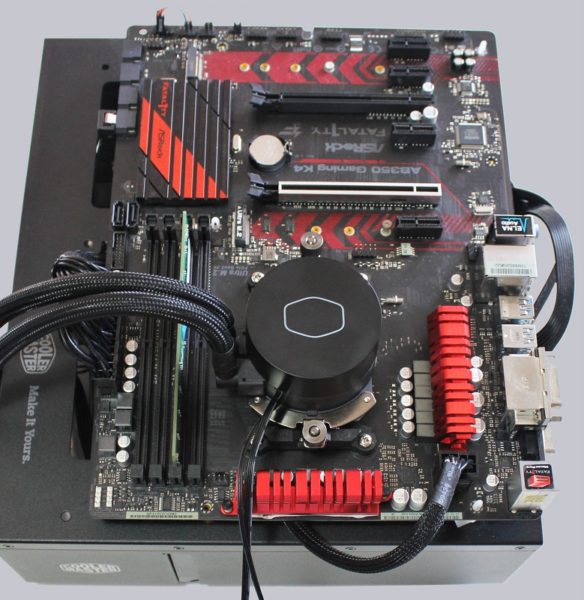 For measurement, the following OC tools were used: Prime95 and SpeedFan.

As always, the Cooler Master MasterLiquid ML120L V2 RGB competes against our reference, the Noctua NH-D15. If you want, you can also take a look at our test of the Arctic Freezer 34 eSports DUO, which was tested under the same conditions and compare the results.

For the small 120mm AIO, the Noctua NH-D15 is of course a size too big, but it can show that it has the AMD Ryzen 7 1800X under control and does not even have to be particularly loud. In the lower speed range they both come very close! 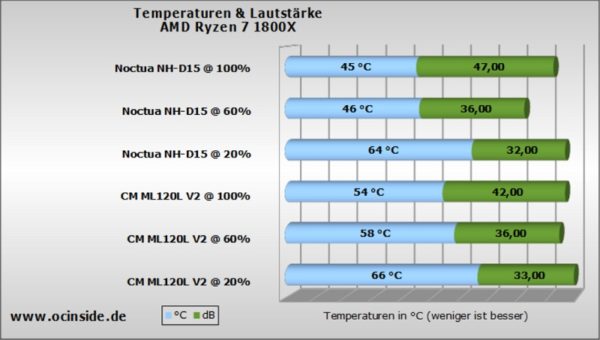 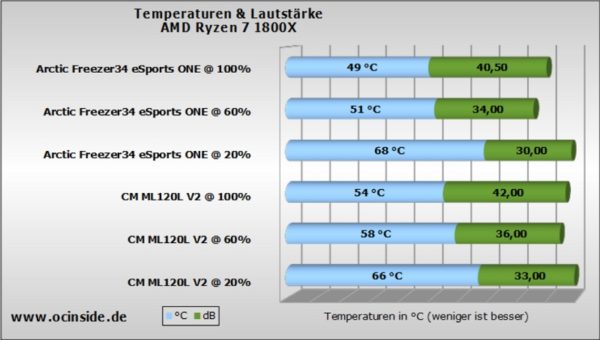 It would normally be the turn of the pump test at this point to find out how well the pump can be controlled so that the AIO’s usual pump whirring can be minimized. However, this part falls victim to the success of Cooler Master, because THE PUMP IS SO QUIET that we were not able, with the means available to us, to make a video and show the difference between 20% and 100%! We can therefore attest to the MasterLiquid ML 120L V2 RGB that the pump installed in a PC is absolutely inaudible 👍

In our view, the fans are very well tuned and can serve every need, whether low noise or maximum power during the next bench session.

Some will surely wonder why a 120mm AIO water cooling should be used instead of a good air cooler such as the Arctic Freezer 34 eSports, because air coolers are cheaper at the same size with similar performance. However, heat pipe tower coolers require a lot of space on the spot, i.e. above the CPU socket. If this is not available, for example with a Micro-ATX or even ITX case, the only option left are compact coolers such as boxed coolers or top-blow models and this is where a small 120mm AIO water cooling system can score.
At the time, when testing the Cooler Master MasterCase H100 Mini ITX case the problem was that even the large AMD Wraith Prism cooler would have been too high. With AIO water cooling like the Cooler Master MasterLiquid ML120L V2 RGB from this review, this is not a problem and you get cooling capacity even with small space, which even leaves a little OC scope 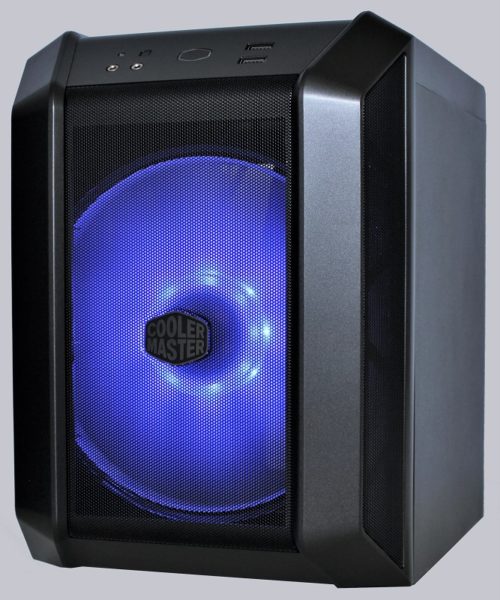 Now we come to the optical criteria of AIO water cooling.

The Cooler Master MasterLiquid ML120L V2 RGB knows how to please despite a rather simple cable controller with a lot of interesting effects. We like it particularly good that the button for regulating the effect speed also produced a small mirage effect, which was so great in previous tests and which hardly any other manufacturer has picked up. As always, we have a video of this on our OCinside YouTube Channel.