Since we unfortunately only received one fan at a time, the actual test turns out to be a bit shorter this time than initially planned. 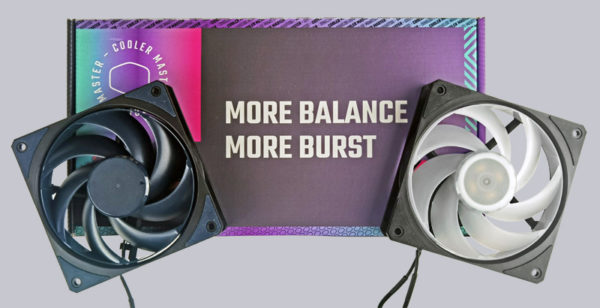 We usually also test fans on 240 AIO water coolers to enable a measurable comparison with other manufacturers. Unfortunately, we cannot provide this comparison this time, but we would still like to give a subjective impression.

The fans build up an enormous amount of pressure at full speed. We placed a few fans from other manufacturers next to the fan for a subjective measurement and felt the deflection of the strips and the pressure with paper strips. It actually turned out that the pressure felt was different from the other fans, and the paper strips also had a much stronger deflection.

Of course, we could really test the fan’s noise. The Mobius 120 with 2050 rpm achieved a noise level of 21.6 dBA, which is even below the 22.6 dBA of the manufacturer’s specification.

The lowest speeds are at 110 rpm – yes, it really manages that with a little trick! The fan gets a short kick to about 800 rpm and then settles at about 110 rpm. The fan is only audible in such a speed range if you hold your ear directly to the fan!

For silent freaks, these fans are probably great! But even the 21.6 dBA can hardly be heard in a closed case, especially not with some distance, because 20 dBA correspond to the ticking of a clock, the rustling of leaves or a buzzing mosquito. Whispering or breathing noises are around 30 dBA.

The P stands for performance in the Mobius 120P RGB. We determined a volume of just 29.4 dBA here. This is also a tick below the manufacturer’s specification. For 2400 rpm, this is really an excellent value and even that was not really annoying in practical testing.

The Mobius 120P also starts at a very low 150 rpm, again with the trick of briefly increasing it to about 900 rpm. Since the fan is a bit heavier, it needs a bit more momentum. At 150 rpm, the fan noise is no longer measurable for us, as it is for the Mobius 120, since the ambient noise is already higher and the fan is completely drowned out.