All voltages could be tested on different loads also with external measurements very well and pointed to a good technical conversion of the switched power supply. The combined total output values should not exceed the following ratings: At +3.3V and +5.0V up to 150 Watt, +12V1, +12V2, +12V3 and +12V4 up to 684 Watt and total consumption of all power lines should not exceed 700 Watt (continuous operation according to manufacturer with maximum load on up to 50°C).

These are manufacturer values, which one should not exceed, to avoid overloading and too high heat development. Apropos overloading – of course the PSU offers also any kinds of short-circuit-, overcurrent-, output- and input power protection, (OCP, SCP, OVP, UVP, OPP, OTP) which was tested successfully in the test attempt. Nevertheless one should avoid any installation failures, because under certain conditions it is possible to destroy the PSU, or other parts of the PC (up to a fire by e.g. cable fire with loose or wrong connections).

Furthermore, the power supply has an active PFC (Power Factor Correction) for the reduction of the reactive power, the EMV noise and improvement of the efficiency. Meanwhile at least the more inexpensive less efficient and bigger passive PFC (upstream throttle) is legally prescribed. So also here the company Cougar saved by no means and offers a power pack with 80PLUS silver certification, which has of course .90 PFC at 50%.

Own measurements of the test system with ASRock 890GX Extreme3 motherboard, AMD Phenom II 710 X3 CPU, 4GB DDR3-1333 memory, hard disk and ATI Radeon HD4870 PCI-E 2.0 video card resulted in an idle value of 137 Watt and a maximum value with full system load of 229 Watt. Switched off in the S5 mode, the test system needed max. 6 Watt with the SX-700 power supply. Above all the idle value of 137W with small load is thereby clearly below the value of other tested power supplies in comparable performance classes, which will published here.

Additionally, the power supply is according to the manufacturer NVIDIA SLI certified, ATI CrossFire certified and ErP conform with a Standby power consumption below 0.3 Watts (switched off).

The MTBF (Mean Time Between Failures) of the power supply is according to the manufacturer with 40°C about 100,000 hours, which distinguishes finally the reliability of the power supply, this time between 2 possible errors is enormously good.

For the high durability contributes also the 140mm fan beside the high-quality Japanese 105 °C capacitors and the solid caps at all output lines. The 140mm fan is provided with Hydro-Dynamic – HDB, reached thanks to temperature control an optimal adjustment of the volume for necessary cooling and is very quiet with medium load. 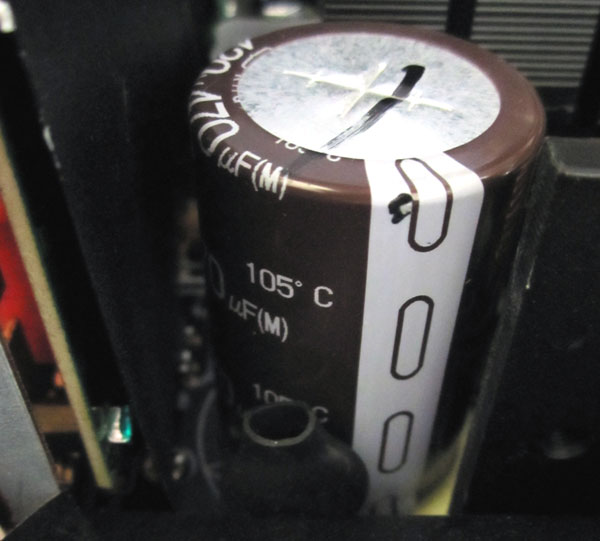