Get fast to the right UEFI settings …

Let us continue with the BIOS / UEFI Setup options and the UEFI overclocking. By pressing F2 or Del during PC boot, you get access to the UEFI Setup.

The ASRock Fatal1ty AB350 Gaming K4 UEFI has a graphical interface that allows intuitive operation with the mouse, or can be operated still as usual with a keyboard.

The usual ASRock EZ Mode – Easy Mode is currently (yet?) not available on AM4 motherboards, but the well-known graphical interface is usually the best choice for OC enthusiasts. The entry page offers basic information such as the UEFI version, the CPU used, the installed DDR4 memory with dual channel support, a language selection, time and date. 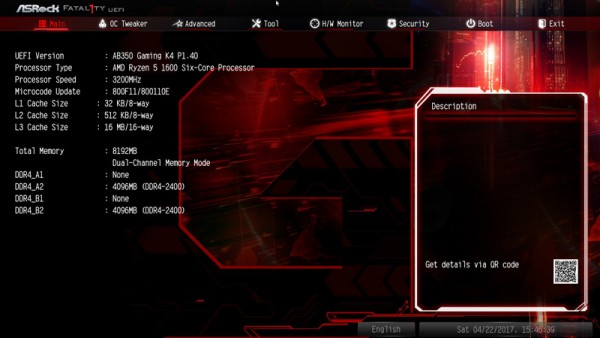 Also the System Browser view, ASRock Tech Service and the My Favorite menu isn’t available, but it has a selection to view the UEFI in Full HD and also offers the Active Page on Entry selection, where you can decide which UEFI page you want to see when you enter the UEFI Setup. This is very helpful mainly for overclocking, since one have to enter the OC Tweaker menu very often to find the best OC settings. Or you just add all necessary points to the My Favorite overview and start directly to the My Favorite overview page. At the ASRock Fatal1ty AB350 Gaming K4 you find the Active Page on Entry option and the Full HD UEFI selection in Advanced. 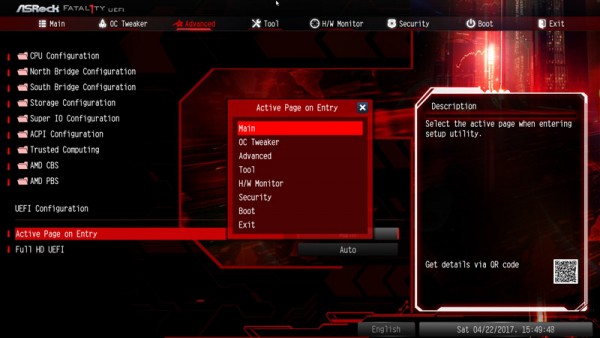 This time we’ve selected the ASRock Instant Flash option and check the ASRock support page, which UEFI is available. The board was supplied with the BIOS P1.40. At testing date, the UEFI BIOS version P2.20 was available as latest download, which we have installed of course.

Just confirm the UEFI Update and the new UEFI will be installed immediately. 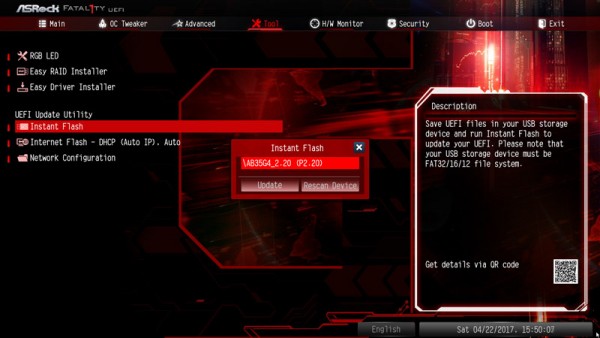 The new UEFI version is available after a restart … 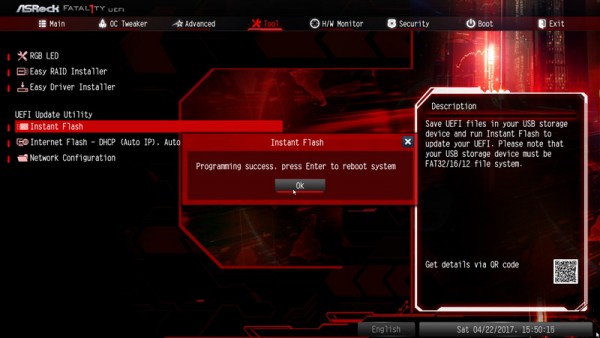 … and can be checked directly on the entry page as you can see here with the AMD Ryzen 5 1600 CPU. 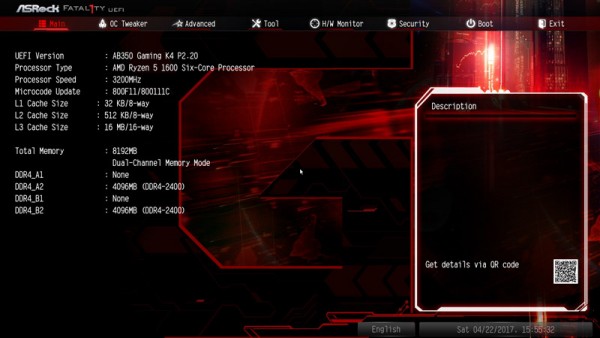 Additionally, we have tested the B350 motherboard with an AMD Ryzen 7 1800X CPU to see the results of this inexpensive ASRock AB350 Gaming K4 with the at this time fastest AMD processor. 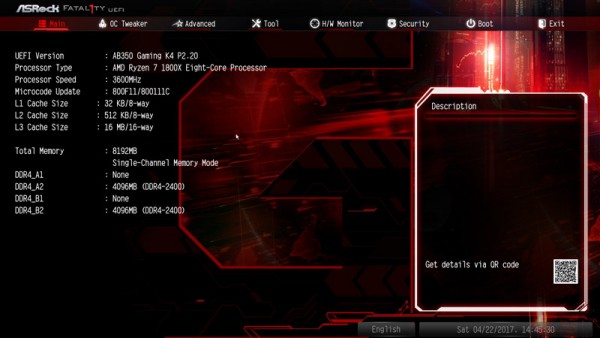 On the Tools page, a new point is located and this is called ASRock RGB LED. 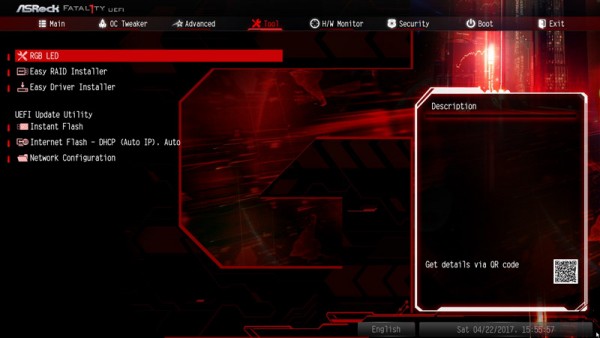 In the ASRock RGB LED menu of the Z270 series it is possible to do all RGB LED settings already in the UEFI. This ASRock B350 offers only a selection to activate or deactivate the lighting. All other settings have to be done over the provided ASRock RGB LED Software. 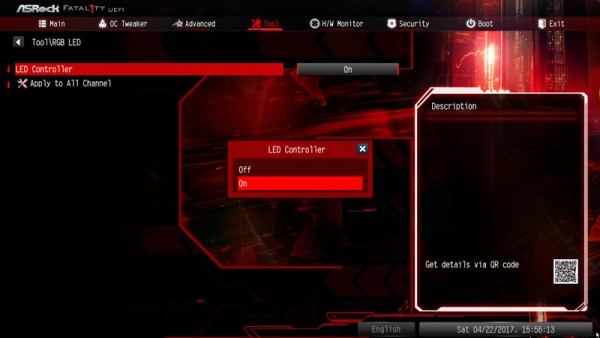 Anyone who has dealt with the AMD Ryzen issue will certainly have heard about some problems with the first-time AMD driver installation. But ASRock makes it very easy for the user to download the latest drivers with the easy driver installer. 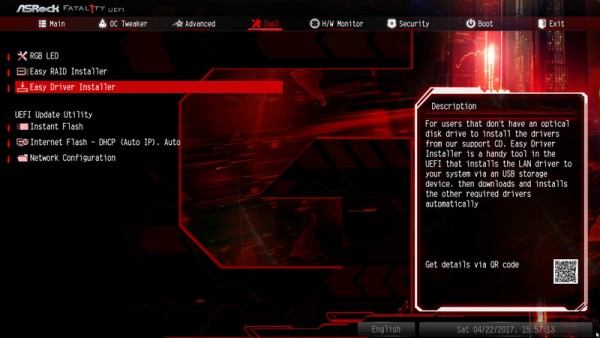 Now let’s get to AMD Ryzen overclocking with the B350 chipset on the ASRock AB350 Gaming K4 motherboard. ASRock split the OC-Tweaker settings for this ASRock Fatal1ty AB350 Gaming K4 in CPU Configuration, DRAM Configuration and Voltage Configuration. Since there are relatively few OC settings, these are summarized on a single page to remain easy to manage. 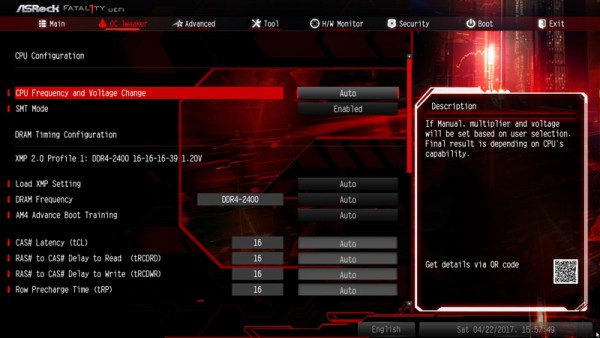 Below CPU configuration, the manual selection contains two important OC options for AMD AM4 CPU overclocking: The CPU frequency and the CPU voltage. 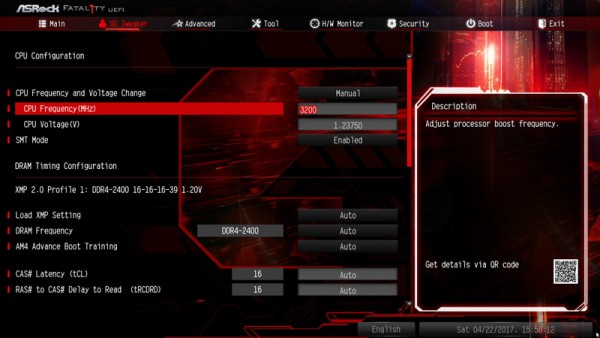 AMD Ryzen 5 and AMD Ryzen 7 processors have an unlocked multiplier so that you easily can increase frequency desired CPU. With the AMD Ryzen 5 1600 CPU (standard clock 3200 MHz at a CPU ratio of 32 x) the Fatal1ty AB350 gaming K4 motherboard ASRock has offered a range of 1600 MHz up to 6300 MHz.

How easy that is, we have simply tried with the AMD Ryzen 5 1600 CPU and are with greatly increased VCore-as in the AMD OC Forum at AMD Ryzen 5 1600 OC reported – from 3200 MHz can be overclocked to dreamlike 4091.71 MHz. Not prime stable, but you can still see very nice, which OC results you can expect especially with the cheaper CPUs. 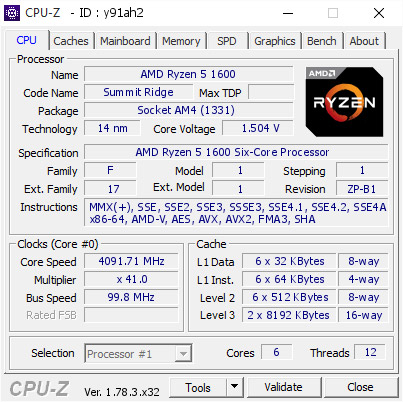 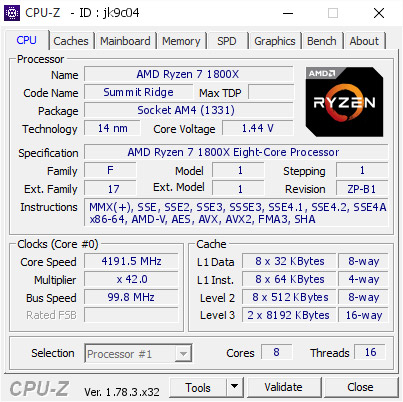 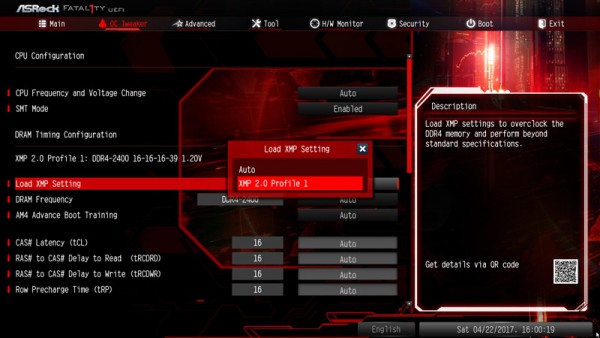 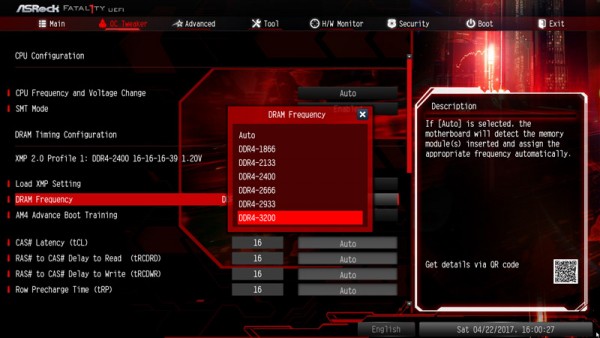 Optionally you can manually adjust all DDR4 timings: 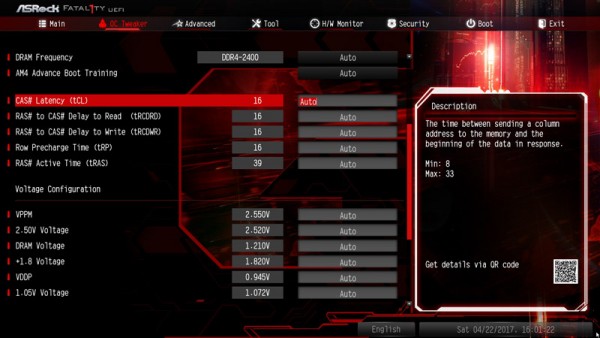 Now we come to the voltage settings that can be adjusted in the UEFI. 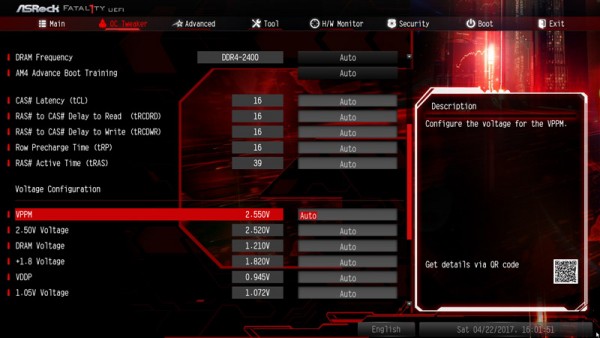 The DDR4 voltage can be increased between 1.200 and 1.800 Volt for good overclocking or undervolting of the DDR4 memory.

Who rather would like to overclock in Windows, can make many of the above voltage and frequency settings even with the ASRock A-Tuning tool or as seen in the coming AMD Ryzen OC Guide, overclock with the AMD Ryzen Master UI Tool. 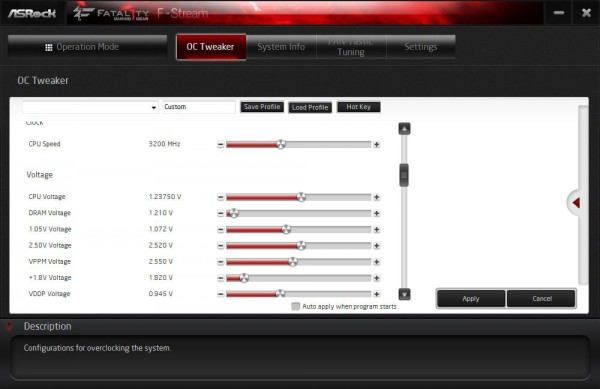 Once the desired settings are found, you can save up to five different OC Tweaker BIOS settings with names in the UEFI. 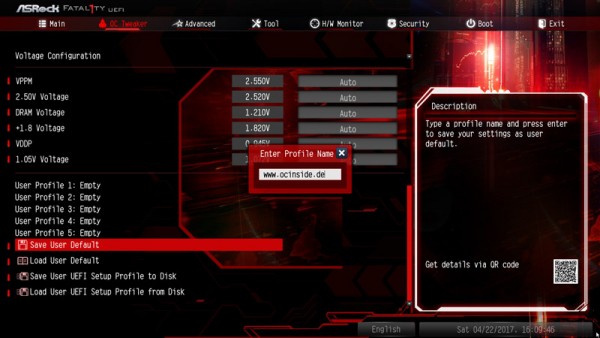 For example, you can save balanced BIOS settings, overclocking settings and undervolting settings or Office and Gaming settings in an user profile of the UEFI to load them very quickly at any time. 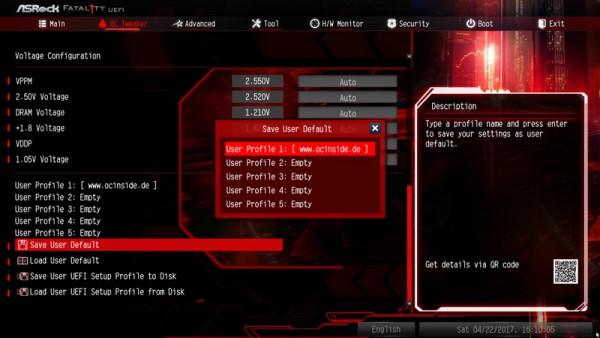 Interesting is the new Save User UEFI Setup Profile to Disk option. Just click it to save your own UEFI settings on the hard drive or an USB stick. 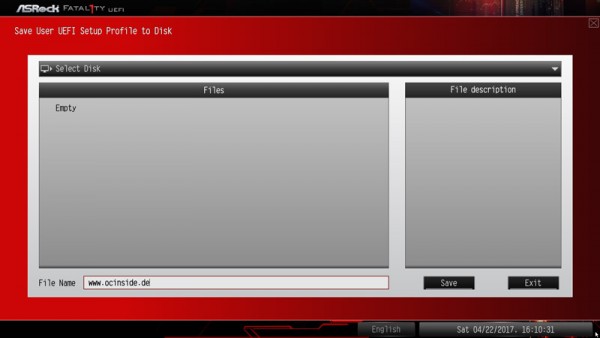 Very hidden is also a P-states setting in UEFI, which is very interesting to AMD Ryzen optimization. 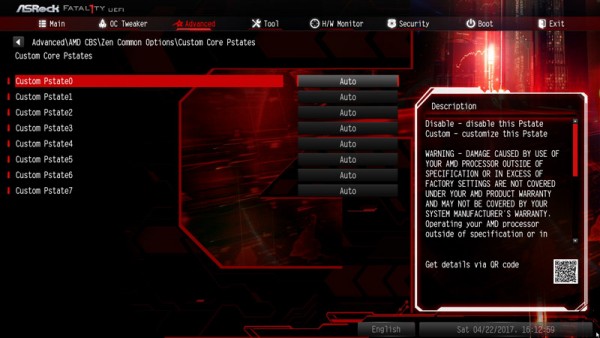 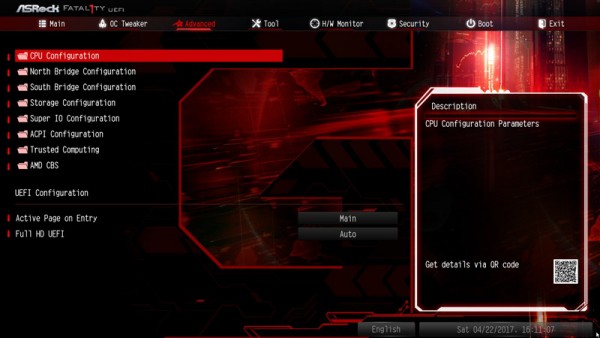 New are the AMD Ryzen settings under AMD CBS, where you can set the previously mentioned Custom Core PStates under Zen common options. 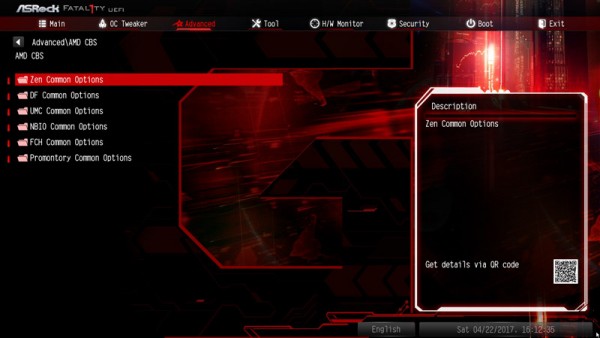 Under Advanced -> AMD CBS -> promontory Common Options -> PT USB configuration options you will also find the USB ports. If you had found this before publishing this detailed test as newcomer, you should have received a OCinside sticker 🙂 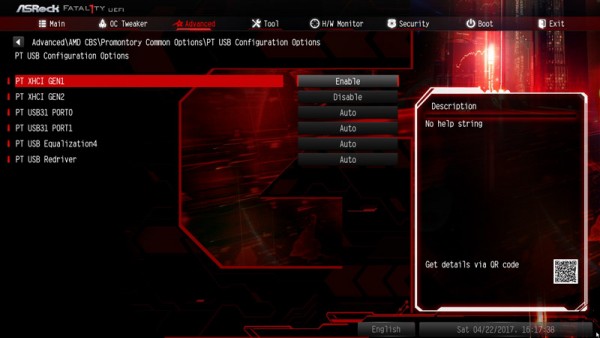 Here we like to have a better overview in order to make all the important settings as usual – whether they are physically in the Northbride, Southbridge or in any other chip on the motherboard, as this distribution is not interesting for most users.

As we know ASRock, however, we think it will soon give a BIOS update, which makes such basic settings much easier to find and set … and if it is realized via an additional search function in the UEFI, which we would like to propose officially! 😉

The UEFI Setup of the passive cooled AB350 Gaming K4 motherboard offers extensive temperature fan control options. The settings for the fan controller can be found in H/W Monitor directly below the temperature and voltage display. 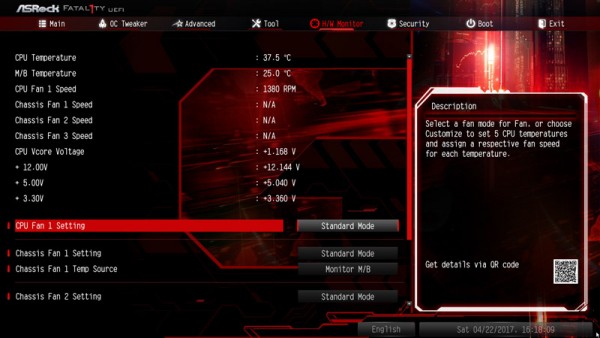 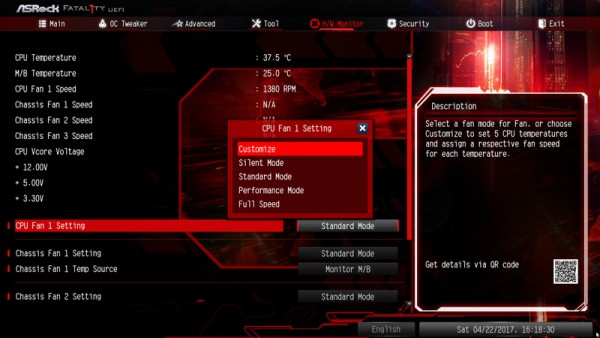 In the Customize mode, several temperature steps are available to which you can assign a specific fan. 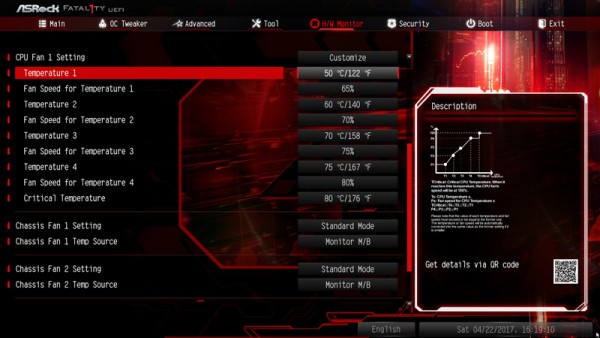 For the chassis fan connectors you can even select, which source you want to use for temperature measurement – Monitor CPU or Monitor Motherboard. 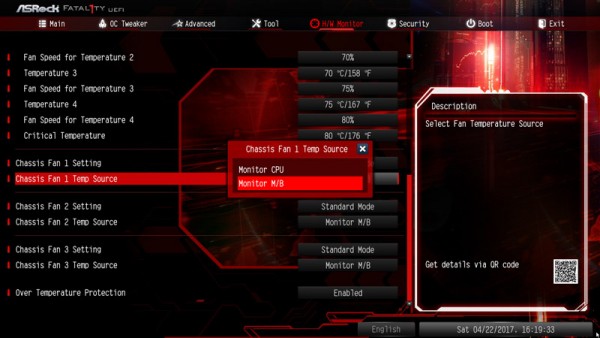 However, the “FAN-Tastic Tuning” menu item is not integrated with this B350 motherboard. This is currently available in the AB350 Gaming K4 only in the ASRock F-Stream tool. 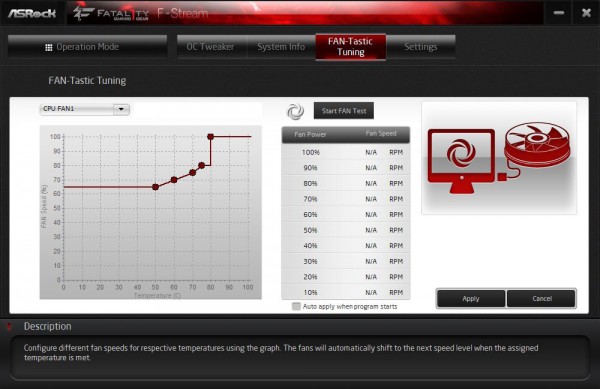 You can usually get along without an expensive Fan Controller, because the fans are controlled with this fan control based on CPU or motherboard temperature.