The ASRock Fatal1ty AB350 Gaming K4 AMD AM4 DDR4 motherboard is a first-class motherboard for the inexpensive switch to an AMD Ryzen PC, offering a good basic equipment, some bling-bling and despite AMD B350 chipset even very good OC results.

A few features such as the optical S/PDIF output or five audio jacks you have to dispense with this motherboard, also, the B350 motherboard lacks a setting for the bus clock or even an external clock generator such as the Hyper BCLK Engine II of the X370 Taichi motherboard, yet we achieved in our tests excellent overclocking results and stable performance even with an AMD Ryzen 7 1800X.

All in all, the ASRock Fatal1ty AB350 Gaming K4 Mainboard offers an inexpensive entry for building an AMD Ryzen PC system and in spite of the B350 chipset you can expect well overclocking, even if it’s not on the same equipment level of the high-end motherboards from the company ASRock.

With these good results at such a low price, the ASRock Fatal1ty AB350 Gaming K4 motherboard receives our OCinside.de price tip award 04/2017! 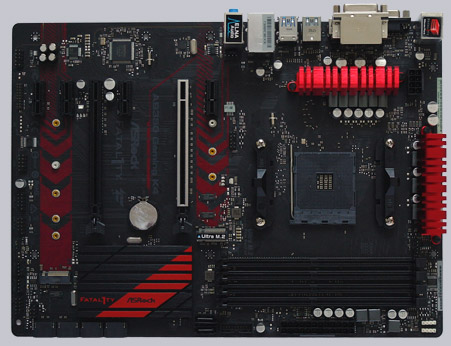