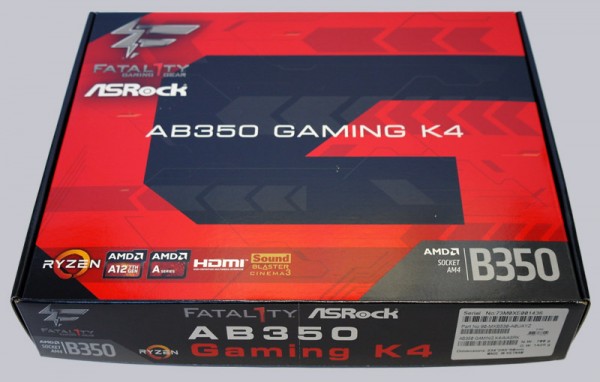 The back of the package shows some features like PCIe Steel Slot, ASRock RGB LED, Dual M.2, USB Type-C and much more. 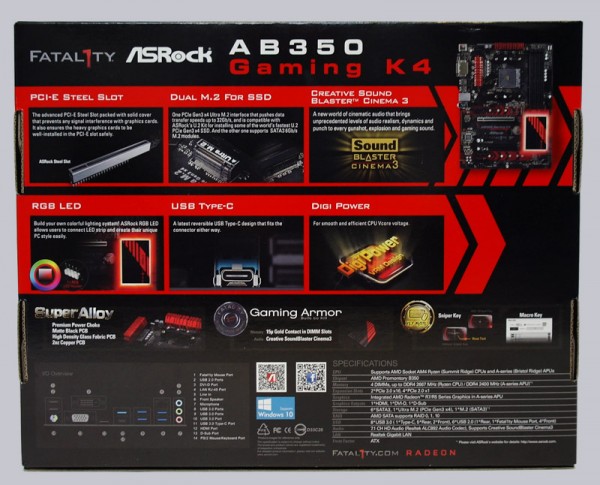 After opening the box, we take a first look at the contents. 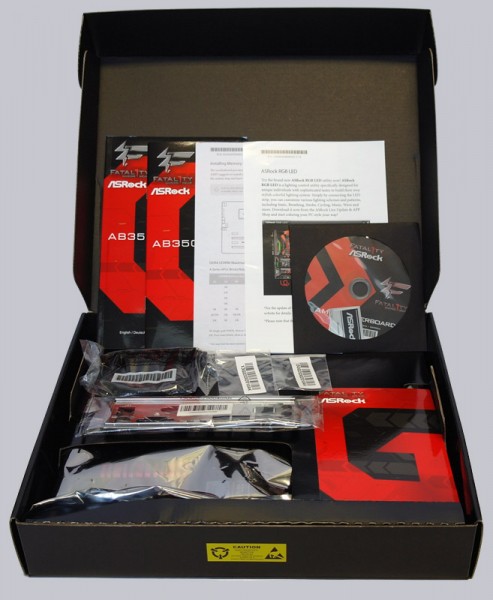 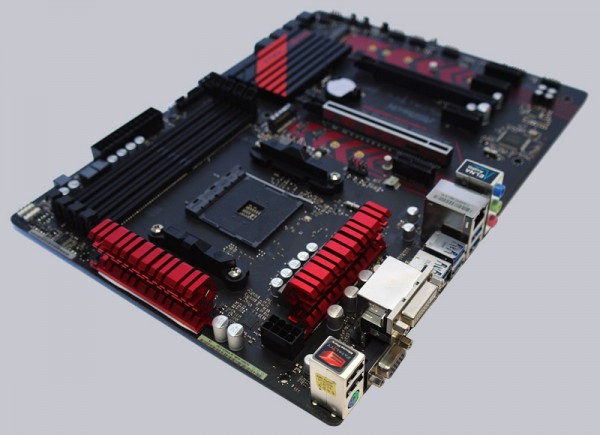 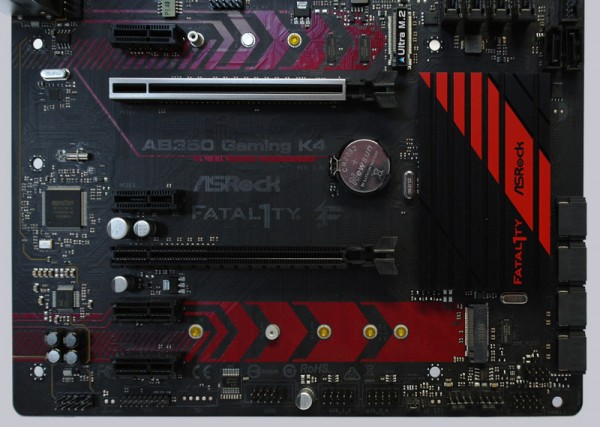 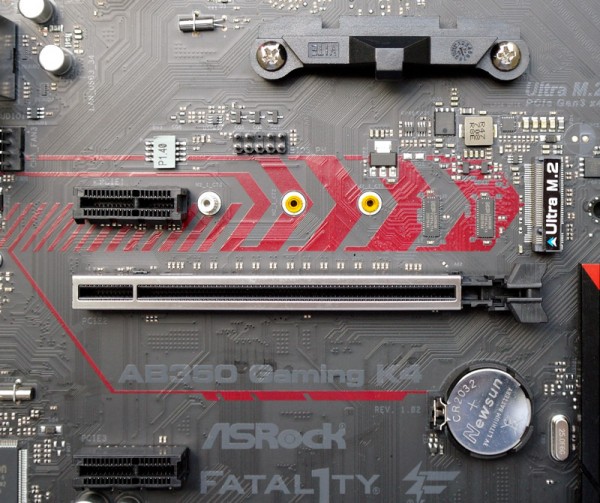 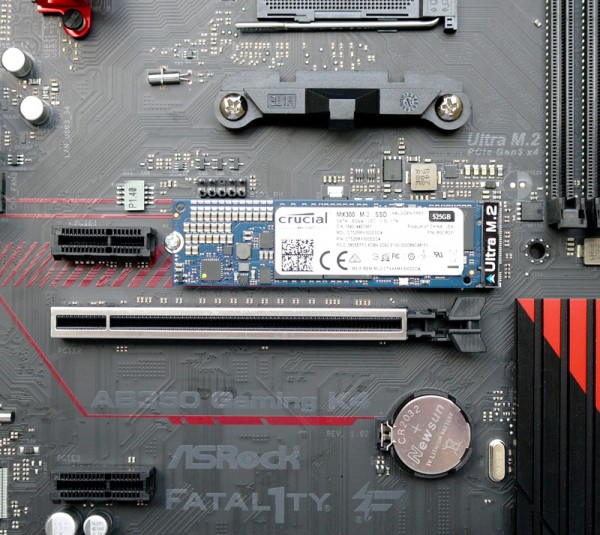 These white 4-pin 12V RGB headers are new as well. Here, you can connect conventional RGB stripes in order to lighting the chassis. 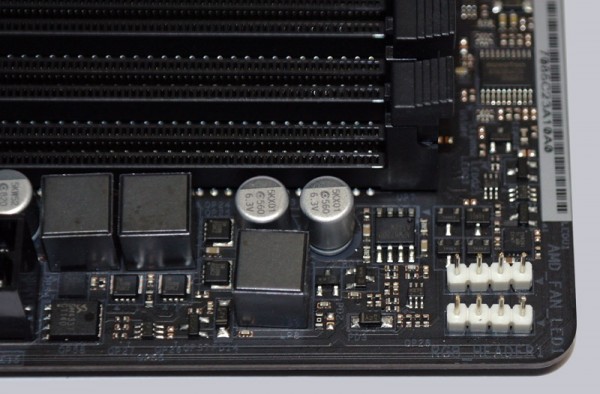 ASRock has also RGB LEDs integrated under the chipset heatsink, which can be controlled as desired. The following image shows a few freely-selected colors on the previously tested ASRock Z270 Killer SLI motherboard:

The RGB LED header and the integrated RGB LEDs are controlled by the supplied ASRock RGB LED software. Currently there’s no RGB setting in the UEFI like known from Z270 Killer SLI except deactivation. The ASRock RGB LED menu offers a lot of variations like e.g. different colors. 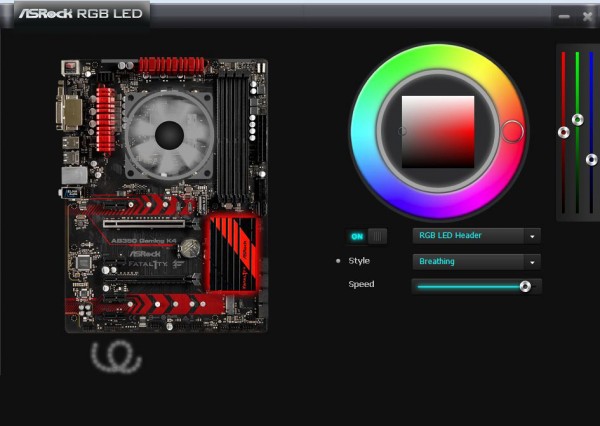 You can select, if you like to control the RGB header separately or together with the RGB lighting under the chipset cooler. 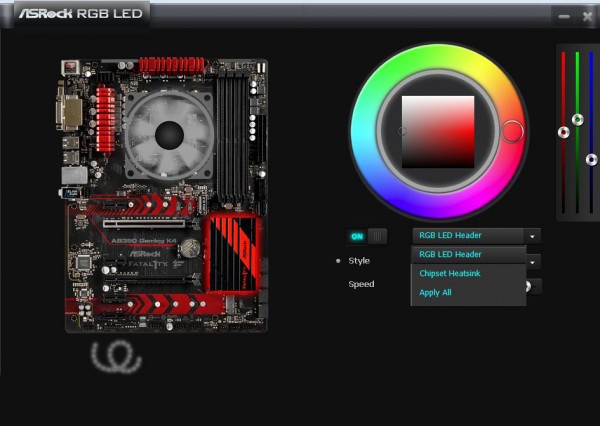 And you can adjust in the ASRock RGB LED menu, if the LEDs should light continuously, breathe, random or even light up to the music. The user has numerous ways how and how fast light up the LED stripes or the chipset cooler LEDs and can of course also completely disable it. Certainly as already mentioned in the previous ASRock Z270 Killer review, it’s no “must have” feature, but definitely “nice to have”! 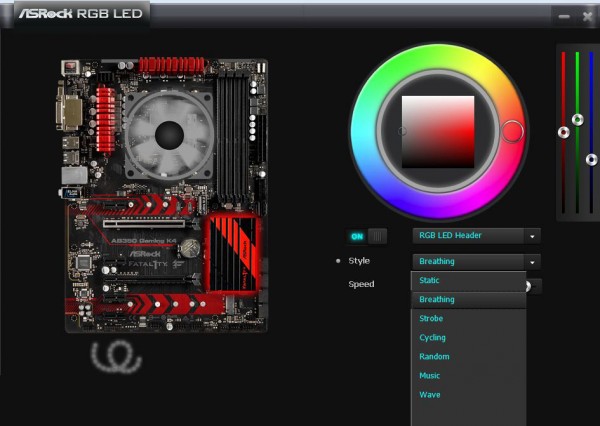 Here you can see the internal USB3.0 header and the 24-pin ATX power connector as well as a few of the solid caps capacitors and the RGB LED connectors. 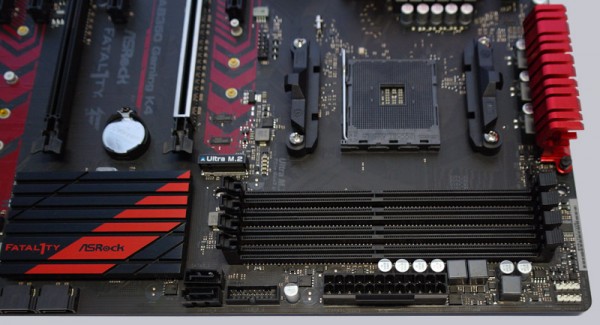 Here you can see a motherboard side view with the relatively small heat sinks made of aluminium alloy, which are carefully installed on the MOSFETs and VRs.

The AMD B350 chipset supports altogether up to 6x PCIe lanes. This board offers two PCI Express 3.0 x16 slots for AMD CrossFireX or nVidia SLI, whereby either one graphics card with x16 bandwidth and another graphics cards with x4 lanes bandwidth can be installed. In addition to the PCI Express 3.0 slots, there are four PCIe 3.0 x1 slots.

The ASRock Fatal1ty AB350 Gaming K4 can be equipped with up to four DDR4 modules and is expandable depending upon operating system used (see list) up to maximally 64 GB memory.

Here you can see a picture of the four DDR4 memory slots with dual channel support, you should install them first in the slots DDR4_A2 and B2:

The Intel AMD AM4 motherboard supports DDR4 memory modules and can be optimized in the BIOS for DDR4-2667 Dual Channel modules with AMD Ryzen processor. UEFI offers the selection for DDR4-1866 up to DDR4-3200.

Thanks to XMP support (Extreme Memory Profiles), XMP memory modules are set correctly with one mouse click in the UEFI and of course there are far more memory adjustments and more OC-options, but more on that later. Before buying the RAM, you should check the officially supported RAM modules at the ASRock memory support page, this is not only for AMD Ryzen systems very important.

Here you can see the SATA3 ports, whereby depending on the M.2 modules used, the SATA_3_3 is disabled:

The SATA 3 ports are supporting RAID 0, RAID 1, RAID 10, NCQ, AHCI and the Hot Plug function in AHCI mode (AHCI stands for Advanced Host Controller Interface and should be selected for SSDs). Thanks to the UEFI BIOS also drives with more than 2 TB for the installation of Windows 10, Windows 8.1 or Windows 7 x64 can be installed. Installing the drivers was absolutely no problem with Windows 10, so the Windows 10 installation was done very quickly. But also for Windows 7 AMD offers their All-in-One driver packet.

At review date we got a fresh AMD chipset driver 17.10 (amd-chipset-drivers-software-17.10rcp22-apr17) with optimized Ryzen Power Plan.

Drivers for Windows 10, Windows 8 and Windows 7 32-Bit and 64-Bit can be installed over the Easy Driver Installer or Easy RAID Installer button in the UEFI, are provided on the DVD, and can be downloaded at the ASRock support page. Windows 10 is currently the preferred operating system. 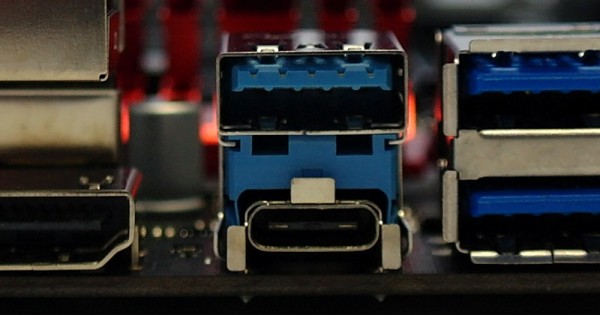 The ASRock Fatal1ty AB350 Gaming K4 motherboard is equipped with the ALC892 audio codec with content protection, premium Blu-Ray audio support and Creative SoundBlaster Cinema3, which supports 7.1 surround sound at the internal front panel audio connector and has analog output over 3x 3.5mm connectors on the ATX panel. But there is no optical SPDIF connector available. 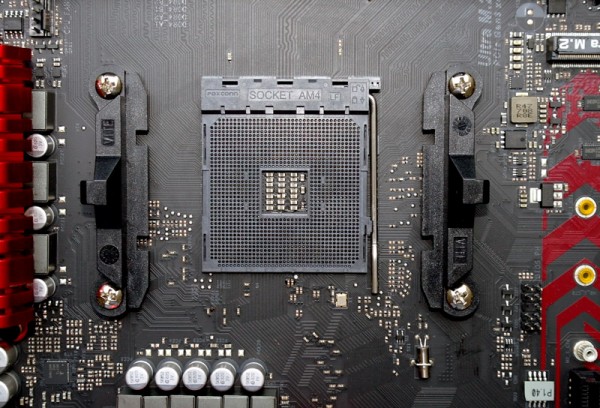 First, we have installed the new AMD Ryzen 5 1600 Summit Ridge, then we have tested the motherboard with an AMD Ryzen 7 1800X CPU and hopefully also soon with an A Series Bristol Ridge processor with integrated GPU. 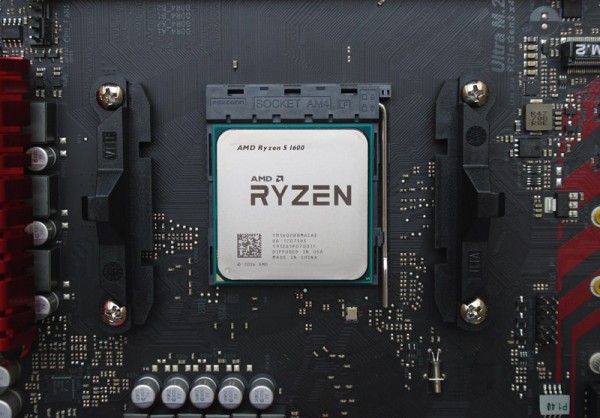 This is how two of four possible memory modules have to be installed on this AMD B350 motherboard to get dual channel mode support. 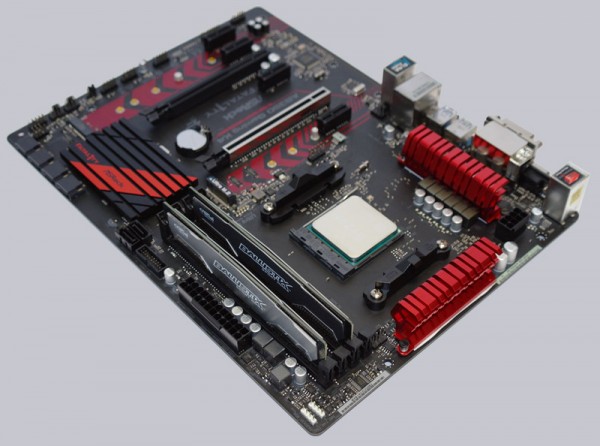 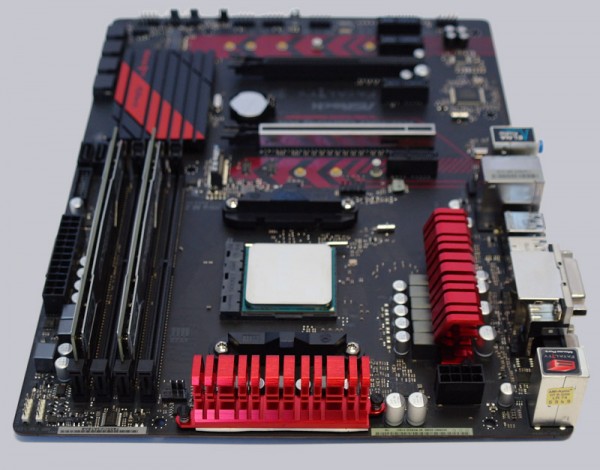 As we have already reported in detail on OCinside.de, for many CPU coolers new AMD Ryzen upgrade kits are required. To test such a AM4 upgrade kit, we have requested one from the company Enermax to make the tested Enermax ETS-t40f-BK suitable for AMD Ryzen. 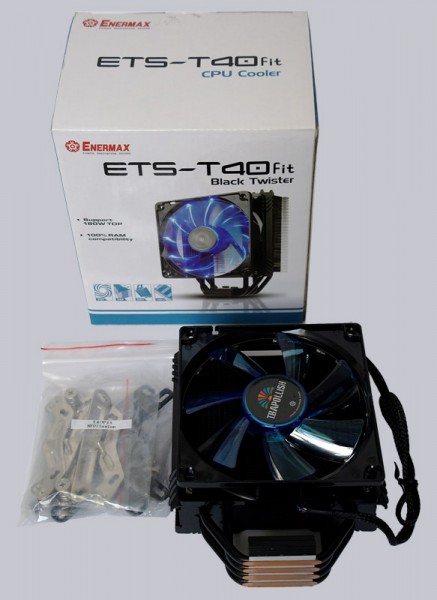 Here you can see the pre-assembled mounting bracket of the AM4 upgrade kit. Now put a drop of thermal paste on the CPU and install the cooler. 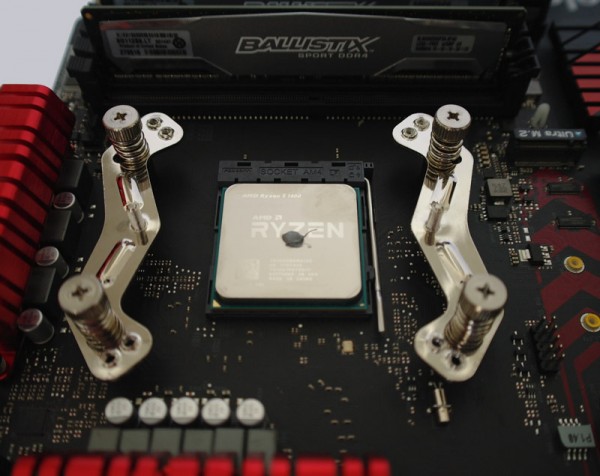 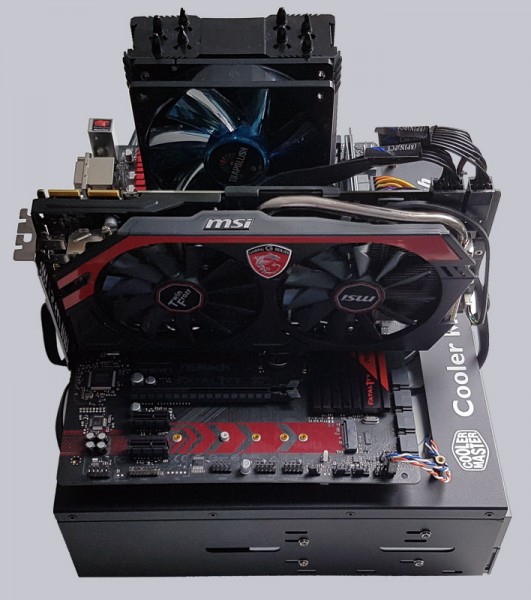 The AMD Promontory B350 Mainstream chipset stays cool, as you can see here on the thermal image. 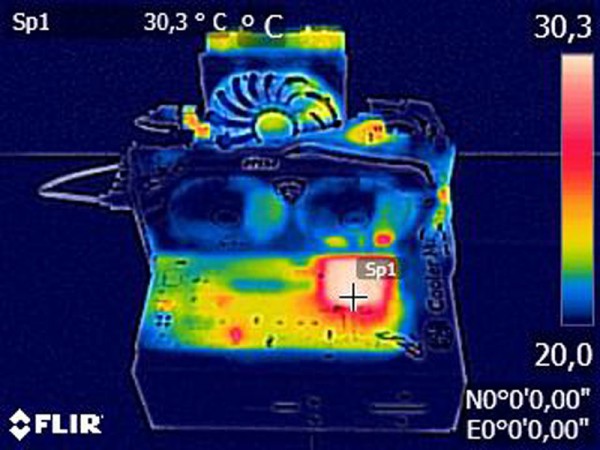 And here you can see the Intel test system with the new Icy Dock MB171SP-B Turbo Swap for fast replacement of SSD and HDD from front, this time without graphics card. 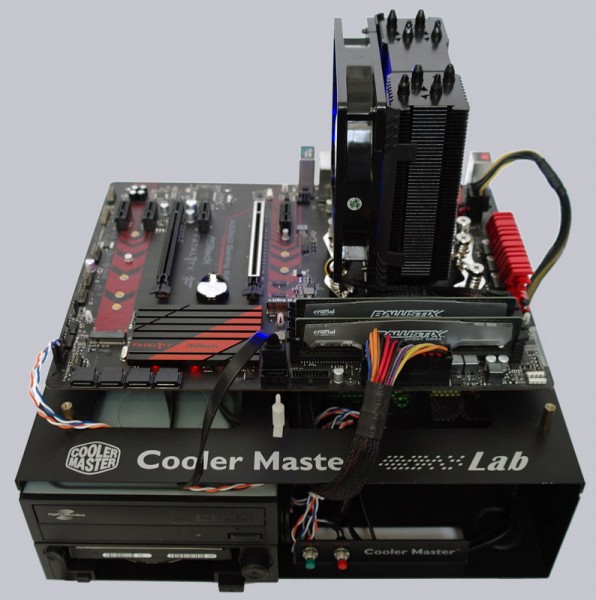 Without graphics card you can see very good the thermal distribution on the ASRock Fatal1ty AB350 Gaming K4 motherboard. In the left part, you can see the AMD B350 cooler temperature in the upper right you can see a clear temperature increasement of the voltage regulators. 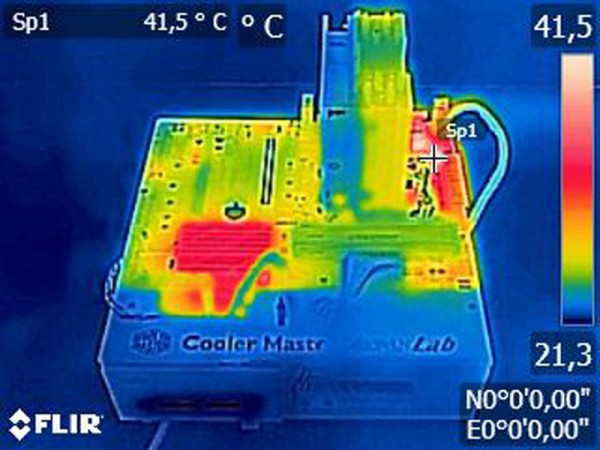 And here is another thermal picture of the voltage converters and 42A power chokes on the ASRock Fatal1ty AB350 Gaming K4 motherboard, to see the heating during higher overclocking. 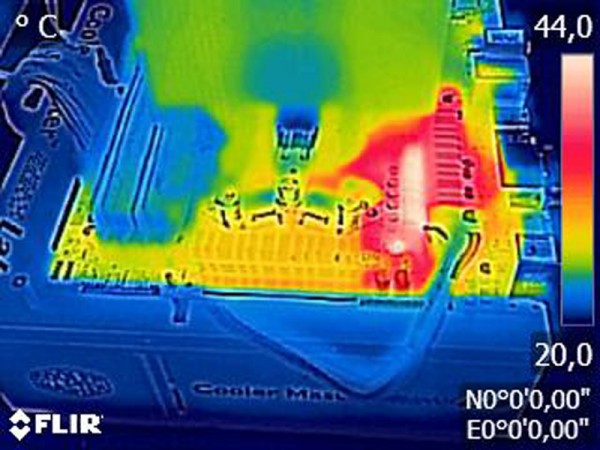 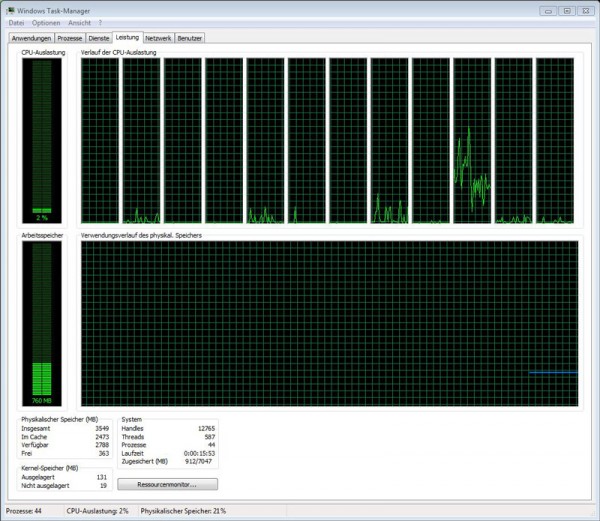 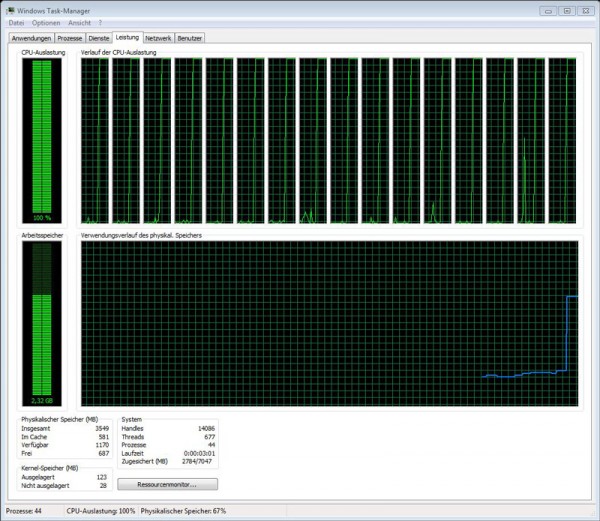