Here you can see a 360 degree view of the ASRock B450M Pro4 Micro ATX motherboard.

The differences between AMD X470 and B450 chipsets for the AMD Ryzen 2000 series are, as with the X370, B350 and A320 chipsets of the AMD Ryzen 1000 series, in the possible connection and thus also in the equipment. Furthermore, the hard disk caching tool StoreMI is now supported and the power consumption in idle mode has been reduced. The fact that older processors of the first AMD Ryzen generation run on the newer mainboards is also very advantageous for the consumer. If you only want to upgrade the motherboard to be up to date, you can do so after a short look into the list of supported CPUs. 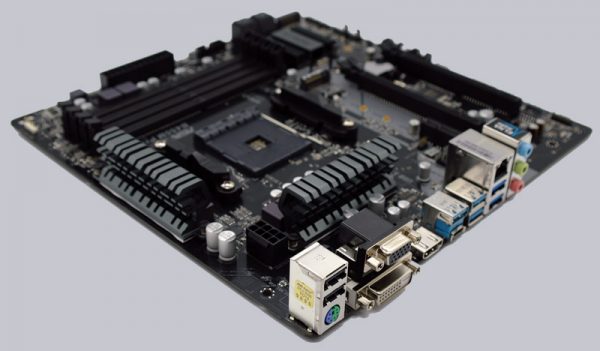 The motherboard features Premium 42A Power Chokes, Digi Power and 7.1 HD Audio with ELNA Audio Caps via the ALC892 Audio Codec. It also has a fast Ultra M.2 slot for a PCIe Gen3 x4 module with up to 32 Gb/s connection and a simple M.2 slot with up to 6 Gb/s.

Conventional RGB stripes can be connected to the white 4-pin 12V RGB headers to illuminate the case, for example. In addition, the B450M Pro4 even has a second 12V RGB LED connector at the top. And best of all, there is now even a Polychrome RGB connector that supports individually addressable LEDs when using addressable RGB stripes. However, no RGB LEDs are pre-installed on this motherboard.

The RGB LED Header is controlled by the supplied ASRock RGB LED software. With this AMD motherboard you can only make rudimentary settings graphically via the UEFI. All further settings are made with the ASRock RGB LED software in a graphical user interface. There you can select the colors in an RGB color selector and can set whether the RGB headers are to be controlled separately or together. The lighting can of course also be completely deactivated or used for all connections simultaneously. In the ASRock RGB LED menu you can select many effects, for example whether the LEDs should light up continuously, breathe, be controlled randomly or to the music. 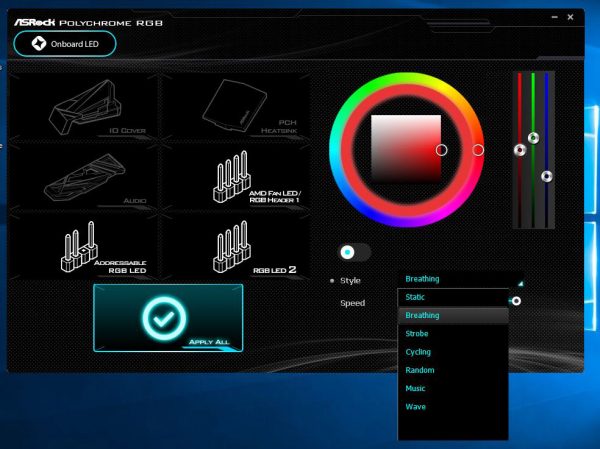 And with the addressable RGB port you even get completely new RGB features like Spring, Meteor, Stack, Rainbow, etc.. 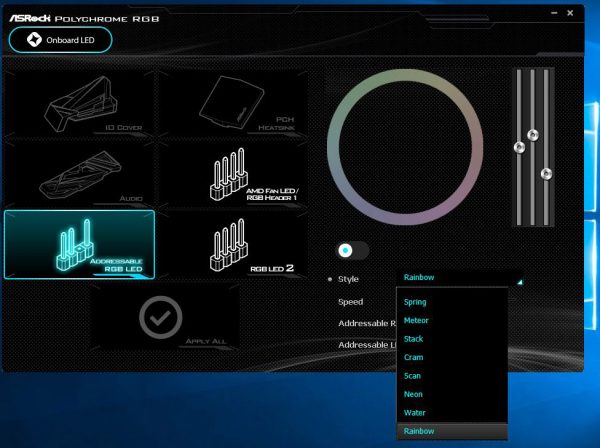 As with the recently tested ASRock H370 Performance motherboard up to 100 individually addressable LEDs are supported. 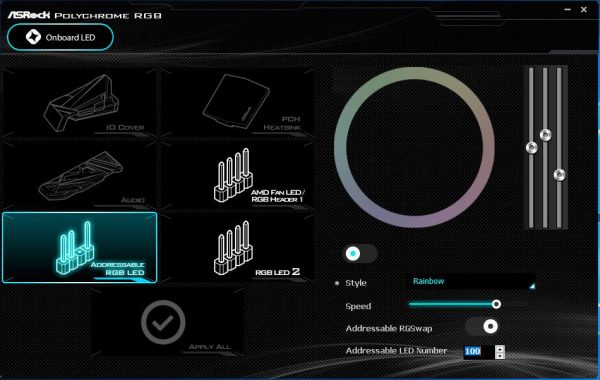 You get a lot of great RGB effects, which we presented in ASRock Polychrome RGB Software Video on our OCinside YouTube Channel.

But let’s get back to the equipment and features. Here you can see the internal USB 3.0 or USB3.1 Gen1 connector, the 24-pin ATX power connector and the second RGB connector on the far right.

The picture shows the side view of the mainboard with the two small heatsinks on the MOSFETs.

Here you can see the two disassembled aluminium heatsinks which are clamped by the heat conducting pad onto the voltage regulators. 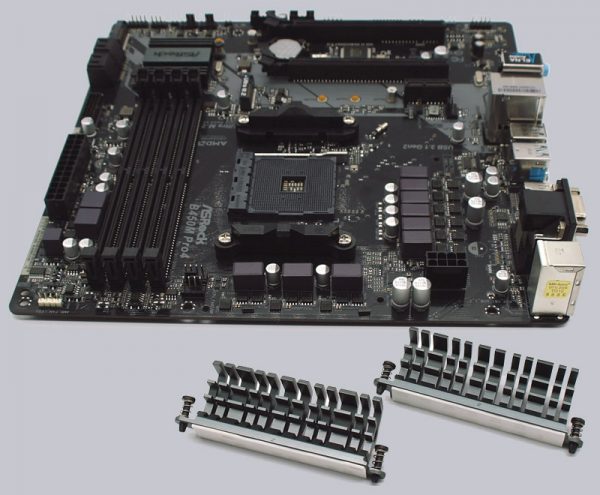 The so-called Smart Power Stage area is cooled under the heatsinks of the ASRock B450M Pro4. 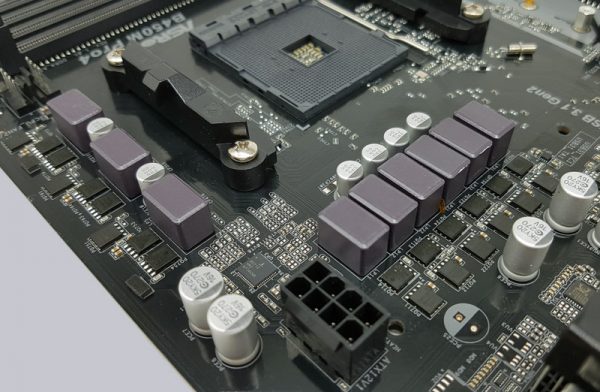 Here you can see again the chokes and MOSFETs, which are responsible for a stable power supply of the AMD CPU. 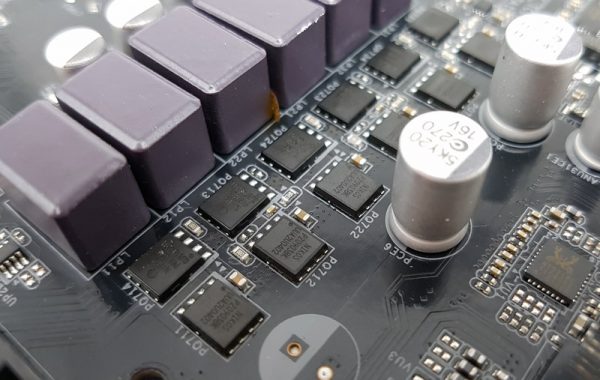 The ASRock B450M Pro4 board can be equipped with up to four DDR4 modules and can be upgraded depending on the operating system used (see list) up to a maximum of 64 GB RAM. Here you can see a picture of the four DDR4 memory slots with dual channel support.

Internally, two USB 2.0 ports for up to four optional USB ports and one USB 3.0 port for up to two optional USB 3.0 ports are available. The 20-pin header can be connected either to an optionally available USB3.0 front panel or to a case with USB3.0 support.

The ASRock B450M Pro4 is equipped with a Realtek RTL8111H, via which the 10/100/1000 network port on the ATX panel is realized. The LAN port is WoL capable, offers LAN cable detection, supports power efficient Ethernet according to 802.3az standard, PXE and more.

The ASRock B450M Pro4 motherboard features the simpler Realtek ALC892 audio codec with content protection, which supports 7.1 surround sound but can only output it analog via the internal HD front panel connector. Since there are only 3x 3.5mm jacks on the ATX panel and no optical SPDIF digital outputs, the 7.1 sound can only be output via the internal front panel audio header. Here ASRock offers considerably more audio inputs and outputs for higher priced motherboards. 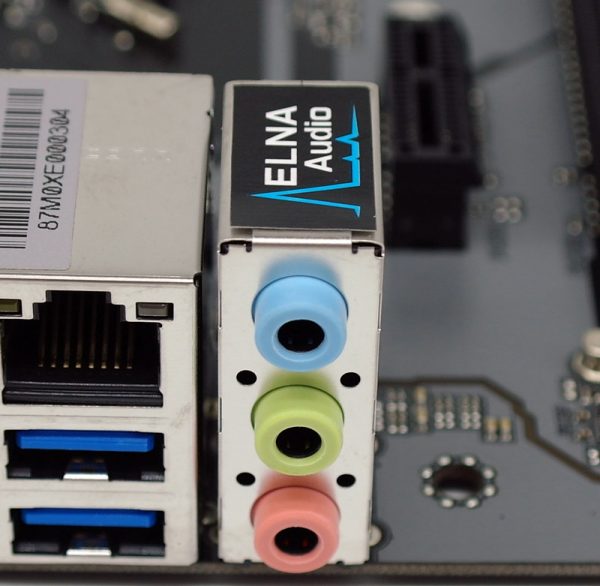 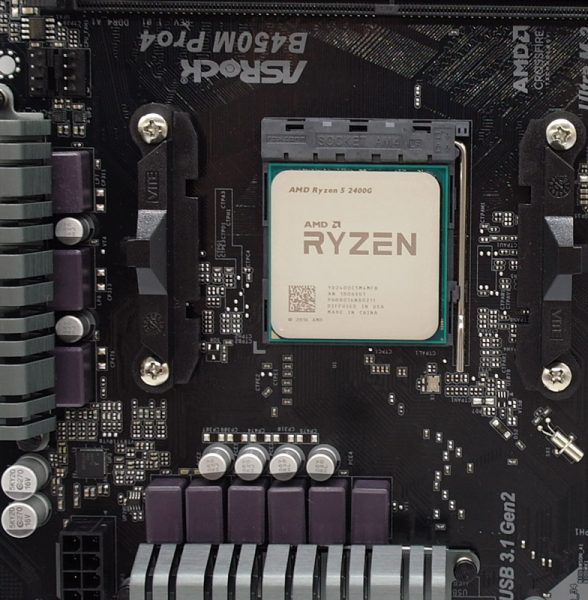 In the further course of the review we tested it with the AMD Ryzen 7 1800X CPU, which we already installed on our previous AMD AM4 motherboard tests and then even with the new AMD Ryzen 7 2700X Pinnacle Ridge CPU. The benchmark results can be found on the previous page of the test. 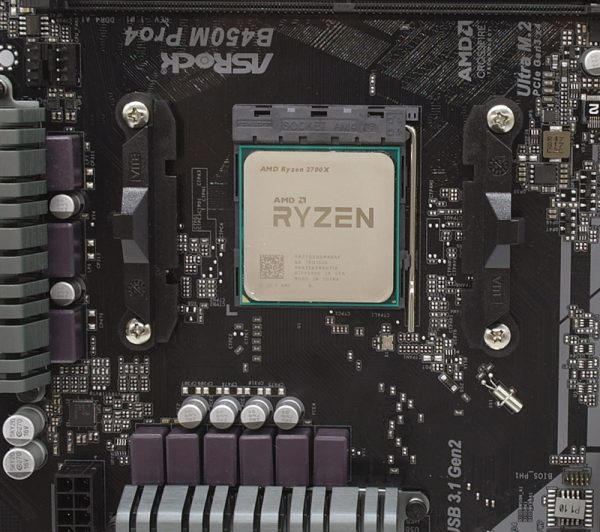 AMD Ryzen processors support Dual Channel Mode. This is the way how to install two memory modules on the AMD B450 motherboard to get dual channel support. 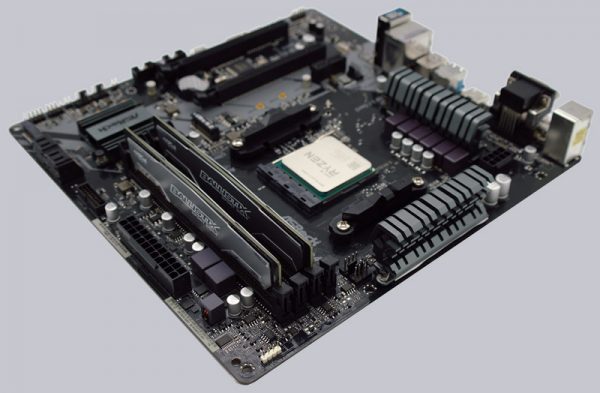 Here you can see the installation of the memory modules again from the side. 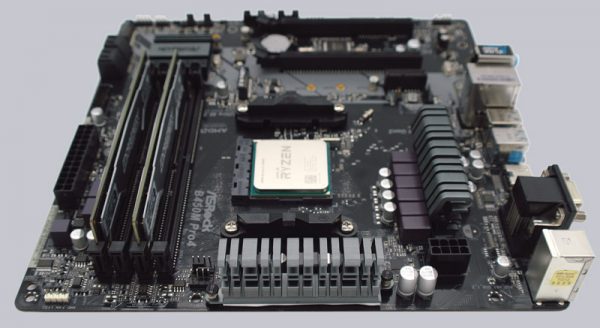 As we have already reported in detail on OCinside.de, a new AMD Ryzen Cooler Upgrade Kit is required for many CPU coolers. From the previous AM4 Mini ITX mainboard test we have upgraded directly to an AM4 socket Enermax ETS-T50 AXE DFP air cooler. The following picture shows the AMD AM4 test system including Enermax cooler and Icy Dock MB171SP-B Turbo Swap removable frame for quick exchange of SSD and HDD. 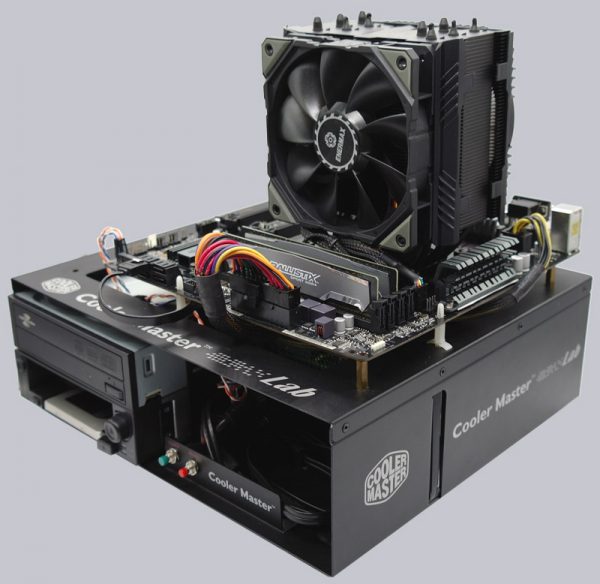 Then we dared a very special experiment with the new Arctic Alpine AM4 passive CPU cooler and wanted to know if the passive cooler was even enough for an AMD Ryzen 5 2400G PC.

We don’t want to give too much spoiler at this point, but as long as the CPU or APU has not continuous Prime95 load, the cooling works just fine with the AMD Ryzen 5 2400G processor and the Alpine AM4 passive. Here you can see the AMD AM4 test system with the completely silent, passive cooler from ARCTIC. 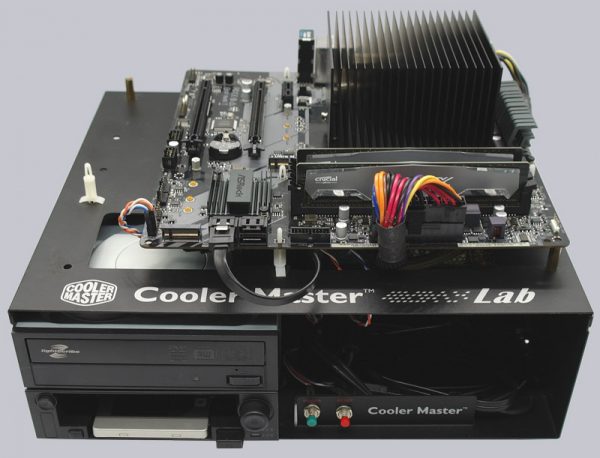 This is what the 4 cores (8 threads) of the AMD Ryzen 5 2400G processor look like in Windows 10 Task Manager at Prime95 full load. 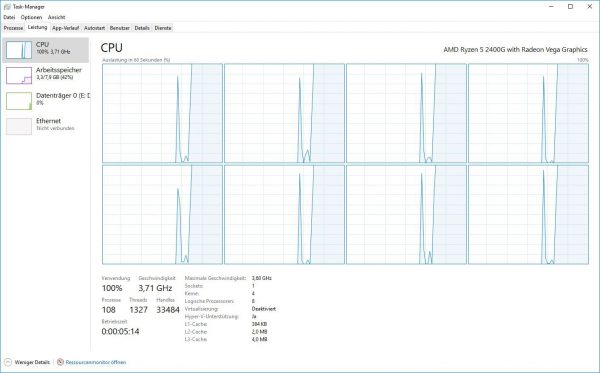 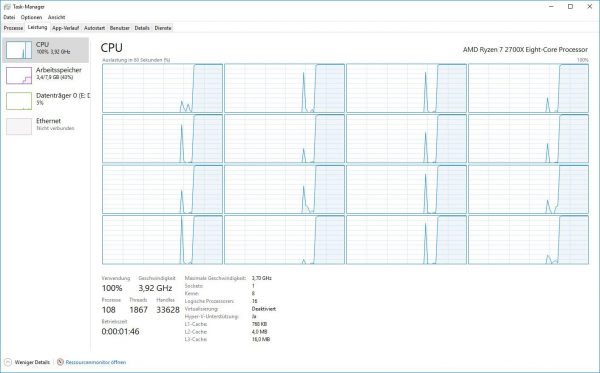 As you can see on the thermal image of the PC system, the AMD Promontory B450 chipset temperature is already getting a little higher. 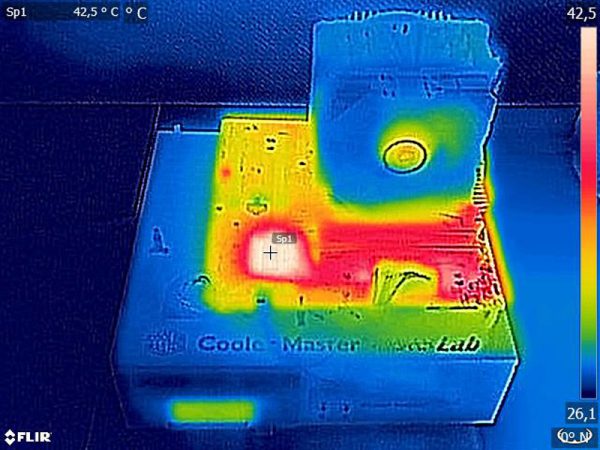 As you can see on the thermal image of the ASRock B450M Pro4 test PC, the heat of the voltage regulators and chokes could get a slightly larger cooler, which ASRock usually realizes with other motherboards with large coolers and heatpipe.