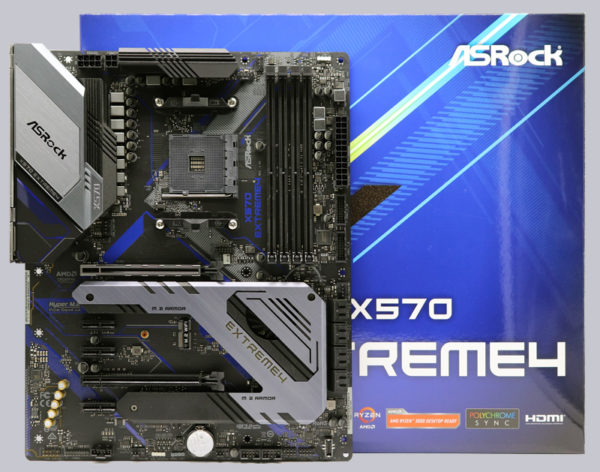 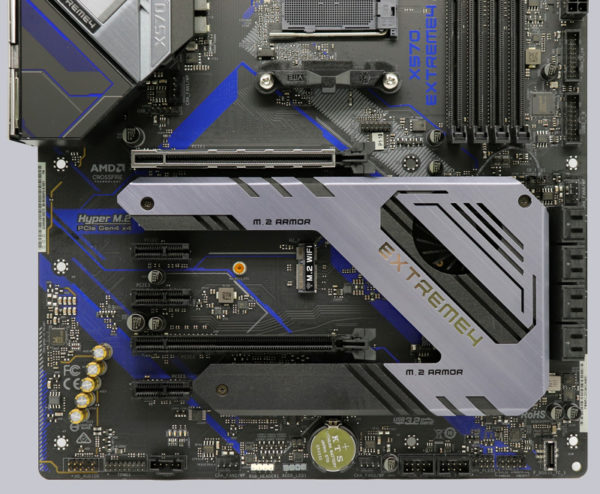 The two Hyper M.2 slots were mounted under the large chipset cooler, which on the AMD X570 has to be actively cooled again after a long time. As you can see here, we tested the X570 Extreme4 with a Crucial MX500 M.2 SSD 1TB SSD. 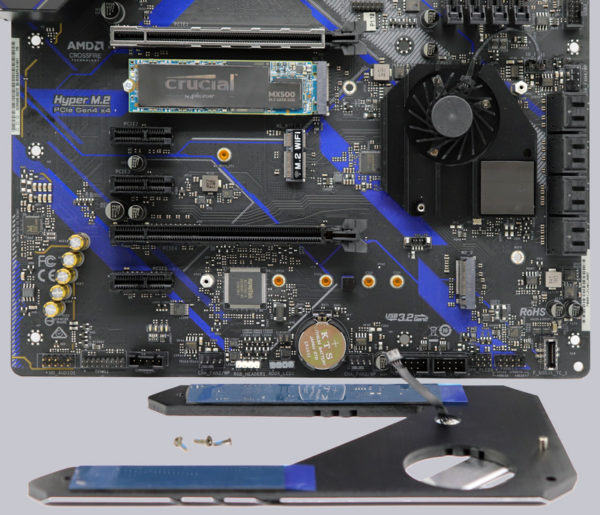 Here you can see again the small active chipset fan, which is necessary again with the AMD X570. Fortunately, the fan runs relatively quietly, so that it is drowned out by most CPU cooler fans without any problems. 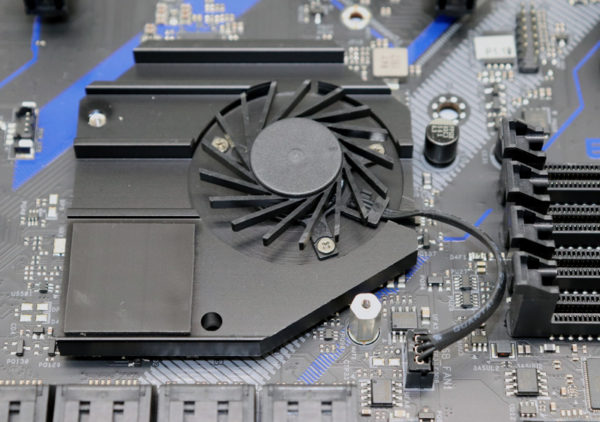 RGB lighting has certainly already become a selling point for many and ASRock has done a lot for this as well. Conventional RGB strips can be connected to the white 4-pin 12V RGB headers to illuminate the housing, for example. In addition, the X570 Extreme4 even has a second 12V RGB LED connector in the upper area. There is even a 3-pin 5V Polychrome RGB connector, which supports individually addressable LEDs when using addressable RGB strips.

And the best thing is that even addressable RGB LEDs are pre-installed under the chipset cooler and on the I/O panel on this motherboard. 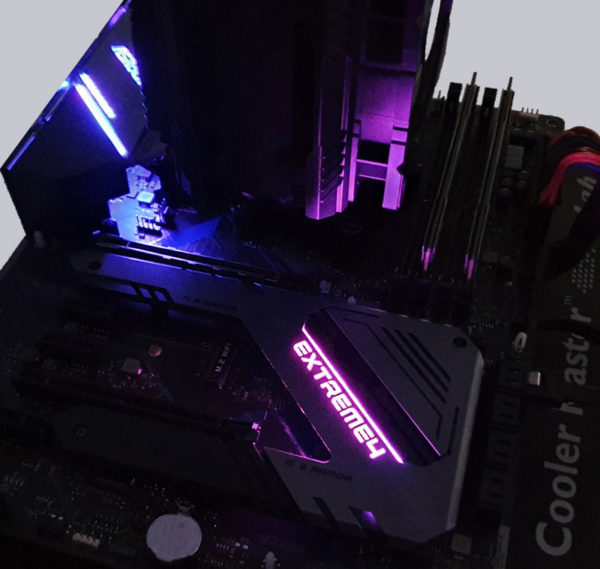 The RGB headers and the integrated RGB LEDs can be controlled via UEFI or via the supplied ASRock Polychrome RGB LED software. For example, you can select the colors in an RGB color selector and set whether the RGB headers should be controlled separately or together with the RGB lighting under the chipset cooler and the IO cover. The lighting can of course also be completely deactivated. 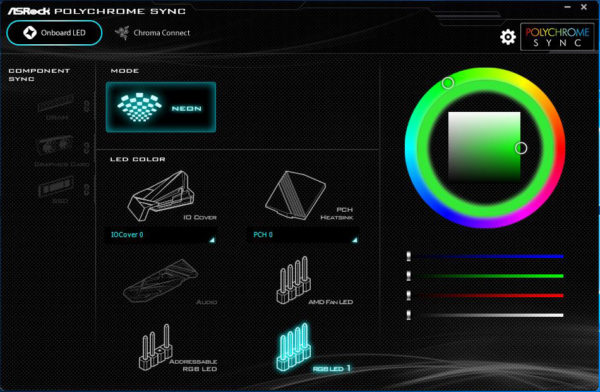 It is possible in the new ASRock Polychrome RGB software to control each LED under the chipset cooler and the IO cover individually! 😀 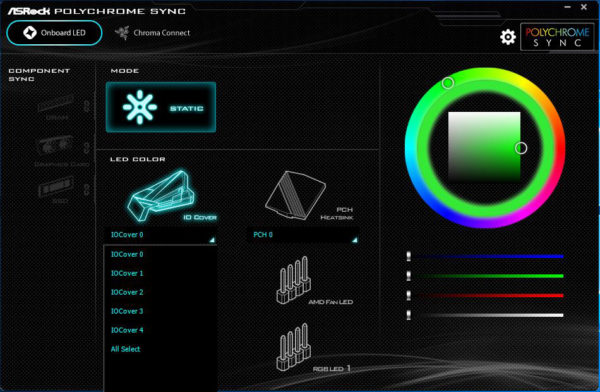 In the ASRock Polychrome RGB LED software, for example, you select the colors in an RGB color selector. And with the addressable RGB connector and the integrated ARGB LEDs you even get completely new RGB features like Spring, Meteor, Stack, Rainbow, etc. … 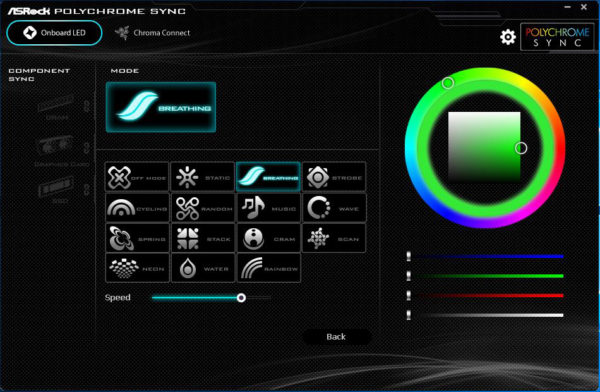 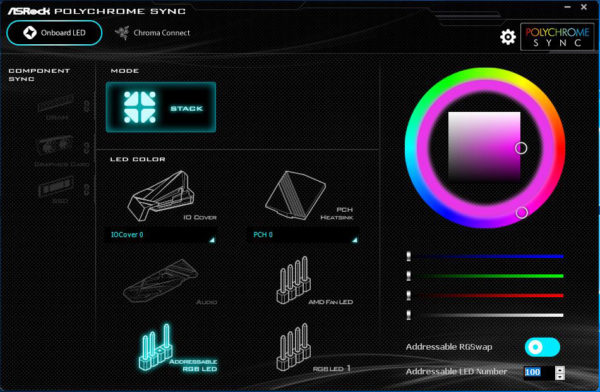 So you get lots of great RGB effects, which we presented in ASRock Polychrome RGB Software Video on our OCinside YouTube Channel (don’t forget to turn on the subtitles in English).

And to get a small impression of the very special ASRock X570 Extreme4 effects, we have created another video here.

Let’s get back to the equipment, though. Here you can see two internal USB3.2 Gen1 connectors (the front USB 3.2 Gen2 type-C connector is near the front panel connector), the 24-pin ATX power connector, some Nichicon capacitors and the second RGB connector.

The picture shows the side view of the mainboard with the two heat sinks made of aluminium alloy on the Intersil MOSFETs. 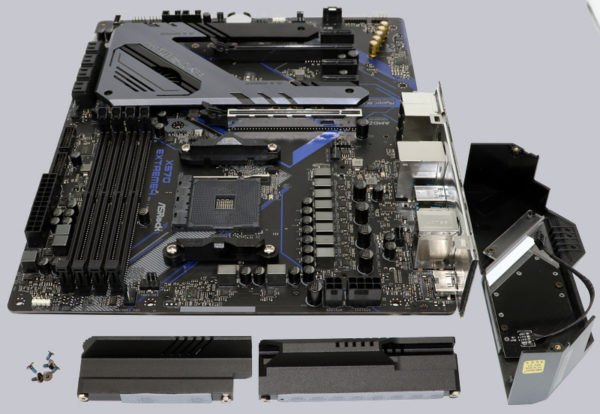 Under the heat sinks of the ASRock X570 Extreme4 the so-called Smart Power Stage area is cooled. 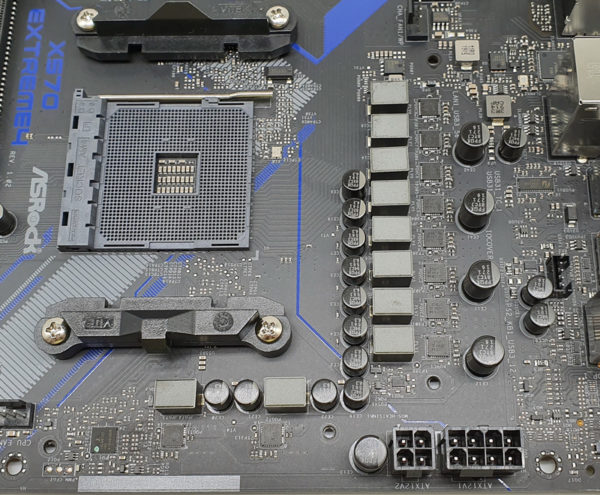 Here you can see the coils and the phases consisting of a total of 10 Vishay SiC634 50A phases with Intersil ISL69147 PWM controllers to ensure a stable power supply of the AMD CPU. 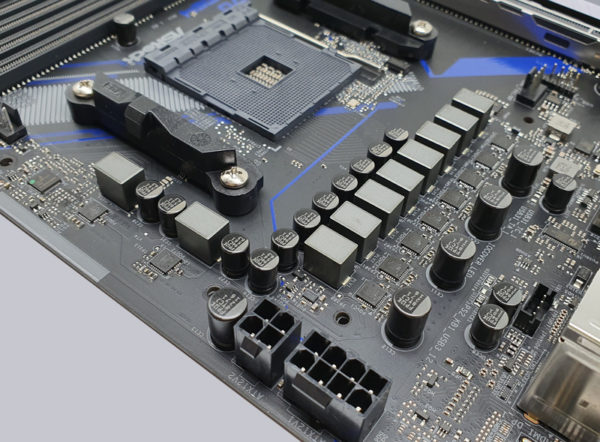 The ASRock X570 Extreme4 board can be equipped with up to four DDR4 modules and can be upgraded depending on the operating system used (see list) up to a maximum of 128 GB RAM. Here you can see a picture of the four DDR4 memory slots with dual channel support. 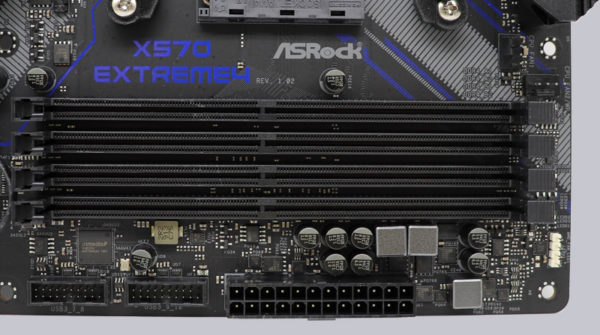 Thanks to XMP support (Extreme Memory Profile), XMP memory modules are set correctly with one mouse click in the UEFI and there are of course many more memory adjustments and even more OC options, but more about that later. Which exact RAM modules are officially supported, you should read before buying at ASRock on the memory support page, because this is especially (but not only) very important for AMD Ryzen systems.

The RAID drivers can be installed via the Easy RAID Installer point in the UEFI. The drivers are supplied for 64-bit Windows 10 on DVD and are also available for download on the ASRock support page, whereby the Windows 10 installation is currently preferred. 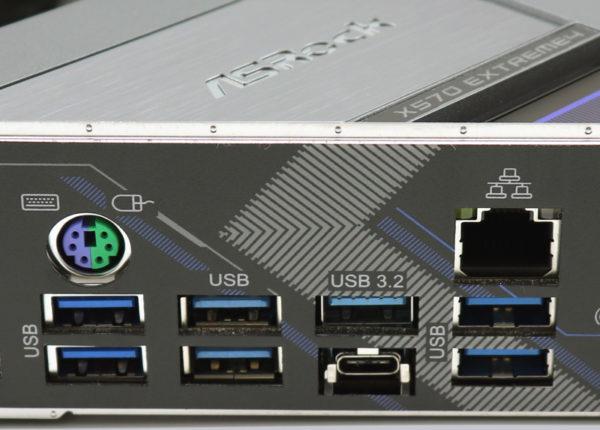 The ASRock X570 Extreme4 is equipped with a Realtek I211AT, via which the 10/100/1000 network port on the ATX panel is realized. The LAN port is WoL capable, offers LAN cable detection, supports power efficient Ethernet according to 802.3az standard, PXE and more. 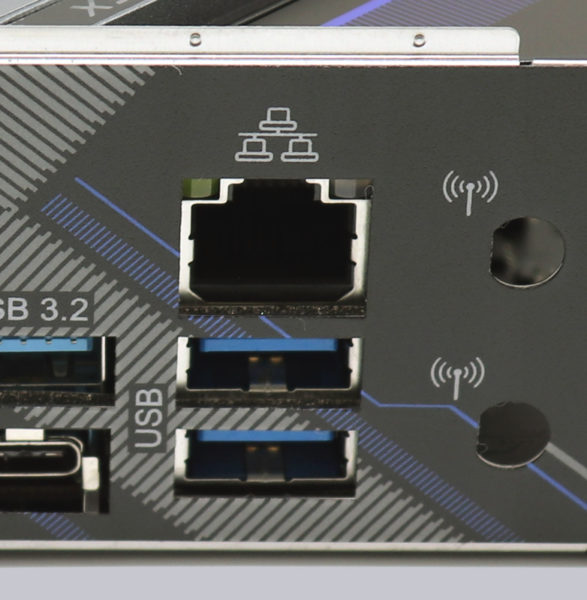 The ASRock X570 Extreme4 motherboard features the simpler Realtek ALC1220 audio codec with content protection and Purity Sound 4, which supports 7.1 surround sound and outputs this analog via 5x 3.5mm jack sockets on the ATX panel or via the internal front panel audio connector, for example. Furthermore there is an optical SPDIF digital output and Premium Blu-Ray support. This makes an additional sound card with digital outputs unnecessary for most users. 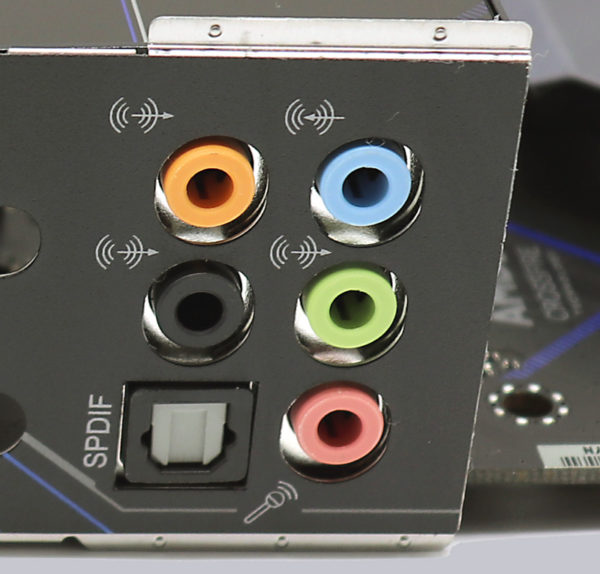 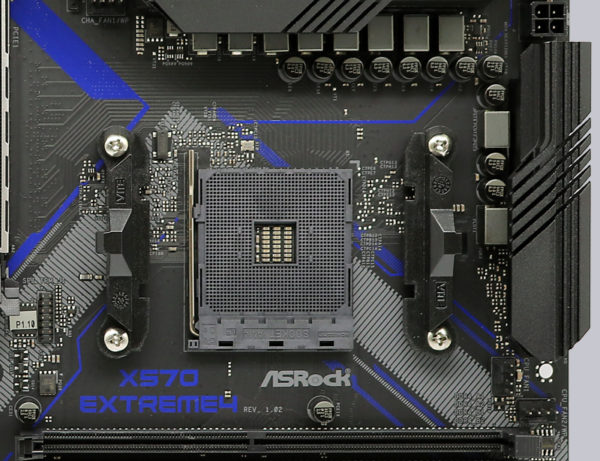 We tested the X570 Extreme4 motherboard with the AMD Ryzen 7 3800X processor. The AMD Ryzen 5 2400G processor with integrated graphics unit is unfortunately no longer supported by the X570, so we couldn’t make a direct comparison to the previous CPU on this X570 motherboard. 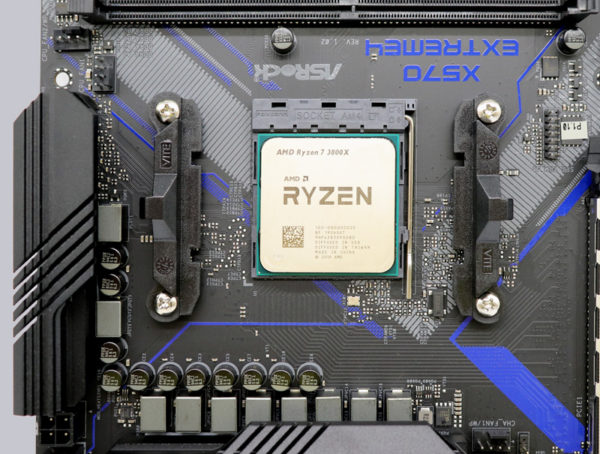 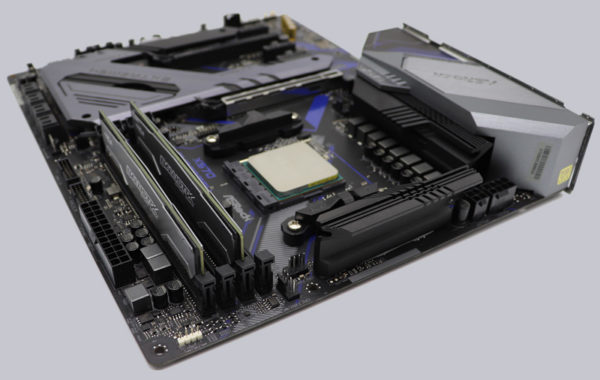 Here you can see the RAM assembly again from the side. 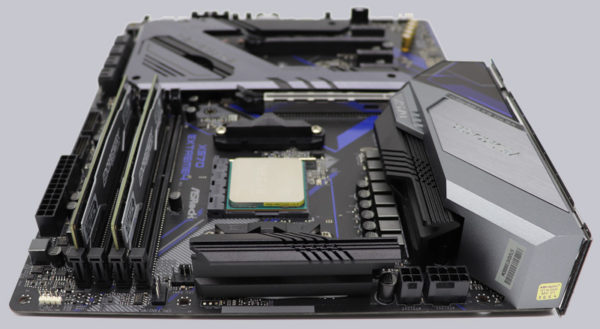 As we have already reported on OCinside.de, many CPU coolers require a new AMD Ryzen cooler Upgrade Kit. Meanwhile we have upgraded directly to a socket AM4 compatible Enermax ETS-T50 AXE DFP with ARCTIC MX4 thermal compound. On the following picture you can see the AMD AM4 test system with Enermax cooler and Icy Dock MB171SP-B Turbo Swap removable frame for quick exchange of the SSD and HDD. 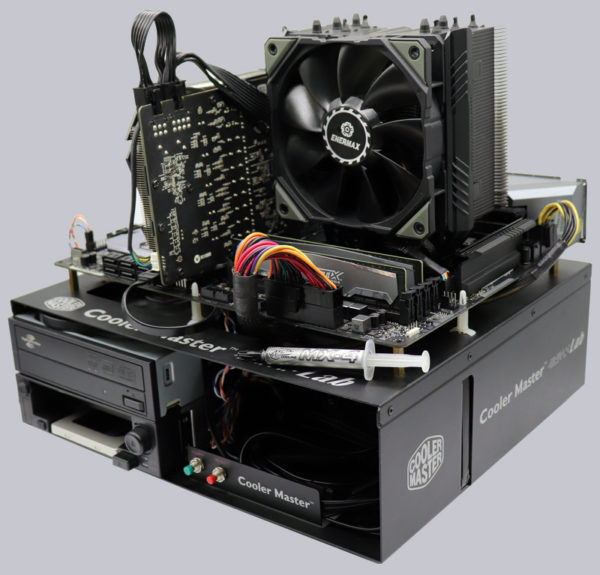 Here you can see the complete AMD AM4 test system from above without graphics card for a better demonstration of the lighting possibilities on the chipset and IO cover. 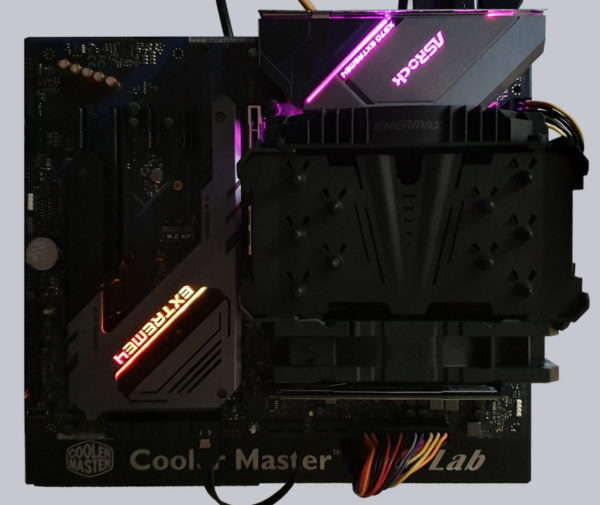 This is what the 8 cores (16 threads) of the AMD Ryzen 7 3800X processor look like in Windows 10 Taskmanager at Prime95 full load. 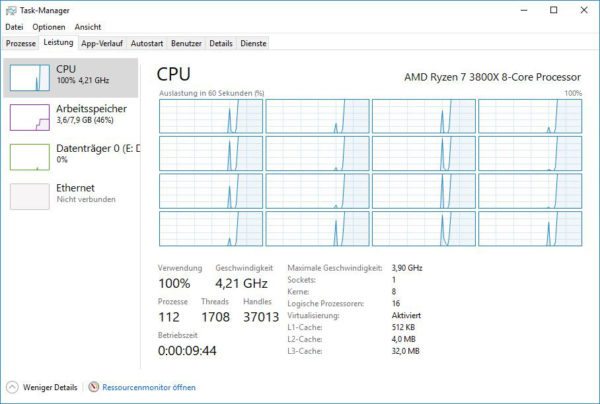 As you can see on the thermal image of the ASRock X570 Extreme4 test PC, the waste heat of the voltage regulators and coils is well dissipated via the heat sinks. 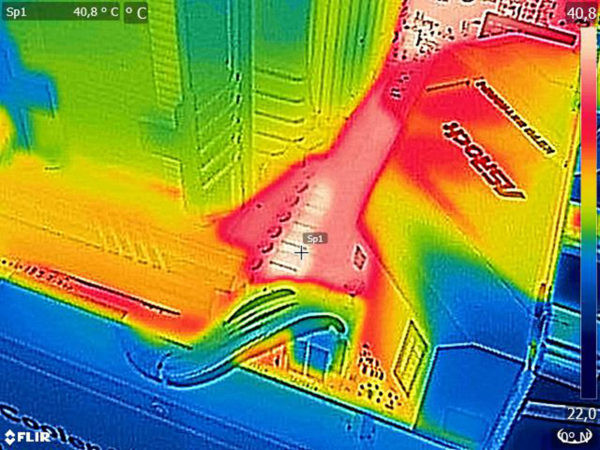