In order to make the benchmark course a bit more comprehensive, we decided on the following benchmarks:

We performed the stress tests with Unigine Heaven and the somewhat unrealistic Furmark. The graphics card’s power consumption was determined via AMD’s Radeon software and an external power meter. All tests took place in a closed case.

Since Sapphire’s card has a dual BIOS, we naturally tested both profiles. First, we look at the Silent BIOS. 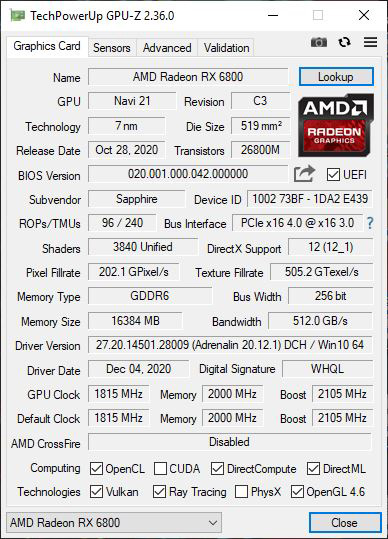 One reboot later, we can take a look at the performance BIOS. As expected, the pixel and texture fill rate increases slightly according to the slightly higher GPU clock. Otherwise, no differences can be noticed. 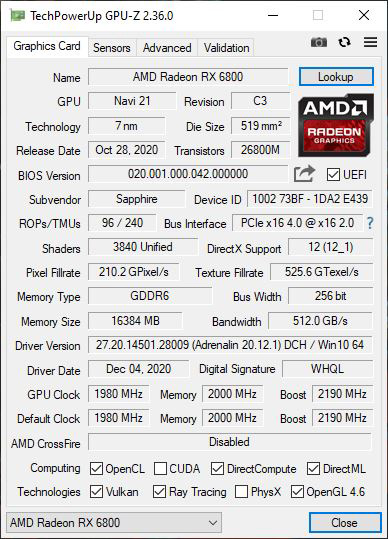 Of course, we also tested what we could achieve beyond Sapphire’s specified clock rates.

To say it in advance, we were able to coax a few noticeable MHz out of Sapphire’s RX 6800 Nitro. The GPU clocked at 2375 MHz in our test configuration, and we were able to overclock the memory to 2100 MHz. The power limit was the culprit here, because a more generous power limit would have certainly allowed for more. The temperature was not a problem at any point. 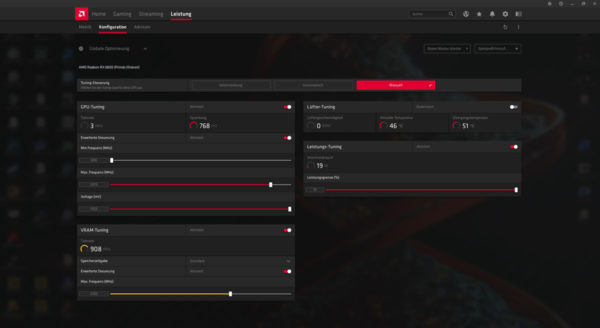 Let’s start with the first two benchmarks, Furmark and Unigine Heaven Extreme. As you can see here, the benchmarks scale wonderfully to the higher clock of the GPU. 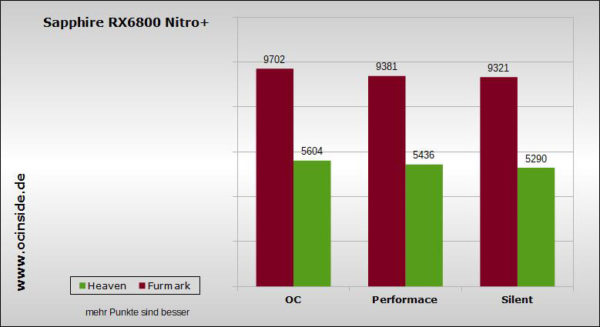 Unigine Superposition also shows a similar picture. While the last tests with Sapphire’s RX5700 XT still revealed a good 5000 points, the RX 6800 tickles out a good 8000 points here. A considerable increase compared to the previous series. 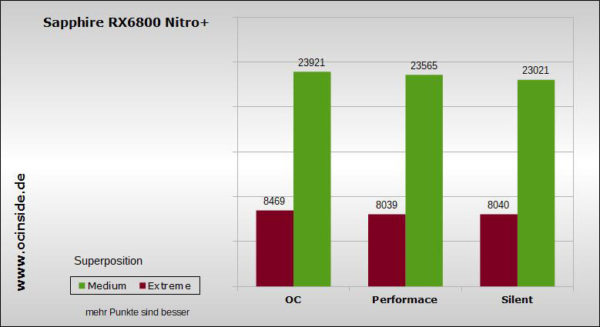 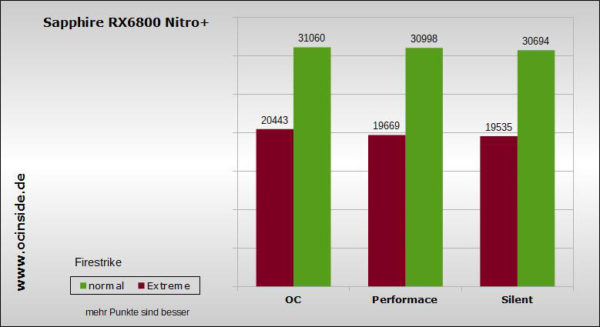 Finally, of course, the TimeSpy benchmarks. Besides Superposition, the overclocking is most noticeable here. 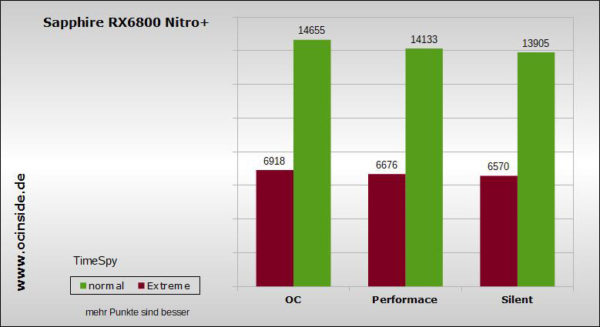 The predefined fan curve was not modified in each case. It is exciting to see that the graphics card hardly gets warmer by overclocking, since the fan speed is probably corrected upwards by the higher power limit.

Of course, we also wanted to see what the cooler is capable of under full load. For this, we manually set the fans to 100% after 20 minutes of Furmark in OC mode. In addition to the unspeakably loud, but expected, turbine noise, the temperature finally settled at 62°C after 5 minutes. A really good value in our eyes, because even a conversion to water is hardly worthwhile, at least not in terms of cooling performance.

By the way, we couldn’t find any differences in the acoustics between the two BIOS. We therefore clearly recommend running the graphics card in the faster performance mode.

After the benchmarks, power and temperature measurements, it was finally time for us to do with the graphics card what it was designed for … Gaming !!! :zocken:

We played exclusively in WQHD, where the Nitro+ also cut a very good figure. Apart from ray tracing, there was no game on our test system where the card looked busy. The non-existent background noise should also be emphasized very positively here.

Keyword Raytracing … AMD has given the RX 6800 a full-fledged hardware ray tracing based on DirectX 12. We could also activate this in the corresponding games without problems. However, this was usually acknowledged with significantly lower FPS and subjectively hardly better graphics. An exception was Battlefield 5, which ran better with ray tracing under DirectX 12 than without.

We have listed the FPS of the individual titles and quality settings in the following table. For an easy overview, everything above 60 FPS is marked green, below 60 FPS yellow and below 30 FPS red.

As you can see in the table, the Sapphire RX 6800 performs very well without ray tracing in WQHD. Even in demanding titles like Control, gamers will get their money’s worth. By the way, the graphics memory was rarely occupied with more than 8 GB even after longer gaming sessions. Fans of texture mods should have more than enough buffer here. Anyway, the 16GB graphics memory installed here will probably only become exciting in 2-3 years when more console ports of the new generation appear on the PC.