Let us take a look at the supplied satellite speakers. 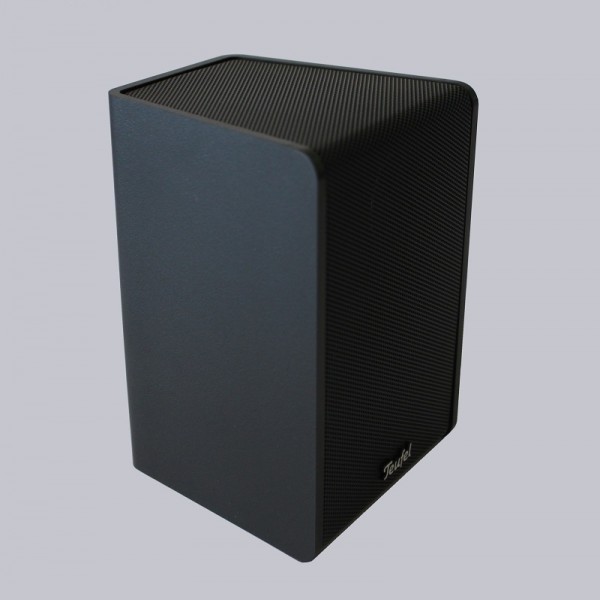 A beautiful lettering adorns the front panel, which unfortunately you can not take off. Why not show what you have? Of course, this is to protect the membrane from damage. 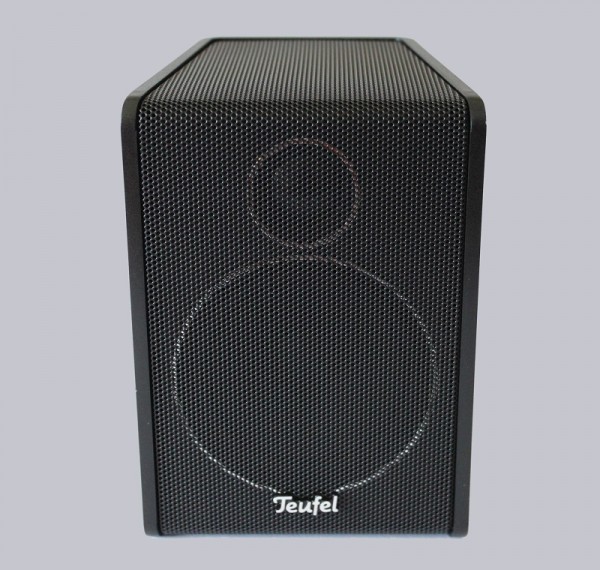 Compared to its predecessor, the CS 25 FCR speakers Mk3 has grown significantly. In plain black held, Chrome rings adorn the membrane, of which the speaker has two. It is a midrange (80 mm) and a tweeter (19 mm). 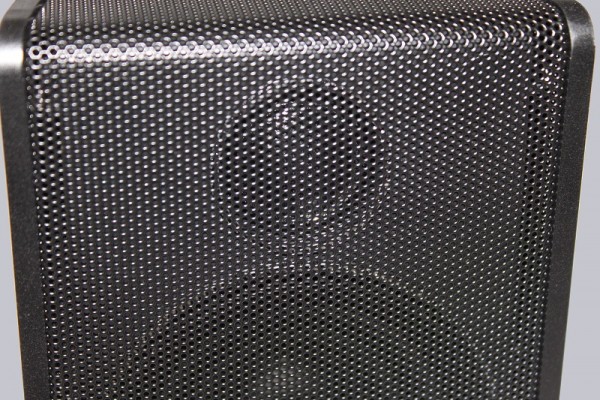 No wall brackets are included. The speakers have on the back side one or two hole/s with which you can attach them to the wall. Wall mounts can be purchased at a price of 29 euros a piece at Teufel. These can then be adjusted both horizontally and vertically. 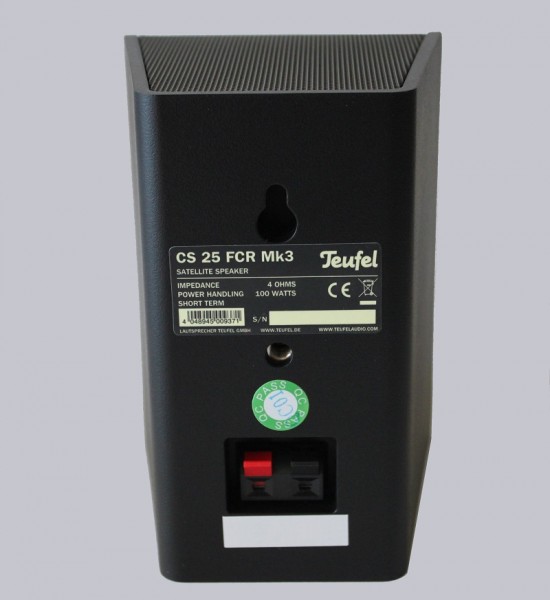 One aspect that we dont like so much is the connecting terminal, which works with simple clamps. Partly it may happen that you draw a cable accidentally from the terminal. Also, one should not use a single wire or soldered cables, as so not a 100% electrical transition can be ensured. This is due to the simple expandability of the system. Fast replacement of the cable, and use of existing cabling was considered at this point more important than proprietary connector systems. 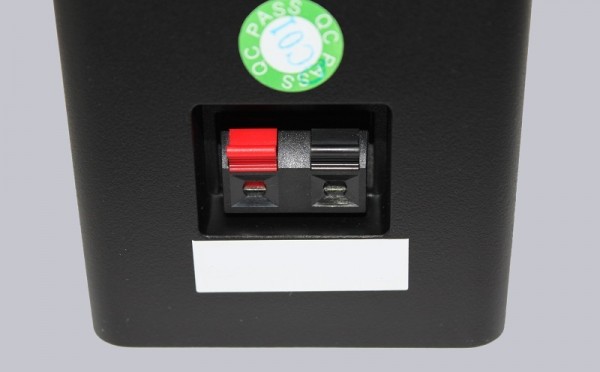 Similarly constructed is also the center speaker CS 35 C Mk3, which, however, is slightly wider than the satellite speaker. 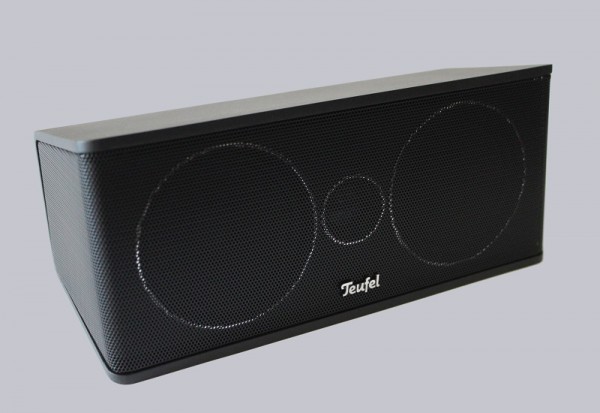 The reason is that two 80 mm midrange and a 19 mm tweeter are built into it. 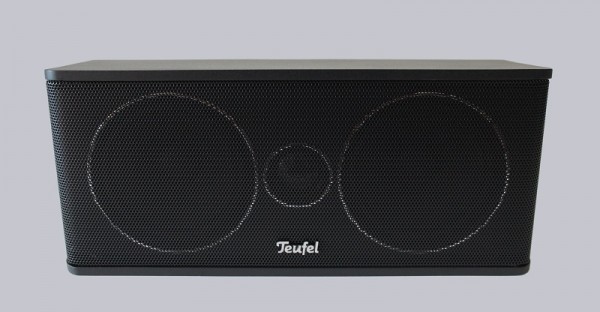 By chrome rings accented, the center speaker has also holes to mount it on the wall. 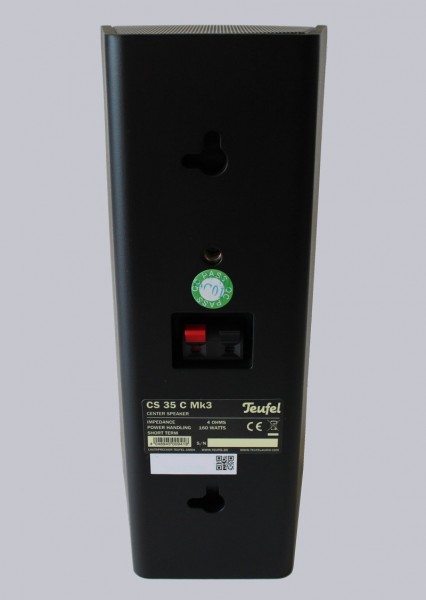 There is also included a small stand … 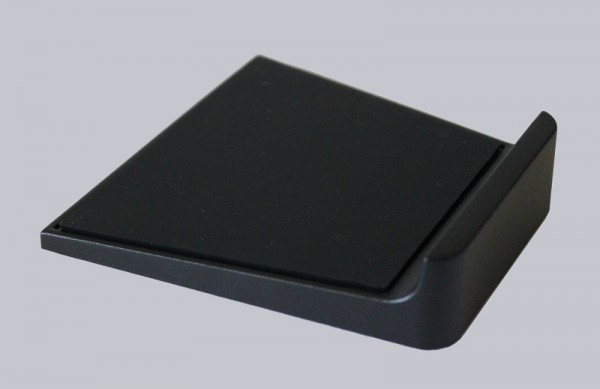 … which allows you to place the center speaker at a slight angle on the table. 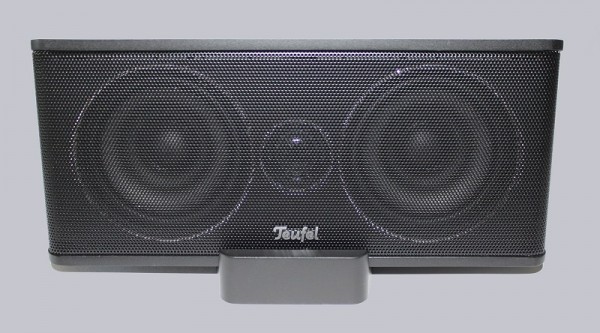 In the package are also included adhesive rubber feet, with which you can also place the satellite speakers. Of course, a wall bracket is also available for the center speaker as already mentioned. 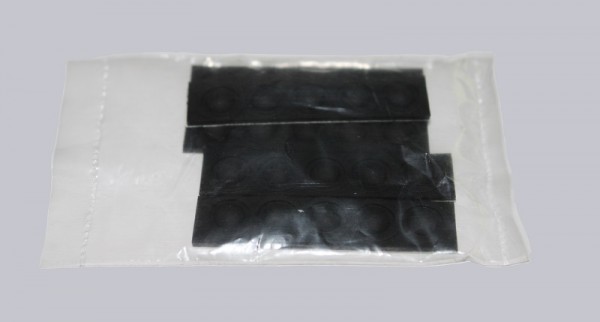 But we come to the really core of this set. The active subwoofer CM 2014 SW. The subwoofer is so powerful that it should be placed on a concrete foundation! Incredible 27 kg shows this monster on the scale! Here you can not even recognize the membrane at first glance. 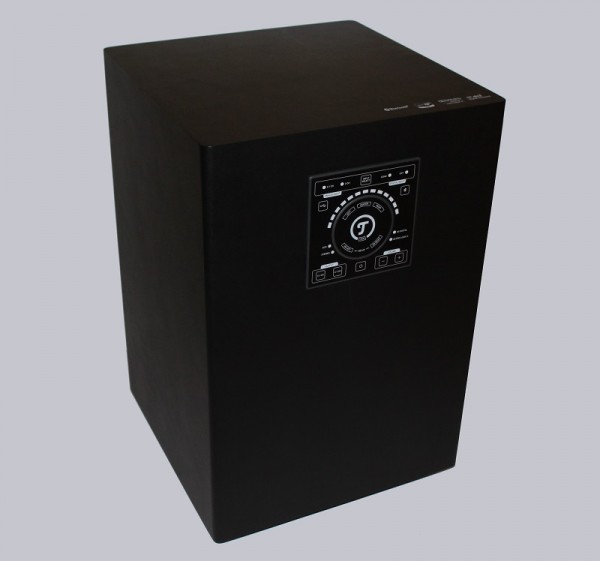 With a look under the enclosure it can be quickly realized why. This model is a subwoofer that operates on the downfire principle. The sound waves propagate along the floor. This has the advantage that the sound spreads evenly throughout the room. 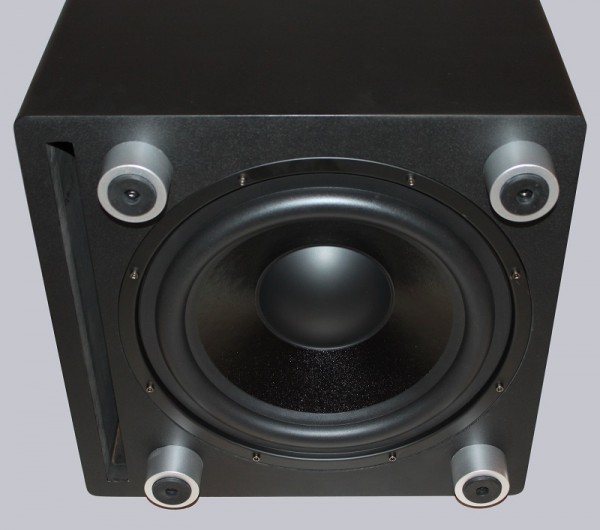 They have decided to use plastic feet with rubber buffer. Even better would be at this point – because of the downfire principle – small spikes as standing feet. This would decouple the subwoofer a bit more from the ground and thus had a better sound wave transmission. Such spikes can be easily retrofitted, they are yet to find in any well-stocked HiFi shop. 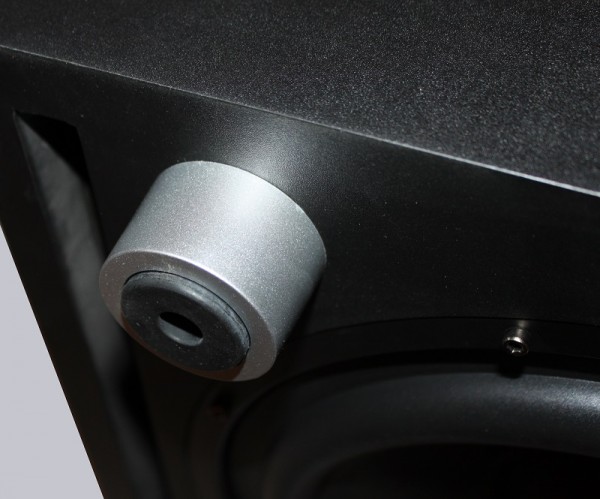 Even more interesting is the front panel, which holds some surprises. The panel has a touch function that has very accurate responding. In addition to the selection field for the sources, of course, there is also the volume control, the output channels and the on/off button on the control panel. 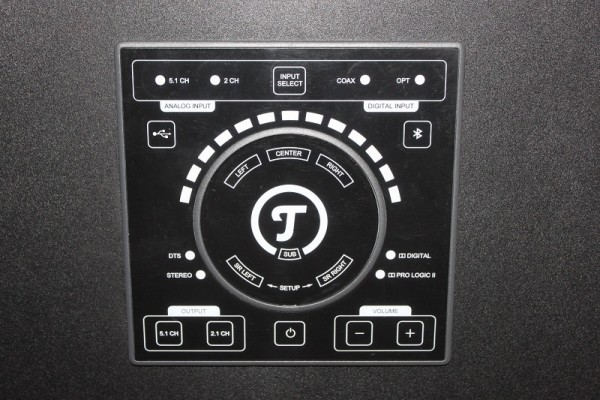 However, the highlights are the two special sources that the Teufel Concept E 450 Digital 5.1 set has to offer. It is a Bluetooth connection that allows it to connect a mobile device and play music, thanks Bluetooth aptX codec, in high quality. 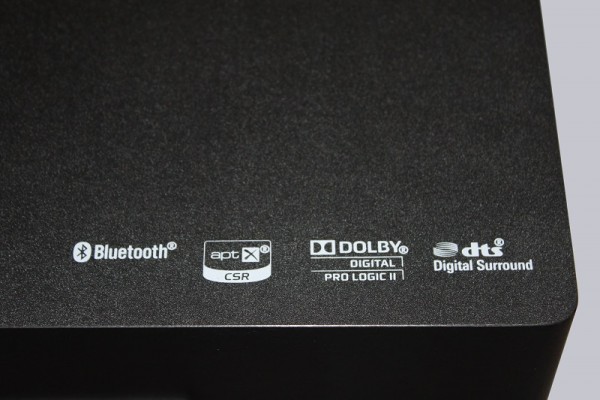 But the back of the subwoofer provides additional connection options. 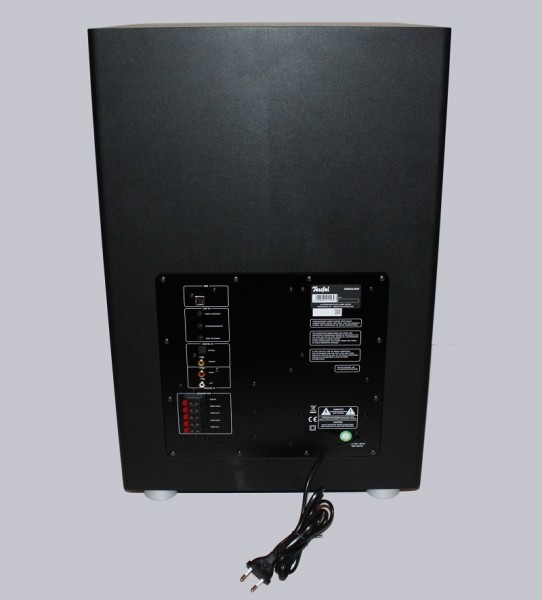 Especially laptops or ultrabooks usually do not have 5.1 sound cards. However, in order to enjoy the surround sounds of Concept E 450 Digitale, Teufel has implemented a USB sound card inside his audio gaming flagship. It is connected via an USB Type B connection. 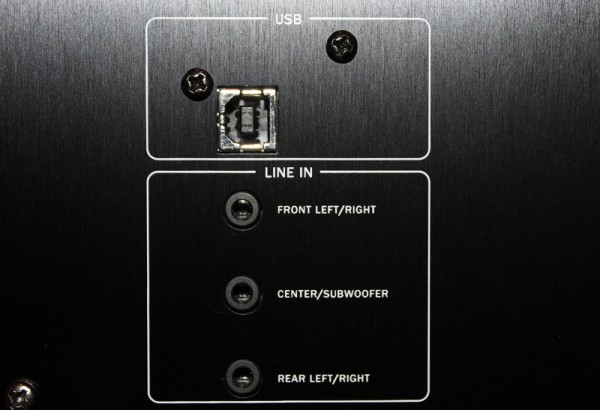 Among these there are also analog inputs to connect the system with 3.5 mm jack plugs, for example, with an existing sound card. Of course, the analog RCA inputs may not be missing, used by some older audio devices (keyboard, etc.) nowadays still used.
Above this are the digital inputs, Toslink jack, and a digital RCA connector (Coax). 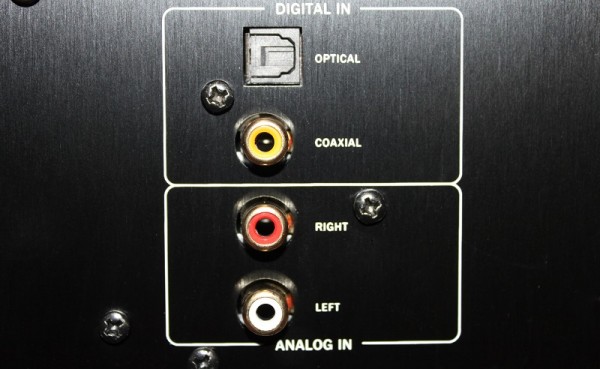 At the lower end are the formerly mentioned same terminals for the speakers. 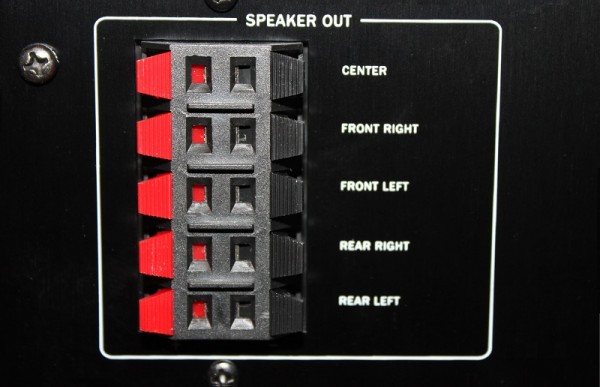 The side view of the subwoofer looks somehow monolithic and fits well in a simple gamer room. Positive is to evaluate in this case, that Teufel did not use sensitive piano lacquer. Unattractive scratches really kills the fun of such a expensive investment, so you only need to protect the touch panel from damage. 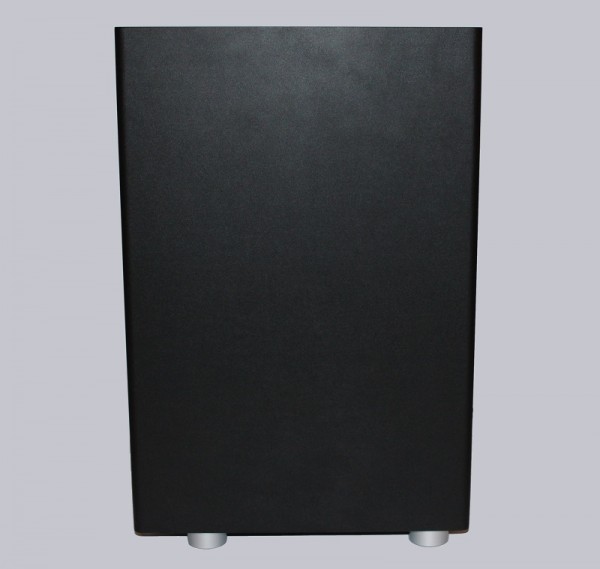 But we come to the last two components that complete the set. Firstly, we have the speaker cable. Designed as a ring of 30 meters 2-wire stranded, the buyer may choose his cable lengths free. When you connect, you should pay attention to the correct polarity of all speakers. The white line on the speaker cable helps to do that. 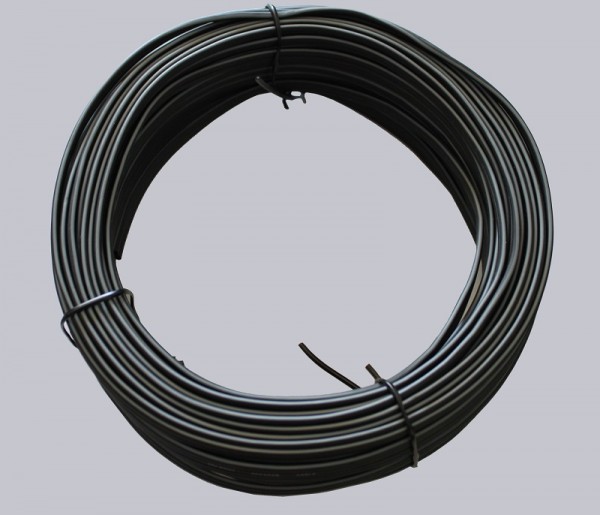 Furthermore there included an USB connection cable for the mentioned integrated sound card. This is a 2 meter long cable, which is white for better recognition at the back of the computer. It has red connector, making a confusion virtually impossible. 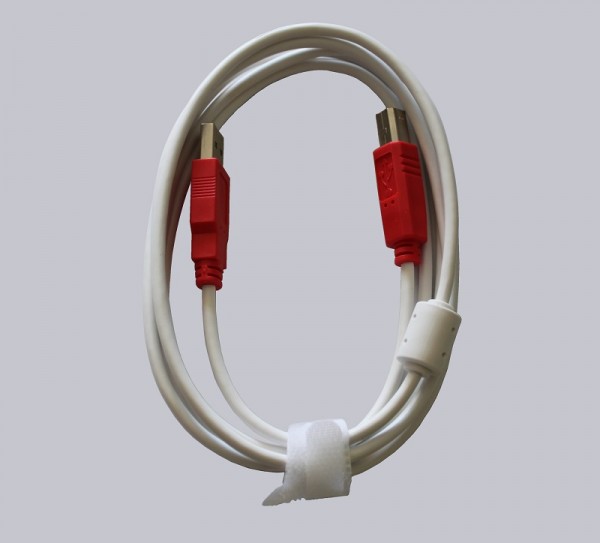 That brings us already at the end of our small tour. Now we go on to the practical test, in which the Teufel Concept E 450 Digital can show what it’s really capable of.