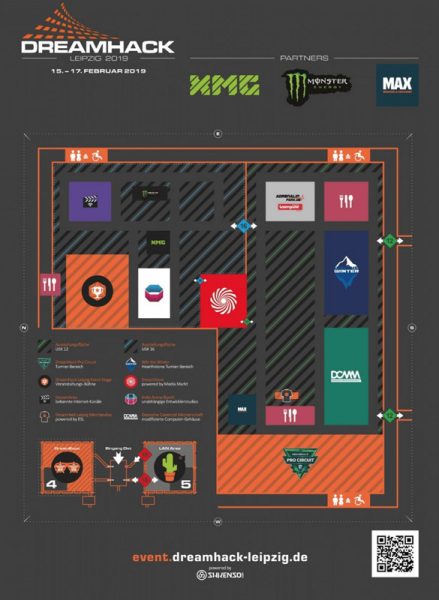 The hall of the DreamHack was divided into two parts by the organizers: an area that was accessible to everyone and a over 16 area, which was only accessible with a ribbon, which was obtained directly at the entrance. USK is an Entertainment Software Self-Regulation in Germany.

Right next to the entrance was the big Rocket League stage. The design, visibility and lighting very attractive and atmospheric, the sound was very good. In front of the stage, over 300 seats were set up, but they were filled very quickly during trendy matches. Also part of the Rocket League area was the ProCircuit, where the teams could play warm. Separated from the normal audience, it was just barricade so you could interact with the players and watch them.
Also near the Rocket League Arena were small food and beverage stalls, which unfortunately as usual at trade fairs convinced only with high prices and low quality.

Announced by the DreamHack the Casemod Championship and the live modding. A total of approximately 20 casemods and about 10 keyboard mods were presented. Many PCs and cases were very elaborate and quite appealing. Unfortunately, the presentation of the stands was not appealing at all. Tables and back banners were very careless and not attractively lit. Likewise the Livemodding, four teams competed for safety reasons behind Plexiglas walls. Interaction with the teams was not possible. Despite public modding in front of a young audience and the use of power tools, little emphasis was placed on the use of safety equipment.

Also in the hall were four larger merchandising stands, both on the topic of eSports, as well as twitch, stuffed animals, game posters and figures. The nerd culture was delivered here a lot.

Slightly unremarkable was the booth of ARCTIC, who introduced some new cool products and interesting monitor arms. In the u16 hall and in the selection of the manufacturers, the stand seemed a bit out of place. Of course we took a closer look and found 2 prototypes! A new aRGB Illuminated Air Cooler, the Arctic Freezer 50 TR, which features 8 heat pipes and 2 fans. From one of the nice Arctic employees, we could also elicit that more coolers and individual fans are planned with aRGB. Arctic finally jumped on the RGB train …: D The second prototype was the new Arctic Liquid Freezer 2, Arctic’s first AIO water cooling, which is completely developed and produced by Arctic. The cooler also has a fan to provide VRM cooling.

Another food area and a small area for laser tagging rounded off the u16 area. The largest part of the manufacturers, as well as the main stage was in the o16 area.

Click on the following picture to open the gallery with the DreamHack u16 pictures. With the cursor keys right / left or with the arrow keys within the picture you get to the next or previous picture.

The following video shows a short excerpt from the exciting Rocket League Tournament.

Continue to the o16 area on the DreamHack …