For measurement, the following tools were used: Prime95 and SpeedFan

The Antec K240 also competes against the AMD boxed cooler, but you may also want to check out our recently released test of the Cooler Master MA620P that was tested under the same conditions and compared the results.

As the AMD Boxed cooler is not really a serious opponent for a 240 AIO watercooling, we have sent the Noctua NH-D15 into the race like during the Cooler Master MA620P review.

The Antec K240 water cooling naturally beats the AMD Boxed cooler both in terms of temperature and noise level. However, it is narrowly beaten by the Noctua cooler. 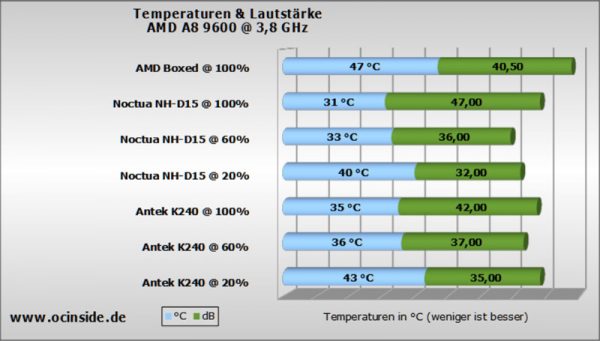 The fans make a good impression, but are in the result slightly negatively influenced by the pump, which we will see soon in the video.

The fans make a usual good impression. Up to 40% perfect for silent settings, 60% is in the middle range and 80% is a bit louder but still OK. The jump to 100% is then a little bigger, this attitude should be avoided, at least as a silent lover, since the cooling performance does not increase to the same extent. The fan noise is free of disorders.

It is not uncommon for AIO water coolers to encounter a slight pump hum or whirring, which we unfortunately also found in the Antec K240. The alignment also played no roles, the hum remained constant, no matter how the radiator was positioned.

However, if you turn on the fans, the whirring goes down quite quickly in the fan noise.

In the video you can also see that the fan lighting is brighter or darker depending on the speed. The blue glow gives the milky rings a nice effect. 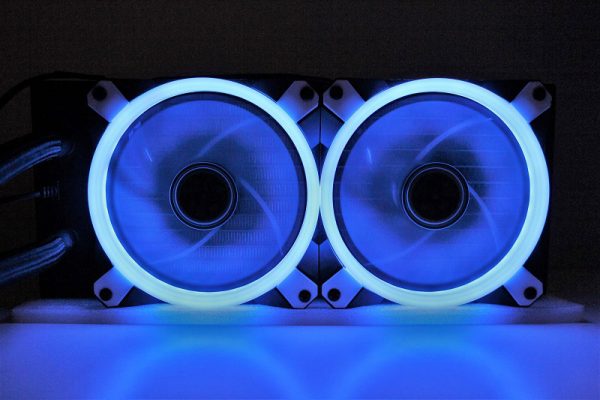