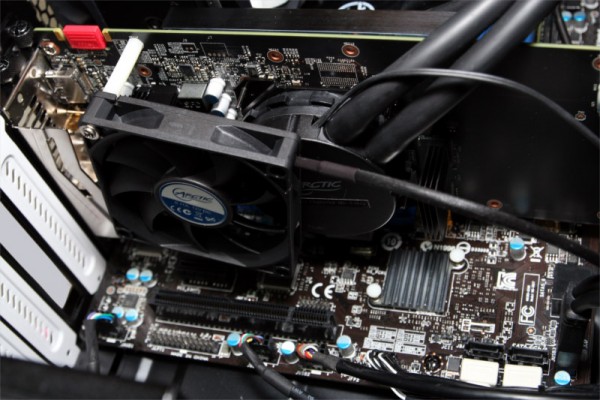 There were some discrepancies concerning the fan speed. The 140mm fan does not supply a signal to the mainboard and the 80mm fan does not reach 2400rpm but 2000rpm according to MSI afterburner. Also the bigger fan rotates too fast when plugged to the video card, Arctic addressed this problem in an info leaflet and locates it in nVidias fan controller which works with fixed rpm instead of percentages.
Therefore we preferred to connect the fan to the mainboard.

After talking so much about fans and controlling them, we like to measure their sound volume. The small 80mm fan is astonishing quiet for its size. Only above ~1300rpm (~50% in Afterburner) we could hear it outside the system. At 100% you can clearly hear the higher pitched sound but the overall volume is still dominated by the 140mm fan. As most 140mm fans, it starts being audible at about 800rpm because of the airflow.

Even though the optics give the impression of a lower quality fan, we could neither hear any grinding or clattering sounds.

After first start-up, there were some unpleasant noises coming from the circulation, but the manual states that this is completely normal if the radiator is mounted below the pump like in our case. After about 60 minutes those noises vanished completely.

While idle the pump is definitely the acoustic weak-spot. Arctic played safe and took away the option to let the user control the pump. Therefore it permanently runs at full speed which generates a high-pitched noise very similar to the hated coil-whining which can be clearly heard as long as the fans are not going fast.

But now to the part most of us are excited about, how does the Accelero Hybrid III-140 affect the temperatures?!

Withouth workload our GPU was already very cool with about 30°C independent of fan speed. Not surprising as it does not have to do much on Windows Desktop.

After installing the hybrid cooler we could hardly believe our eyes. Even at minimum fan speed the GPU nearly stayed at ambient temperature. You won’t get it any cooler with water-cooling solutions. 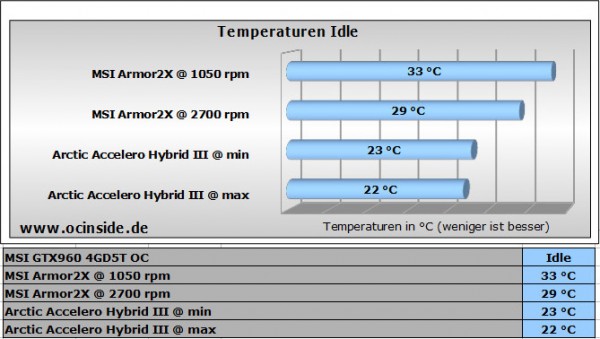 With the well-tried tool Furmark you can still get most recent video cards to their limit. When using the MSI cooler at minimum speed the GPU will throttle down because of reaching 80°C. At maximum fan speed the video card could operate permanently due to a maximum temperature of 66°C.

Now what about the hybrid cooler? Even at minimum fan speed this value can be reduced by 12°C. At maximum fan speed the video card can operate with 100% load and maximum power consumption at mild 44°C. 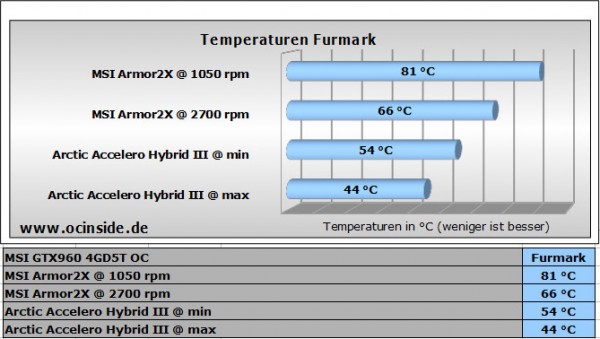 In the last paragraph we mentioned that the position of the radiator can influence of other compnents inside the case. We wanted to put this into numbers too. Because Furmark also uses some CPU processing, we also put the CPU under load with Prime95 to rule this factor out. For measuring we used the “system” sensor on our mainboard as a benchmark for the temperature in our case because it hardly changes under load.

The measured values clearly show that CPU as well as mainboard are influenced by the air heated by the Accelero Hybrid III-140 coming into the case. If you have a problem with this, you should place the radiator in a way that the air going through it will be blown directly outside the case. 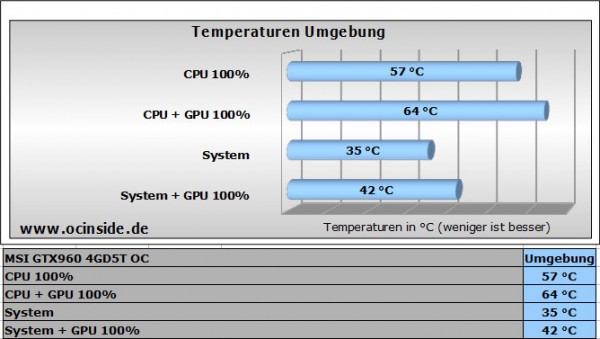