For measurement, the following tools were used: Prime95 and SpeedFan

The Cooler MasterAir G100M competes against the AMD boxed cooler. 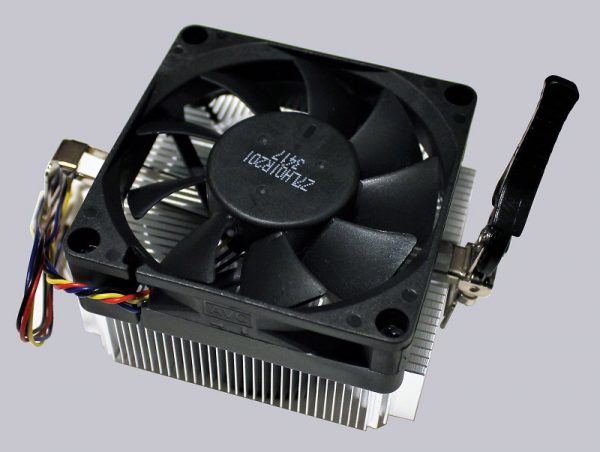 If you want, you can also join our recently published tests of the Cooler Master MA410P and the Arctic Freezer 12 that have been tested under the same conditions and compare their results.

The Cooler MasterAir G100M struggles hard against the AMD Boxed cooler. In the mid-speed range, it is just slightly superior to the AMD cooler, but in the upper speed range, it is narrowly beaten. We were so surprised by the results that we even completely uninstalled the G100M and reinstalled it to start a second test run, but were only able to confirm the measured results. 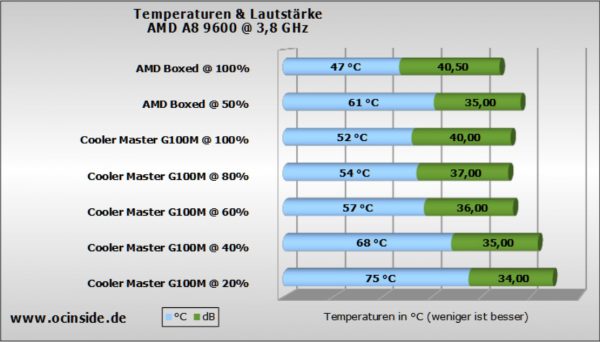 At less than 40% speed, the temperature also climbed above the 70°C mark, beyond which the overclocked A8-9600 APU clocks down autonomously.

The fan also gives a rather mixed impression. Up to 40% it is still passable for Silent Settings, 60% and 80% are already louder, but still OK. The jump to 100% is then a little bigger again. From about 60% you can also hear another noise, which can not be heard from a closed housing.

To be able to estimate the fan noise better, there is again a video: