Now we come to the most important part of the review, the highest stable performance. Due to the higher distribution of Intel LGA1151 systems we have decided a new DDR4 test system setup with an Intel Core i5-6600K CPU on an ASRock Z170 OC Formula motherboard, replacing our first Intel LGA 2011-3 system with Intel Core i7-5930K CPU on the ASRock X99 Extreme6 motherboard. While the modules are then addressed in dual channel mode, so but soon it can be compared also in pairs. The Intel Core i5-6600K CPU depending on the BCLK and RAM clock is set to different frequencies.

Microsoft Windows 7 Ultimate Edition is used as operating system. The stability is examined with the software Memtest86 and SiSoft Sandra Lite is used for all benchmarks, because it offers extensive adjustments and a fast result comparison. BTW. the latest SiSoftware Sandra version is available on our Server and can be downloaded there at high speed. The different benchmark tools are included even in the free Sandra Lite version.

First, the memory modules are tested with the SPD values at default BCLK, whereby the values are programmed to the SPD IC by the manufacturer and read out from the motherboard. At default BLCK, the timings with the auto settings from the SPD EEPROM were set to 16-16-16-39 2T (CAS-TRCD-TRP-TRAS). 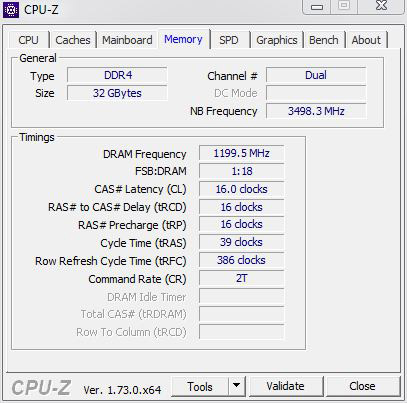 Here is the result of the SiSoftware Sandra benchmark tests:

The “Memory Bus Range” is by the way no benchmark value, but this value is quite simple to calculate by the frequency and is used only to compare the benchmarks.

This standard SPD clocking at the standard DDR4 voltage is compared with three other settings:

Then, the memory modules are tested with XMP values, whereby the XMP values are programmed to the XMP profile IC by the manufacturer and can be read out from the motherboard. The timings from the XMP EEPROM were set to DDR4-2666 16-17-17-36 2T (CAS-TRCD-TRP-TRAS). 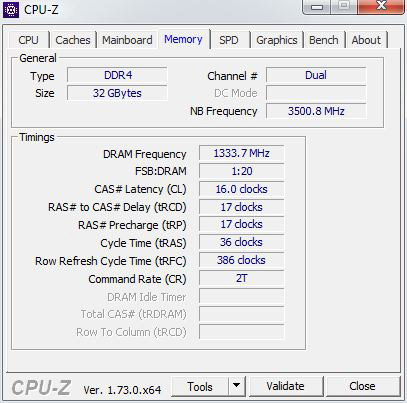 Here is the result of the SiSoftware Sandra benchmark tests:

There we see already very good the significantly better results of the higher speed.

Now, the maximum possible frequency of the memory modules is determined at default 1.20 Volt. The memory clock with a fixed memory timing of 15-15-15-36 2T and 1.20V is increased in small steps while the detailed Memtest86 test still runs without an error. The long trial period ensures that this frequency of the modules is working really stable. 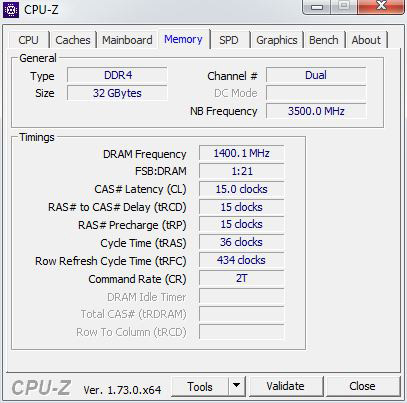 Then the highest possible frequency is determined at 15-15-15-36 2T with the maximum permitted manufacturer voltage, which is however for these modules identical with the default voltage of 1.20 volts. Since overclocking is already outside the specifications, we decided for an OC voltage of 1.35 volts, to overclock the memory at least slightly higher.

With an increased memory voltage of 1.35 Volt the DDR4 memory modules at 15-15-15-36 2T timings could be overclocked to 1450.3 MHz, which corresponds to approximately DDR4-2900. Officially the company Crucial specifies the default DDR4 1.20 volts, without loosing the warranty ! 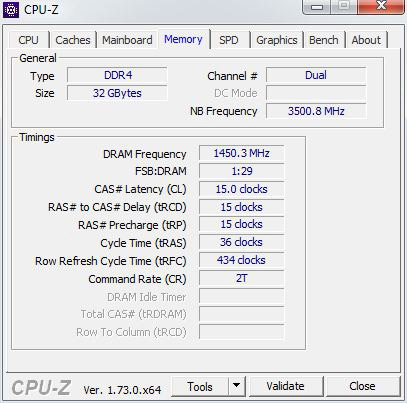 With higher voltages or with lower timings significantly higher frequencies can be achieved because the frequencies and timings depends directly from each other.

Here, our OC results are shown in a chart: 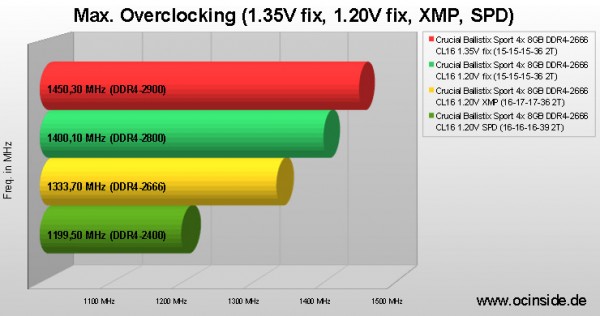 And here is a direct comparison of the OC values with the previously tested DDR4 modules. The officially permitted voltage of 1.20 volts was chosen as basis for this chart. 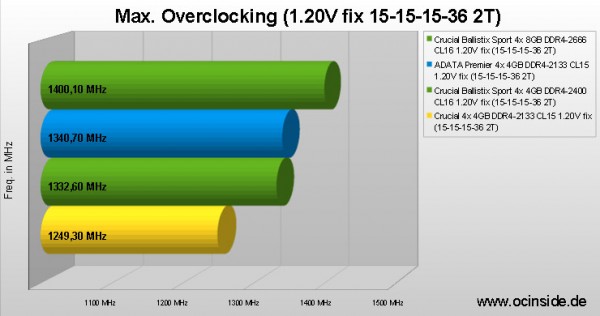