We would like to explicitly describe the most important functions of the EaseUS Todo backup software once again. 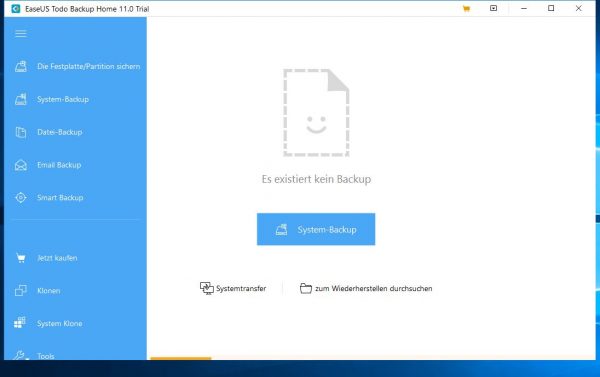 Disk/Partition backup
With the software it’s possible to backup single partitions as well as complete hard disks. This is especially important if you are dealing with a multi-boot system from which you only want to backup one operating system, for example.

File Backup
An explicit backup of individual files is possible. This can be useful for large database files without having to backup the entire partition.

Incremental/Differential backup
Sometimes it is sufficient to backup only the files that have been added or changed to a data pool. The tool also offers this function.

Schedule Backup
You have hardly any time to perform a backup in daily operation? With this function, scheduled backups can also be performed at night.

System Backup
As the name suggests, an executable backup of the entire operating system can be created here. All necessary system partitions can be backed up by the tool.

Image-reserve Strategy
The backup drive is bursting at the seams? With this strategy the user can determine if, when and which backups are deleted to make room for new backups.

WinPE emergency disk
The most important function in our eyes is the startup medium that can be generated, including the Windows PE operating system. It is a lightweight operating system which is equipped with the necessary drivers and the Todo backup software. If the system is no longer able to boot due to any problems, you can boot with this boot medium and restore an executable backup.

Pre-OS Installation
In addition to the WinPE emergency disk there is the possibility to switch a boot partition in front of the current operating system. If it does not start, you can also use this boot partition to restore backups. But beware! A WinPE disk should be created anyway, because the pre-OS installation does not work of course with defective hard disks or SSDs.

Windows right klick backup menu
The Todo Backup Tool offers an integrated menu structure for Windows, with which one can create backups from the file management.

Outlook Backup
Sometimes you also want to store important e-mails over a longer period of time. In addition to the built-in export function of Outlook, Todo Backup is also able to save and restore these messages. Unfortunately, Windows live mail and Mozilla Thunderbird are not supported at this time.

Email notification pre/post-command
Sitting in the cinema during the backup? No problem. Todo Backup informs about its status at the start and finish of the backup. Sometimes this is more important than any status update on Facebook. 😉

File exclusion
You don’t necessarily have to keep everything. Files with extensions such as “*.tmp” or “*.bak” do not always have to be backed up. These formats can be omitted here.

Cloud Backup
No TB hard drive at hand? No problem. Here you can also specify Cloud storage space as the backup destination. This describes the range of functions of the EaseUS Todo Backup Home 11 software. Let’s get down to installation and commissioning.