The RAID installation is essentially quite simple:
– first attach both SSD drives at a RAID capable controller e.g. on the motherboard.
– then enable the RAID controller in the BIOS or by a Jumper (pay attention to additional references in the manual) and change the SATA controller in the BIOS from IDE or AHCI to RAID.
– at the next start enter now the RAID BIOS with the explained key combination (ASRock e.g. CTRL+F).
– there activate the desired RAID assignment.

Here is a screenshot of the RAID BIOS ROM, where both 64 GB SSD drives are combined with RAID0 into one 128 GB SSD logical drive, in order to achieve a higher performance: 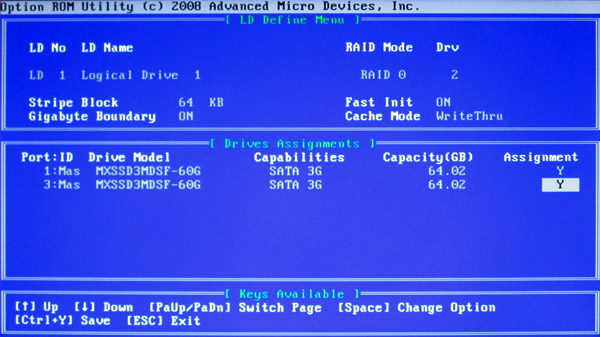 After creating the RAID array we restart the PC and see now the new logical drive assembly, to which we assigned the LD name ocinside, which we can partition and format now in the Windows like a conventional drive.