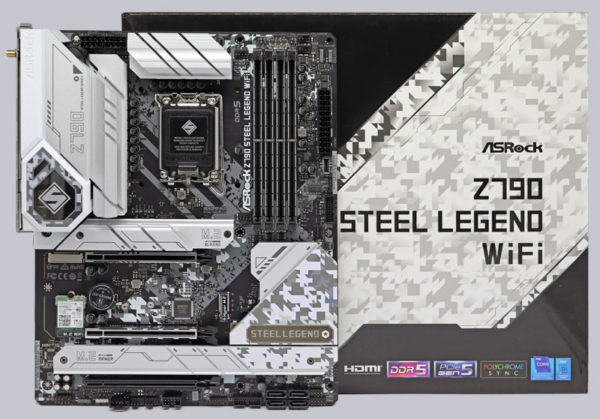 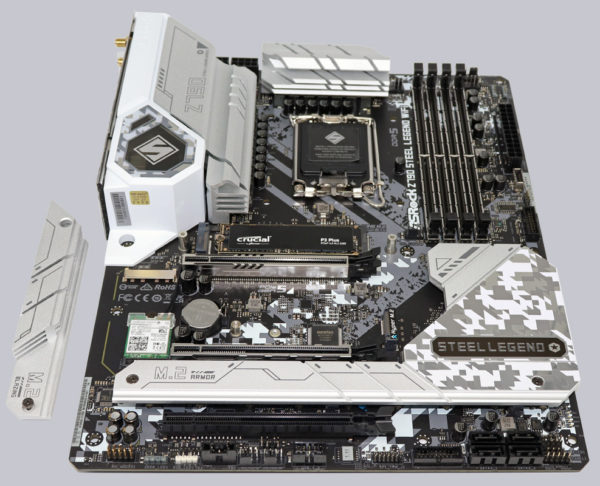 With the ASRock Blazing M.2 socket, PCIe Gen5 x4 modules with up to 128 Gb/s connectivity are supported.

As soon as the chipset cooler including the M.2 cooler is removed, another special feature is immediately noticeable and that is the SMD RGB LEDs that are placed underneath the cooler. This brings us to the RGB lighting of the ASRock Steel Legend motherboard.

Note: Speaking of LEDs, there is no 7-segment Dr. Debug post code display on this mainboard, but at least the four LEDs that serve as status indicators (PSC – Post Status Checker). These PSC LEDs light up one after the other after the PC is switched on and if one LED stays on continuously, the fault is probably there. 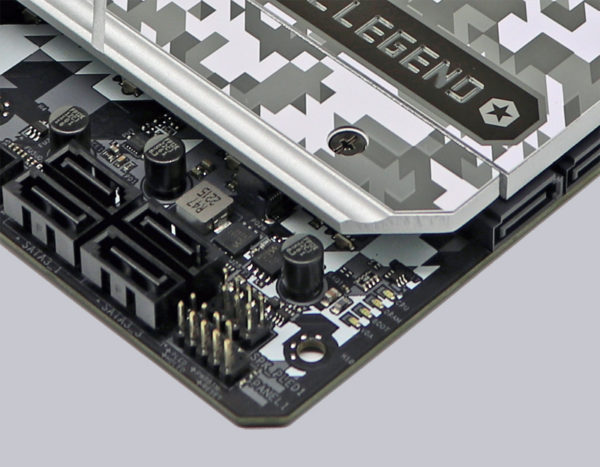 RGB lighting has already become a selling point for many and here ASRock has done something again. You can connect conventional 5050 RGB strips to the white 4-pin 12V RGB header as usual, for example to light up the case. Additionally, there is a gray Polychrome RGB connector, which supports individually addressable LEDs on addressable RGB strips via the WS2812B. There are also two aRGB headers in the upper corner near the CPU cooler connector.

Since addressable RGB LEDs are already attached to the chipset cooler, the I/O panel and underneath the large M.2 cooler, there is already an effective lighting of the motherboard after the first power-on. 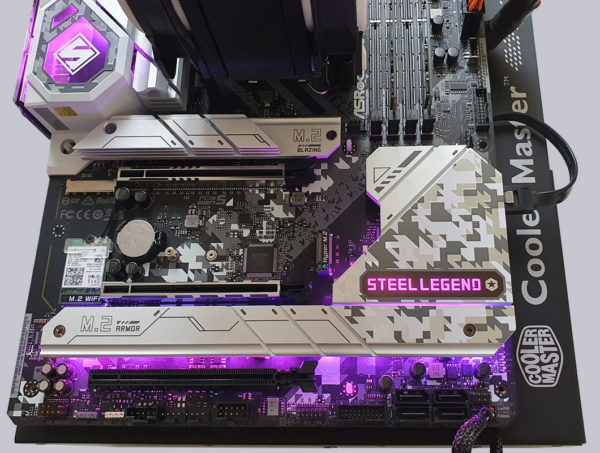 To get a small impression of the very special ASRock Z790 Steel Legend WiFi effects, here you can see the addressable RGB LEDs (ARGB means each LED is individually controllable) on the I/O panel.

And in this animation you can see very nicely the aRGB LEDs in the Steel Legend lettering of the chipset cooler.

The RGB headers and the integrated RGB LEDs are controlled via UEFI or the included ASRock Polychrome RGB LED software. There, you can select the colors in an RGB color selector and set whether the RGB headers should be controlled separately or together with the RGB lighting on the chipset cooler, the I/O panel and the lettering. Of course, you can also deactivate the lighting completely. 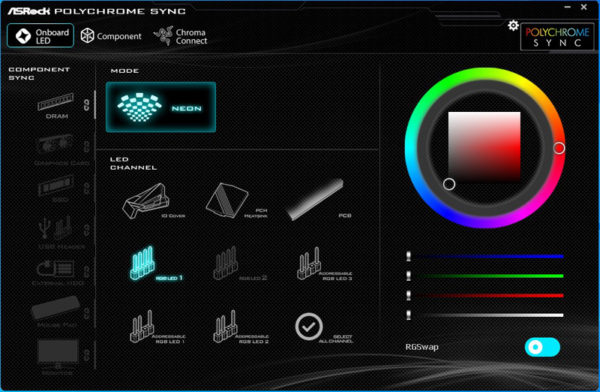 You can select many effects in the ASRock RGB LED menu, for example if the LEDs should light up continuously, breathe, randomly or be controlled to music and with the addressable RGB connector you even get completely new RGB features such as Spring, Meteor, Stack, Cram, Rainbow, etc. 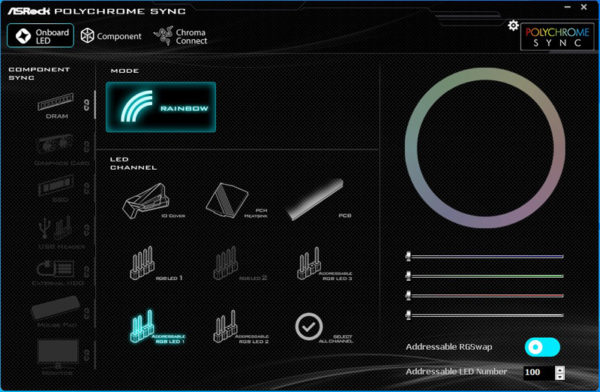 Especially effects, such as Rainbow naturally stand out. 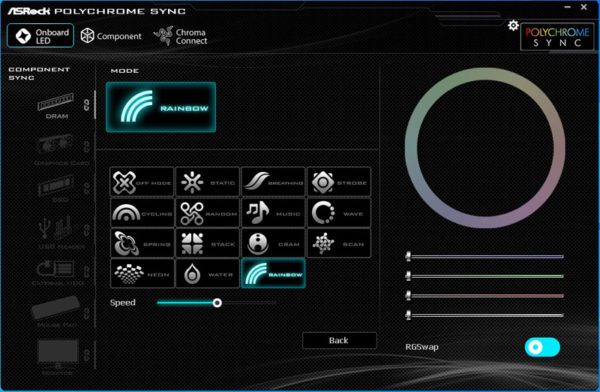 But also other RGB components can be controlled, if they are supported by the software. 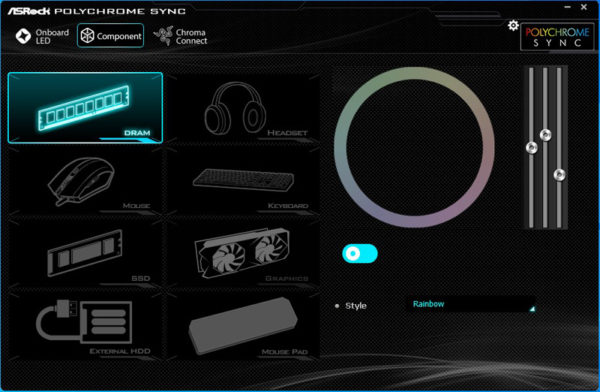 As before, up to 100 addressable LEDs can be addressed individually.

There are lots of great RGB effects that we’ve featured in a ASRock Polychrome RGB software video on our OCinside YouTube channel.
Note: Please allow our cookies first to see this content!

Here you can see the two additional aRGB connections on the right, one of the two internal USB3.2 Gen1 headers as well as the USB3.2 Gen2x2 Type-C front panel connector on the left and the 24-pin ATX power connector in the middle.

This brings us to the mainboard power supply. The picture shows the side view of the motherboard with the two heatsinks on the Smart Power Stage MOSFETs.

To take a look at the PLC, we have disassembled the two aluminum heatsinks that were pressed onto the voltage converters along with the thermal pad. You can also see the I/O panel cover with the integrated aRGB lighting. 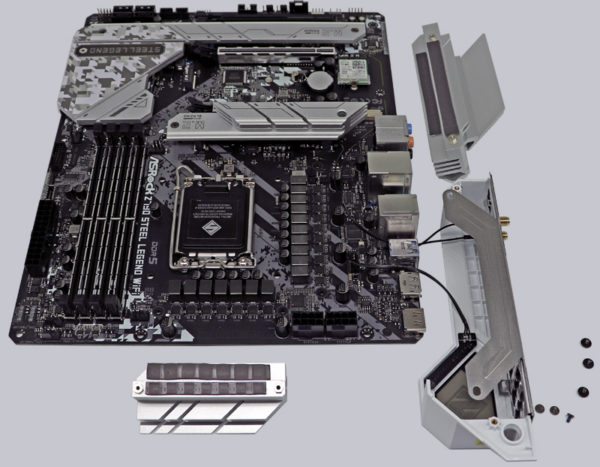 The voltage converter section has a classic design, with the ASRock Z790 Steel Legend VRM being made up of 16+1+1 phases. 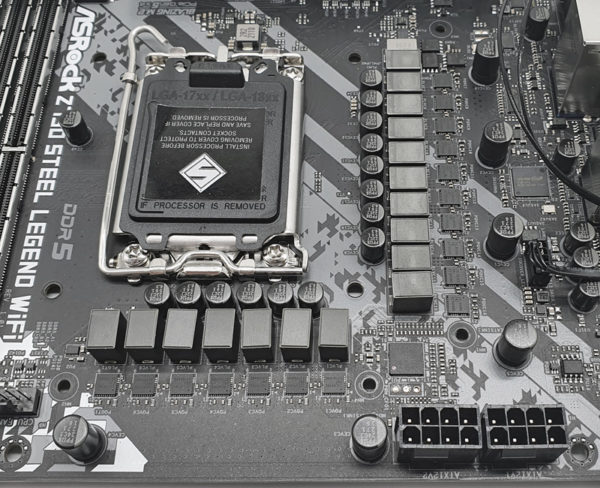 Here you can see the SPS Power Stage with the ISL99360, which is responsible for the power supply of the Intel Raptor Lake and Alder Lake processors on the Intel LGA 1700 socket.

The ASRock Z790 Steel Legend WiFi board can be equipped with up to four DDR5 modules and is upgradeable up to a maximum of 128 GB RAM depending on the operating system used (see list). Here you can see a picture of the four DDR5 memory slots with dual channel support. 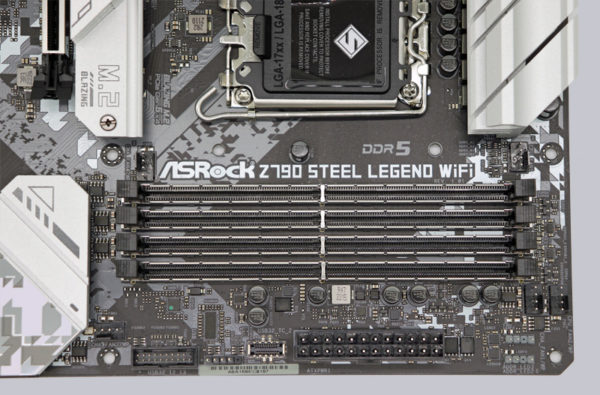 The Intel LGA 1700 motherboard supports DDR5 memory and can be optimized for DDR5-2933 Quad Channel modules in the BIOS depending on the CPU.

Thanks to XMP 3.0 support (Extreme Memory Profile), XMP memories are set correctly with a mouse click in the UEFI, but more about that later. The exact RAM modules that are officially supported should be read on ASRock’s memory support page before buying.

The ASRock Z790 Steel Legend WiFi offers a total of eight SATA3 ports, with four angled and four straight out. The angled SATA3 connection under the chipset cooler can be very helpful when routing the SATA cables to the rear of the case. 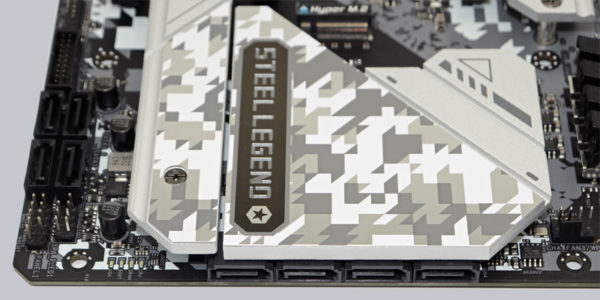 The Intel Z790 chipset supports RAID. The drivers for Windows 10 and Windows 11 are currently available for download on the ASRock support page.

The ASRock Z790 Steel Legend WiFi motherboard features the better Realtek ALC897 audio codec, which supports 7.1 surround sound and outputs it analog via 5x 3.5mm jacks on the ATX panel or via the internal front panel audio connector, for example. Furthermore, there is an optical SPDIF digital output and premium Blu-Ray support as well as Nahimic audio software. Thus, an additional sound card with digital outputs is unnecessary for most users. 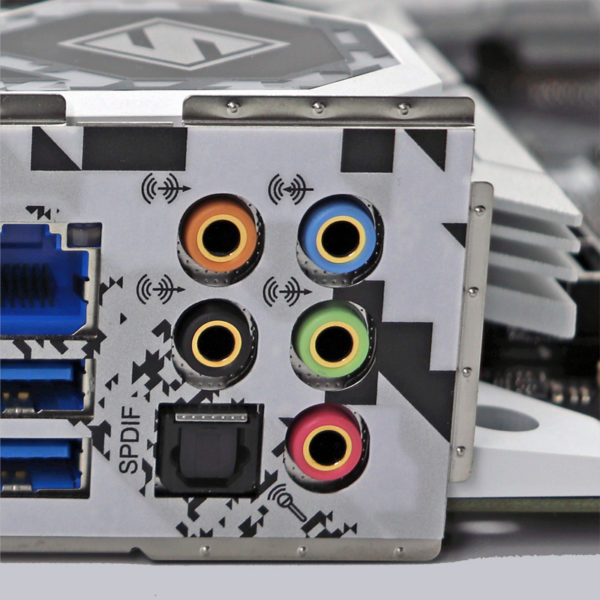 Let’s now move on to the Intel LGA 1700 CPU socket. Intel has made many changes with the Socket 1700, as it is significantly larger than its mainstream predecessors, with a whopping 1700 pins. While the new 12th/13th Gen LGA1700 socket looks similar to the LGA1200 socket of previous generations, they are not compatible with each other! So a new Intel Raptor Lake or Intel Alder Lake processor, or similar, must be installed for it to work on the Intel Z790 motherboard. 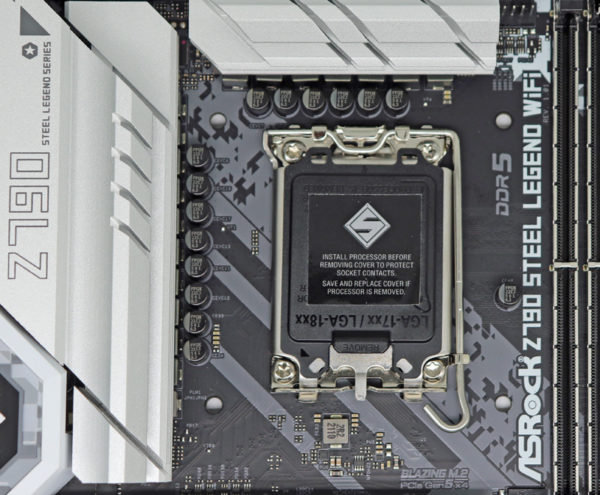 The hole spacing for the CPU cooler has also been adjusted, so older CPU coolers are not compatible without an adapter kit or a little handicraft work. Fortunately, many cooler manufacturers have reacted and offer LGA1700 cooler mounting kits for upgrading, as you can see here with the Arctic Freezer II Intel LGA1700 Upgrade Kit and the Arctic Freezer 34 Intel LGA1700 Cooler Upgrade Kit. 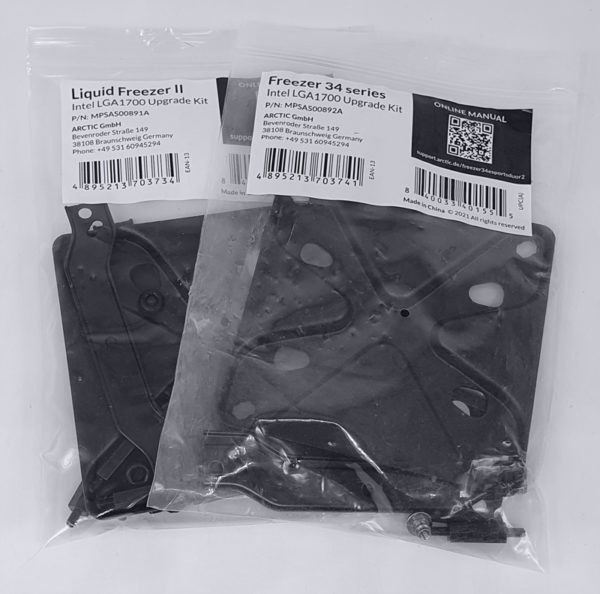 The socket has been equipped with a lever that presses the relatively small CPU evenly onto the pins in the socket. As always, do not touch or even bend the contacts in the socket during installation and be sure to install the protective cap on the socket during storage or transportation. If pins are bent and the motherboard stops running, we can help with advice and support in the Intel Forum. How to install and remove the CPU correctly from the socket is shown in this AMD or Intel CPU installation guide and in the following video on our OCinside YouTube Channel.
Note: Please allow our cookies first to see this content!

We equipped the test system with a 12th generation Intel Core i7-12700K CPU. 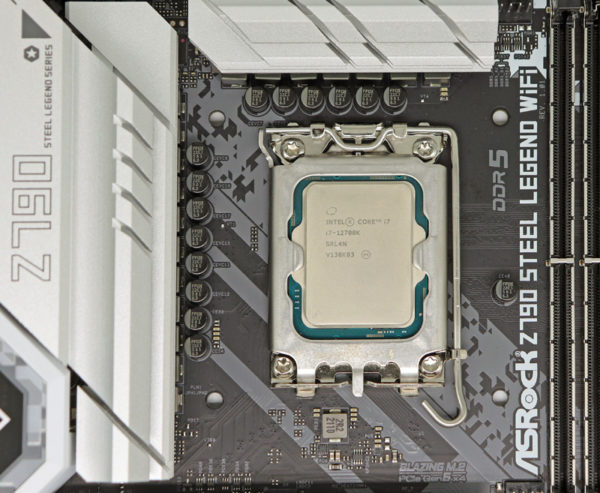 The memory controller of the Intel LGA 1700 CPUs currently only supports the Dual Channel mode. Thus, the two memories are used on the Intel Z790 motherboard to get the DDR5 Dual Channel support. 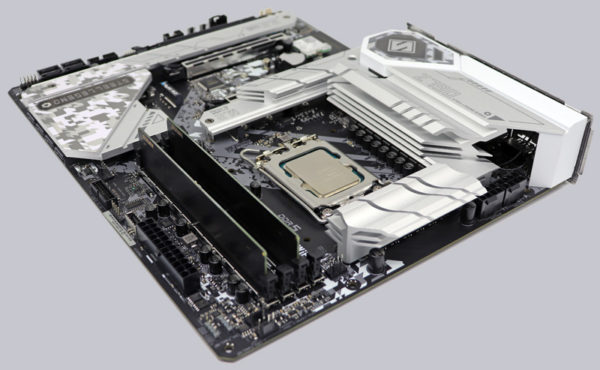 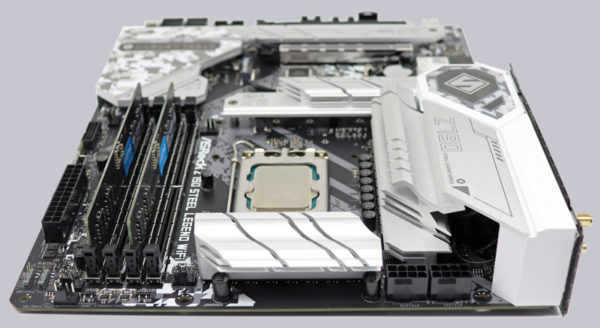 A special feature of DDR5, in contrast to DDR4, is that DDR5 memory supports on-die ECC. But what is actually on-die ECC? With ECC, an additional ECC chip was always required on the memory module for error correction and the processor then had to communicate with this ECC chip in order to correct any errors. With DDR5, an error correcting code is virtually integrated on the memory module itself through on-die ECC, which saves the checksum during the write process and compares it again during the read process before the data leaves the memory module. But unlike with registered or ECC unbuffered modules, there is no exchange with the CPU and therefore no transfer errors to the CPU are detected or corrected, but the ECC communication only takes place on the module itself (therefore also on-die ECC). So there are still special DDR5 ECC modules for servers and even in the desktop PC area, for example, ECC DDR5 modules can also be used in a workstation with LGA1700 processors with Intel W680 motherboards or Intel W790 motherboards.

But PMIC (Power Management Integrate Circuit) is also new. PMIC is a separate chip on the DDR5 RAM that is responsible for the voltage supply. By the way, this PMIC was also a reason for the poor availability at the beginning of the DDR5 modules.

For testing with the latest Intel LGA 1700 processors, we use an Arctic Freezer 34 eSports Duo air cooler along with Arctic MX-4 thermal paste and an Icy Dock MB171SP-B Turbo Swap removable frame for quick swapping of the HDD or SSD, in our case a Crucial MX SATA SSD. 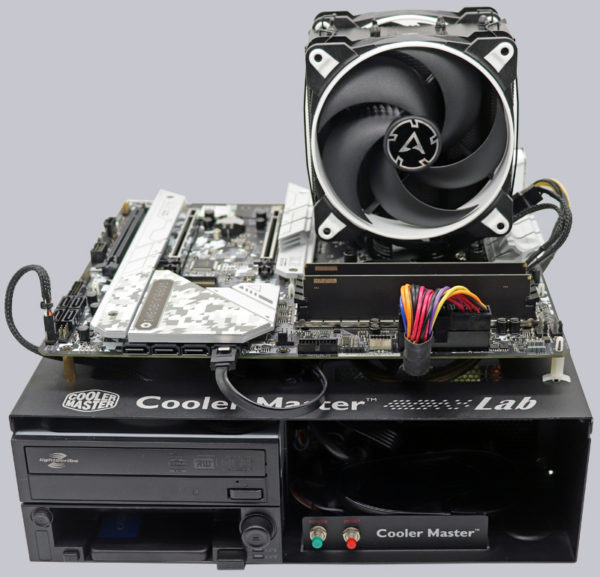 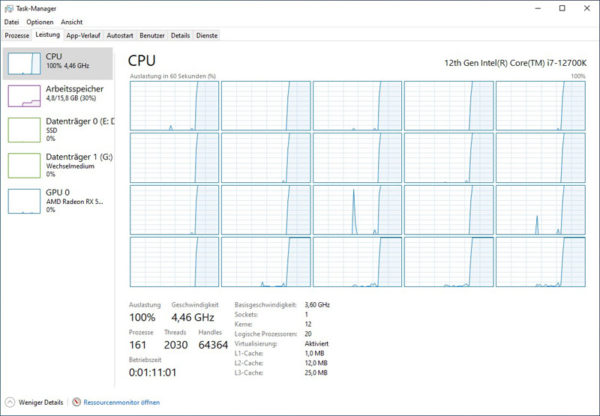 As you can see in the thermal image of the ASRock Z790 Steel Legend WiFi PC under Prime95 load, the heat from the voltage regulators and coils is dissipated well. Overall, we still recommend good air circulation inside the case so that the heat of the heatsinks is safely dissipated. 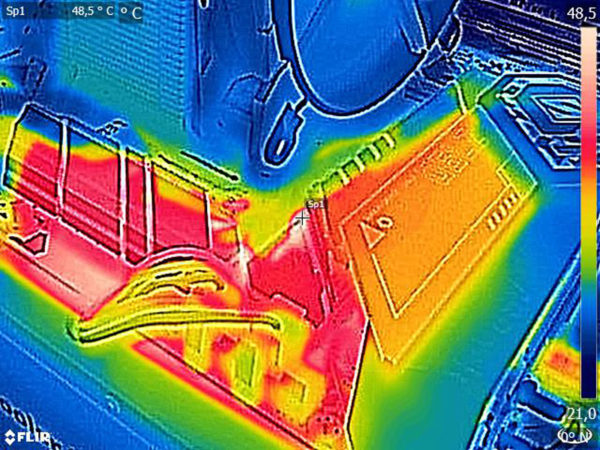