After unpacking the card rewards us with an impressive appearance. Observe the sticker, which must be removed before operation.

As described above, the card has three large fans of which the outer two models have a diameter of 10 cm, and the middle fan has a diameter of 9 cm. 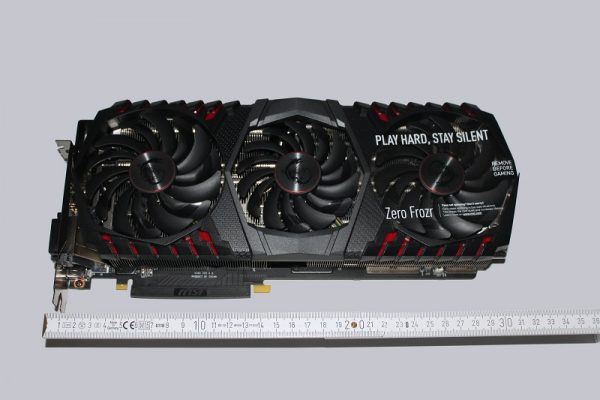 The fans are not standard models. We’re talking about Torx 2.0 dual-ball bearing fans that provide quieter and more effective cooling through their dispersion cooler blades. 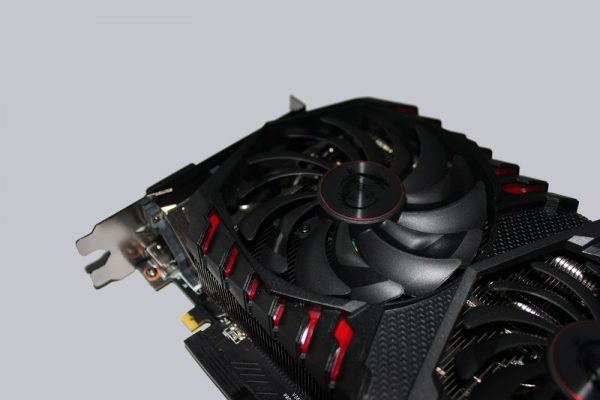 The heat sink is also impressive. It is criss-crossed by a total of six heatpipes, which cools the installed NVidia Pascal CPU down to the required amount and possibly beyond.

However, the cooler has some more highlights. The red plastic inserts suggest that the cooler is not completely unlit. But more about this later. In addition to the usual PCIe 3.0 16x interface, the 1080ti also has SLI connectors at the usual place.

Further connection options are located on the front of the board. There are two display ports, two HDMI ports and one DVI-D port. This should give every “modern” user the possibility to connect all his monitors. If you like to have something older, we can recommend the recently tested Aukey CB-C55 Multiport USB-C Hub which has a VGA port. 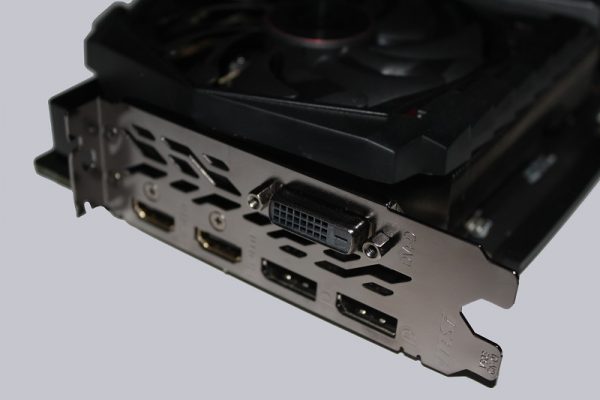 Let’s take a look at the back of the graphics card. 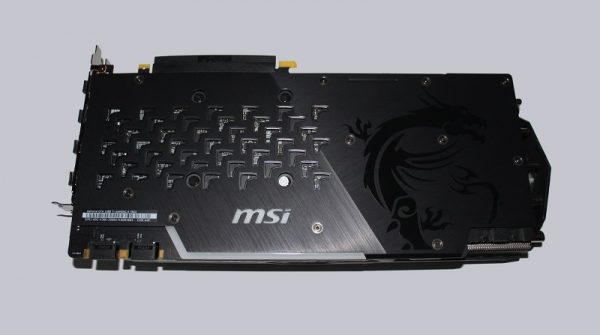 Here we see the interesting designed backplate with the laser cutouts and the MSI dragon. The white bow and the MSI lettering also offer an interesting function, which we would like to discuss in more detail in the practical test. Although the backplate does not have any cooling properties in this case due to the lack of support on the PCB, it has a certain amount of airflow through the ventilation holes, which should at least supply the components with fresh air.

As you can see in this picture, the cooler is a little bit longer than the PCB. Given the enormous length of this card, however, this plays a minor role. 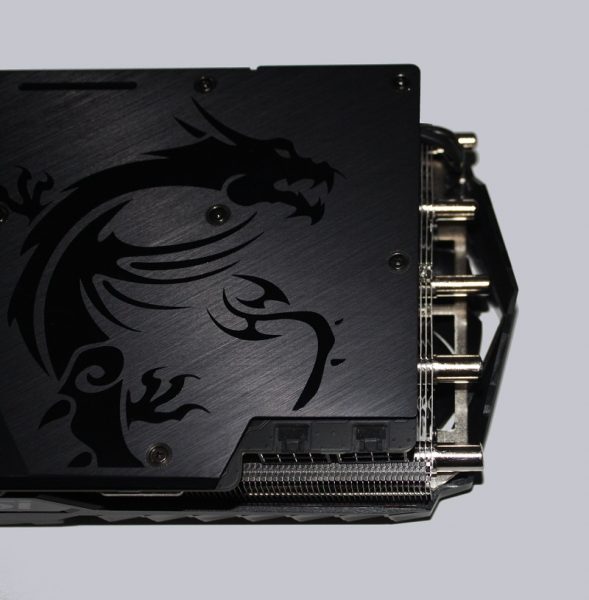 A glance at the side shows not only the dimensions of the 2.5 slot cooler, but also the two 8-pin PCIe power connectors, which the card urgently needs for its enormous performance. 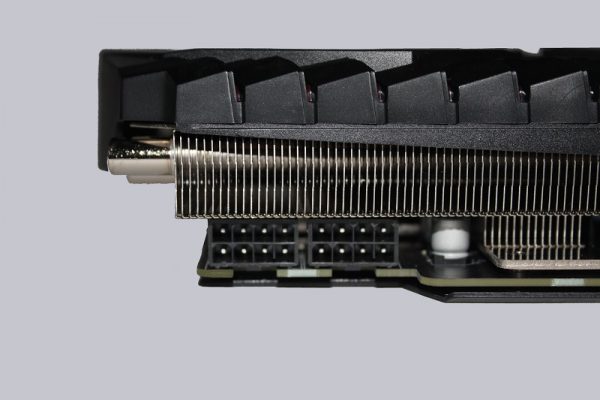 That would have brought us to the end of our little hardware tour. But the MSI GeForce GTX 1080ti Gaming X Trio has even more to offer. Namely the …

The supplied CD will be left aside and downloaded directly from the manufacturer’s website. We offer the MSI Afterburner 4.4.2, Mystic Light 2.0.0.0.36 and the MSI Gaming App 6.2.0.49. The MSI Afterburner is already known to experienced users, as it can not only be used for MSI graphics cards.

After installation, the app rewards us with a complete overview of the vital signs of the graphics card. 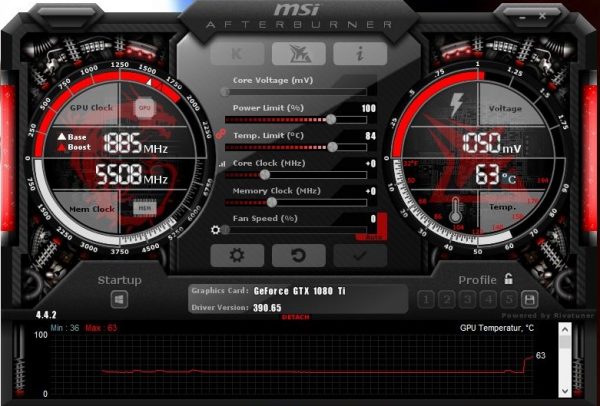 Both overclocking and monitoring are possible with this software without any problems. But we would like to focus on another screenshot. Here it is easy to see that Nvidia has got the 144hz bug under control. It was about time! But wait a minute? You don’t know the 144 Hz bug? No problem! This is an error that prevents the graphics card from clocking itself into idle mode if at least two monitors are connected, one of which has a 144 Hz refresh rate. Until now, the solution was to clock the monitor down to 120 Hz. So we are all the more pleased that since the release of these devices, Nvidia has finally eradicated this annoying bug. 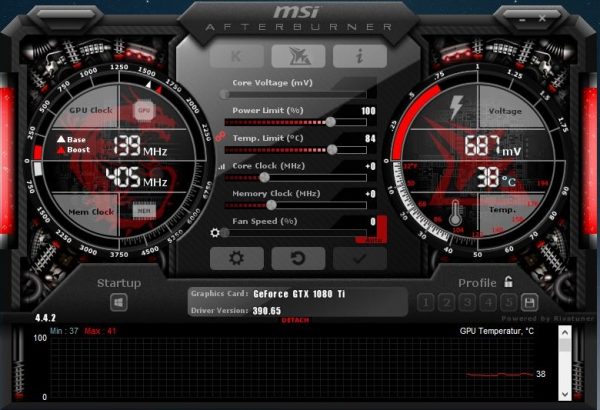 The Mystic Light software allows us to select the illumination of the graphics card. If you own other MSI RGB devices, the software offers a central point of contact to match all these components in terms of colour and effect. 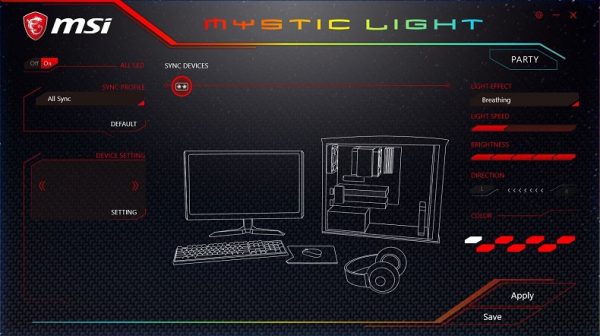 The last software we would like to introduce here is the MSI Gaming App. For many people, the app is probably already know from our MSI GTX 1080 Gaming X+ graphics card review. 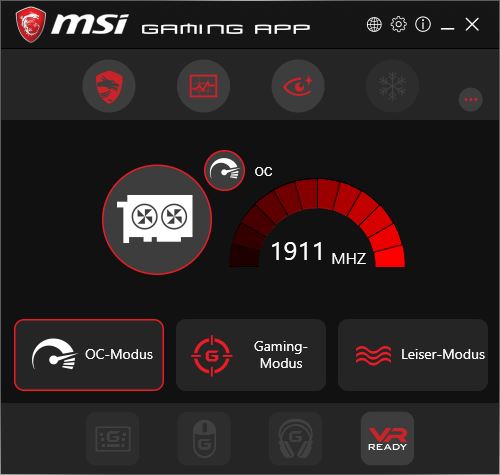 Using this software, we can not only select the different overclocking modes, but also activate various OnScreen displays to keep track of the game. Last but not least, we also have the possibility to project video overlay into the games and so our favorite gaming stream or follow our OCinside YouTube Channel. 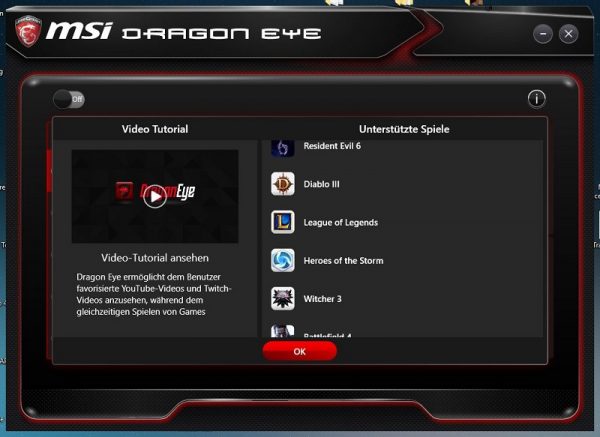 But now we want to turn our words into deeds. Let’s get to our practical test.