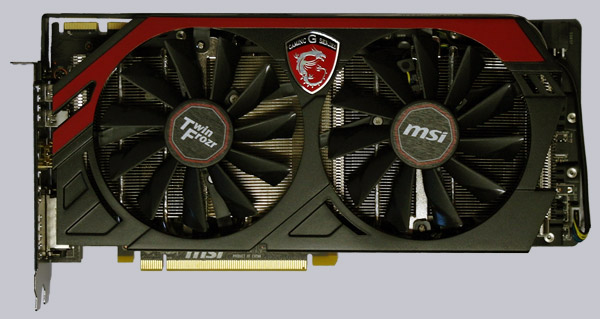 Here is the backside of the graphics card. 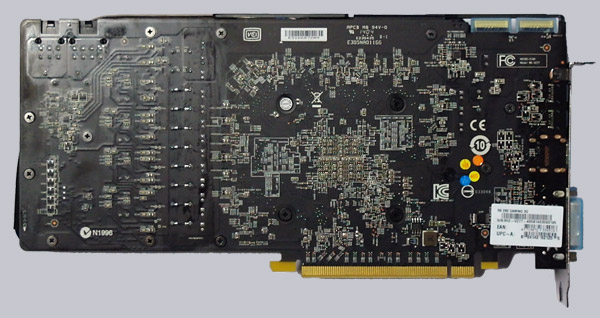 The 2 slot cooler is equipped with a heat pipe system, whereby a total of 5 heatpipes spread the heat from the CPU over the entire cooler.

Mounted on the cooler are the two 100 mm fans which provide the necessary fresh air and cool next to the heatsink even memory chips and voltage regulators on the PCB. 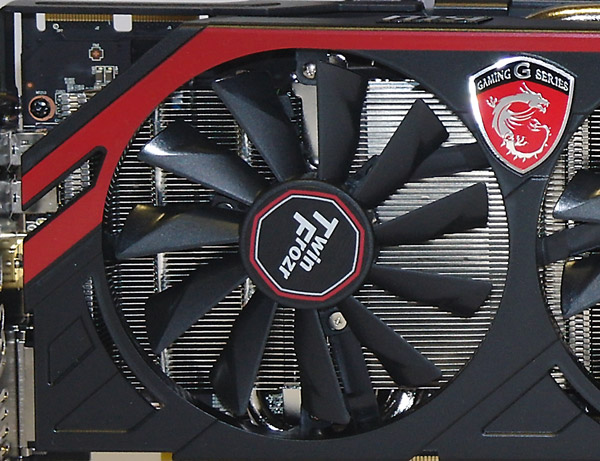 At the top are directly a few more specifics of the graphics card.

A 6-pin and an 8-pin power connector (that can be connected by the way also with the 6-pin to 8-pin adapter) is located at the rear top of the graphics card. In any case, both power connections must be connected with the power supply. By the way at least a 500 Watt power supply is recommended by the manufacturer and in our tests we have achieved a total maximum PC power consumption of up to 330,2 Watt with an AMD A10-7850 K APU. 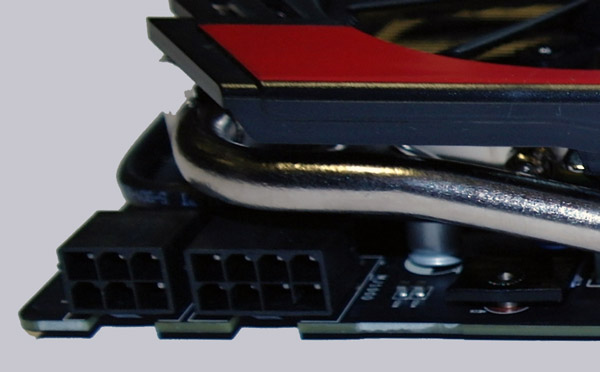 Another feature is the so-called MSI Hybrid BIOS. The hybrid BIOS is a second BIOS that can be selected via a small switch near the CrossFire contacts. With the BIOS switch you can activate either the traditional legacy BIOS on position 1, to achieve a maximum compatibility or position 2 for the full UEFI BIOS support, to enable the shorter start time of the PC and the wake-up time from the hibernation, if the mainboard supports the UEFI mode and the UEFI mode is also enabled in the motherboard BIOS.

The MSI Twin Frozr Gaming Radeon R9 280 OC Edition graphics card has four display connections at the slot bracket – a DL DVI-I port, a HDMI 1.4A port and two mini DisplayPorts, which one can be used via the supplied adapter directly as DisplayPort. 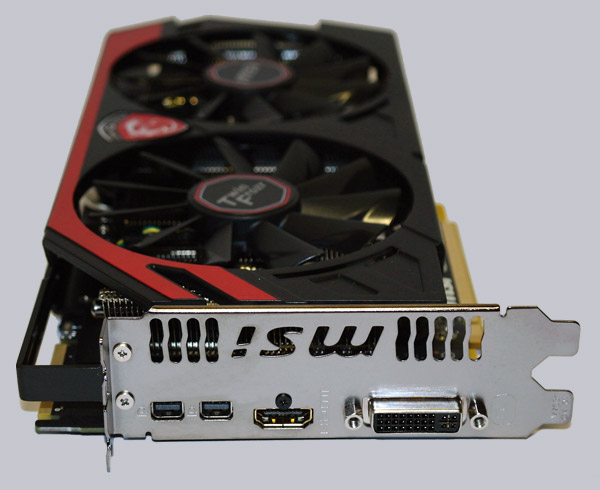 The rear side of the graphics card is not quite as spectacular, but you can see the fan connector and on the other hand the heatsink with heatpipe can be seen. 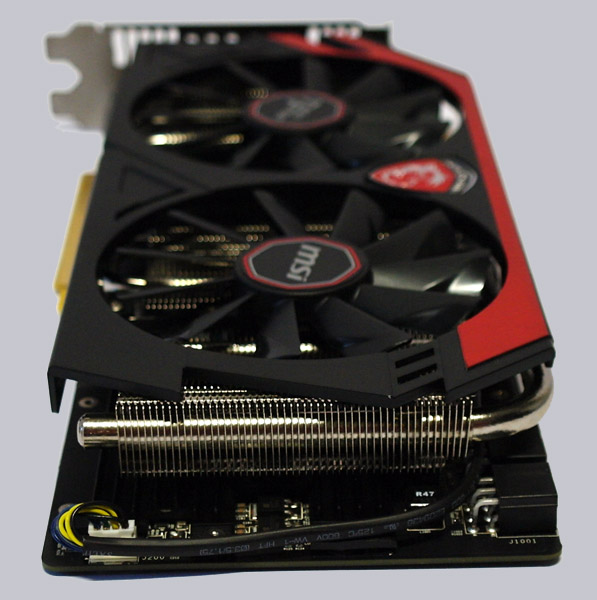 To stay up to date, the video card is supplied with the MSI Live Update 5 software. On the home page, you will be notified on the operating system, the motherboard, the geflashte BIOS or UEFI version, the graphics card and the graphics cards firmware. 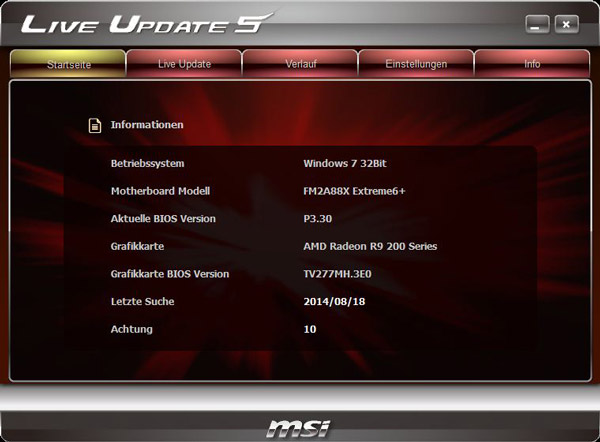 On the Live Update page you will see after a short Internet connection, which drivers and tools are installed and which one can be installed. Take the information with a pinch of salt, because you do not necessarily want to install everything and in some cases, the older versions are found. MSI Live Update 6 by the way displayed an error message “an invalid argument was encountered”, therefore in the test we had to stay at the supplied MSI Live Update 5 version. 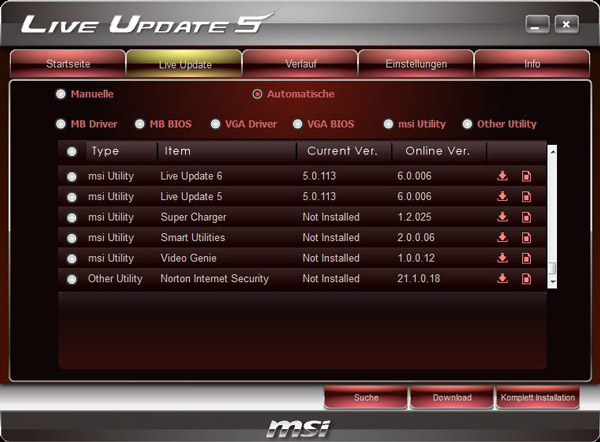 Like the MSI Twin Frozr Gaming GeForce GTX 780 Ti, this card is also supplied with the Tweak and Monitoring Tool MSI Afterburner (see OC Download page). With this program, you can adjust the graphics card from top to bottom and calibrate it. It is also possible over the settings button to show the readings either in the taskbar or on an external LCD. 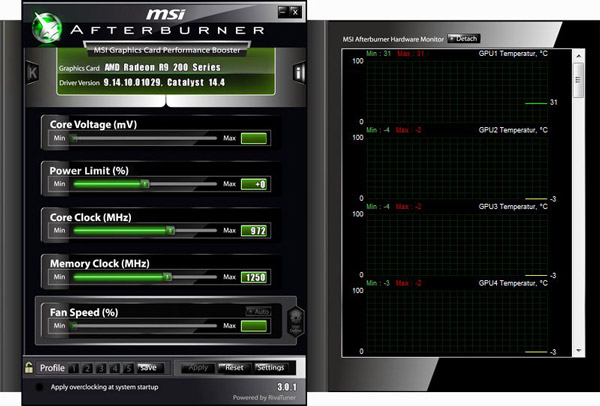 Another small tool, which is included and available for download, allows even inexperienced overclockers to increase the video card performance. This is the MSI Gaming App, which is capable of changing the GPU clock frequency, and adjust the fan speed in 3 steps to the respective requirements. 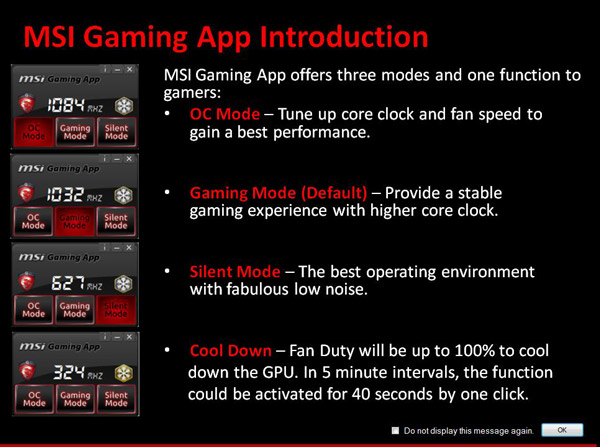 Available are the Silent Mode … 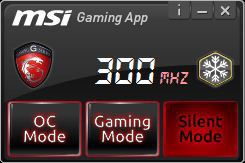 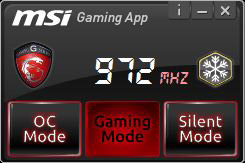 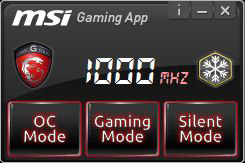 Additionally, the tool has another feature by pressing the small ice crystal symbol, to speed up the fan for 1 minute at maximum speed (2900 rpm) to cool down the graphic card as quickly as possible.

If and how far the video card is really overcloed, can be checked for example with the free available tool GPU-Z, which can read out a lot of information and the clock speeds of the graphics card. 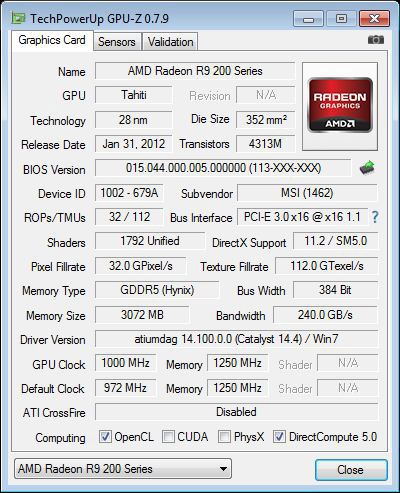 Let’s come to the most interesting part of this test: The benchmarks, sound and power consumption !