We will now look at the actual headset and its design. Already striking was the color scheme for the Headset Sennheiser has decided. The headband, which surrounds the wide suedeplush stripe, decorated entirely in black …

… and the two earphones in shiny white. 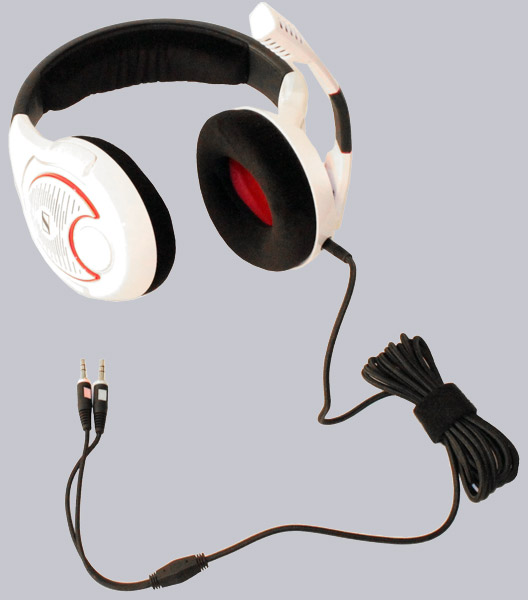 Red chrome frame indicate that the headset is not a normal “everyday” type. On the left side there is the arm that includes the microphone, and mute switch. 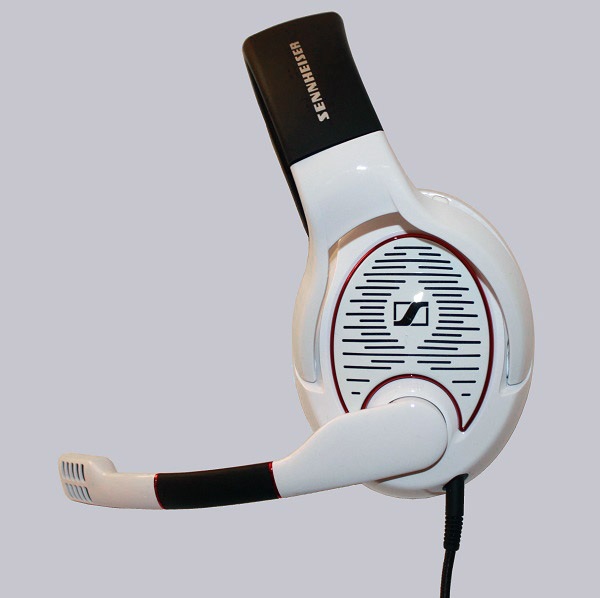 The center of the swivel arm is flexible, can be brought into the desired position, and remains there also. 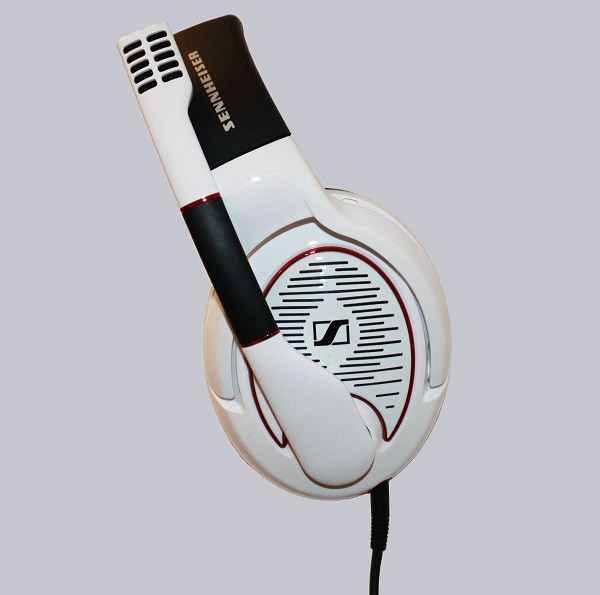 Also mounted on the left side, there is the cable, which is protected by a large spout against buckling. 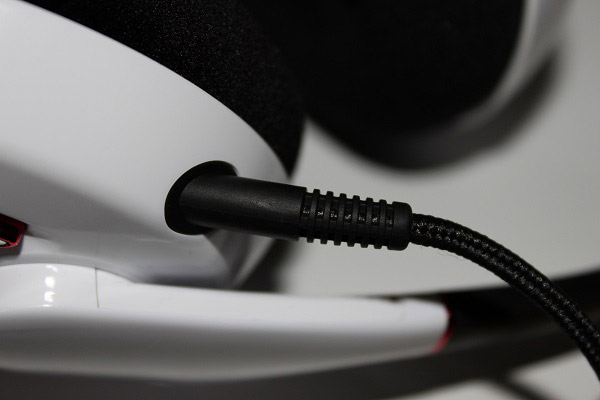 The cable is 3 meters long, which is very pleasent, and it has two color-coded jacks at the end. The special feature of the cable insulation is the material that gives the cable a lower friction. It prevents the cable being jammed behind every corner.

On the right side is the volume control, which can provide feedback through a small depression on the button where it is currently located on the scale.

This control is not able to completely turn off the sound transmission. So the audio signal remains even on the lowest setting – although quiet, but audible on the speakers. Thanks to the open construction it is possible despite these remaining low setting to perceive ambient noises. There are both sides of the story about the placement of the knob. On the one side, it might be a problem for right handed gamer who do not want to take the hand off the mouse to readjust the volume. For others it is perfectly in turn, as they prefer to use the WASD keys with the left hand. The fact is that the volume control right on the headphones is more pleasant than the cable version, which often is tilted behind chair backs or desks. 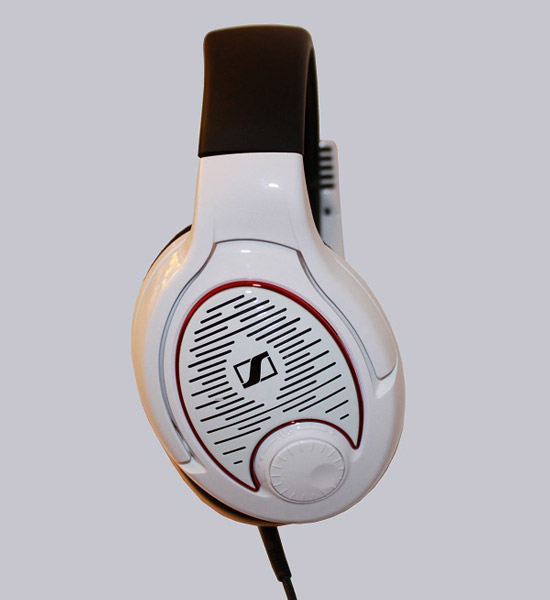 Further favored by the great flexibility the headset is very pleasent to wear. Even for large heads the headset, thanks to the wide extension range, is well suited. And the large XXL ear pads can also completely enclose large ears. 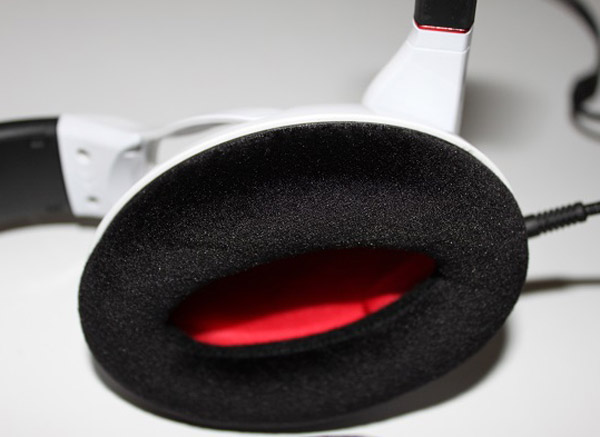 Another positive point is about the earpads. Not only that these consist of suedeplush rather than the usual foam, they are even interchangeable. 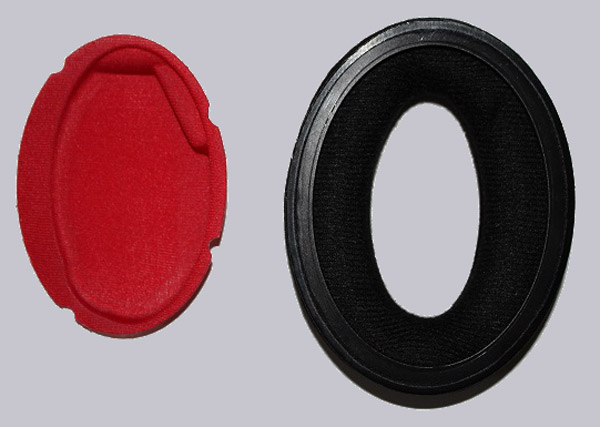 You just lever the ear pads out with a small screwdriver between the ear cushion and housing.

Since this is only clipped with a circumferential rail, it should not cause any major problems. If the pad so after long, fierce battles be worn once, there is this exchange cushion available at Sennheiser under the name HZP26 (currently for the price of 24.75 EUR). In this context, one can also order another useful addon. The adapter PCV05, which brings together both jack (speaker and microphone) on a single jack. This is required, for example, for the Apple MacBook or various gaming consoles, with only one combo connector. 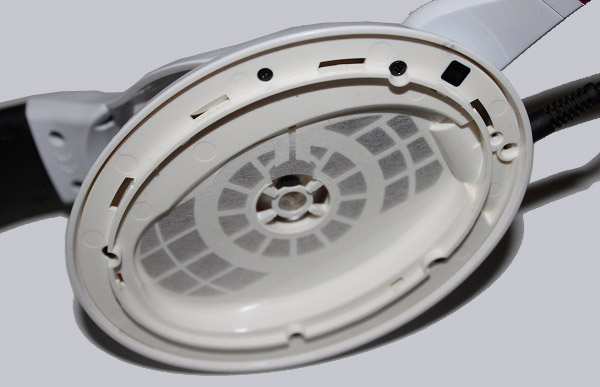 Sennheiser has, however, not made the headband pads replacable. This is in fact glued to the headband, can not be changed and is not offered as a replacement part.

That such a headset must not only look nice but also really should provide good sound, is self explaining. That’s why we’ll come to the next category of our review.

Sennheiser G4ME ONE Operation and Results …