Sennheiser – The Pursuit of perfect Sound This is the motto of the company. Unfortunately, we can only describe visually how good the sound of this gaming headset is. Even this description always includes the personal impression of the listener and is perceived differently by each.

When we plugged in the G4ME ONE for the first time and using the default settings the sound was really bass intensive. Exactly what the headset was made for. Cannon fire, axe and hammer chops and huge explosions leave the gamer’s heart beat faster and find their way directly to the player’s ear.

And where might this better be tested than in the new war simulation Armed Assault 3 – short ArmA 3. Implemented in this game is a howitzer named Scorcher M4, which has a 155 mm cannon. So we move the character about 10 meters away from this and ordered the howitzer to fire on previously specified coordinates. Alone the deep, intense rumble of the diesel Engine should have been warning enough … but what happened next, you just can only be described as POWERFUL. 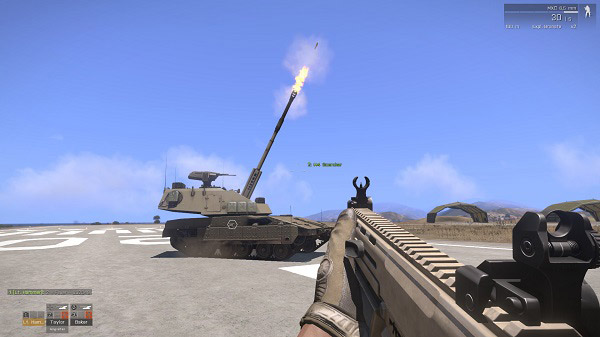 When the shot broke and the barrel, through the recoil went back into the howitzer, the headset produced an explosion so powerful that abruptly straightened all hackles. Even the machine gun produces a metallic sound of the ammunition belts which had previously not consciously perceived. And the 12.7 mm sniper rifle just does not sound like a water pistol but exactly like what it is … brutal!

The voices of the commands were clear to understand and very clean and balanced.

But also when it comes to play music this headset can perform very well. The default settings are a bit bass-intensive, but you can create with some equalizer setting a great atmosphere. This requires correspondingly high-quality audio material for sure. Soft piano pieces played by the G4ME ONE with the same sovereign, such as rocking or techno.

But of course there is still to master a key skill for the G4ME ONE. Because we dont want to hide the most important point from you, for which the Sennheiser Headsets have earned the respect of the community – the microphone.

Here we can finally show you audiophile, how good this headset is performing. Below you can listen to three different audio files, which play records with and without noise cancelling and a recording of a TeamSpeak talk from Mike.

(To listen to the MP3 files it’s necessary to install a suitable Plugin like e.g. QuickTime in your browser.)

As for comfort, we can only tell you our personal feelings here of course. Some people are more sensitive to the ears, others less. There are two ways to wear the Sennheiser G4ME ONE headset. Either completely over the ears, or wearing them on the ears. Both have causes no pain even after prolonged play. The upper padded headband reduced the pressure on the head enormously and thus contributes to a comfortable fit.