When designing the F2-210 NAS, special attention was paid to a reasonable purchase price in order to serve customers who find the F2-221 with Intel CPU or NAS from other manufacturers too expensive. To what extent this circumstance affects the design of the F2-210, we will now examine in detail.

Looking from the front, you can see the two drive bays for 3.5″ HDDs or 2.5″ HDDs/SSDs on the right. On the left is the power button, which has a good pressure point. Above it are status LEDs, which have just the right size and luminosity to be easily recognizable but not disturbing. But since the LEDs are not located behind glass elements at the edge, they can only be read from the front. 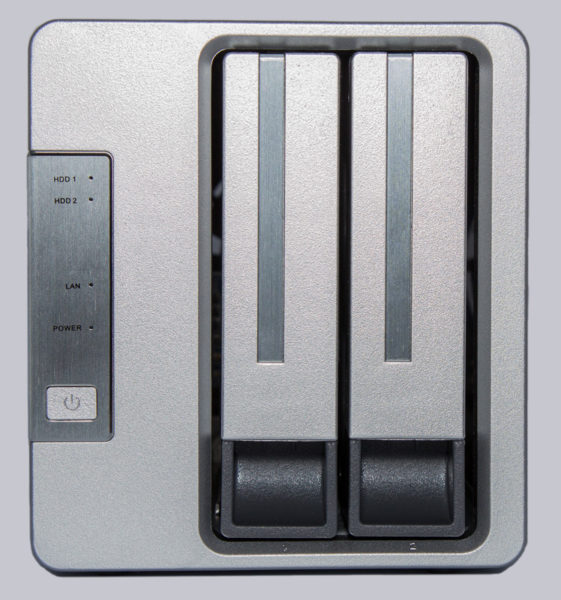 On both sides the TerraMaster logo is clearly visible. The body is made of extruded aluminium and the end parts are made of plastic. The structured lacquer finish is very appealing. All in all, the case leaves a valuable impression. 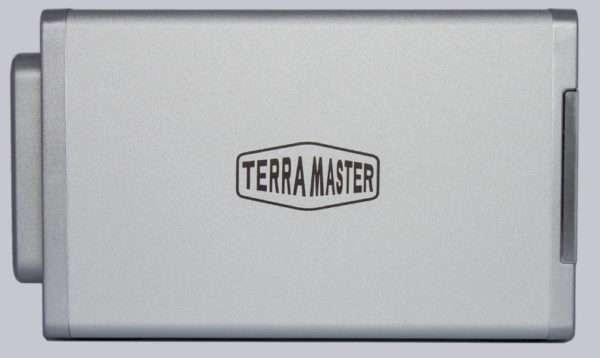 In the back are the two USB 3.0 type-A connections, the 12V DC power connector and the RJ45 Gigabit LAN connector as well as the quiet 80mm case fan. 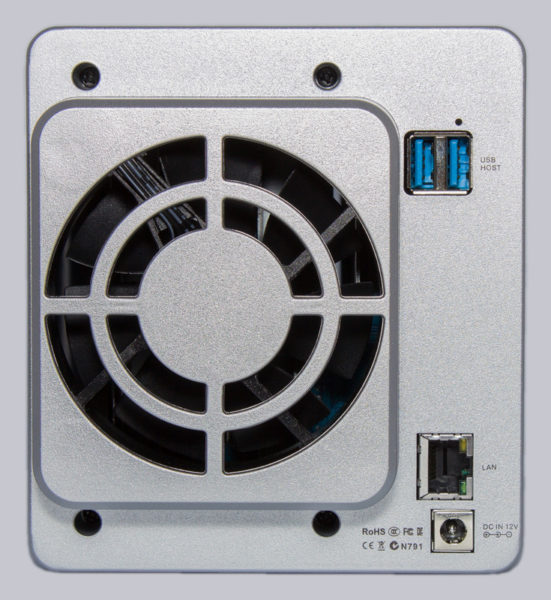 The two drive carriers can be easily unlocked with a small handle and pulled out to the front. 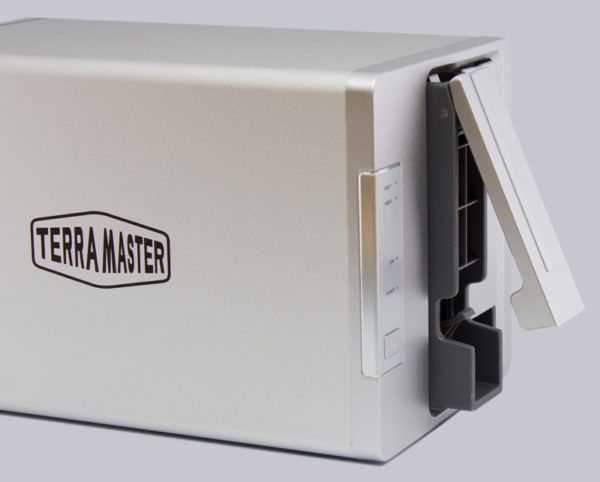 The carriers themselves, as well as all levers and straps on them, are made of hard plastic. Although this does not feel particularly high-quality, it always worked without any problems during the test phase. 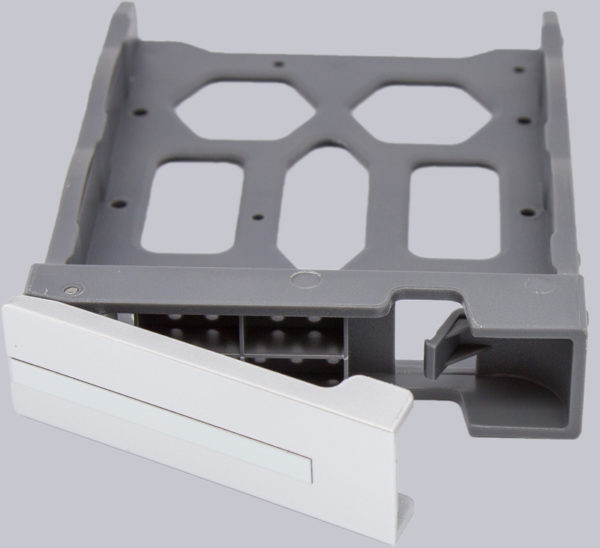 There are markings on the back so that you don’t have to think long about how to place a 2.5″ SSD on the slide, for example. 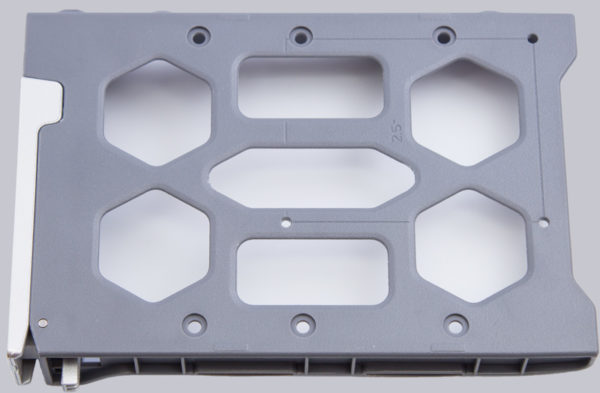 However, 2.5″ hard disks or SSDs can only be mounted with 3 screws, but this is not a real problem. 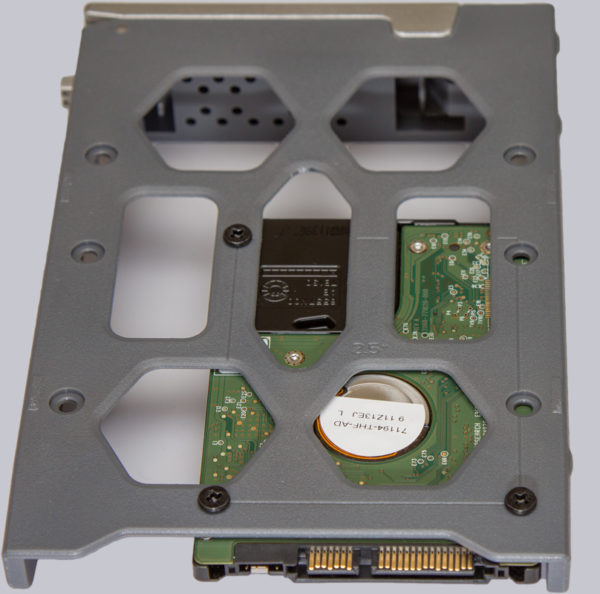 Such a small notebook hard disk almost looks a bit lost in the big 3.5″ sled. But in terms of cooling (and power consumption), the small disks are certainly in advantage over their 3.5″ counterparts. 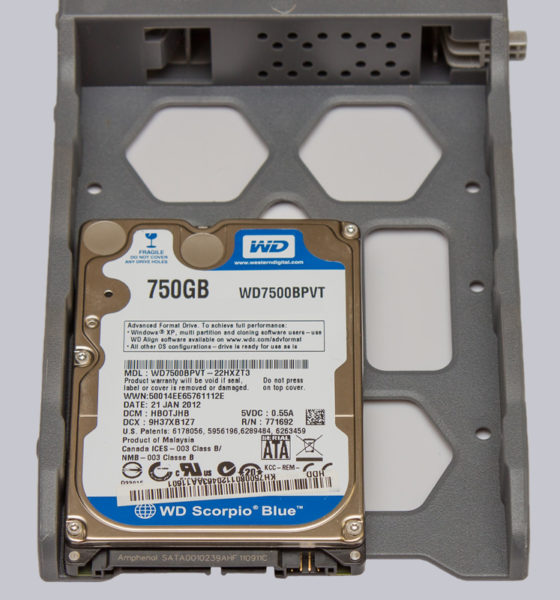 But for really large storage capacities one cannot avoid the structurally larger data media. These then already fill the drive carrier well. Currently, a maximum of 2 pcs. per 16TB large data storage can be used. 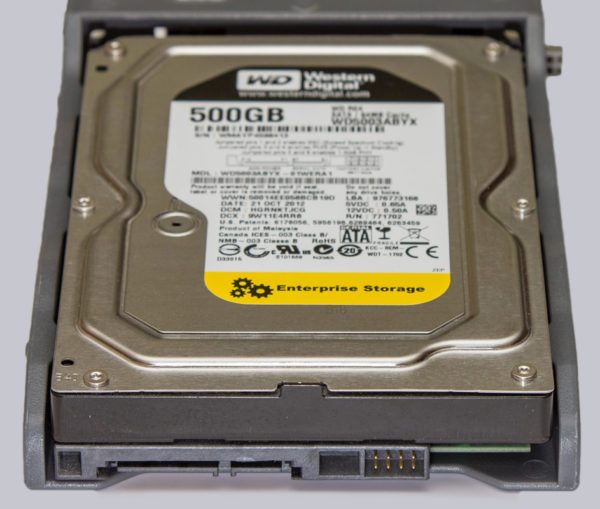 With our TerraMaster NAS model 4 screws could be used for mounting. 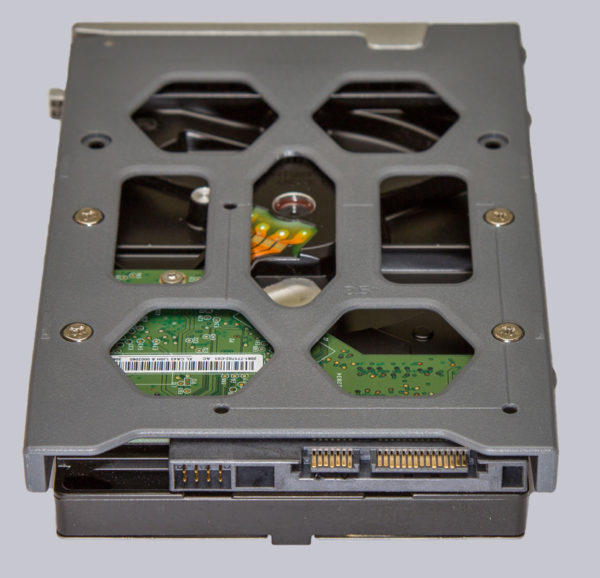 For use in a NAS, hard disks of the NAS storage, server, or enterprise class categories should be used. These are designed for continuous operation. In the home environment, hard drives with low speeds up to 5400 rpm are perfectly adequate. This saves power and keeps noise levels and temperature low.

Before we install the hard disks into the NAS, let’s take a look inside the F2-210. If we look into the drive bay from the front, we can see the support structure made of solid steel and the SATA interface at the very back. Between the two SATA connectors there is a generous slot in the board, so that the case fan can also suck air between the hard drives. 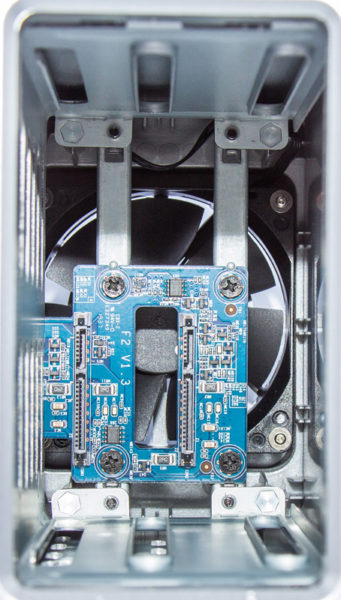 If we now also take off the rear cover of the NAS case, we see the single-board computer, which is the heart of the F2-210. Especially interesting here is that some places on the board are not populated. Obviously a better equipment would have been even possible, but due to the price pressure savings were made here. Further back there are, arranged one above the other, 2 USB type-A sockets, of which the upper one is occupied by a USB stick. During our research it turned out that this is a USB flash memory. It is formatted for Linux and only a PHP7 installer was found on it. Probably this memory stick is used for app installations in order not to occupy space on the hard drives. Unfortunately, the memory capacity could not be increased with an additionally installed USB flash memory, because the installed USB stick was unfortunately not recognized by the operating system – at least not released for the user. RAM and CPU are soldered centrally on the board and therefore not expandable. If it should turn out in the course of use that you want to run several applications and the RAM becomes scarce, there is unfortunately no possibility to upgrade. 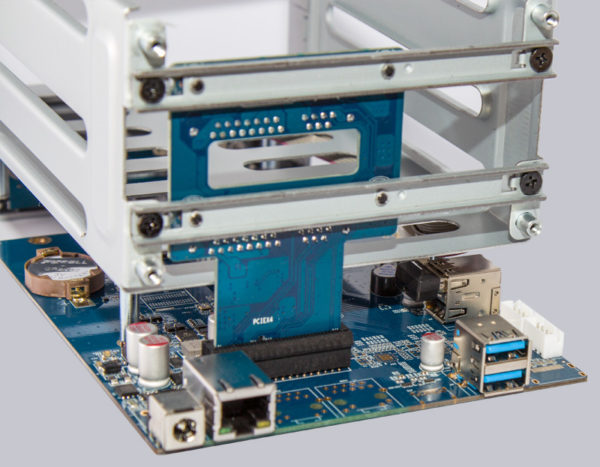 The case fan is slightly offset from the rest of the back wall where the plugs are flush mounted and draws fresh air from the front and bottom through the entire case. There are 4 fan modes selectable in the fan control menu. There are 3 fixed fan speeds to choose from or a smart fan mode where the fan speed is controlled by the NAS depending on the temperature. The smart mode has proven to be quiet and reliable during tests. The hard drive temperatures didn’t reach critical values. 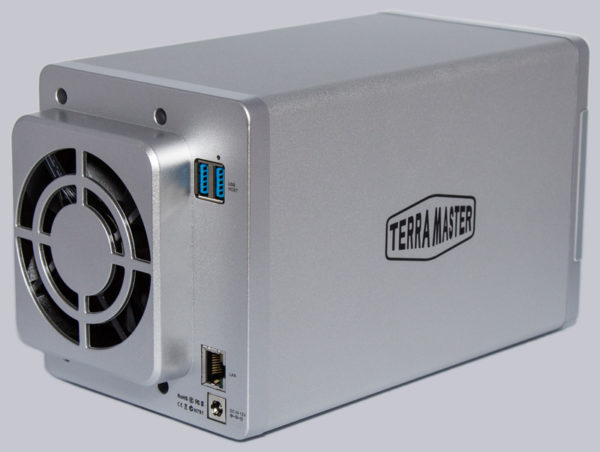 At the front of the drive carriers there are some holes behind the locking lever, so that the 80mm case fan can suck in fresh, cool air from the front over the hard disks.

In combination with the holes in the bottom of the case, this should ensure good ventilation of all components. During the tests the temperature inside the case did not rise above 40°C at an ambient temperature of approx. 23°C. 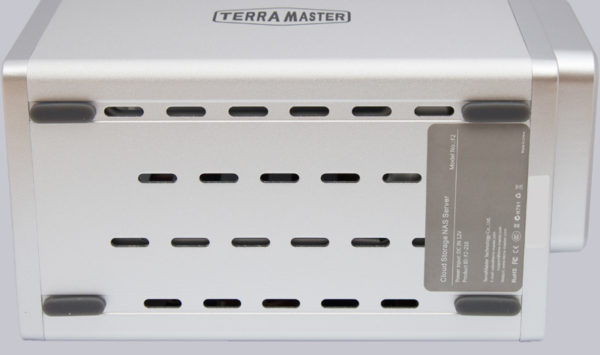 Let’s now move on to the setup of the TerraMaster NAS.