For measurement, the following tools were used: Cinebench R15, Unigine Heaven and SpeedFan.

We first determined reference values without the Massive 20 RGB by giving the CPU in Cinebench and then recording the maximum temperature and the score reached. The same values were determined for the GPU by means of the Heaven benchmark in the FullHD Ultra Preset. In addition, we recorded the maximum noise level while using a dB meter from about 50cm away, which is about the distance of a person gaming with the notebook. 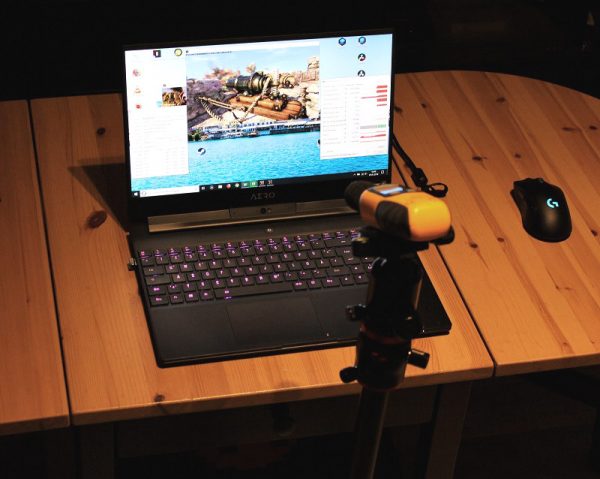 Overall, we went through the following test scenarios:

At first glance, the values are close together. However, if you look more closely, you can see that the CPU finally continues to run into the temperature limit, but achieves this later, which is reflected in slightly higher Cinebench scores, as the CPU later starts to clock down. The GPU can not score higher, but is at least 6-7°C cooler.

A little surprising are the values with fan off. In principle, a notebook cooler should support the existing cooling by optimizing the fresh air supply from below. Here it seems that Thermaltake’s design and mesh grille are already improving the airflow in this notebook so much that the fan does not make much of a difference.

The Massive 20 RGB notebook cooler has no effect on the volume under load. If the cooling of a gaming notebook is at maximum, it is the dominant acoustic factor. However, we noticed positively that the notebook-internal cooling works less in normal Windows operation with additional notebook cooler, which reduces the overall noise level in normal Windows everyday life.

The fan volume is measured with a dB meter also from 50cm distance.

To be able to estimate the fan noise better, there is again a video about it:

Of course, typical for OCinside, we wanted to get a little more out of the way and lowered the VCore to the minimum possible for the CPU using the Intel Extreme Tuning Utility. As we’ve already discovered in the course of the test, the Intel Core i7-8750H clocks itself down at over 80°C to limit the maximum temperature. A reduced VCore should therefor lead to a lower temperature and thus to a longer applied maximum clock. We were lucky with this CPU and were able to lower the VCore by a very good 0.155V, without causing the CPU to become unstable. 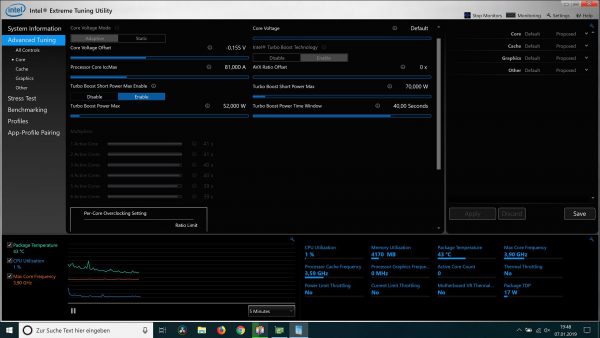 With these settings, we ran two more test scenarios:

The achieved performance increase of nearly 20% at around 10°C less CPU temperature is a great success!

Since the CPU and GPU are connected to the internal cooling via the same heatpipes, the GPU in Heaven benchmark even benefits 2°C of the cooler CPU. As before, the temperatures achieved with the Massive 20 RGB Notebook Cooler are a touch better. A great result.