Get your Notebook operating permanently on turbo mode thanks to liquid metal! In this new tutorial on OCinside.de we have modified a laptop using liquid metal so that the CPU can be overclocked higher thanks to better cooling and can even be operated permanently at maximum turbo clock. In this tutorial, we test the Conductonaut liquid metal from Thermal Grizzly, which has already proven its worth in CPU Delidding. It was worth it!

Many thanks for the support to daniel.

Many people like to use a laptop for their daily work and in their private life. Why not? Mobile devices are now just too crowded with powerful hardware. Multi-core processors, vast amounts of RAM and graphics cards that are absolutely equivalent to those of PCs according to the specifications are now available for respective payment on the go. Unfortunately, not every manufacturer notes that CPU cooling is often not designed for continuous operation at maximum clock speed and therefore the CPU cannot be operated at its performance limit. Because the processor clocks down due to too high temperature and this becomes clearly noticeable with intensive use. In the following tutorial we will show you how to solve this problem by using a different thermal compound on a Dell XPS17 notebook with Intel Core i7-2670QM CPU. With liquid metal, one can not only improve the heat transfer in notebooks, but also replace the much worse heat conducting paste under the CPU’s heat spreader with liquid metal. Provided you have delidded your CPU. Corresponding CPU Delidding Tools can be printed out on a 3D printer or purchased from a specialist dealer. 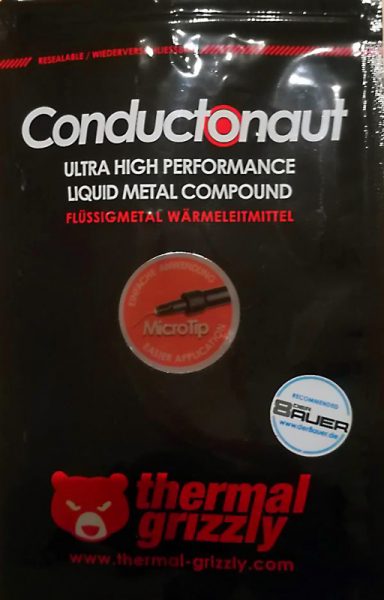 Here you can buy Thermal Grizzly Conductonaut for a good price.

What’s behind all this? …