Of course we would like to introduce the Thrustmaster 280CPX headset first. The body is made of white plastic which is refreshed by green elements. The color combination is well chosen and visually gives a very good impression. 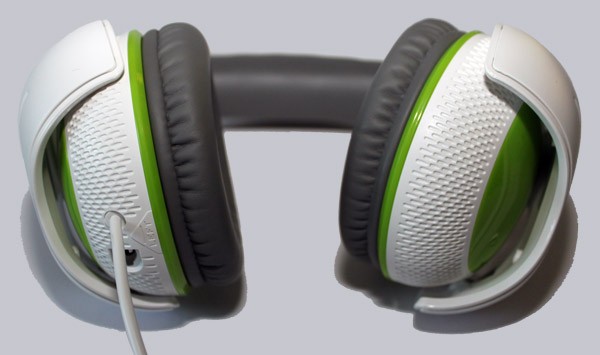 At the headband there is the leather look-alike cushion which comes in the color gray. You can see in the picture also very good, that the two pull-out straps provide sufficient support even for large heads.

Just as the head cushion the ear cushions are also held in gray. They are comfortable to wear even for bigger ears. 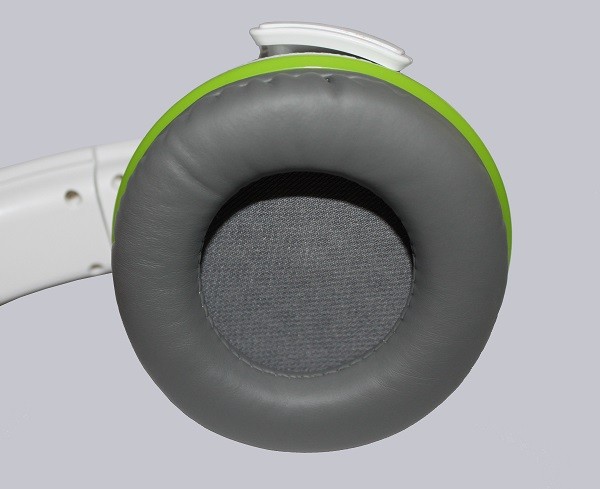 The side view makes it clear that it is a solid headset that, despite its size, has a low weight. 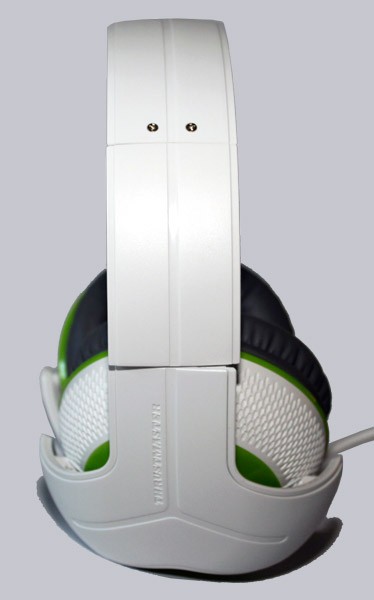 Build into two large brackets are the two 50mm speakers, which provide the necessary sound. In order not to mix up the sides Thrustmaster printed “Left” on the left headphone. Also the 2.5 mm audio jack is there to mount the microphone swivel arm. 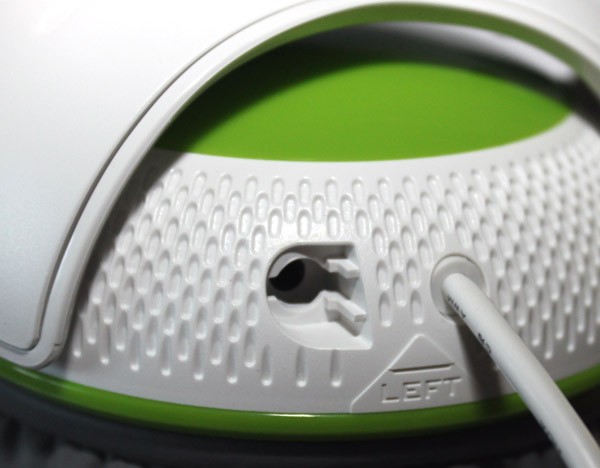 The microphone swivel arm is in the scope of delivery …

… and can be mounted very easily. Unfortunately, the arm does not have a good positioning possibility, so that it does despite bending in the right position turn back from time to time. That would not be a problem with a normal microphone but with the directional microphone of the Thrustmaster 280CPX this is problematic and results partly in a very quiet recording. 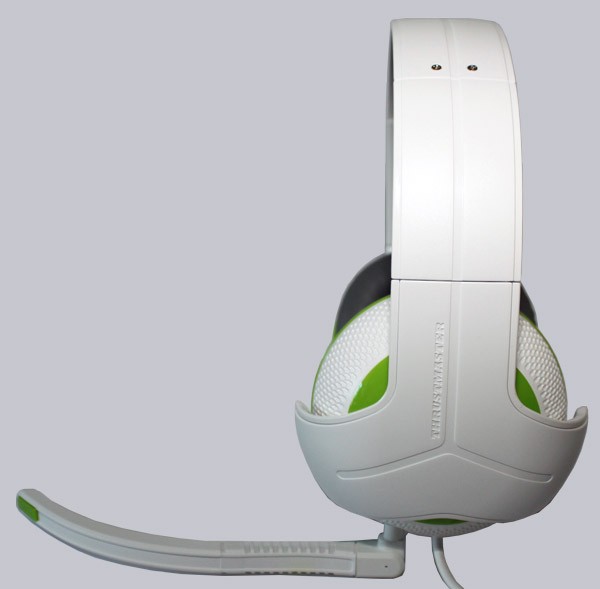 Another point that we did not like so much was the quite short connecting cable of the headset. While it has a clip around the cable to be fixed at the jacket, the cable is with 74.5 cm very short and interferes at least when using the Smartphone. It would have been conceivable an audio cable enclosed with a socket, so as to make smartphone users the wearing little more comfortable.

Now we come to the accessories of the Thrustmaster 280CPX. When adding the connecting cable Thrustmaster really almost considered all eventualities. Even a thin 3.5mm jack-jack cable whose purpose is not described in the booklet. Here we would prefer for example, a 4-pin sockets variant to extend the headset cord. Another slightly thicker 3.5mm jack-jack cable is going to connect the control unit with a gamepad or the microphone jack of a PC. And a cable with 3.5mm mini jack on twice cinch plug/socket for connection to a TV or a game console. 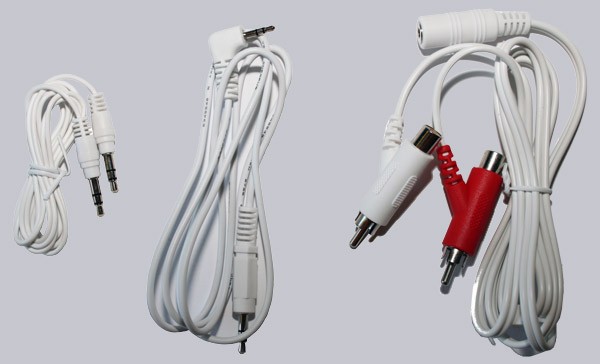 The main part is, however, clearly the control unit. It has a length of 8.5 cm and is 3.9 cm wide at the widest point. Connected unfortunately with quite rigid 3.60 m long cable to the computer and/or the console. 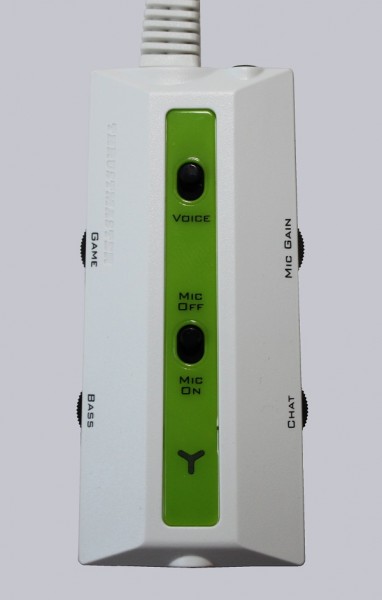 At the end of this cable there is the USB connector and a 3,5 mm audio jack.

On the backside there is a 3,5 mm audio jack which connects the control unit with a gamepad or the microphone-in of the computer. 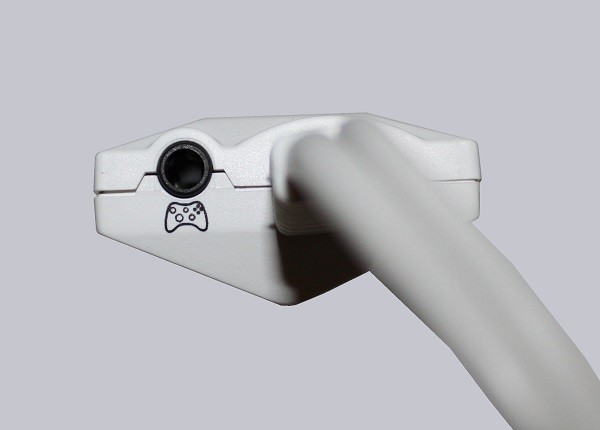 Mounted at the sides there are the potentiometers to control the chat volume, voice recording volume …

… the game volume and the bass level.

On the top there is a button labeled “Voice”. Switching the button, you can hear and monitor your own voice. Because of that the saying: “It´s been probably a long time since your heard your own cries” gets an entirely different meaning. 😉 We also have the option to turn the microphone on or off via the mic button, which is indicated by a green or red led. 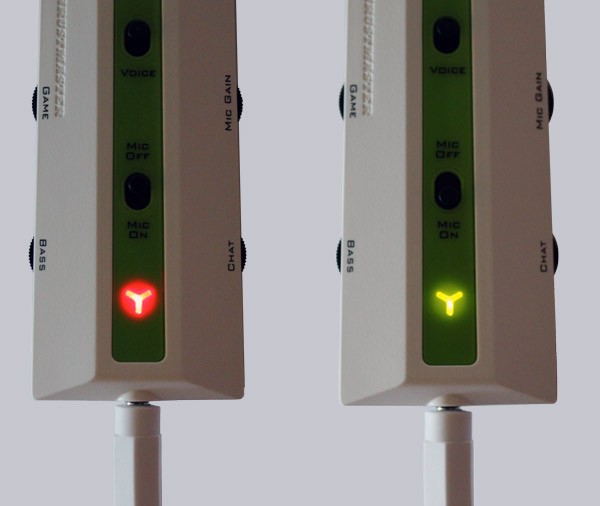 But enough of the technical details. Let us connect the Thrustmaster Y-280CPX with the PC and see how it works.