Since Arctic advertises with multi-compatibility, we took the time to look for an old graphics card in stock. A Leadtek GeForce 6800LE came to light. Beside this old card we also test our Palit 1070ti Dual, which was used for the previous Twin Turbo II test. So we see relatively simply whether the cooling performance has changed to the predecessor.

Let’s start with the old GeForce 6800LE. After we have removed its original heat sink, let’s take a look at the circuit board. 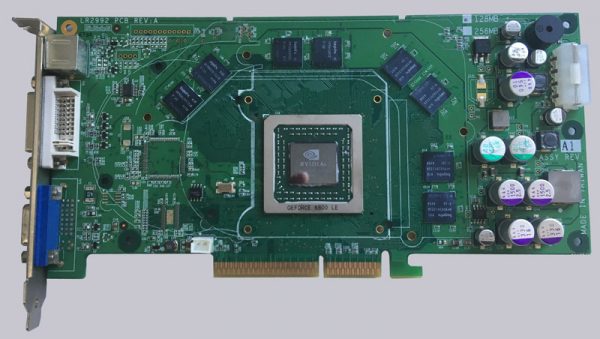 In contrast to the assembly of the Turbo II, we start here with the installation of the GPU cooler. First we look in the instructions which washers are needed for our card and in which holes the fixing screws have to be screwed. 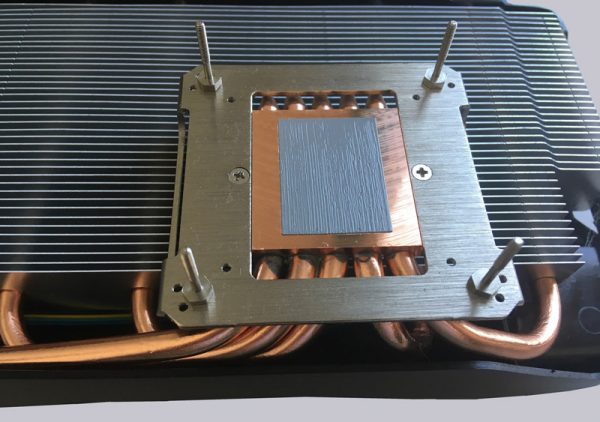 The installation is very easy! As advertised by Arctic, no heat sinks need to be attached with thermal glue, which of course saves a lot of time. 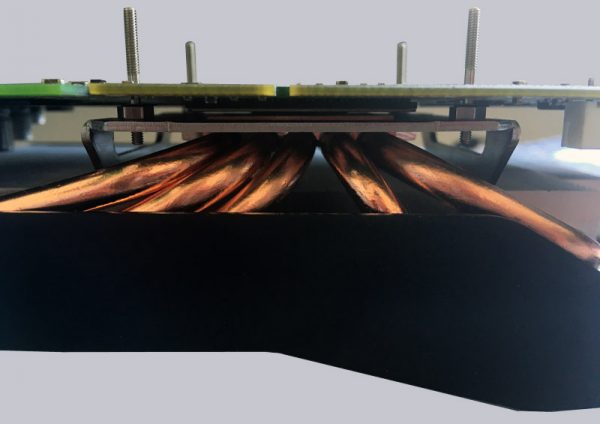 The next step is to attach the thermal pads. Here Arctic delivers enough pads, which are already cut to size. Unfortunately you are faced with the same problem like with the Twin Turbo II: You can guess from the sample drawing where the heat conduction pads have to be attached, but you have to know your card accordingly or search the internet for examples. In the case of our GeForce 6800LE the entire situation didn’t present us with a major problem. 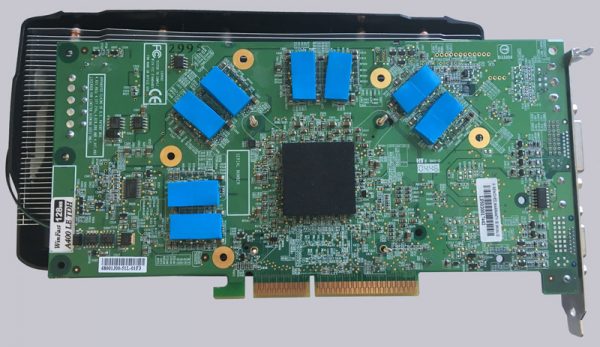 After the pads have been placed on the backside of the board, the backplate is now used. This is simply placed on the back according to the instructions. So that it cannot slip for the final assembly, square mounting rails are used. These are screwed directly to the GPU cooler. The nuts are designed as thumbscrews. 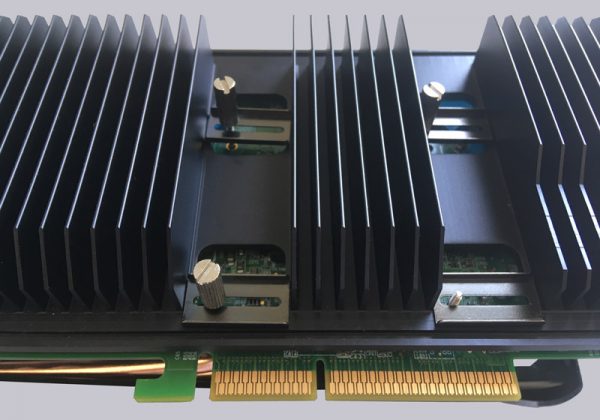 The last step is relatively self-explanatory. The only mounting material that is still available are the 6 clamps. Please note that there are 2 different types. The variant with a screw must be attached to the underside of the card. 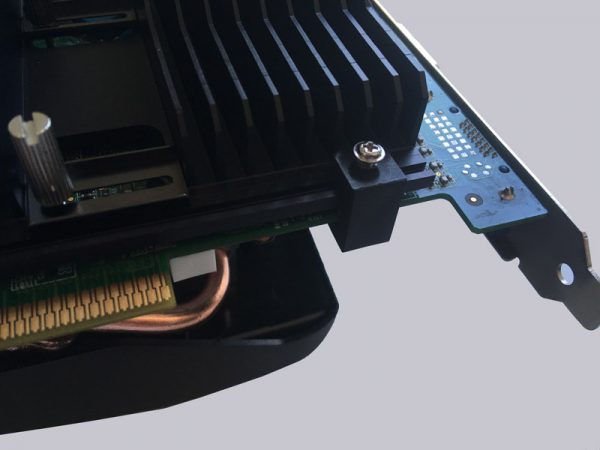 Accordingly, the clamps with two screws are placed on the upper side. After all brackets have been attached, all screws have to be tightened one last time. It is of course important that this is done with feeling, because the old principle applies: “Don’t push too hard!”.

If you look at the card from above, you will notice that it’s much more massive in width than its predecessor due to the backplate. If you use a very large CPU cooler, you can get problems here. It’s the same with the SLI/Crossfire operation. Nostalgics will be happy: To illustrate the problems in an exemplary way, we simply put our converted GeForce 6800LE on an old Socket A ATX motherboard. So if you expect a 2.5 slot design like the predecessor, you will be disappointed. 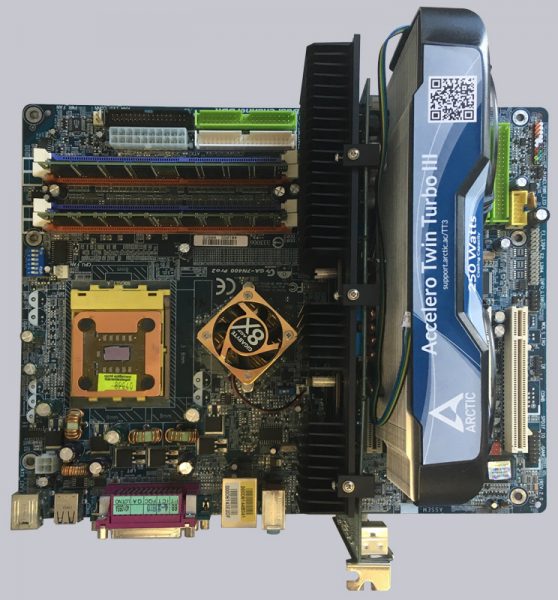 Here another problem of the new system shows up: Since the cooler reaches relatively far down like the predecessor and the backplate on the back does the rest, a release of the slot lock may be a tedious game of skill. 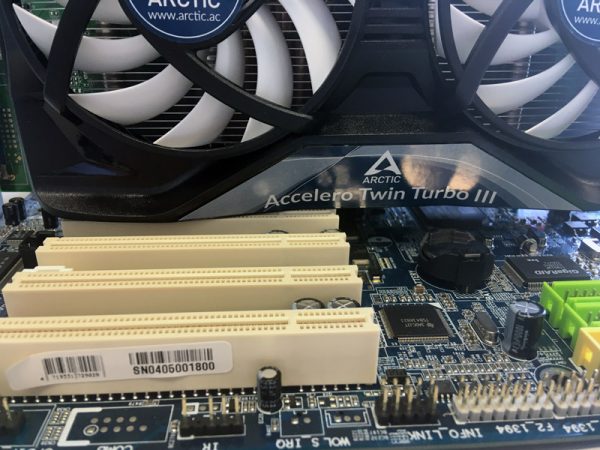 But now enough of old hardware!

After the disassembly, which took place without any problems, we now put the cooler on our Palit GeForce GTX 1070 Ti Dual graphics card. As Arctic promises, we didn’t find any residues on our GeForce 6800LE. As already described before, we first mounted the GPU cooler and then attached the heat conduction pads. As we already knew the places to be cooled from the previous Twin Turbo II review, this went smoothly. 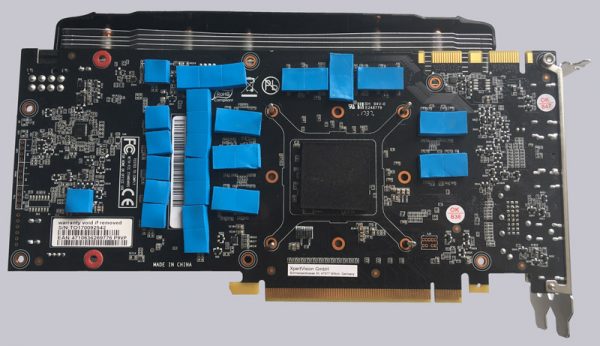 Also in this case we put on the backplate and screwed it to the GPU cooler. 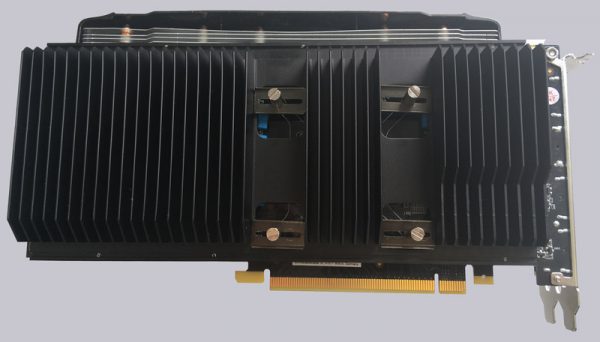 Finally, quickly attach the retaining brackets and the modification is ready. 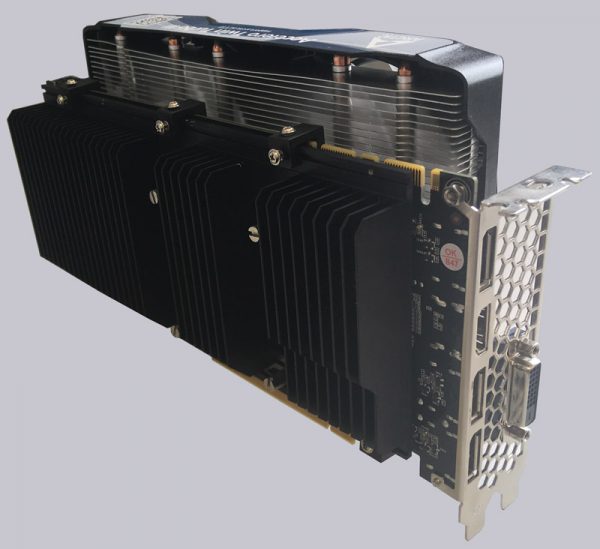 The modification took only 10 minutes, after you knew it from the previous graphics card. If you compare that with the one and a half hours of the Twin Turbo II, that’s a big advantage.

Finally, we would like to mention again that the cooler comes with a graphics card holder. This serves to support the mainboard as well as the board of the graphics card. Since the cooler brings a lot to the scale (810g!) we strongly recommend to install the card with this holder. If you mount it, you clearly have to do without SLI/Crossfire operation with two Arctic Twin Turbo II, as the bracket takes up four slots in width.

So we can check off the chapter assembly and installation so far. Now we come to the practical test.