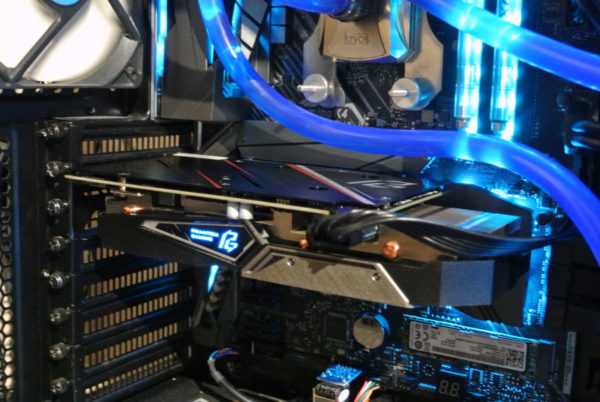 Our test system looks as follows:

We performed the load tests with Unigine Heaven and the somewhat unrealistic Furmark. The graphics cards’ power consumption was determined via AMD’s Radeon software. All tests took place in a closed case.

Let’s start with the RX 5500XT, which has about the same performance as AMD’s old RX 580, but is significantly more energy efficient. As you can see in the table below, it performs consistently at a good level for its price range. With a bit of overclocking we were able to increase the card’s performance by about 4% over all benchmarks. What’s exciting here is that the GPU’s higher clock rate scores significantly more points in 3DMark’s test than in Unigine’s test.

Of course, overclocking and removing the power limits also has its downsides, but in the case of the RX 5500XT these are only acoustic in nature. Our sample could only be overclocked by ~8% at the GPU clock with the AMD driver, after that pixel errors occurred. Under Furmark the card got a bit louder, but otherwise we couldn’t detect anything negative. The 5 Watt higher power consumption is negligible, even if this is of course only the GPU consumption. In our experience, the RX 5500XT, including the remaining components on the graphics card, should draw about 200 watts from the socket under full load. The value of the entire card drops to about 40 watts in idle.

Away from the synthetic benchmarks we have tested the AMD RX 5500 XT in various games like GTA V, Final Fantasy XV and Battlefield 5!

The graphics card delivered a first-class gaming experience in the respective performance class. Of course we also dared to play VR titles. In The Walking Dead Saints & Sinners the card cut a good figure, although with the RX 5500XT one had to make compromises in quality in favor of the FPS. The additional 2 GB memory unfortunately doesn’t help there. The RX 5500XT has 8GB V-Ram, but can rarely or never use it, because the frame rates collapse to an underground level. The ASRock Radeon RX 5500 XT Phantom Gaming is best suited for FullHD gaming.