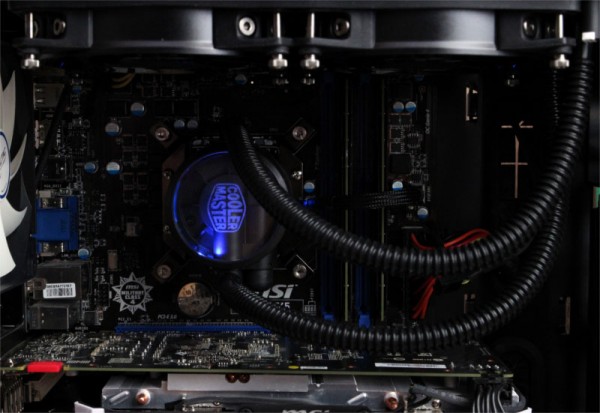 Because the manufacturer not mentioned the switch on the fans, we have decided to work with 2000 RPM. If necessary, the maximum number of revolutions per minute can be increased with a thin tool (a paper clip, scissors) to 2500 U/min.

First, we have tested the cooler with full pump speed. With a PWM signal of 65%, the pump produces a less audible sound spectrum, so we took advantage of this setting for a second run.

Here is the Cooler Master MasterLiquid Pro 240 compared to boxed cooler of Intel’s Core i5-4460. The Intel boxed cooler could be tested not under load in silent mode, because the temperatures to quickly ran out of control. 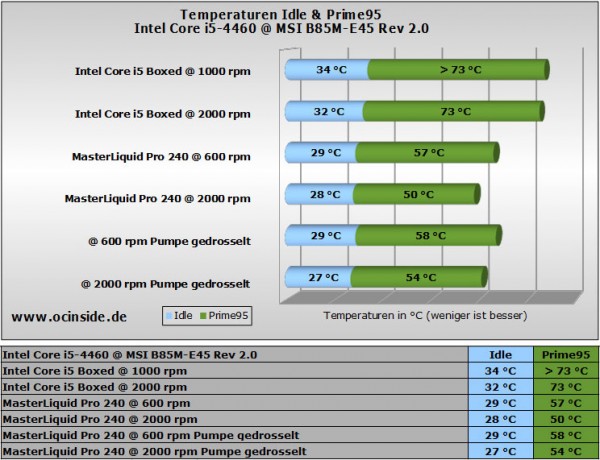 At very low speeds it comes in the pump to babbling sounds, but at higher speeds the pump is heard not outside of the chassis, so that’s no real problem. Only at maximum speed one can perceive the pump, but the noise is not annoying.

In our system the fans themselves at low speeds were very loud, because vibrations despite double decoupling to the chassis were routed, also noticed a strong noise when running the fan. Other users not report this issue and described the fan very quiet, so we assume therefore issue an individual imbalance our samples. We’ve send them to the manufacturer and are waiting for their test results. The airflow is very clearly audible at 2000 rpm, however, this is not surprising.

Without the aforementioned vibration of our fans silent cooling would have been possible thanks to controllable pump.