Let’s start with a fan speed of 1000 rpm to which we have reduced the two fans of the Cooler Master Eisberg 240L cooling via SpeedFan. At this speed, the volume of the fan is very silent and we is not disturbing. Much louder is the pump noise, which is even with the new supplied 9 volt adapter rather noisy. Only a reduction of the pump speed to 40% produced a low sound volume at a slightly lower cooling capacity. So everyone should decide for themselves if the sound volume or cooling performance is more important.

Even with the relatively low fan speed of 1000 revolutions per minute was the Cooler Master iceberg 240L at the top of all previously tested coolers. Below the 1000 rpm one should not go with higher heat output of the CPU, because this significantly drops the cooling performance.

At the highest speed of 1600 rpm is the Cooler Master 240L water cooling still very quite and remains both the sound volume and the cooling temperature well below Antec H2O 920 LCLC water-cooling device. A compromise between good cooling performance and a reasonably low noise would be from at least approx. 1000 rpm fan speed in combination with the included 9 volt adapter to 2900 rpm pump speed or better a bit lower pump speed via a motherboard fan control for pump noise reduction.

Here are the temperature results in idle: 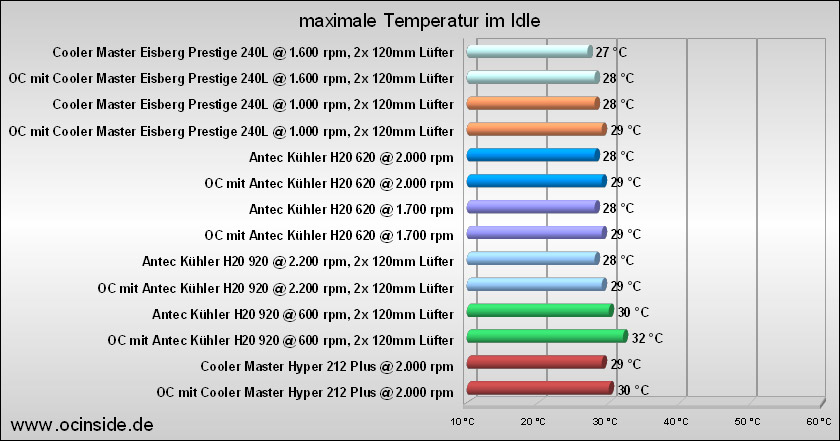 Here are the temperature results are at 100% load: 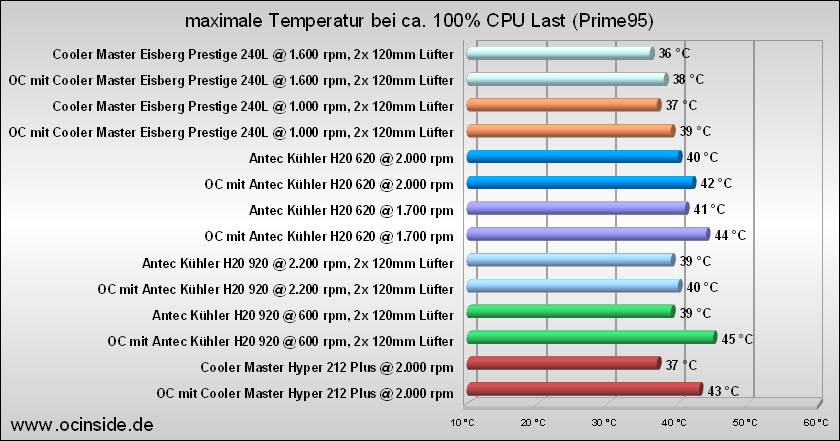 And here are all temperature measurements in tabular comparison: