Enermax promotes the RGB fans with promises. The HALO RGB LEDs should be characterised by uniform and particularly bright lighting with countless effects, which can be controlled via a remote control or synchronised with an RGB mainboard. In addition there are Enermax patented Twister bearings, vibration damping rubber buffers and an extra long MTBF of at least 160,000h.

The fan blades are removable for easy cleaning as usual with some Enermax fans. A little fingertip feeling is necessary to avoid damaging the rotor blades.

Tip:
If you know how, the disassembly of the fan blades is relatively easy: Simply hold the fan frame with both hands and then place the thumbs from behind (i.e. with the technical data) on the rotor blades, as close as possible to the center of the fan. Now simply press evenly with both thumbs until the small resistance is overcome with a slight “crack”.

The fan blades are not profiled. The front carries the Enermax logo, on the back of the fan basic technical specifications are listed once again (type designation, RPM, power supply). 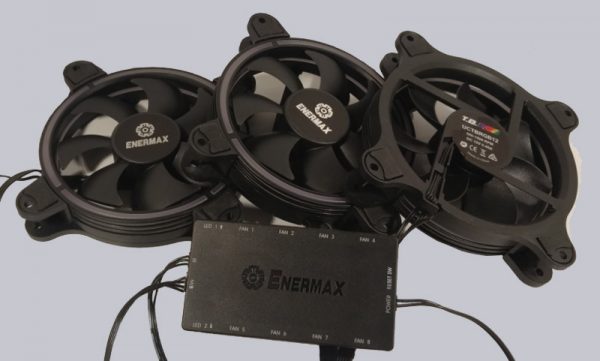 The fans are connected to the enclosed controller via a 6-pin connector (DC and RGB signal). The setting of the fan speed and LED control is done simultaneously for all fans. The speed of the fans can only be controlled in 7 steps via the remote control, a dynamic adjustment via the system temperature via PWM or DC is unfortunately not possible.

Power is supplied directly from the power supply unit via a Molex adapter. The connection is looped through so that no power connection is lost on the string. Here you can see the schematic view from the leaflet. 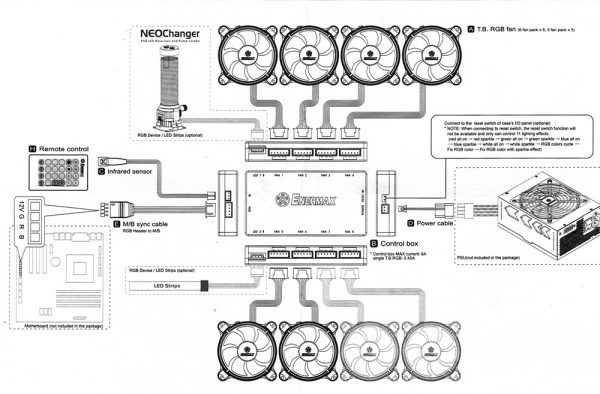 The infrared sensor for the remote control is also connected directly to the controller with its cable. The sensor should be mounted in such a way that there is a good visual contact to the remote control. During the test, the sensor already had slight difficulties if the remote control was pointed at it from an angle that was too steep. Optionally, a reset switch can be connected via a 2-pin connector to switch between 11 preset lighting effects.

Via a 12V RGB connector cable (4-pin) the controller can be connected to the RGB connectors of a correspondingly equipped mainboard and the LED control can be synchronized via the board (AuraSync, Mystic Light Sync, etc.). The controller also has two further connectors for 12V RGB strips or other compatible RGB peripherals, which are then also controlled via this. 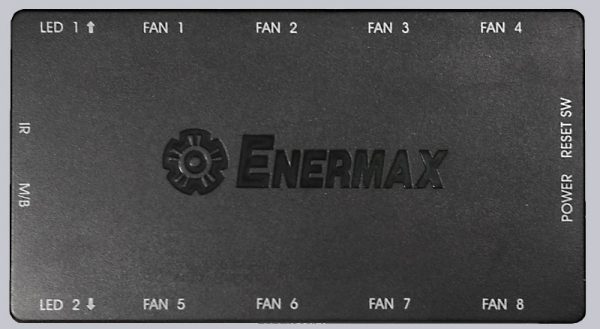 The fans are designed so that three “light rings” can be seen from the side, as well as another ring on the front. 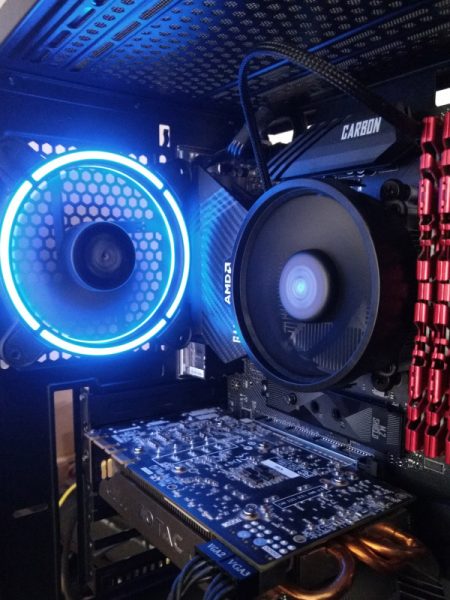 The illumination is indeed extremely uniform and even at maximum brightness Enermax makes no false promises. 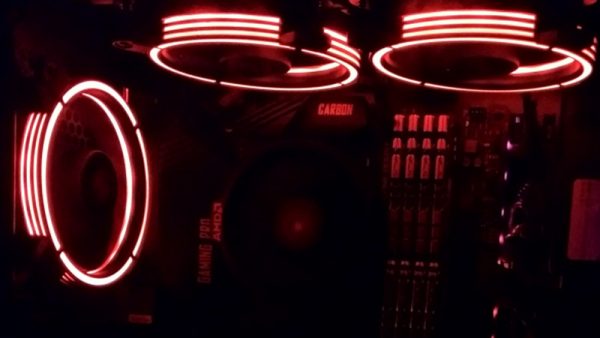 The screw sockets are enclosed in vibration damping rubber buffers. The openings for the screws do not have a thread, which is only cut in by the screw. Compared to the T.B. Silence ADV fans this is not a big problem with the T.B. RGB fans, because the plastic frames are much softer than with the ADV models.

A total of 10 colours with 4 different effects can be set via the remote control. In addition, the brightness can be adjusted in 5 steps. Alternatively, there is an RGB change function, in which the colour spectrum is run through very smoothly, the colour run can be stopped at a “favourite colour” and the various effects can be switched on.

Unfortunately, a combination of the RGB color run and the effects does not work. Also adjusting the brightness only works with one of the defined colors. All in all, the promised “variety of effects” is limited a little. Another disadvantage is that all fans (and RGB elements connected to the controller) are always connected in the same way – color animations cannot be done with the Enermax controller and free programming is also not provided.

Despite these limitations the Enermax RGB 3 Fan Set is really impressive. In the following video some of the different effects are shown.

The most interesting thing for most people is the possibility to control the RGB effects by synchronizing them with the mainboard. Depending on the motherboard used and the software supplied with it, numerous additional effects can be set that are not possible via the remote control. The MSI Mystic Light for example offers the possibility to display the system temperature via the LED color coding or to integrate the LED fans into effect animations of the board. If the colors don’t match, you can swap them.