The FlexCage was installed for testing in a standard 19″ housing with two 5.25″ bays and an AMD FM2+ system. A new 2TB Toshiba HDD and older hard drives, which tend to produce more waste heat, with 250GB and 320GB from Samsung and Western Digital were installed. 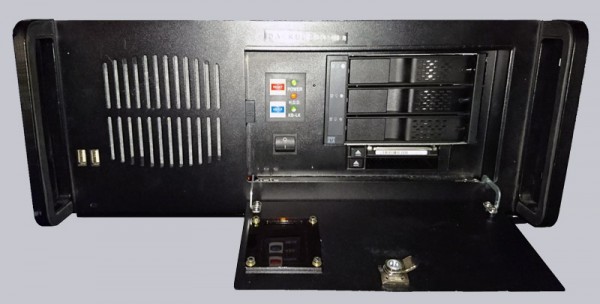 The initial operation was – as usual for IcyDock and expected in this price range – thoroughly unproblematic. Everything fit right away, no sharp edges, in short: that’s the way it should be! The hard drives are held securely in place, there is no theft protection.

To test the temperatures, all case fans (except the power supply fan) were deactivated, so that only the 80mm fan has to suck the air through the FlexCage.

The fan does this very well, the hard disks are all between 28 and 33°C warm. Even after a half-day data transfer on all HDDs, the temperatures hardly increased noticeably (maximum by 3°C; room temperature was 21.2°C).

Unfortunately, this good cooling performance is bought by a deafening noise reminiscent of a starting tornado fighter jet or a pack of young dogs in a ball pool.

While the FlexCage is designed for the consumer area, the fan is intended to be installed in a soundproof data center. Since the fan can be exchanged for almost any commercially available 80mm 2-pin and 3-pin fan, fortunately this is not quite as tragic.

After the exchange against an almost hardly audible fan, the Xilence Red Wing with 15db(A) and 1500rpm, the temperature hardly rose appreciably (30-34°C in idle; 33-41°C under writing load). 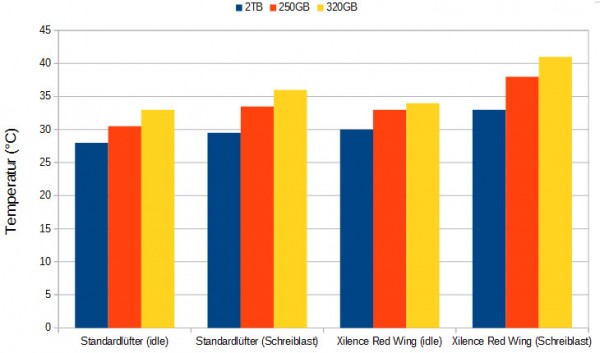